Maintaining a healthy, long-term relationship involves many different aspects. While love alone will get you through a number of years, eventually some kind of repetitiveness and tedium will ensue, especially in the bedroom. This, however, doesn’t have to be cause for concern. The truth is that every couple experiences highs and lows (or ruts as they are commonly known). However, sometimes your sex life may need a kick up the rear to bring it back to life.

The good news, and we mean very good news, is that there is no shortage of ideas for reigniting your trysts between the sheets. If one idea doesn’t work for you, there are always plenty more out there to try. (May we recommend one of the best sex toys of all time?)

One of the most popular ways to get the fire going again is by playing sexy games. Whether you take an existing game you have and give it a sexy spin or discover a whole new game made specifically for the purpose of getting things hot and steamy, sitting down together knowing where it’s going to end up is often almost enough of a turn on itself.

To point you in the right direction, we’ve put together a list of the 16 best sex games for couples. These games include:

Most of these sex games have different levels depending on whether you’re looking for more romance or pure passion. Find the one that sounds most appealing to you and, in no time, you’ll be back on the good foot doing the bad thing.

With over 400 different seductive ideas for you to try, the Creative Conceptions Monogamy Board Game is a fun way to reconnect and try new things with your partner. The dynamic game involves three different levels of progressive play, namely intimate, passionate and steamy. As you land on the monogamy square, you’ll take a card and discover which task you’ll be performing. There are also 50 fantasy cards that can be part of the game itself or used as a fun way to create a night to remember.

Love oral sex? Then the Kheper Games Oral Sex Card Game is the choice for you. There are three different ways to play and over 100,000 different fantasies to be played out. Included in the game are 25 different cards for him and 25 for her, meaning there’s plenty of enjoyment to be had for everyone. No matter how many different positions you’ve tried, you’re sure to discover something new with ideas including “double his pleasure,” “the cowboy” and “curtain call.”

Sure, you could get your partner a new pair of shoes, a piece of jewelry or an electronic gadget, but wouldn’t it be more fun for both of you to give 12 different sex games this Christmas? That’s exactly what you can do with The 12 Sex Games of Christmas. The box includes fun, themed games, like “Please Go Down for Christmas,” “Oooh Santa Baby,” and “Rudolph the Romantic Sex Slave.” While they may have taken things a little too far with the last one, you’re sure to have a spicier holiday with this game in the closet. And, if you and your friends have this type of joke-filled relationship, this might actually make a hilarious white elephant gift, too. 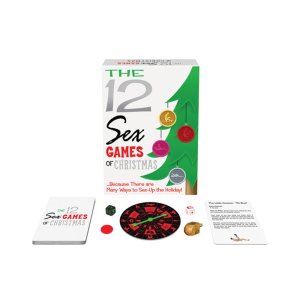 The Kheper Games Glow in the Dark SEX! Dice Game keeps things straightforward and simple. Rules are limited and can be made up by the players, but it essentially always boils down to completing what you roll on the dice. Included in the set are three different dice, with a pair for positions and one to show you how long the chosen position should last. The set makes a great surprise gift for your partner or a fun novelty gift for friends and newlyweds. 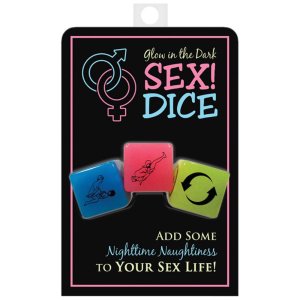 Get to know your new partner a bit better through the Full Disclosure Strip, Truth or Dare Game for Lovers. In this game, you’ll find 120 cards full of truth questions and naughty dare moves. In addition, there’s a spinner that tells you when to strip and exactly how to do it. Not only will this game lead to hot and steamy sex if you play it right, but it will also help you to learn more about your partner’s past and his or her desires. In addition to the basic truth-and-dare structure, the game also includes “naughty extras,” like a Bonus Sex card, to keep things fresh and wild. 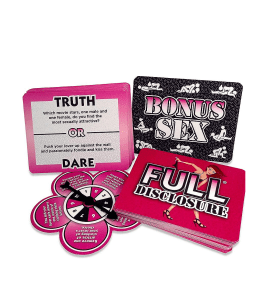 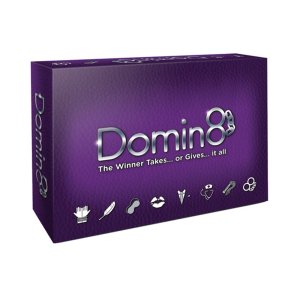 8. Kheper Games The Spirits Want You To Have Sex Game

BEST FOR DETERMINING WHAT YOUR PARTNER REALLY WANTS

If you’re sure your partner wants to try different sex positions but is too bashful to ask, we’ve got the perfect sex game for you. The Kheper Games The Spirits Want You To Have Sex Game is based on the design of a ouiji board. If you remember messing around with a ouiji board as a young teen, you’ll know that it’s really the players moving the game piece, deciding what the spirits are saying. And, unless the spirits actually move you, this sex game acts in the exact same way, allowing you and your partner to try new things without actually needing to ask for them explicitly. 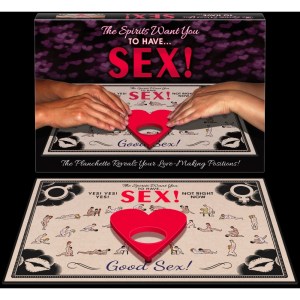 Image courtesy of Walmart
Buy: Kheper Games The Spirits Want You To Have Sex Game $18.00
Buy It

As one of the best sex games that’s actually a board game, the Oral Fun Board Game can be a fun addition to any night in. The goal of the game is to race to square 69, answering adult-orientated trivia questions and completing oral tasks along the way. You might have to give oral treats, drink or blindfold and pleasure your partner during gameplay. The creators of the game recommend bringing along some flavored lube, small edibles, ice cubes, a blindfold and an alcoholic beverage to the gameplay. Ideal for two players, this is one sex game you won’t get bored of quickly. 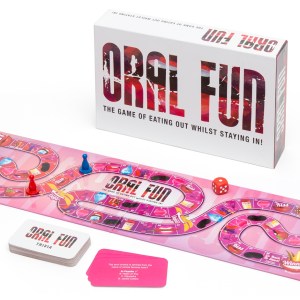 The Our Sex Game doesn’t look like a traditional sex gimmick. It’s not covered in lewd images and doesn’t have a red and black color scheme. Instead, it’s full of bright colors, although it does have a giant S-E-X written across the game board. Still, it was this uniqueness that persuaded us to include OSG on our list of the best sex games. Gameplay begins on the “S” which represents seductive. It then moves on to “E” for erotic and, finally, “X” for X-rated. When a player lands on an OSG square, he or she picks a card and acts out the scene on that card. We’ll be surprised if you get to the end of this game without ditching it in favor of a steamy encounter. 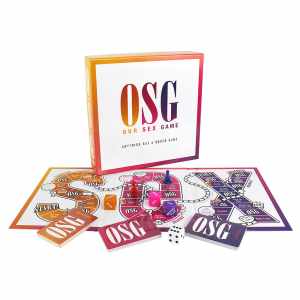 Image courtesy of Babeland
Buy: Our Sex Game $24.99
Buy It

Dare Duel is a fun game for couples and everyone else, too. No matter your gender, sexual orientation or relationship status, this versatile game comes with rules for two people and more than two people as well. The game entails taking turns to draw cards and putting together words and phrases from the cards to create your choice of fun, romantic or sexy acts to perform. In addition, you’ll battle your fellow players for who has to perform the act. There are hundreds of different words on the cards, giving near-endless possibilities, so every game is truly unique. Arm yourself with your favorite couple’s sex toys and get ready for a sexy game night.

12. Sex and Intrigue Board Game

If you want a sexy and steamy board game that you can play with friends and that won’t lead to a giant orgy, try the Sex and Intrigue Board Game. This hilarious version of Clue allows two to eight players to determine who is doing who and where in the No-Tell Hotel. The winner of the game will need to reveal which two characters were involved in the sexual encounter, where the encounter happened, what sex toy were they using and which position were they in. The character names and pretty much everything else about this game will have you and your friends laughing out loud. 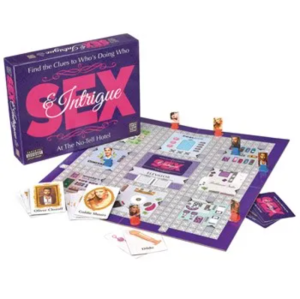 Image courtesy of Adam & Eve
Buy: Sex and Intrigue Board Game $29.95
Buy It

Love Honey is one of the best places to buy sex toys online, and the retailer’s Oh! Fantastic Foreplay Board Game has taken all the best things about foreplay and put them into one sexy box. Lovehoney really took the time to do their market research when designing this sex game. Inside the box, you’ll find a board game with three levels to complete, from foreplay light to true raunchy behavior. Each player rolls the dice to reveal a question. If they don’t want to answer the question, they’ll need to complete a saucy forfeit to stay in the game. In addition to the board, cards and dice, this game also includes a blindfold and a tickler to add to the fun. Just be warned, this game isn’t for the bashful. 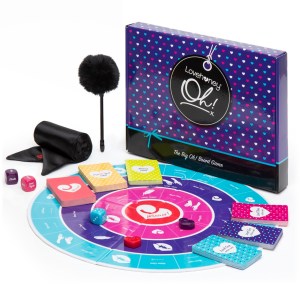 Discover a part of your lover that you haven’t explored before with Nookii: The Hot Game for Passionate Lovers. The board game takes players through three different levels of intense sexual encounters. It starts with “Mmm” cards to warm up with teasing and touching. It then moves on to the “Ooh” cards for role-playing, and, finally, the game ends with “Aah” cards which instruct players through more direct sexual acts. The action on the cards is limited by a time limit, which is determined by the number you roll on the dice. In addition to the game itself, Nookii also includes a silk blindfold, a timer and a “Do Not Disturb” sign for your door. 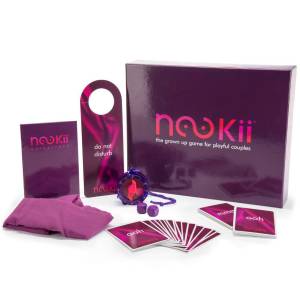 Whether you’ve been in a relationship for a week or 30 years, the 3DP Fusion, Inc. Sex Stack includes a number of unique elements that will have you hot and ready to go in no time. The stack looks similar to a normal game of Jenga, and the aim remains to not have the pile fall when it’s your go. However, each block has a number printed on the side. These numbers correspond to numbers on the included printed activity cards, which feature fun tasks ranging from “teasers” to “hardcore” in intensity. 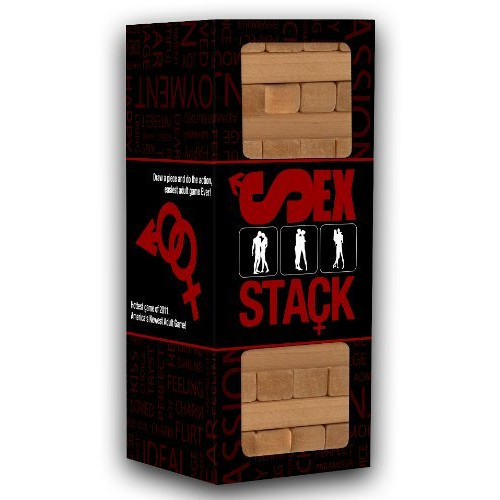 BEST FOR GETTING OUT OF YOUR SEX RUT

If you’ve been searching for a way to put some spice back into your love life, then the Shared Sweat LLC Secret VII Adult Card Game could be your answer. It lets you take control of your foreplay using the color-coded pleasure cards. Each of the 400 cards is ranked from mild to wild, depending on your desired level of intimacy. After picking seven cards each, you’ll then take turns to roll the dice and find out which act is going to be performed next. The winner gets all seven cards performed on them . . . if you even make it that far.