Let’s be real: wearing the average condom can be a bummer during sex. But it doesn’t have to be, if you invest in the right safe sex equipment. Much like a car seatbelt or bike helmet, the real reason for wearing a condom isn’t because you enjoy it. The answer is safety. The best condoms provide a physical barrier between you and sexually transmitted infections (STIs) and unintended pregnancy.

However, this protection comes at a price in the form of lessening the physical stimulation you feel. This is why many people find sex with a condom to be undesirable, and in some cases, off-putting. For this reason, we suggest switching to the thinnest condoms to restore that natural feel while remaining protected.

The thinnest condoms work exactly the same way regular condoms do. They simply sport thinner walls to increase the amount of sensation. This means you get to enjoy the same level of protection during sex without the loss of physical sensation.

No matter whether you’re using the thinnest or the thickest condom, it’s unlikely it will break if it is being used correctly. Thin condoms, like standard-thickness condoms, are built to endure the stresses of sexual intercourse, including repetitive thrusting.

If you’re finding that condoms break on a regular basis, it’s more likely that there is an additional reason for their failure. These may include:

Beyond these factors, it’s also important to remember to leave a 1/2 inch of space at the tip, to prevent stretching and potential breakage.

Always having a condom on hand (and knowing how to properly put one on) is an important part of sex etiquette – you never want to leave a partner feeling uncomfortable when you’re main mission is to turn them on.

Below you’ll find our top 13 thinnest condom picks. We scoured the web to find products that almost feel invisible in the heat of the moment. Each option is well-reviewed and available for home delivery. Find your favorite and come close to restoring that more appealing, skin-on-skin feeling you’ve been craving in your sex life, whether it’s for casual encounters or your long-term lover.

These TROJAN Bareskin Thin Premium Lubricated Condoms come backed by rave ratings from happy Amazon users. Each box of these popular condoms contains 24 pieces which are all 50% thinner than Trojan’s Ultra Ribbed Ecstasy Condom. They contain a silky smooth lubricant which adds comfort and sensitivity during use. Furthermore, the condoms are constructed from premium-quality latex and include a special reservoir at the tip to further reduce the risk of accidental pregnancy and sexually transmitted infection (STI) transmission. 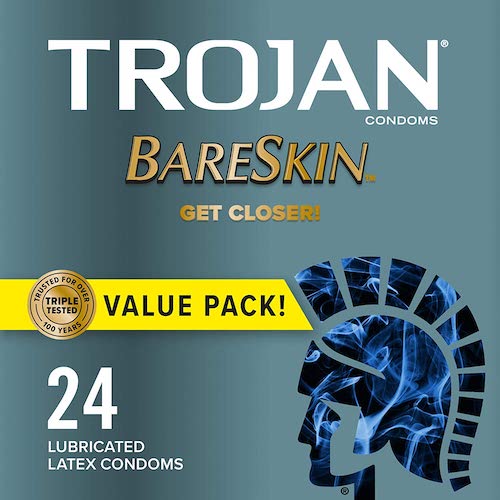 There’s nothing worse than that noticeable latex smell, and P.S. Condoms made sure that was one of the first things they tackled when engineering their smoother, thinner, and genuinely scent-free condoms in regular and XL sizes. Unlike many condoms which contain casein, an odorous form of dairy, this formula is completely casein-free, but still very durable. Buyers report that this improves their safe sex experiences – especially if their session includes oral. Although it’s generally considered safe to use with silicone toys, there is a small amount of silicone in the condom’s lubrication, so keep that in mind. 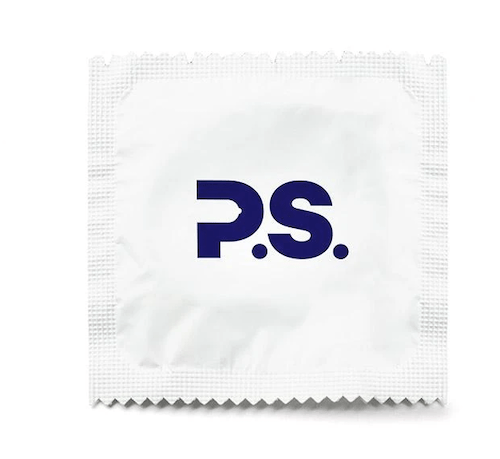 The SKYN Elite Non-Latex Lubricated Condoms are a great option for anyone with an allergy or sensitivity to latex. The ultra-thin design, which is 20% less than original SKYN condoms, offers a near skin-to-skin contact feel for users. They are made from SKYNFEEL, a non-latex soft material that is equally as strong as latex, without the potential reaction. In addition, the condoms include a reservoir end and lubricant, which helps wearers last longer and feel more comfortable. 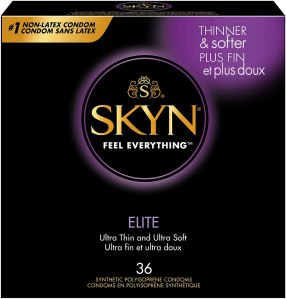 CautionWear’s condoms tick all the boxes for users with a small size. There’s no shame in having a smaller penis – after all, it’s not about the size of the boat – it’s about the motion of the ocean, and there’s nothing sexier than a man confidently owning it. The Iron Grip condoms are slightly shorter and thinner than the average condom, offering a perfectly grippy fit. Baggy condoms don’t just feel terrible during sex, they’re dangerous as you risk them sliding off during a session. They’re lubed up with waterproof silicone, and each box comes with 12. 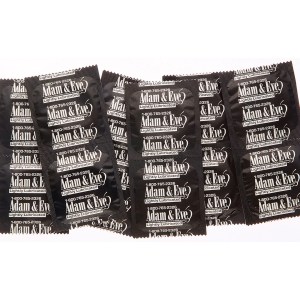 The goal of a thin condom is to feel like there is nothing between you and your partner. By combining an ultra-thin design and lubrication, these LifeStyles Ultra Sensitive Natural Feeling Latex Condoms achieve one of the most natural feeling experiences on our list. The condoms, which come with over 6,500 five-star ratings from users, are made from a high-quality, low-scent latex that has been rigorously tested to give you confidence in their ability to prevent unwanted pregnancy and STIs. Additionally, the design features a flared shape to enhance sensitivity as well as greater comfort for the wearer.

Related: Best Condoms For Her Pleasure 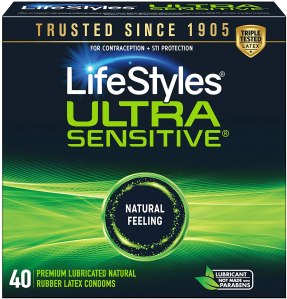 If you’re searching for the most sensitivity possible when wearing a condom, these Durex Invisible Condoms may be the right option for you. As the name suggests, these near-invisible condoms are ultra-thin and provide wearers with maximum sensitivity during intercourse or play. They are made from a natural rubber which is also lubricated for added comfort. Furthermore, for greater reassurance in their ability to prevent pregnancy and STIs, each pleasant-smelling condom is electronically tested. 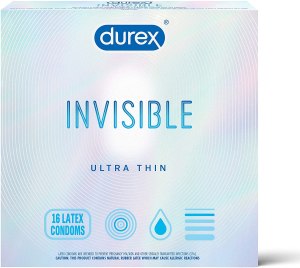 By testing these ONE Vanish Hyper-Thin Condoms three times, ONE is able to present a condom ideal for users who always have accidental pregnancies and STIs at the back of their minds. The condoms are made from ultra-thin, super-soft latex which delivers a sensation-filled experience for users while also protecting them from transmitted diseases and pregnancy. The condom design includes a reservoir tip and comes prelude to provide a more comfortable experience for everyone involved. Plus, each purchase comes with a voucher to claim a handy free storage case. 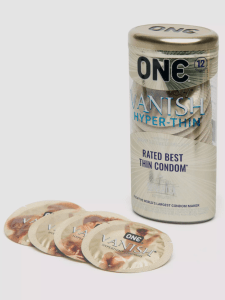 If you’re a bit larger than the average man down there, you’re going to need a condom to suit. These Trojan Magnum Bareskin Large Size Latex Condoms take care of the larger-than-average size while also sporting an extra thin thickness to deliver a sensation-filled experience for wearers. The luxury condoms are made from premium quality latex and have been electronically tested for trusted reliability. In addition, each condom in the 24-piece box features a contoured shape, a special reservoir in the tip and a tapered base for greater comfort and security when on. 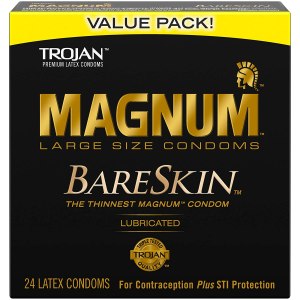 As Durex’s thinnest condom, the Durex Air Condoms Latex Condoms deliver on their promise of maximum sensitivity. The extra-thin condoms are made from high-quality latex which is durable, strong and has a pleasant scent. Each condom inside the 36-piece box has been rigorously tested five times so you can trust in its reliability to prevent STIs and pregnancy. They have also been lubricated to further lessen the chance of breakage during use. Furthermore, these well-reviewed condoms are delivered to your home in discreet packaging if you’d rather no one knows what’s inside. 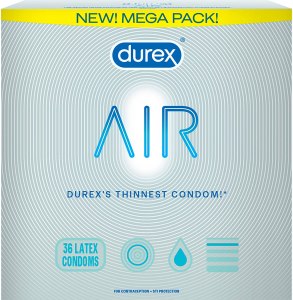 These OKAMOTO 004 Condoms feature a classic, straight-walled shape paired with ultra-thin walls. This combination makes them a great choice for users looking to switch to a familiar style condom, just thinner. The next-to-nothing thickness allows you to almost feel your partner’s skin while the light lubrication provides additional comfort. The condoms come in packs of 24, individually wrapped condoms and have over 1,500 five-star reviews to back up their outstanding quality. 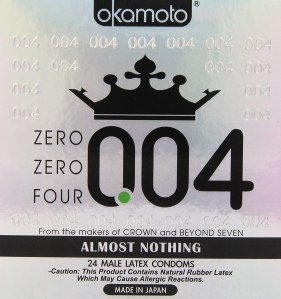 Splurging on condoms may seem like a strange idea. However, in these LELO HEX Original Luxury Condoms, you’ll find a condom that actually feels fancier than your average. Each condom features a truly unique hexagonal design which allows the condom to be thinner for added sensitivity while still being strong and durable. Furthermore, the unusual design sits closer and more naturally for greater comfort. They are also lubricated, feature a tip reservoir and come in packs of three, 12 or 36, depending on your needs. 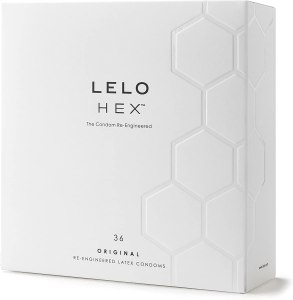 If you or your partner are concerned about using animal-based products, opt for vegan condom brand GLYDE from Australia. This ultra-thin, barely-there product is sustainably produced and great for sensitive skin. One buyer says, “These are my girlfriend’s favorite condoms, they don’t mess with her ph balance and are not irritating at all!” The condoms include organic lube, unlike other chemical-based alternatives on the market. They’re also sustainably (and ethically) produced. 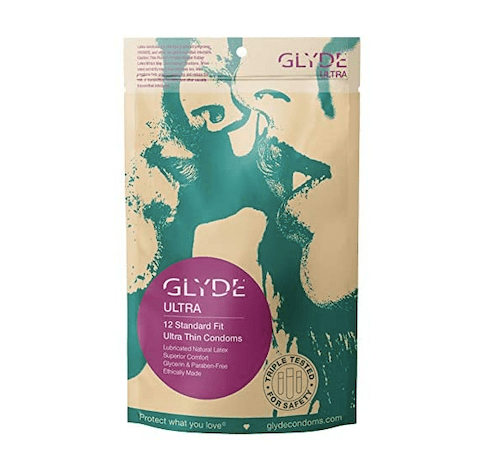 Apart from their effortlessly chic packaging (and discreet shipping methods) that will only help you up your game, Champ’s ribbed condoms are individually tested electronically for safety. While some brands like Trojan contain ingredients that irritate and cause allergic reactions in certain individuals, these boutique condoms are additive and BPA-free. Some users did find that they’re not as lubricated as other brands, so you might need a little extra. A satisfied customer mentions, “the quality of the fit and texture are excellent.“ 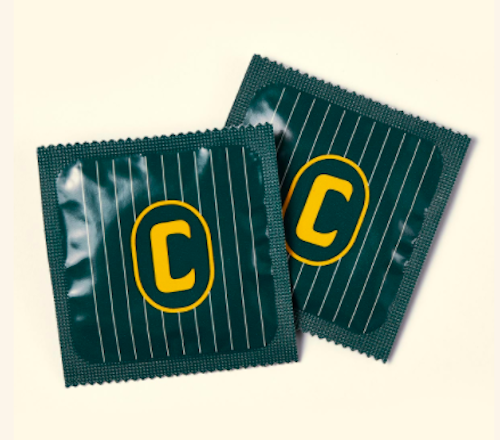