Everyone knows someone who can sleep through anything. Whether it’s a passing emergency vehicle or even the fire alarm, there are some people who just can’t be budged from their stay in the land of nod. And while it’s easy to equate this resistance to waking as laziness, it turns out the reasons behind heavy sleeping may not be so clear-cut. Scientists are still trying to work out why it’s harder to wake up for some people.

One theory is that your brain is responsible for the way you sleep. In the same way your skin, hair and other body features are predefined, it’s possible your brain, to some extent, is exactly that way, too, when it comes to waking up and enduring disturbances as you sleep.

However, while it’s useful to understand that people are put together differently and wake up to differing levels of sleep interference, a nine o’clock meeting on a Monday is the same for everyone. Walking in late and announcing, “Sorry I’m late, but I’m a heavy sleeper,” isn’t going to win you any friends, which is why ensuring you wake up on time remains a top priority.

What To Look for In An Alarm For Heavy Sleepers

Heavy sleepers may also struggle with getting up in the morning due to poor sleep quality. If you’ve ever talked to a medical provider about bad sleep, you likely know that smartphones and their blue light are a major culprit for poor sleep. By getting smartphones out of the bedroom and replacing them with a traditional alarm clock or a clock that is designed to create an environment that is conducive to healthy sleep (check out some of our sunrise alarm clocks below), heavy sleepers who typically miss their alarm may finally find themselves waking up easier and better rested.

To deal with oversleeping, we’ve put together a list of the best alarm clocks for heavy sleepers. By using extra loud alarms, requiring physical activity, or creating a healthy sleep setting, these alarm clocks will help users wake up on time.

With thousands of rave reviews from users, it’s safe to assume this alarm clock for heavy sleepers is definitely waking someone up. In addition to the average noise production, the Sonic Alert Sonic Bomb Alarm Clock comes with red flashing lights and a bed shaker to put under your pillow, sheets or mattress to deliver a sleep-disrupting shake when it’s time to rise. The popular device is available in a range of colors, meaning there’s one for every style of bedroom decor. Plus, the large LED display ensures you can always read the time. 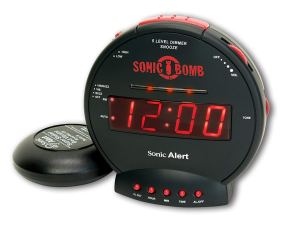 Maybe you’ve found an alarm that is loud enough to wake you up in the morning, but the snooze function still makes it difficult to get up on time. Take away the temptation with the small but robust Peakeep Twin Bell Alarm Clock. The traditional alarm clock, which is available in several bold and bright colors, does not have a snooze function, meaning when it goes off, it’s time to get up. Unlike a traditional clock, the Peakeep doesn’t make a ticking noise that could bother some users. Instead, it saves all its volume power for the alarm. Just remember to set the Peakeep every night. 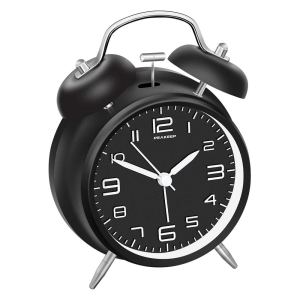 The Screaming Meanie 220 Alarm Clock is built with one thing in mind — waking you up. It offers three different levels of sound with the loudest intended to leave no one behind in the land of nod. The battery-powered device is a great choice for travelers and business people who need an alarm clock for heavy sleepers that is slightly more powerful than those found in the average hotel room. The device also comes in a choice of black or blue and has glow-in-the-dark details for easy use when the lights are out. 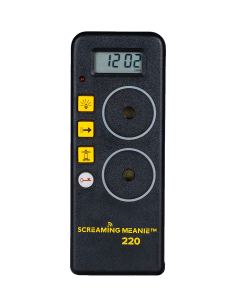 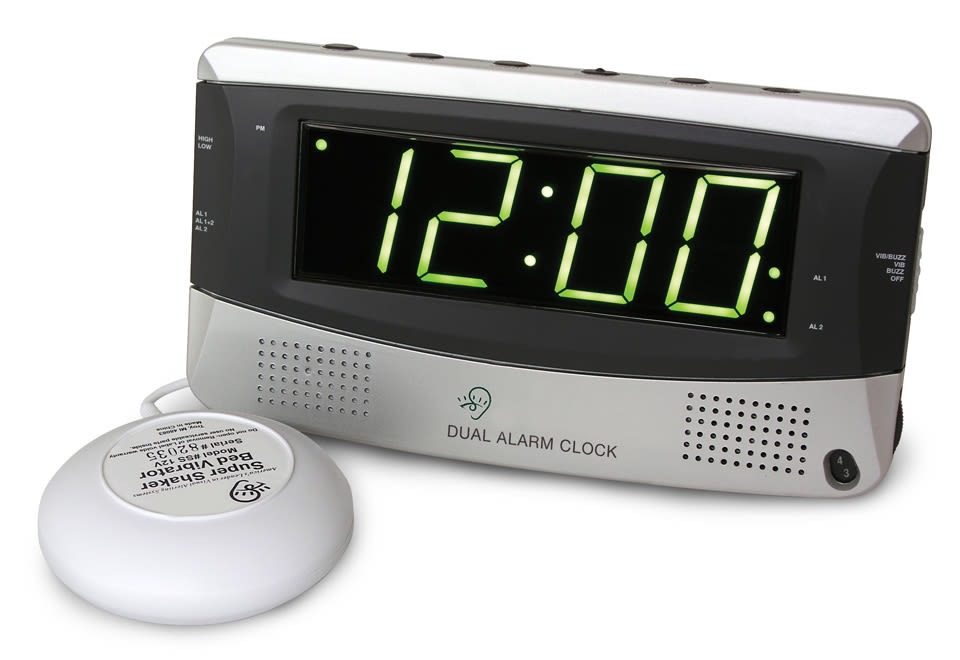 For an alarm clock that is so much more, we like the Hatch Restore. The Hatch is an alarm clock for heavy sleepers that is focused on giving users a quality night of sleep, which helps them wake up feeling refreshed in the morning. Using the Hatch app, users can set their wind-down time, which will create dim lighting in the bedroom. Various wake-up times can also be programmed, with the Hatch getting brighter and louder as per the user’s request. A white noise option can help create a deep sleep and the Hatch doubles as a reading light. The Hatch can be set through the touch controls on the physical unit or through the app and there are upgrades within the app for those who want to access features like guided meditation, sleep stories, and soundscapes. 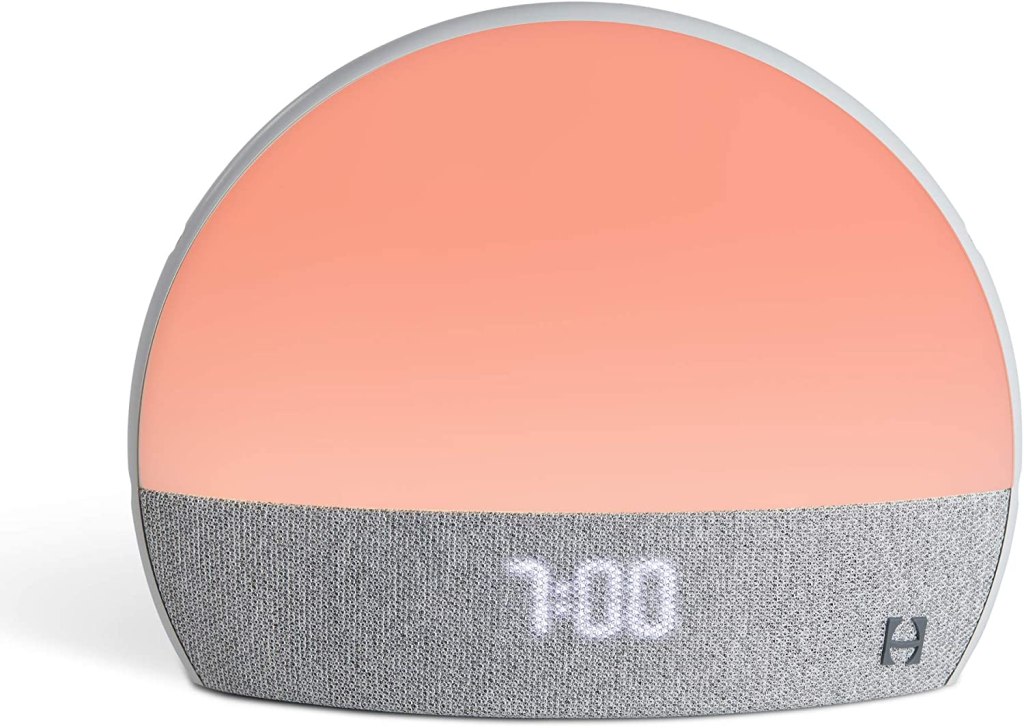 If you’re not sleeping near an outlet but still need an alarm that is loud, try the Banne Loud Alarm Clock for Heavy Sleepers. The compact clock allows users to set two alarms each day and pick from three wake-up date modes, so setting one alarm for Monday to Friday and a second for Saturday and Sunday is easy. The Banne has a snooze function and an adjustable nightlight. Designed with a traditional loud bell alarm, the Banne has a clean display that shows the current time, date, and alarm time. 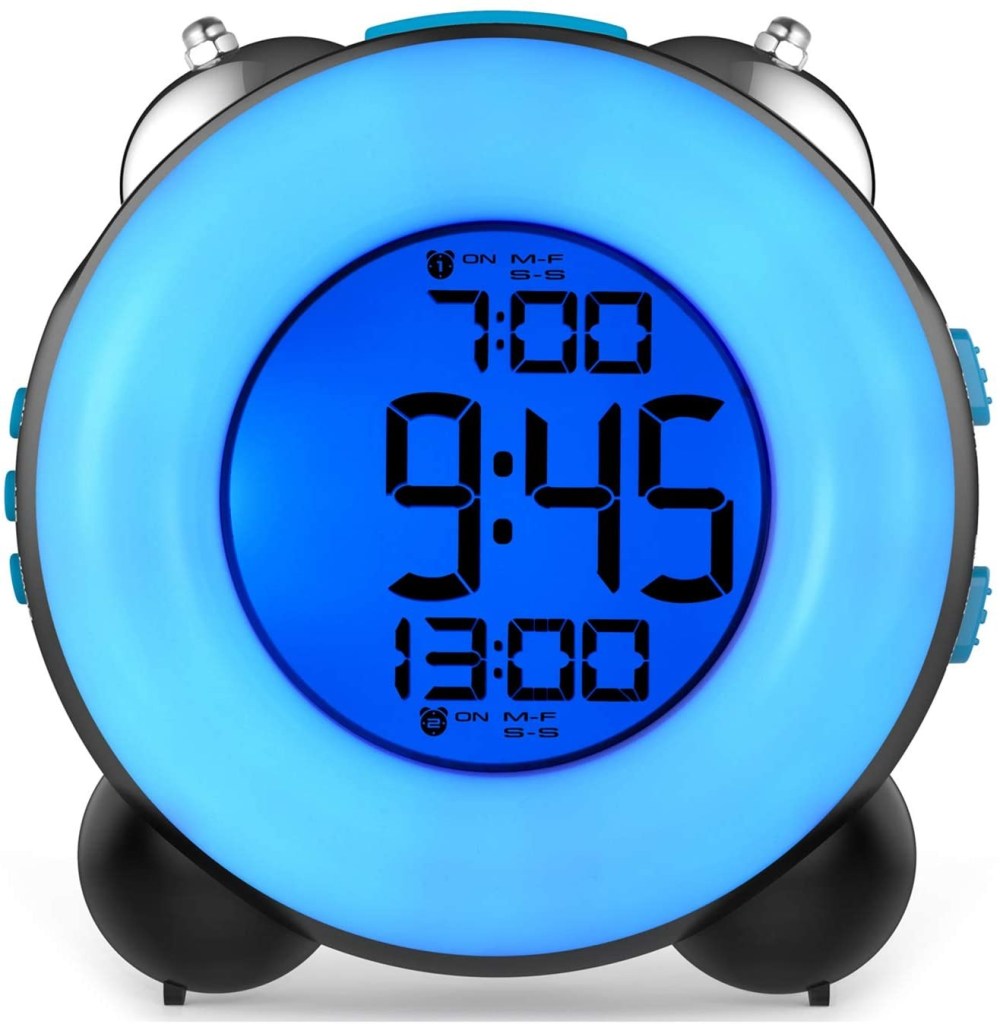 Whether you’re looking for an alarm clock that will get kids up and moving in the morning or need to give yourself a challenge, the Clocky is annoyingly effective. We mean that in the best way possible. The little alarm that could is available in several colors and does all its own stunts, including rolling, hiding and even jumping small distances when its alarm sounds. Users must catch their Clocky in order to turn off the alarm or hit the snooze, which can be customized for one to eight minutes in length. Get up and get moving with a loud alarm clock that helps users get their steps in each day. 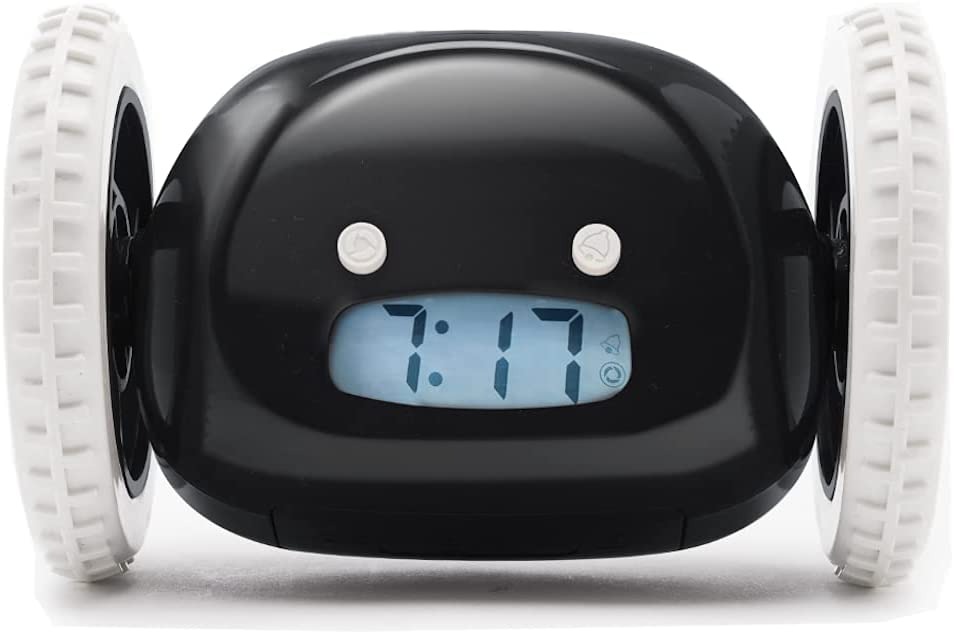 If part of the reason you need a loud alarm is because of poor sleep quality, which is making you extra groggy in the morning, it’s time to invest in the Philips SmartSleep Wake-up Light. Like the Hatch, the Philips can be used as a reading light with 10 brightness settings. It also features an FM radio, a tap snooze option, and an auto dimmable display. The Philips creates a simulated sunset and sunrise with its gentle lighting and five natural wakeup sounds, which helps to create a setting that is conducive to healthy sleep habits. 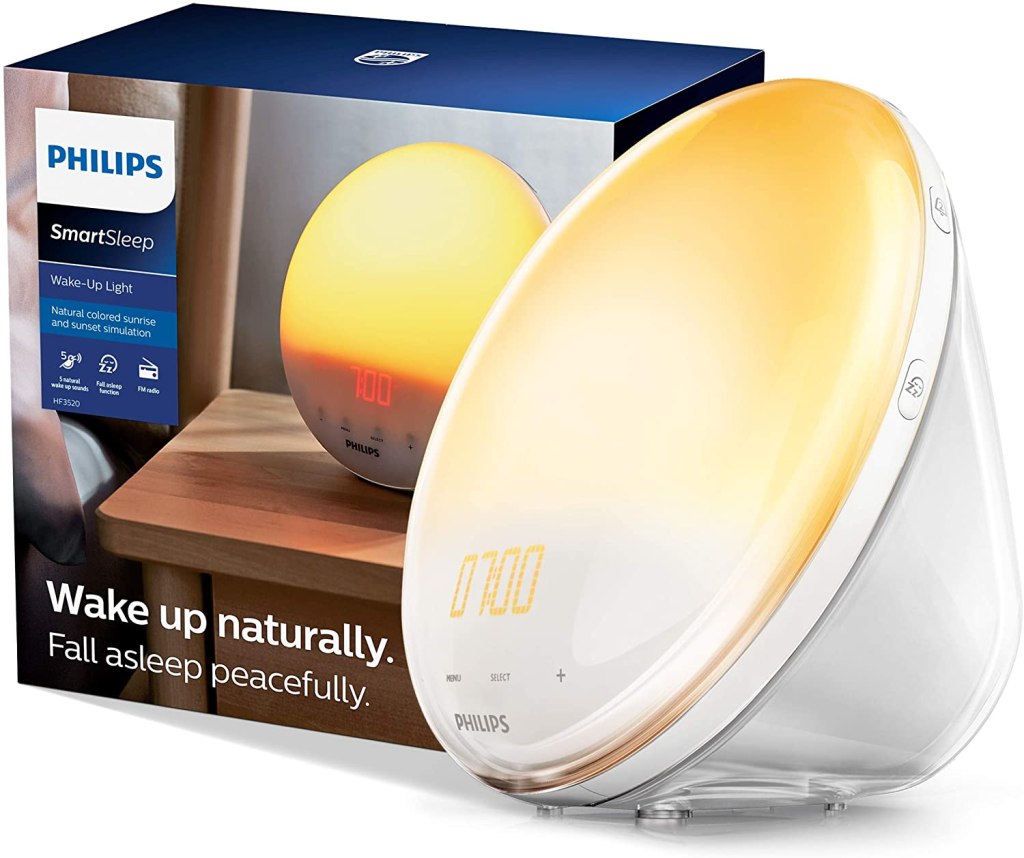 The Travelwey Home LED Digital Alarm Clock is an affordable, basic and effective alarm clock that is loud enough to wake even the heaviest of sleepers. The large LED display is ideal for users with vision issues and includes a dimmer slider. The AC electric-powered clock comes with a battery backup to ensure you won’t miss your alarm even in the case of a power outage. The Travelway features low and high alarm volume options and a snooze button. With speakers on both sides of the unit, the Travelway has a sound system that can’t easily be ignored. 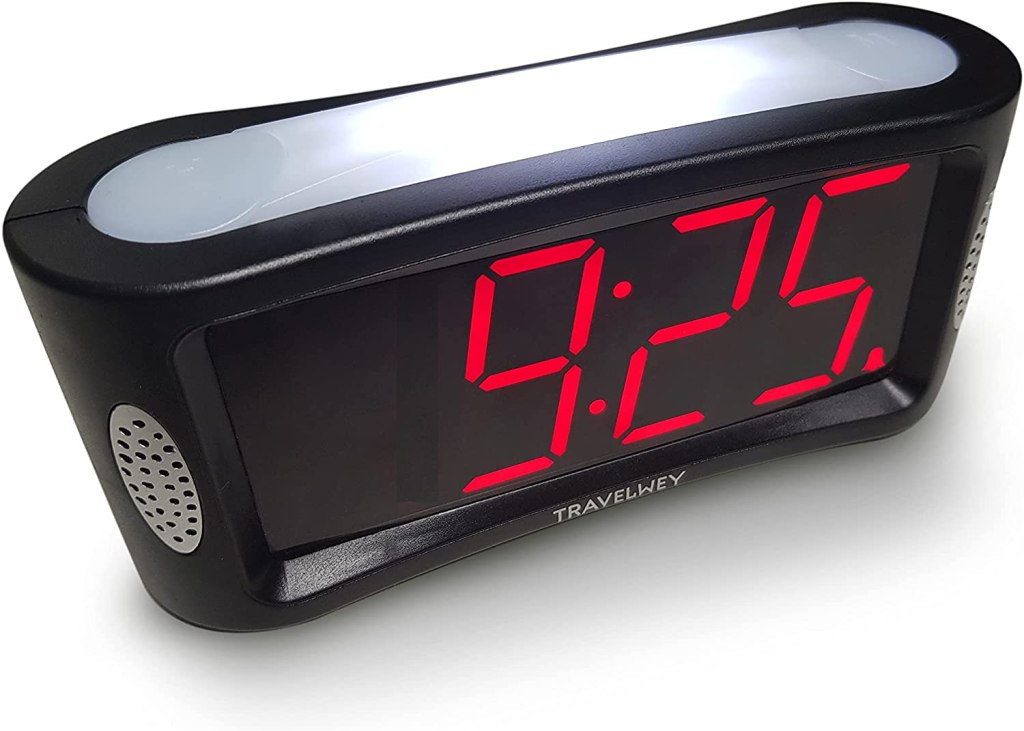 For an alarm clock that can do so much more, there’s the Echo Show 8. Multiple alarms can be set at once, making it a great option for couples who share a room or users who want to be reminded of appointments or to take medications. Thanks to its smart capabilities, users can opt for their favorite song to be used as their wake-up noise. Using the Alexa capabilities, the alarm can also be turned off or snoozed through voice controls. Of course, there are all the other benefits that come with an Echo Show as well, including video chats, video streaming, music streaming, slide shows, news reports, control over other Alexa-capable smart products in the home, and much more. 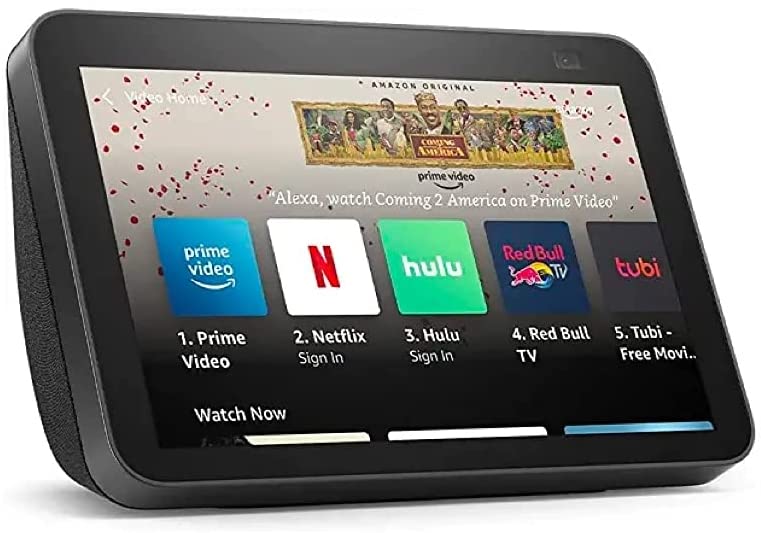 PROJECTS THE TIME ON THE CEILING

For those who fancy a dose of modern tech in their home devices, the Magnasonic Projection Alarm Clock features a built-in projector to display the time on the ceiling or wall, ensuring you can’t ignore what’s going on, even on the darkest and coldest of days when your bed is extra inviting. The unit itself features a large LCD display with time and temperature information as well. Plus, this clock has a built-in AM/FM radio and auxiliary input, allowing you to enjoy your own music through the speakers. 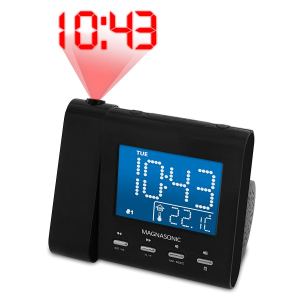 The ROCAM Vibrating Loud Alarm Clock is a smart little device that wakes you up by delivering extra loud, un-ignorable sound, and using a remote vibrating device to attack your sleep from multiple fronts. This alarm clock is great for people who are hearing impaired as well as those who pretend to be when it’s time to get up. The vibrating device can be placed under pillows, duvets, and mattresses. You’ll also find the alarm has a built-in USB charger to ensure you always wake up with a full battery in your smartphone, even if you’re not quite at 100% yourself. 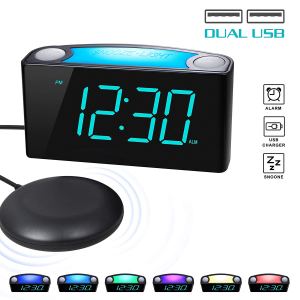 Wake-up lights are all the rage. Instead of shocking yourself with the harsh buzzing or ringing of a high decibel alarm, clocks like this TITIROBA Wake Up Light work by stimulating your body’s natural reaction to the sunrise. As it works from one percent to 100 percent brightness, your body notices the light and brings you out of your deep sleep. The alarm clock for heavy sleepers does, of course, include normal alarm functions just in case the sunrise mimicking light doesn’t work. Plus, the brightness, lighting, and volume can also be adjusted to match your bedroom requirements. 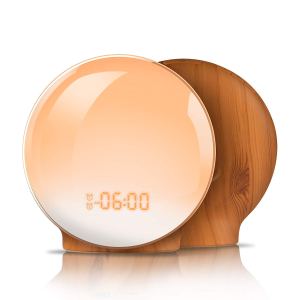