Most people don’t sleep properly. Whether that’s not getting enough hours in bed or waking up several times in the middle of the night, this can have a huge impact on health.

In addition, 40% of Americans suffer from some type of anxiety. This can also lead to sleep issues under the right conditions.

Combined, these facts mean that people across the country are now seeking out ways to curb their anxiety and give them a better night’s sleep. For that reason, weighted blankets have become increasingly popular in recent years. In fact, they’ve become so popular that there’s a growing demand for weighted comforters, too.

Some researchers believe that using a weighted comforter can lead to:

Of course, we’re not scientists, and we can’t speak to the health benefits of these products. We can tell you that it’s hard to beat that warm, safe, snuggly feeling you get when curled up under a weighted blanket.

It’s first important to note that both weighted blankets and weighted comforters provide the same benefits. If stress relief is what you’re after, either product is worth a closer look.

For sleeping purposes, weighted comforters bring together the heavy layer of a weighted blanket and your bed’s comforter into one package. This prevents the need to add an extra weighted blanket to a bed already full of sheets and blankets, simplifying the process.

In addition, a weighted comforter will cover your entire bed whereas a weighted blanket may only be couch sized or big enough for a single person.

Furthermore, weighted comforters tend to be more hygienic than weighted blankets. That’s because they almost always have an exterior cover that can be easilyw ashed. On the other hand, weighted blankets can be incredibly hard to clean.

However, weighted comforters are heavier than weighted blankets as they tend to be bigger. That may be a consideration if you want to move your comforter around your house from time to time. In fact, customers with mobility issues may even have trouble moving a weighted comforter on their own, so consider this before buying one.

The Brooklinen Weighted Comforter gives you all the quality and comfort you’ve come to expect from this bed linen brand. The blanket is filled with soft cotton and glass microbeads which are evenly distributed using the company’s unique baffle box construction. It also has duvet cover ties, so that it won’t slip and slide inside the cover you choose. When choosing which of the Brooklinen weighted comforters is right for you, the brand recommends choosing one that’s 10% of your body weight and easing it onto your bed, starting at your feet, so that your body can get used to sleeping under the weight. 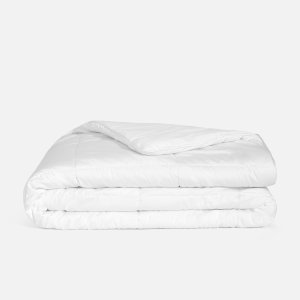 While the Brooklinen Weighted Comforter might take the number one spot on our list, the Bearaby Sleeper is close behind. Thanks to its patented airflow channels, breathable eucalyptus filler and cool Tencel fabric, this weighted comforter is especially ideal for hot sleepers. In addition, the blanket is filled with a unique glass and that some people find to be more comfortable than the traditional glass beads. This comforter is available in a variety of weights as well as twin, queen and king bed sizes. Keep in mind that the king version of this comforter has a zipper down the middle so it can be shared between two beds if need be. 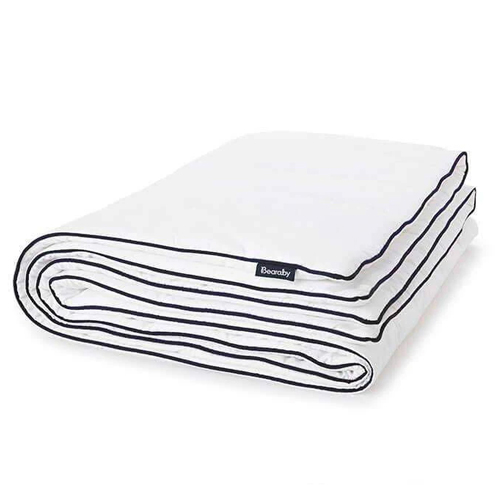 While not a comforter in the traditional sense, the Quility Premium Adult Weighted Blanket can be used as your bed’s quilt thanks to its removable cover. The quilt boasts over 15,000 five-star reviews on Amazon and is trusted by thousands of users to quell their anxiety. The weighted quilt itself contains breathable cotton fabric, hypoallergenic glass beads and polyester padding in six different layers. In addition, the blanket’s super comfortable removable cover puts this blanket lightyears ahead of its competitors, according to reviewers. 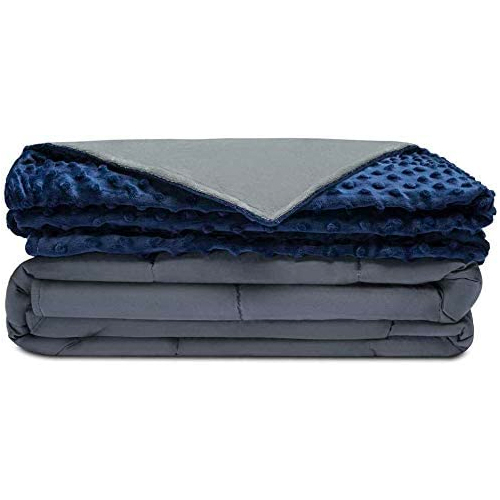 The Weighted Evolution Weighted Blanket is great for deep sleep and stress relief by won’t cause your allergies to go haywire. The inner comforter is made from 100% microfiber with four-inch pockets in which you’ll find a layer of polyfill insulation and high-quality micro-glass beads. This design allows the blanket to contour to your body, providing “Deep Pressure Stimulation.” It’s also quiet and breathable to keep you from waking up in the middle of the night. In addition to the inner comforter, this blanket also comes with a bamboo duvet cover that’s always cool to touch and machine washable. 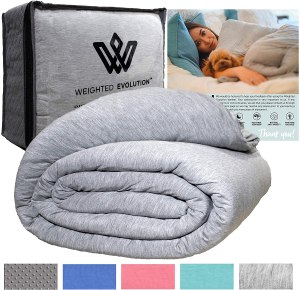 Most weighted blankets and comforters are filled with glass or plastic beads. Unfortunately, these can make it feel like you’re sleeping under a pile of bean bags. Degrees of Comfort has attempted to remedy that problem with their unique nano-ceramic beads. These stay distributed throughout the entire blanket and make it feel like you’re sleeping under a sandy beach rather than a rocky one. The Degrees of Comfort Weighted Blanket also comes with two different duvet covers. There’s a fleece cover for the colder months and a CoolMax microfiber cover for the warmer months. Together, these elements provide a comfortable sleeping experience in any climate. 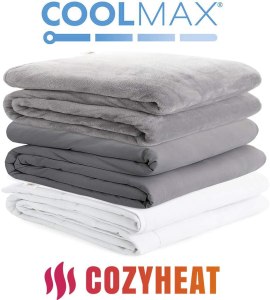