The fidget spinner, that trendy kids toy from the last few years, has made its way out of fringe Instagram meme accounts and is now a mainstream everyday carry for kids and adults (and pets!). The toy may have started as a fad, but it’s now a common part of people’s everyday carry on the basis that it helps with stress and ADHD.

But some of us were still turning up our noses at fidget spinners (‘those are soo 2017’)… until we all found ourselves nervously twiddling our thumbs in self-quarantine. We’re quickly learning that the trendy little gadget makes a fantastic companion for de-stressing at home in 2020 while on a Zoom call, binging Netflix and generally trying not to go insane.

If you haven’t purchased a fidget spinner yet, aren’t satisfied with the cheap, boring ones at gas stations, or want to add to your collection, we’re here to help. We rounded up a dozen premium fidget spinners that are much more exciting and interesting than the ones you’ve seen before. Regardless of whether you’re on board with the trend or not, they’re worth trying out to help you relieve stress, bolster your attention span and pass the time without going stir crazy.

This metal triangle might look like a fancy spy gadget that Q would give James Bond, but it’s actually a functioning fidget spinner. It’s made of metal, providing a high-quality feel and some weight, and features lights on the tips of each arm that create a cool look while spinning. The lights aren’t battery-powered, but absorb light from the environment and re-emit it. The whole thing comes in a sleek box, so you might actually feel like a spy when opening it. 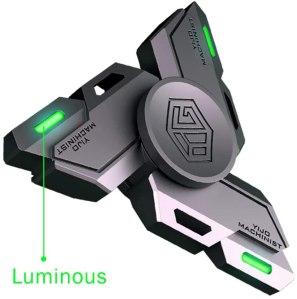 If you find yourself spinning in the dark often, go for this LED fidget spinner. The lights can switch between six modes and gadget features three colors (red, green and blue). The batteries are easily replaceable at home, so no need to worry about running out of juice. 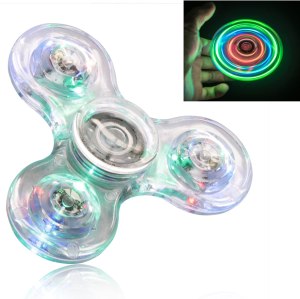 This fidget spinner from Wewinn is one of the most high-quality options out there. The frame is made of premium aluminum, while the gears are made of brass. 10 of the 13 gears have bearings inside, which distributes the spin around the gadget. This allows the Wewinn to spin for minutes on end with a single flick. The upscale spinner costs much more than average, but if you find your self twiddling a fidget spinner often then this is a great buy. 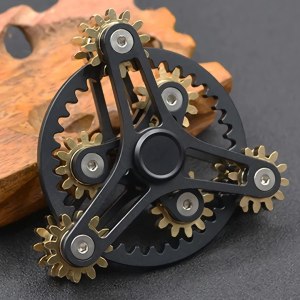 Themed fidget spinners are a bit of a grey area as major corporations haven’t licensed anything, but you can find spinners that non-officially rep your favorite movie, novel or comic book. This three-pack of “superhero” spinners features designs that look very close to Iron Man, Spider-Man and Captain America, making them a great choice for any Marvel fan. 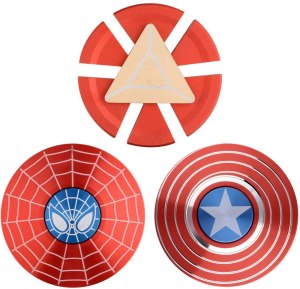 This spinner is (unofficially) modeled after a golden snitch; the most important ball in Harry Potter’s game of quidditch. The wings are set on a self-lubricating bearing, allowing you to spin the game-winner for one minute with a single flick. It’s made of a rainbow metal-alloy (sorry, not golden) and comes in a travel case for safekeeping. 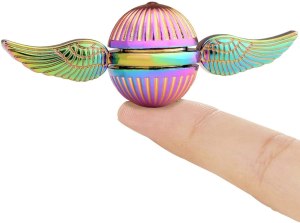 If you’ve ever seen a western movie, chances are you know the oh-so-cool spinning action of a revolver. This fidget spinner replicates that movement between your two fingers with a revolver cylinder shape. It even boasts removable bullets so you can load, aim and spin like a real outlaw. 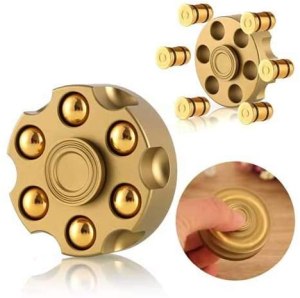 This spinner from Atesson is a great option if you’re looking for an upgraded version of the basic fidget spinner. It has the classic shape that you’re familiar with (three rounded arms mounted on a central bearing) but takes things up a notch with a high-quality metal construction and a premium bearing for fast, steady spinning. It comes in blue, pink or silver, but we’re partial to the sleek silver color linked below. 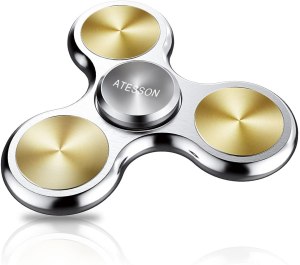 Combine fidget spinners with a good laugh and you get a recipe for solid de-stressing. This poop emoji spinner does just that. It’s shaped like the notorious poop emoji, but the face makes up the center bearing of the fidget spinner. It’s also very affordable right now at just $4, so you can grab a few for your family or roommates. 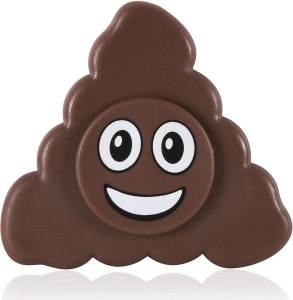 This fidget spinner incorporates a Rubix cube-like function, adding a fun new element to the mix. It’s made up of nine cubes, with the bearing in the center and floppy rotatable outer edges for extra fidgeting. It boasts great ratings with 4.5/5 stars and 250 reviews, as users say it’s very fun and runs well. 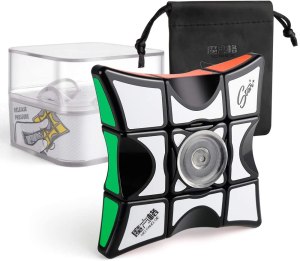 There’s no reason to add a device to your workspace when you can simply upgrade your writing utensil with this fidget spinner pen. The two-arm spinner doubles as a pen on both sides, allowing you to spin while you take notes, write or draw. This makes it great for staying focused during lectures or meetings, and doesn’t require switching between a dedicated spinner and your pen. 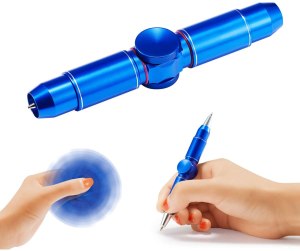 This rainbow-hued fidget spinner is constructed from ultra-durable stainless steel. That gives this stress toy a satisfying weight in your hand. And when the lotus pattern spins, you’ll see a beautiful swirl of color, especially when the light hits it. 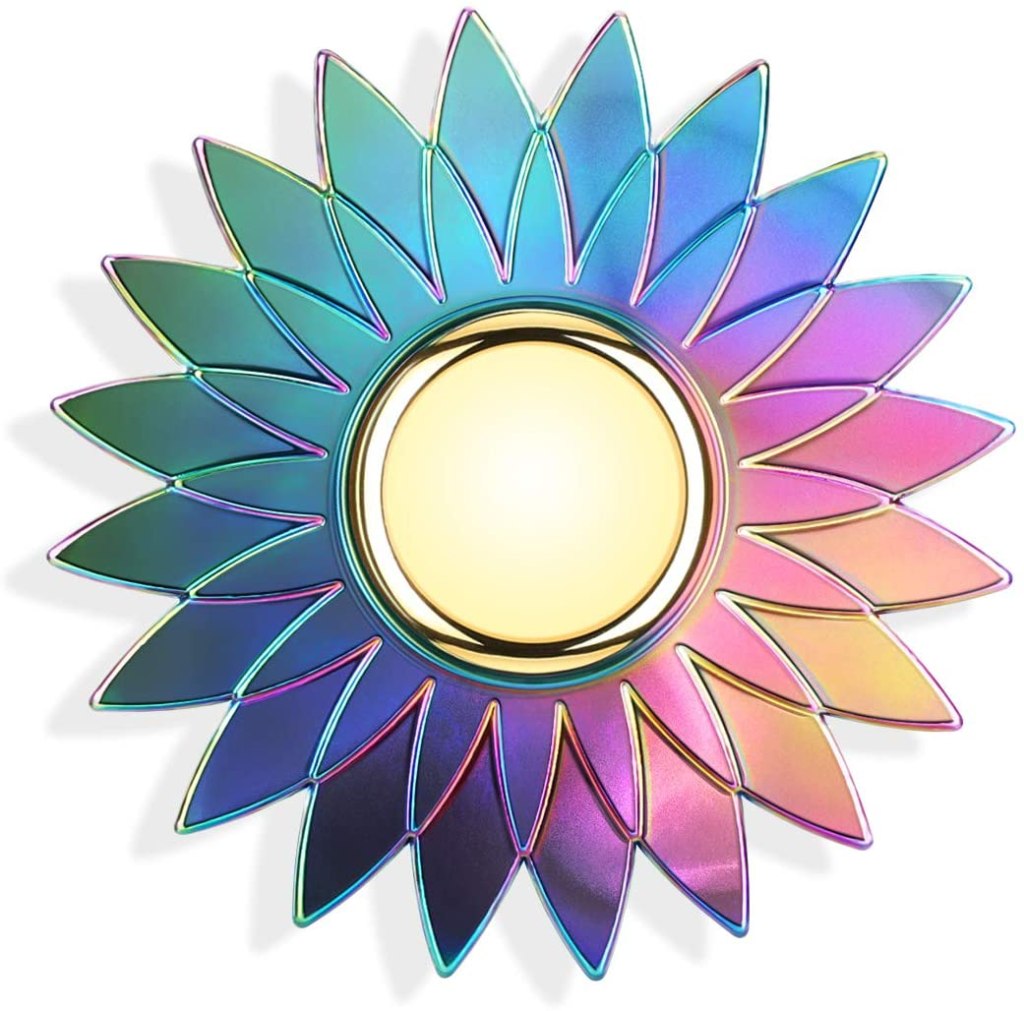 If you can’t decide on a fidget spinner, want one for each day of the week, or want to match your spinner with your outfit, go for this 12 pack of assorted fidget spinners, each with a different colorway and design. This 12-pack makes for great gifts at parties, too. 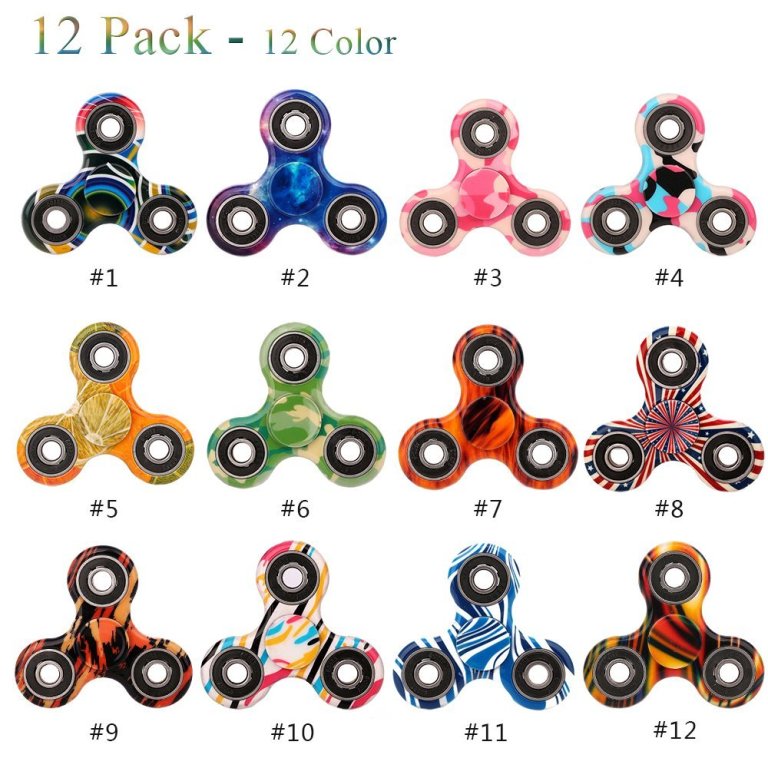 The Best Hacks For Stress Relief