Fidgeting with your hands or tapping your foot is generally perceived as a sign of nervousness, anxiety, or even an underlying disorder like ADHD. And while that certainly can be the case, some people just like to fidget as a way to entertain themselves while sitting, or to help them focus.

Fidgeting has turned into big business, thanks to the explosion in the popularity of fidget spinners. Sure, the fidget spinner boom was pretty short-lived. But in its wake, a whole host of fidgeting toys have emerged, including Pop Its, which are designed to mimic the satisfying feeling of popping bubble wrap. In fact, the popularity of Pop Its has earned the attention of the Wall Street Journal, which documented the rise of fidget toys among young people.

Fidget toys have purported benefits in terms of reducing anxiety and even physical health, although big studies are lacking. All of these toys arguably owe a great debt to the desktop fidgeting toy of yore, the Tech Deck.

Tech Decks are admittedly distinct from spinners, Pop Its, fidget cubes and similar toys in a couple of key ways. Tech Decks do require some level of skill to play with, especially if you’re looking to learn tricks, whereas fidget toys are simply designed to be fidgeted with, often while your focus is elsewhere. That said, Tech Decks are similar in that they lend themselves well to use at a desk, which is why they were so popular with bored students. They’re small enough to be taken anywhere, and they’re an entertaining way to take a break from screen time.

What Are Tech Decks?

Tech Decks, for those unfamiliar, are small replicas of skateboards that you “ride” with your fingers — experienced fingerboard riders can perform pretty elaborate tricks. Tech Decks (a trademarked brand, the toy itself is called a fingerboard) have waned in popularity, earning a nostalgia factor on par with the dial-up noise and Club Penguin. But, unlike those vestiges of the aughts, Tech Decks are very much still around — Spin Master, the toy brand behind Tech Deck, advertises a line of 2021 releases.

Where Can I Buy Tech Decks?

Tech Decks are readily available online from big box stores like Target, Walmart and online retailers like Amazon — you don’t need to hunt them down on bidding sites, though there certainly are rare ones out there. The collectibility of Tech Decks is owed to the fact that they make officially licensed fingerboards of skate brands like Santa Cruz, Blind and Element.

All you really need to play with a Tech Deck is a flat, relatively smooth surface. But Tech Deck also offers more elaborate playsets based on skate parks and street skating. Even if you’re a grown-ass adult or you’ve got kids of your own, now might be the perfect time to get into the Tech Deck.

Check out a few of the collectible options below.

Element is one of the most iconic skateboard brands, and this Tech Deck features the brand’s design on the deck. The performance series boards are made from genuine wood and are designed to replicate the feeling of a real skateboard. 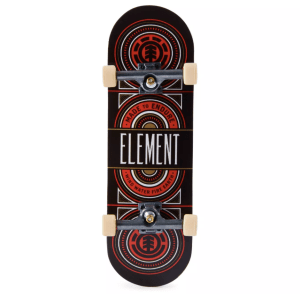 This set features two fingerboards based on Blind brand stakeboards, and there’s a ramp included and challenge cards to compete with others. 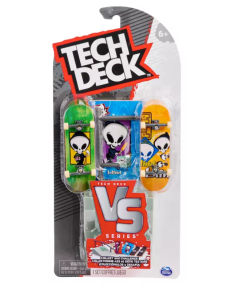 Six decks are included, with graphics from a variety of the top skateboard brands. This set is even more interactive, because there are all the trucks, screws and nuts needed to build your own custom decks. 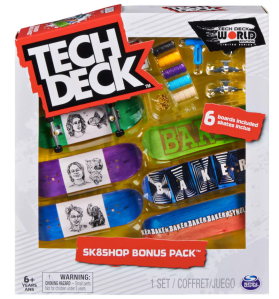 This Tech Deck playset is a more elaborate option, featuring one deck and a pipe set for tricks. The pipe folds up for easy storage. 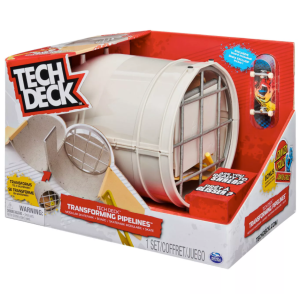 This Tech Deck is part of the performance series, which is made from genuine wood and is designed to emulate the feeling of a real board. It features a design from Primitive skateboards. 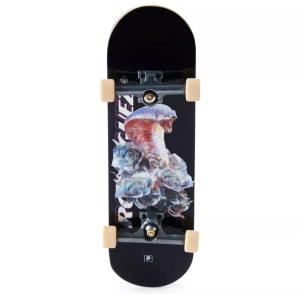 This set features a fold-out set featuring multiple ramps, and a board is included. It folds up for easier storage. 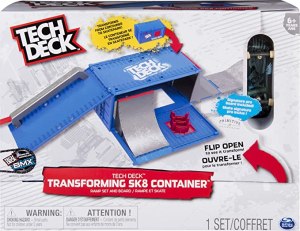