Has an idea for a life-changing, problem-solving, “totally genius!” product ever popped into your head? Sure it has, we’ve all had those “a-ha” entrepreneur moments where we take an everyday life nuisance and invent a solution for it. Some of us talk about them for years without taking action, and others take their idea far enough to face the panel of judges that unlock entrepreneurial dreams for a living: the sharks on ABC’s Shark Tank.

Shark Tank is now in its 12th season of helping budding entrepreneurs take their idea, pitch it, secure a business deal and gain funding that can take their business to the next level. They’ve helped catapult now widely-known products into popularity via the funding they give and the publicity that comes with simply being on the show in the first place. Barbara Corcoran, Mark Cuban, Daymond John and Kevin O’Leary are some of the most recognizable sharks who make, take and negotiate deals on the show for a living, using capital they’ve gained in other professional ventures to help others succeed.

I’ve always been fascinated by this show and how the experience of being on the show actually plays out in entrepreneurs’ journeys. Thankfully, I was lucky enough to be able to sit down and chat with former contestant Meredith Jurica, founder/CEO of Makeup Junkie Bag, a $10 million business featured on the show in 2019.

She started off like many entrepreneurs do, with a need she decided to fill herself. She was a speech pathologist who needed a makeup bag large enough to fit the eye shadow palettes and brushes she wanted to tote around. She decided to reinvent the wheel and create a makeup bag large and flat enough to accomodate, and soon enough she was getting requests from friends and relatives. After she made her side hustle a Facebook page, orders started flooding in and it was off to the races. She brought in $1 million in sales the first year and quickly her sewing station grew beyond her kitchen table into 15,000 square feet of office space and dozens of employees. 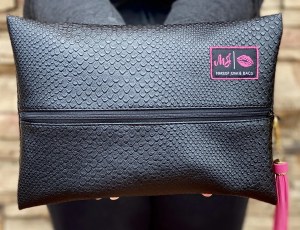 After a few years in business, she decided to apply for Shark Tank while watching the program after putting her kids to bed, only to receive a call back about four months later asking her to interview in the next round.

“I completely forgot that I applied and then four months after I did the application I got a call from Culver City, California, I’ll never forget the iPhone Caller ID screen, and they asked if I could send them some samples of my bags! Over 40,000 people applied for that season and about 80 of us made it onto the show,” said Jurica, who runs her business from and lives in Corpus Christie, Texas. If you’ve ever wanted to apply to be on Shark Tank and wondered how long the application process takes, you might want to buckle your seat belt. This is no fast cash scheme, but a long-term investment for solid businesses.

“It took, I think, nine months of rounds of cuts of doing Skype calls with the producers and them checking in on your business. They have to vet you, your finances, your legalities — everything about your company,” said Jurica. She explained how they never told her whether she had made it to the next round or not, she just had to wait for that next call. Then, one day, she got the final call from them she would ever receive.

“The very final final round, I did not hear from them for over six weeks, not a word. It’s a situation where you can’t badger them or call them or email them to ask, you just have to wait. You have to pretend you’re not going to get picked and go about your life!” said Jurica.

“I was at lunch with my managers and got a call from, again, ‘Culver City, California’ and they said ‘Can you be in LA in 10 days?’ and I said ‘Yes! Yes I can!”

After that, it was a whirlwind of rehearsal pitches, hair and makeup and a rescheduled time slot with the sharks before Meredith got to pitch her idea and receive a publicity boost that would change the entire trajectory of her life, and business.

“I was offered funding. I got three offers and on the show I accepted an offer from Lori Greiner but in the negotiations after, a lot of people don’t know this, I didn’t actually take her deal. I manufacture everything here in Texas at my own facility and I employ a lot of local people who depend on that for income and do a great job. She manufactures a lot overseas and there were things we just couldn’t figure out as business partners,” said Jurica.

“I didn’t take any money, I didn’t accept the deal and I still own 100% of my company. But we’re still friends, we still talk and I still see her sometimes. It’s fun and I feel like she’s always there if I need her.”

I love this story, and have a lot of admiration for Jurica and her decision to do business her way while still maintaining a beneficial and worthwhile professional relationship with her shark, Lori. It’s a narrative from the show I had never heard before, and highlights a new element of possibility with opportunities like this one. Turns out, the deals not coming to fruition happens more often than you’d think on the show. Many sharks change deals off-camera or the contestants change their minds.

She still financially benefited heavily from being on the show, and described how every time her episode airs as a rerun she receives a revenue bump.

“I think that it completely changed my business for the better. We were already on track to be a good company and do good things, but being put in that national spotlight like that did amazing things for us,” said Jurica.

“We got 1,000 wholesale applications the month following the show. We had a waitlist to even carry our product in your store. Which, I mean, it still makes me smile because that’s really cool!”

She described how there’s definitely a “Shark Tank tidal wave” that comes after the show where you receive a bunch of attention and then eventually it washes away and things go back to normal.

“It was a year and a couple months before things got back to normal. We sold, in 6-8 weeks following the show airing, we sold as much as we had sold the entire year before. I don’t think people realize the magnitude of that show and its following,” said Jurica.

I asked Jurica which types of products make it onto the show, and if she saw any commonalities between the brands that beat out the immense competition and actually get to pitch in front of the sharks themselves.

“I see two commonalities. One, usefulness. Even if it’s weird and chaotic and a weird presentation and off the wall, they pick products that are useful,” said Jurica.

“There’s the useful genre, something useful and clever, and then the second is philanthropy. It’s people who start companies that help things. I learned after meeting a lot of contestants that most people were either clever/useful or philanthropic, people who made a product that’s typical but did something cool with it.”

“People are intimidated and afraid to do something like that because they think it’s so hard, but the truth is I just woke up in the morning and I made a bag and sold it. And I sourced fabric, and I didn’t know how to do that and Googled it. I self-taught at my own pace along the way and this company was born, and it was cool. Even if I didn’t have Shark Tank, Makeup Junkie Bags would still be a successful company, because people just love the product,” said Jurica.

She said she had nothing but a great experience on the show and would do it again in a heartbeat. Since the show, Makeup Junkie Bags has expanded into clothing, makeup, purses and more varieties of her original makeup bag. She’s a full-fledged Shark Tank success story and has nothing but positive things to say about her experience. Let’s see about a few other Shark Tank successes, shall we?

That’s right! Did you know the Ring video doorbell (formerly known as Doorbot) was a product on Shark Tank? This might be one of the show’s biggest success stories of all time, After the show, the product garnered investment support from celebs like Richard Branson and Shaquille O’Neal and eventually sold to Amazon for $1 billion+. The founder, Jamie Siminoff, has actually returned to Shark Tank as a guest shark on numerous episodes. 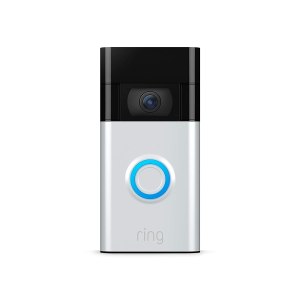 Full disclosure — I was sent one of these blanket sweatshirts recently and they are amazing. They’re exactly as comfortable as they look. The Comfy launched on Shark Tank with a great prototype that garnered attention from the sharks and is now a full-fledged product you can buy on Amazon. It has over 37,000 (!!) reviews and a 5-star rating. It’s available in a variety of colors and patterns, and it’s machine-washable and easy to clean. 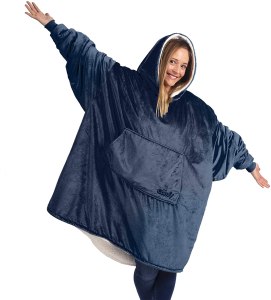 Courtesy of Amazon
Buy: The COMFY Original $39.99
buy it

This is another super popular product that was featured on Shark Tank in season 4, and has gained a ton of notoriety since then. It’s essentially a super long mini spatula that you can use to scoop out the last bits of products like shampoo, lotion, ketchup, etc. It works in the bathroom for grooming products just as well as it works in the kitchen, and it’s also great for fine-tuned cake decorating! 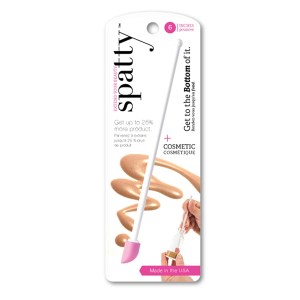 Courtesy of Amazon
Buy: The Spatty $4.94
buy it

This is another super popular product from the show that got its start on season 4. It was invented by Aaron Krause, the owner of a car-washing business who decided to improve the scrubbing products he was using by replacing them with urethane foam. He cut two holes in the foam circles and ridged the edge to make them easier to grip, and pretty soon he had a game-changing sponge on his hands. In 2019, Scrub Daddy was valued at $170 million, making it the highest-earning product ever successfully pitched on Shark Tank. 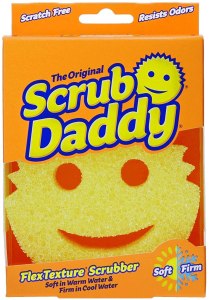 Marc Newburger was a struggling filmmaker trying to make it in LA when his phone rang and vibrated itself between his seat and center console. He sprung for the phone — thinking it could be a producer — when he nearly drove his car into a telephone pole and a pedestrian walking by, who narrowly escaped death. He and his roommate, Jeffrey Simon, decided there must be a better way than losing keys, phones, wallets and final potato chips down that black hole between your seat and console, from which nothing ever returns.

They created the Drop Stop out of black Neoprene and polyester fiberfill designed to stretch, scrunch and take the shape of any car’s space. They struck a deal with Lori on Shark Tank and in the five years since the show have exceeded $38,000,000 in revenue with no indication of slowing anytime soon. 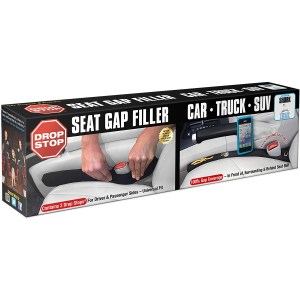 12 ‘As Seen on TV’ Products You Should Actually Buy