Whether you hate or love baseball the sport should have absolutely (well mostly) nothing to do with whether or not you love the best baseball movies.

For example, take me: The only way I get excited watching baseball on TV is to watch it with a friend who’s excited while I have basketball or football or literally anything else on my phone.

Don’t get me completely wrong. I used to watch baseball every day as a ‘90s kid, no matter who was playing. But after the 30th relief pitcher comes in, you just start to wonder why you’ve spent the last three hours watching the Pittsburgh Pirates beat the Arizona Diamondbacks 1–0, playoffs or regular season be damned. (For the record, going to see a game in-park is a totally different and way more awesome experience.)

But the beauty of the best baseball movies is you get all the thrills of the culture of baseball and sometimes its most thrilling moments (you know, the seventh game of the ALCS, bases loaded, full count with the hitting team down by three runs) without the tediousness of actually consuming a real game or, heaven forbid, multiple games in a sitting.

And then of course there’s the fact that fictional or fictionalized baseball can tell the absolute most compelling version of the baseball story by highlighting the big moments important to the story, which sure beats seeing the ninth pop-up out of the game.

That’s why I rounded up 11 of the best baseball movies I’ve seen below. I’m confident you’ll have heard of or seen these films listed on other best baseball movies list, but being the writer, I had the privilege of including an absurd personal favorite for the 11th pick. Aside from that one, the rest of these baseball movies boast critical acclaim and their gift is to remind you of the value of America’s national pastime to its culture and its role in the country’s history without, you know, having to actually watch baseball.

Without further ado, here are the best baseball movies, roughly ranked from best to least best and factoring in a great deal of personal favoritism.

This is a lazy top pick I’ll admit, but I just recently had the pleasure of taking in Bull Durham for the first time in a long time and it still holds up across any metric of baseball entertainment. Starring Kevin Costner, Susan Sarandon and Tim Robbins, the film focuses on the players and fans of the Durham Bulls, a minor league baseball team in North Carolina. It’s generally well-written and well-acted, with so many characters that feel authentic and great baseball scenes, not to mention it’s pretty damn funny. In short, this movie is impossible to not enjoy whether you like baseball or not. It is no accident that Bull Durham frequently tops these kinds of best baseball movie lists. 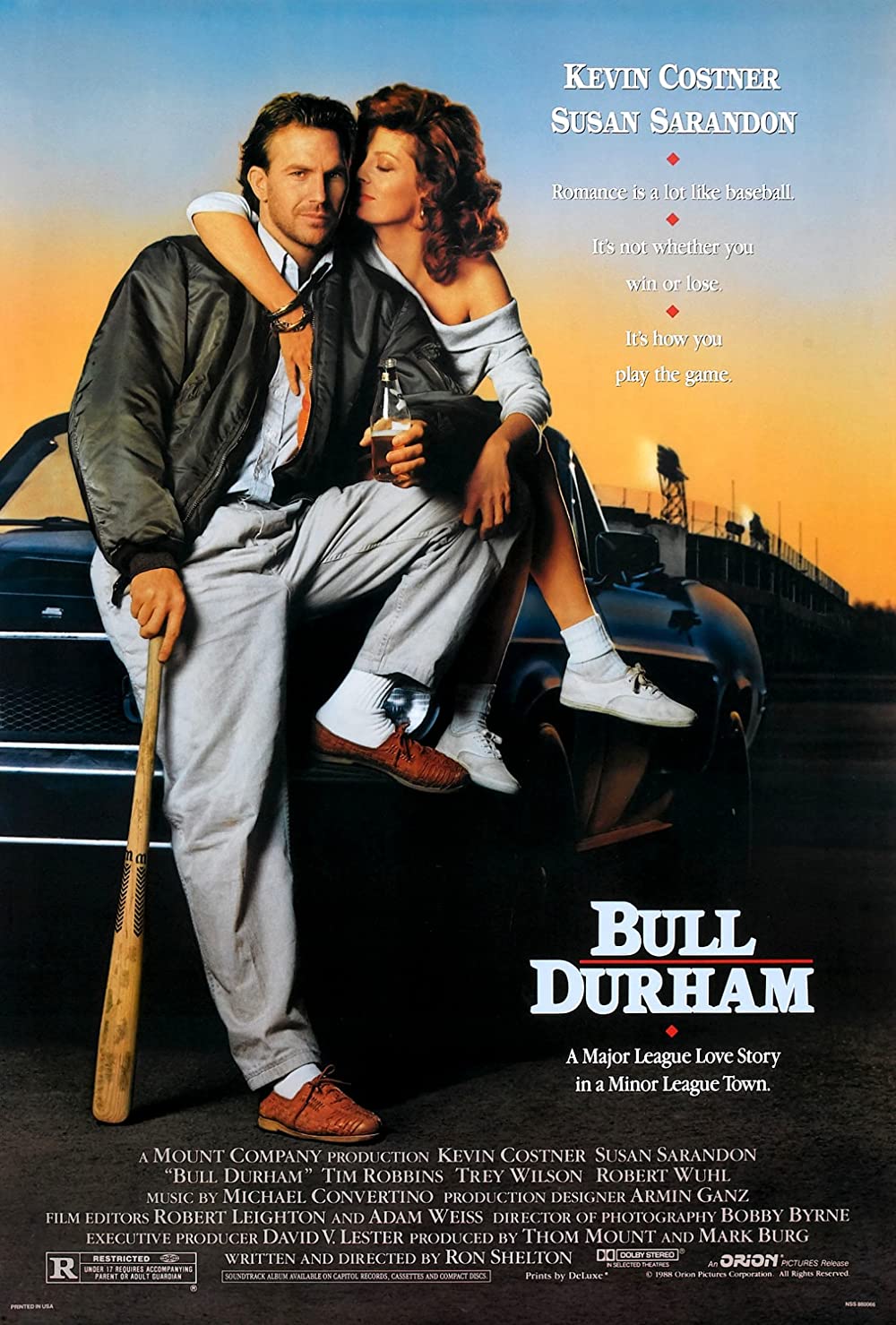 I’m probably ranking Moneyball too high for many baseball fans, but I could care less. Better than any other film I’ve seen, Moneyball takes the viewer deep into the business of baseball: the cuts, the trades, the personality management, the deals and back-stabbing that the fans never have to confront and consider. Furthermore, it depicted all of this in the context of what was probably the most significant transformation to baseball management in a generation.

Based on the book of the same by Michael Lewis, the film shows, with dramatic liberty, the true story of the Oakland Athletics and their manager Billy Beane’s pioneering use of sabermetrics, a kind of advanced baseball statistics, to evaluate baseball prospects. I won’t spoil how well or poorly Beane’s strategy goes, so I’ll just end here with these two facts: Brad Pitt stars as A’s general manager Billy Beane and the movie also stars the late, great Philip Seymour Hoffman. 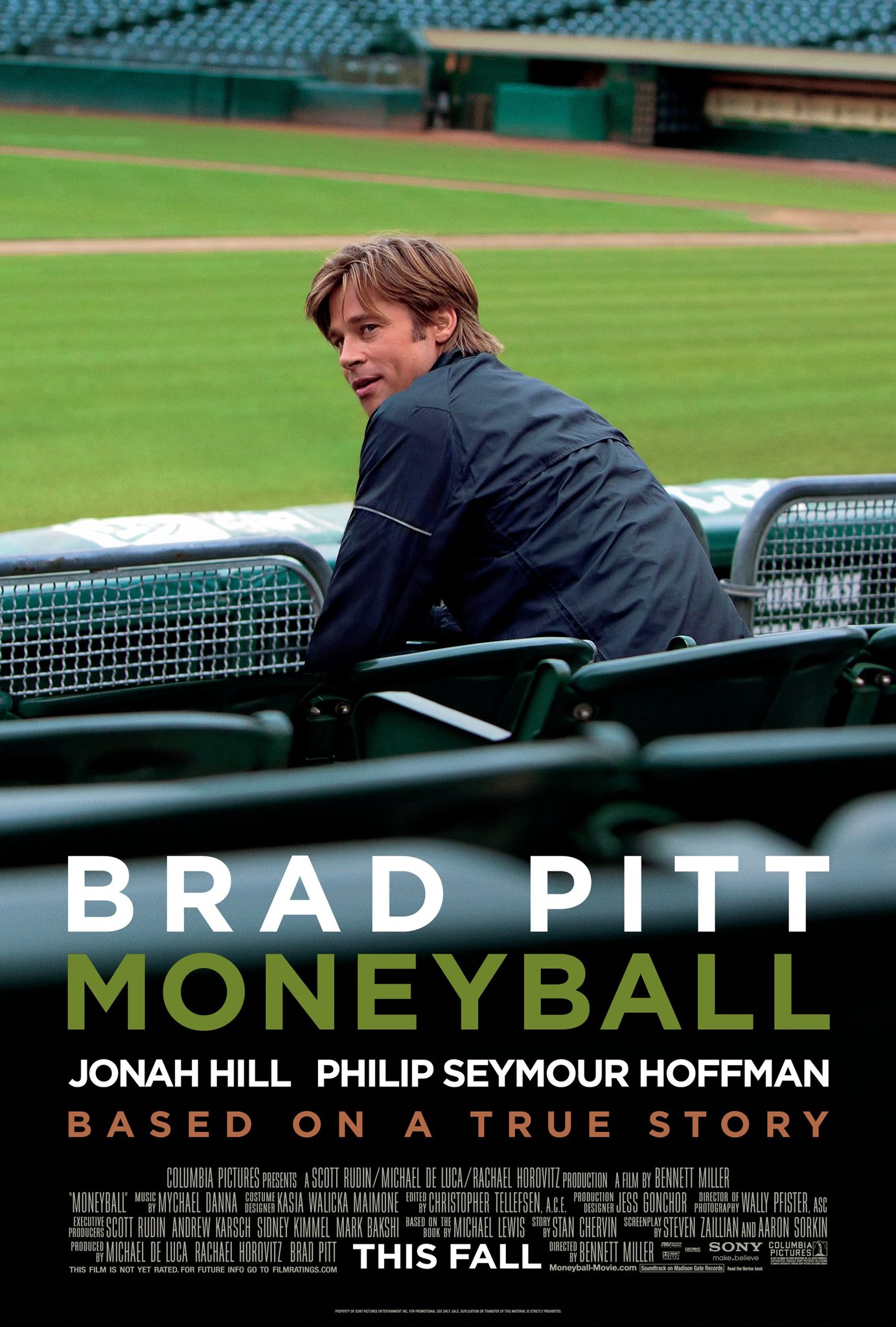 If you watch only one baseball movie on this list, make it Major League. The comedic film depicts the struggles of a hapless Cleveland Indians team to win the World Series despite obstacles from the team’s owner who sabotages the team in an attempt to move it to Miami.

Every player on the team is a total character, but the film handles them sincerely. Sure, every player gets his laughable moments but he also gets his triumphs. No player does that more for the movie than its main character, washed-up catcher Jake Taylor, played by Tom Berenger. Charlie Sheen, Corbin Bernsen, Rene Russo, Dennis Haysbert and Wesley Snipes fill out the cast, so if that’s not a strong indication of the baseball antics you’re in for, I’m not sure what would be. 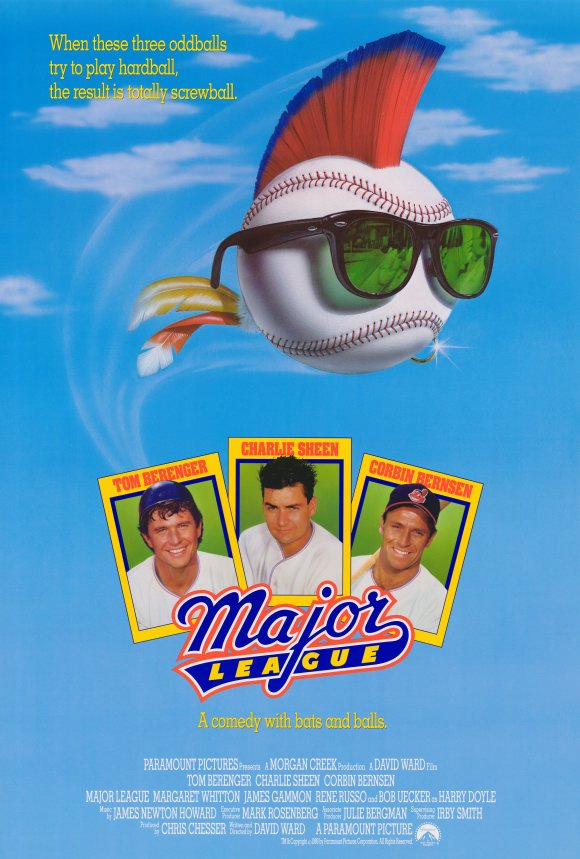 Kevin Costner (apparently a fan of acting in acclaimed baseball movies) stars as Iowa farmer Ray Kinsella who has a vision and hears the words printed above. This prompts him to build a baseball diamond in his cornfield and the rest of the story you’ll have to watch to find out. But I will say that the heavily baseball-influenced plot isn’t what makes this movie great and I think any person dealing with loss in their life will find Ray and his Field of Dreams worth rooting for.

Read More: The Best Movies Based on Real-Life Stories 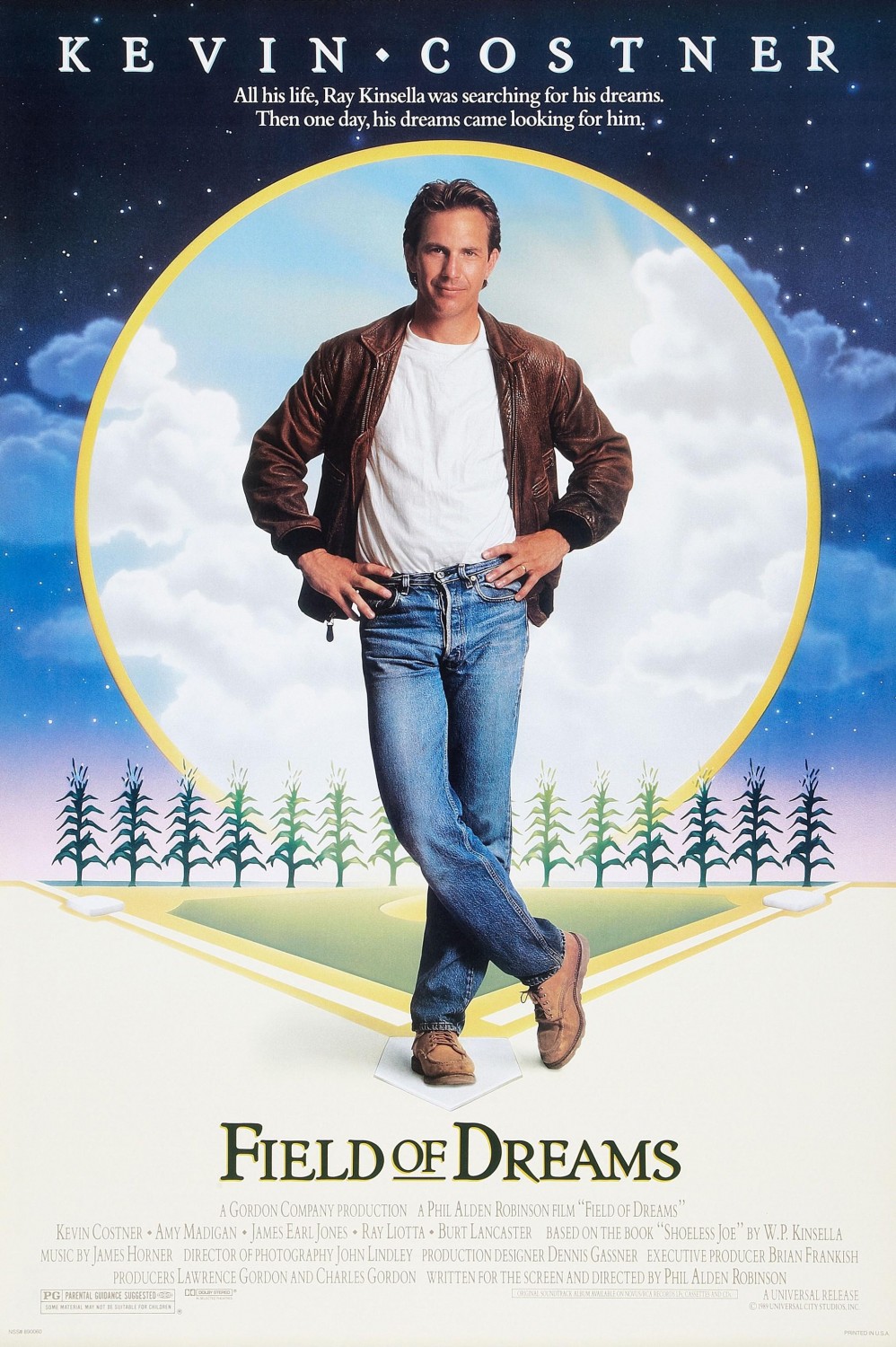 A League of Their Own depicts a little slice of history I suspect many non-baseball fans don’t know about: the creation and development of the All-American Girls Professional Baseball League during WWII, the first legitimate women’s professional league sport in the U.S.

In a highly fictionalized manner, the movie follows the women of the Rockford Peaches, including Geena Davis, Madonna (yes, Madonna) and Rosie O’Donnell, as well as their abrasive, alcoholic manager Jimmy Dugan, played by Tom Hanks.

The movie is funny and heartwarming and forever immortalized the idea that “there’s no crying in baseball.” 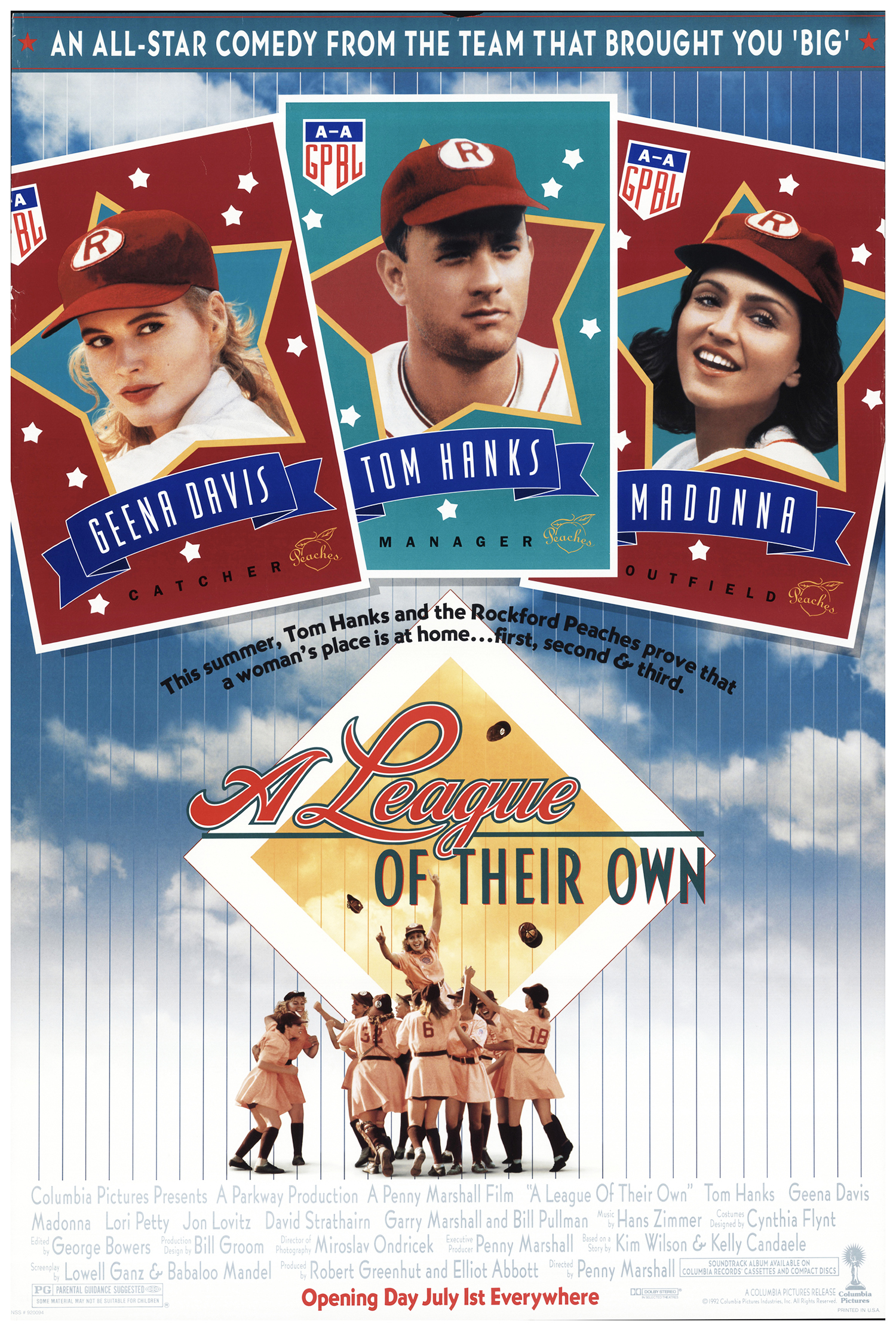 A League of Their Own, HBO Max

I may have spoken too soon about the baseballiest baseball movie, as The Natural, starring Robert Redford, could easily claim that mantle. Though baseball is the cornerstone of the story, it’s really a story about a man with God-given talent to be the greatest baseball player ever, what he does with it and what happens to him.

Though I’ve got this lower on my own list, The Natural is consistently ranked as either the best or second-best baseball movie of all time by “serious” critics. Though you’re more likely to find me watching Major League, The Natural is undoubtedly a baseball movie classic that plays just as well for purists and sports movie fans alike. 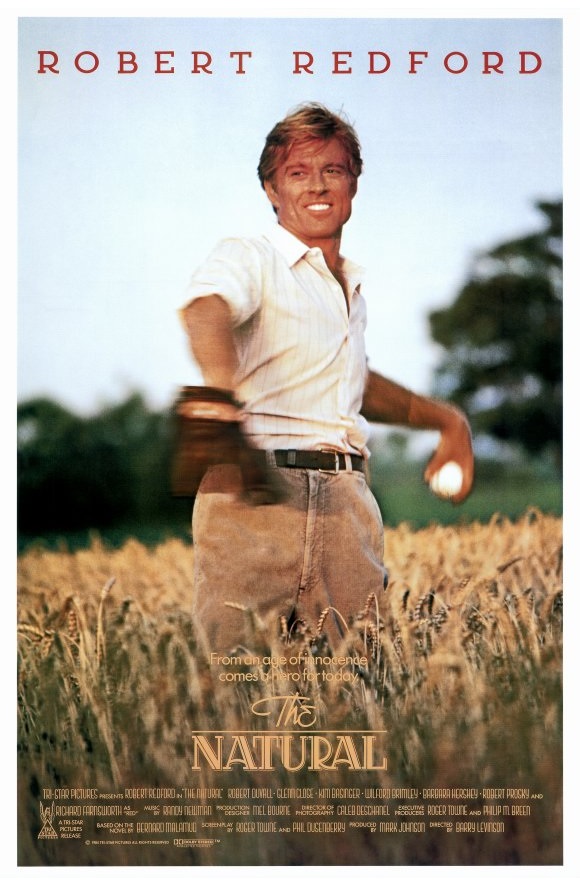 Perhaps memorable to most only because it stars a young Robert DeNiro, Bang the Drum Slowly ought to be remembered for its own merits as an excellent baseball movie.

At its core, the story is about male bonding, the men bonding just happen to be the starting pitcher and starting catcher for the fictional New York Mammoths. The film follows their ups and downs and how the ups and downs affect their relationship and the team. If you know anything about the plot, you might think this is another hackneyed melodrama, but it isn’t. This movie is genuinely touching and earns its tugs on the heartstrings. If Robert DeNiro didn’t have such a stacked filmography, Bang the Drum Slowly might be considered one of his best films and it remains to this day a must-watch baseball movie. 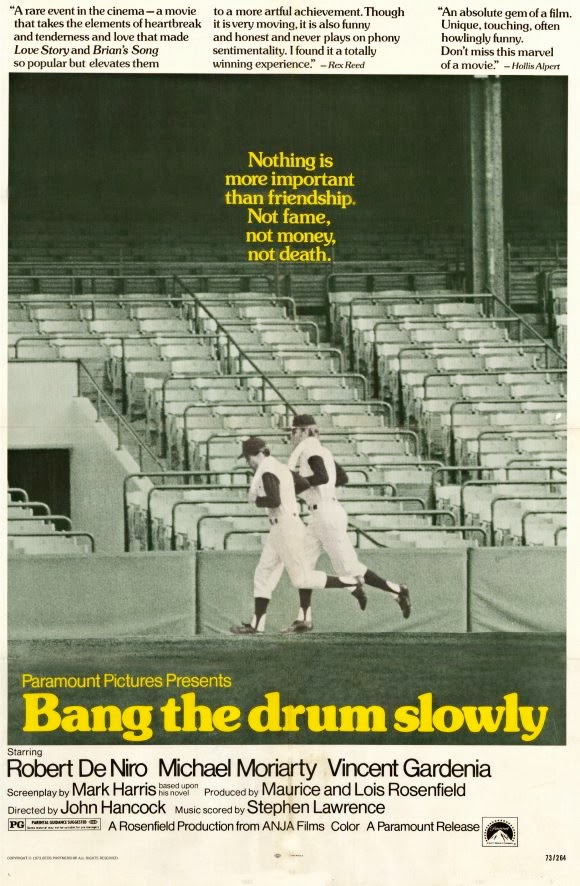 A true cult favorite, The Sandlot has a way of capturing your heart and just never letting go. Despite the fact it’s a kid’s sports movie, so many aspects of The Sandlot make it unforgettable in a good way. Perhaps viewers see themselves in the baseball-loving boys the story follows over the summer of 1962 or maybe it’s the sheer goofiness of the characters, the plot and the villain, a fantastically large, evil dog who steals the main character’s baseball signed by Babe Ruth.

Whatever it is, I promise you’ll find something to enjoy in The Sandlot, even if it’s only the amount of lines you’ll finally recognize after watching it. 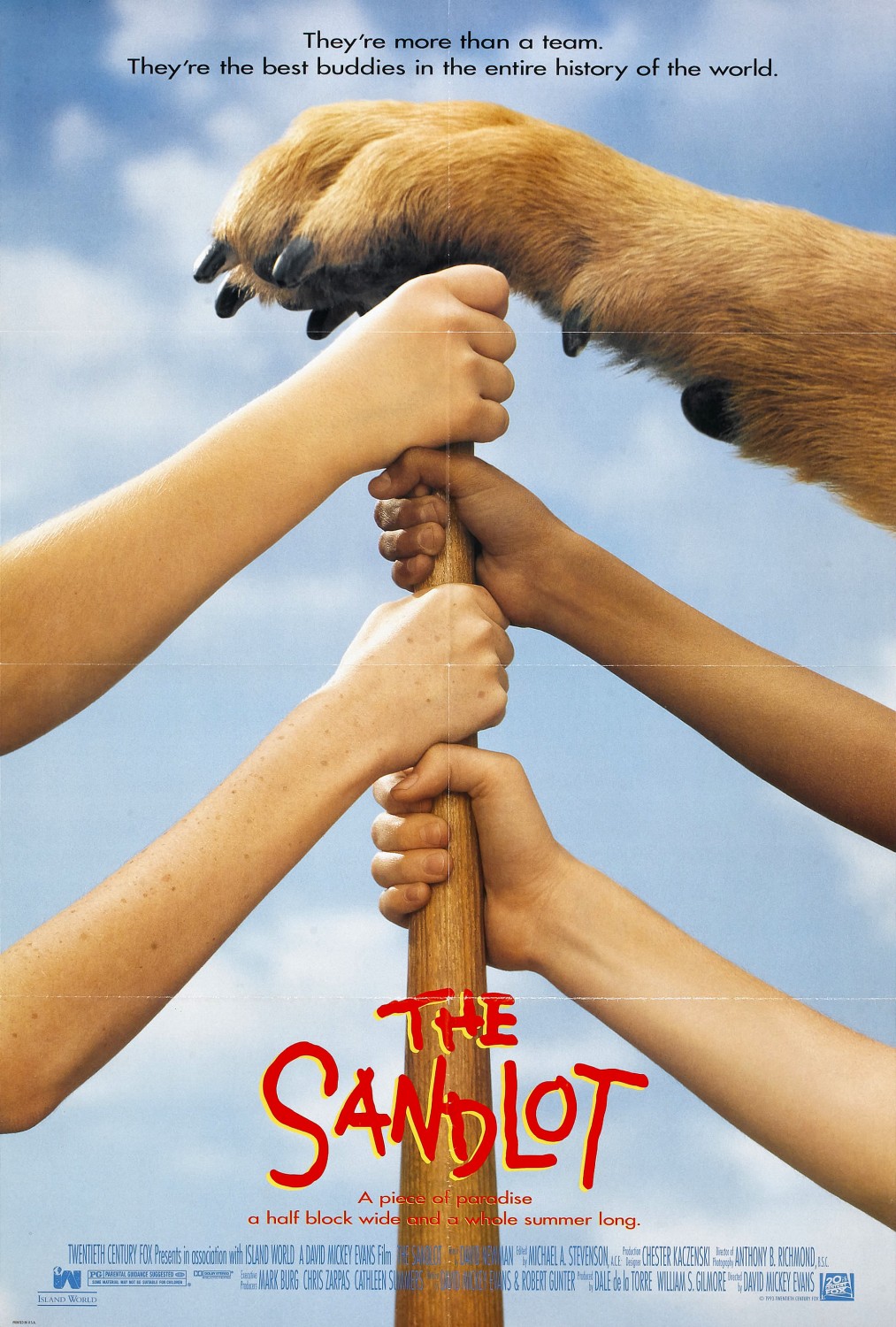 When people think of Jackie Robinson, the first Black player to play in the MLB, they tend to get all warm and fuzzy. “Wow, what a heartwarming story of racial integration that propelled America forward,” you’re liable to think.

42, starring the recently deceased Chadwick Boseman as Jackie Robinson, strips the veneer off that revisionist history. Imagine for one moment what it would be like to be in Jackie Robinson’s shoes. If you think it’d be a nightmare in which an extraordinarily talented Black man has to carry the weight of expectations while behaving 100% perfect so as not to justify his teammates’ racism toward him, you’d be right.

I’ll admit the movie plays it a little safe and may veer in occasional hagiography, but it’s a sports drama, not a documentary, and I don’t blame the filmmakers for focusing on the struggles of integrating baseball.

If you want to have some sense of who Jackie Robinson was, who he had to be and what he had to do to integrate baseball, 42 is as good as it gets. 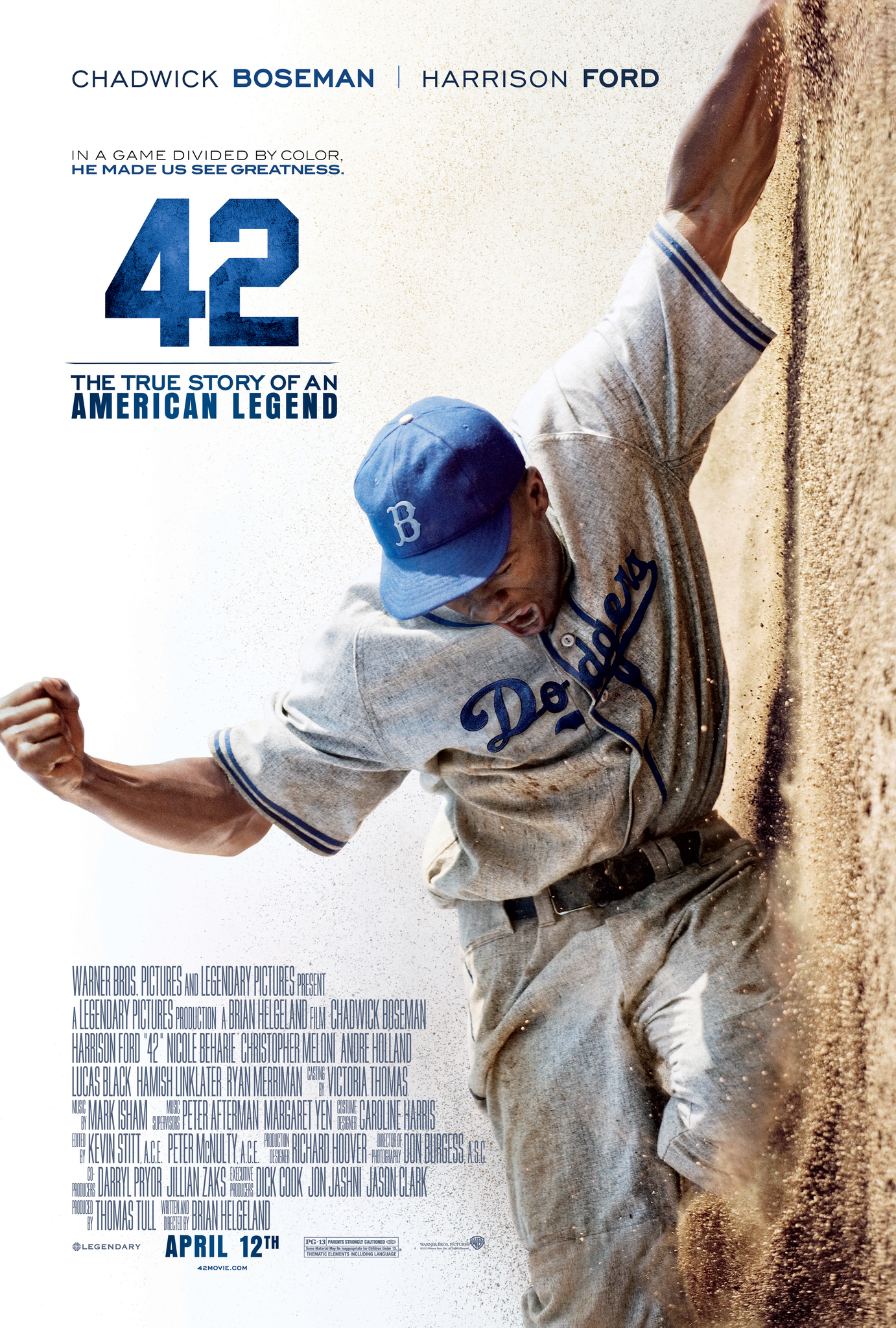 Arguably the most forgettable movie on this list (except for #11 which never appears on these kinds of lists), The Rookie is still worth watching for its straightforward, true story of a man who never gave up his dream to pitch in the MLB.

After a practice, Jim plays catch with the team’s catcher who tells him his fastball hits pro-level speeds. One thing leads to another and Jim gets a chance for a tryout. But for The Rookie, it’s less about the predictable story and more about the journey of this family man as he achieves his goal. Seriously, if you ever had dreams about being someone or something that you never had the opportunity to be, this movie will hit you right in the feels. 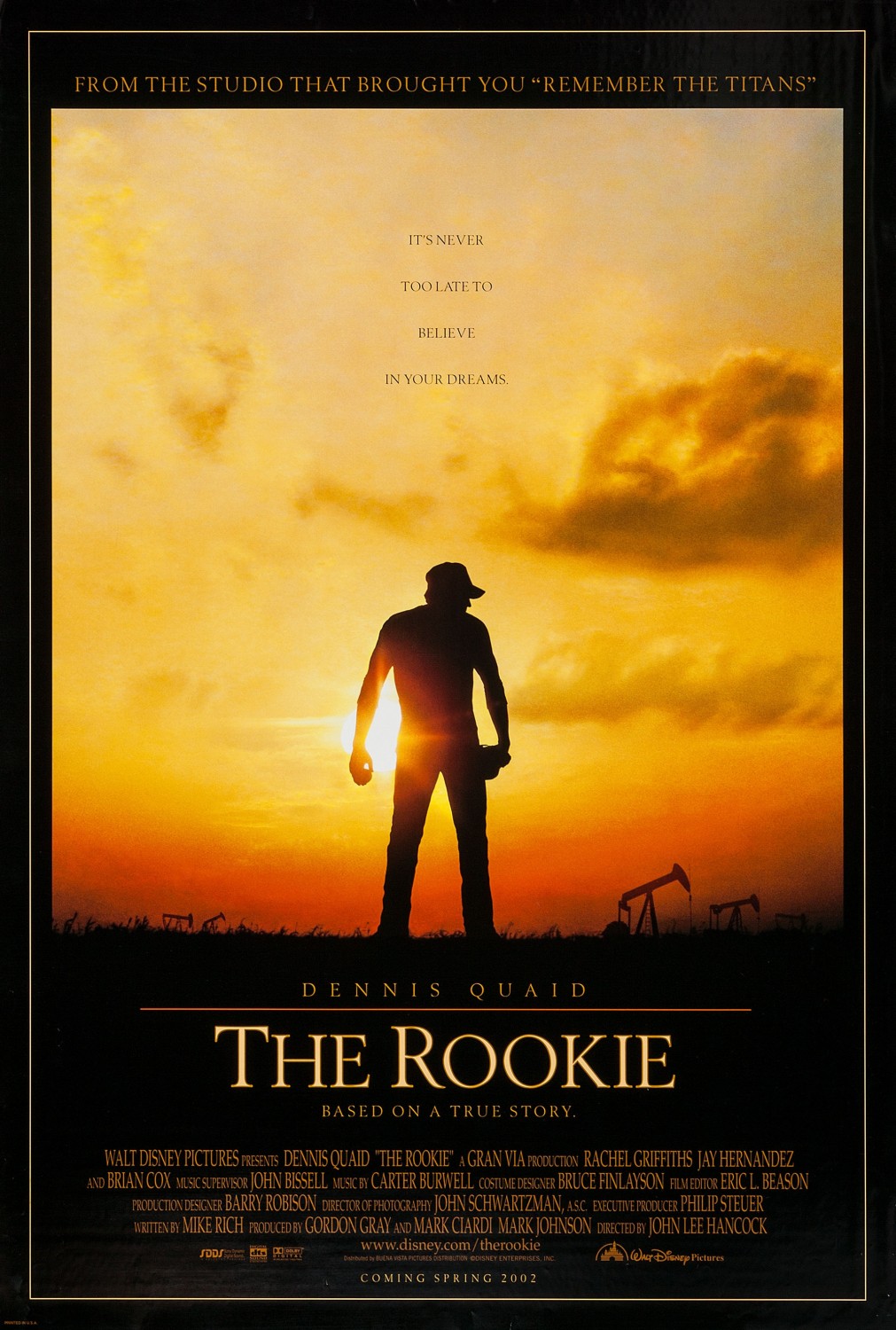 Screw Rotten Tomatoes, I love Hardball. Yes, it cheaply plays with my emotions but I don’t even care. A cross between The Bad News Bears and Boyz n the Hood with Keanu Reeves in the main role, the film seemed destined to be a critical failure.

Nonetheless, if you can overlook the trite sports film formula, the movie has genuinely touching and heartbreaking moments. The movie follows a gambling-addicted, indebted man who is forced to coach a youth baseball team and its young Black players. I’m certain you’ve already figured out the main plot points from that description (covert racism toward the kids, Reeves dating the players’ schoolteacher, etc …) but if you need to let a few tears out and love Keanu Reeves and baseball, this is easily the best baseball movie for you. 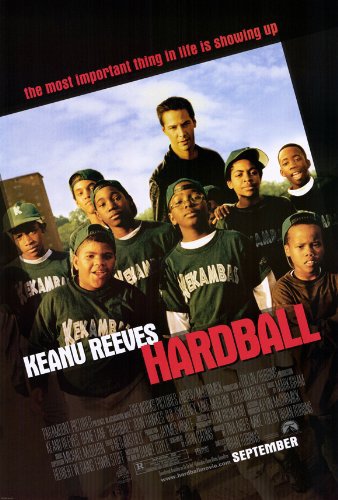 How to Watch NFL Games Without Cable or Satellite TV