Taking a break from our screens is essential for our mental, physical and emotional health. When your eyes need a rest from artificial light and you have free time to spend with a friend or family member, a board game is a great way to reconnect and have fun. We love playing Chinese Checkers, a game that has been around for more than 100 years and can be enjoyed by both children and adults.

Contrary to its name, Chinese Checkers originated in Germany. Based on the game Halma, Chinese Checkers is a more simplified version that tests a players’ ability to strategize. The game was initially called Stern-Halma and was renamed in the 1920s before being renamed a second time to Chinese Checkers as a way to appeal to a broader audience.

Chinese Checkers can be played with two, three, four, or six players who are all trying to get their pieces to the opposite corner of the board before their opponent. The game requires strategy and focus and is excellent for teaching problem-solving. Whether you want to revisit the game from your childhood or introduce it as a new option for game night, these are our top picks for Chinese Checkers sets.

For a traditional style board that will last for years, we recommend the CHH 15″ Jumbo Chinese Checkers with Marbles. The durable and heavyweight board is made from wood and comes with six sets of marbles for playing. The large size of the board makes it conducive to playing with a big group.

Pros: The set includes a small bag to use when storing the marbles.

Cons: There are no red marbles included with the board. 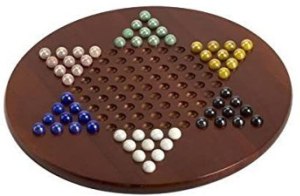 Whether you’re entertaining a big gathering or want to have options for game night, we recommend the Hey! Play! 7-in-1 Combo Game. The set comes with seven popular games, including boards and pieces to play Chinese Checkers, Chess, Checkers, Ludo, Backgammon, Dominoes and Tic-tac-toe. The affordable set is made using wood and plastic and all the boards and pieces fit together for compact storage.

Pros: Each board game is self-contained and all seven games can be played separately.

Cons: The set weighs almost six pounds, but the board sizes are smaller than average. 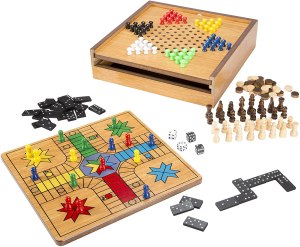 For a board that is fun to use at home or while traveling, we recommend the S&S Worldwide Chinese Checkers set. Instead of traditional marbles, the game comes with colorful pegs that fit securely into the board and won’t roll, making this a great option for using during long car trips or on uneven surfaces. The solid wood construction adds durability and each board comes with detailed instructions on how to play.

Pros: The board weighs only 2.4 pounds, another plus for using while traveling.

Cons: At 11.8 inches in diameter, this board is on the smaller side and not as conducive to playing with a large group. 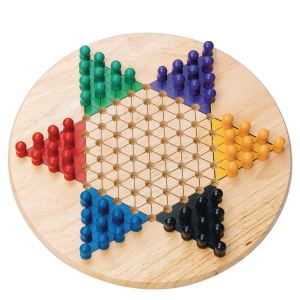 Get two games in one with the Schylling Tin, which includes a board and pieces for Chinese Checkers as well as Checkers. The lightweight material and compact size of the set makes this an ideal option for travel. The games can be played separately at the same time and each game comes with its own pieces and storage bag.

Pros: The old-fashioned tin is great for nostalgia lovers and is designed to look like board games from the past.

Cons: The marbles included for the Chinese Checkers game are plastic, not glass.