A cornhole set is something that’s easy to buy online, and it’s the perfect thing for backyard BBQs, beach parties, and any time you’re feeling competitive and want to bring out your inner child.

If you’re not familiar with cornhole, sometimes called bean bag toss, it’s a simple lawn game where two slanted boards with holes in them are placed opposite each other. It can be played one-on-one or in teams of two. Players stand by one board and take turns tossing a bean bag to the other board; the goal is to try to get the bag into the hole, which is worth three points. Landing on the board but not in the hole is worth one point. Traditionally, the game is won by scoring 21 points, which can take some time because of the game’s “cancellation scoring” system. According to the American Cornhole Association’s official rules, “the points of one player cancel out the points of their opponent.”

If you’re serious about making it as a cornhole player (before you ask, yes, there is a league) you’ll want to invest in a durable cornhole set to get some practice in. Otherwise, it’s easy to buy a set online and just have fun with it. Even if you’re not strictly playing by the rules, it’s still a good time. Cornhole is the perfect summer game because it’s an outdoor activity that doesn’t require too much physical exertion. So, mix yourself a margarita and give it a go with one of these cornhole sets.

Traditional cornhole sets are pretty big, so they can be difficult to carry and set up in places like the beach. These cornhole sets are regulation size but designed for convenience. The platform easily folds in half, and the sides have handles for easy carrying.

Pros: Lightweight but durable aluminum construction, folds in half for easy carrying and storage.

Cons: Some found that when the bags hit the board the board can move a little due to the lightweight construction. 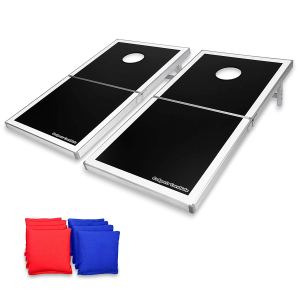 For a more traditional option, this 4 ft x 2 ft cornhole set is made out of solid wood. Since the surface texture can affect gameplay, players who are used to wood sets may appreciate this option more than the others. It comes with a carrying case and a drawstring pouch for the bean bags.

Cons: Some reviewers pointed out that the set is actually off the regulation size in height and size by fractions of an inch, which won’t affect casual players. 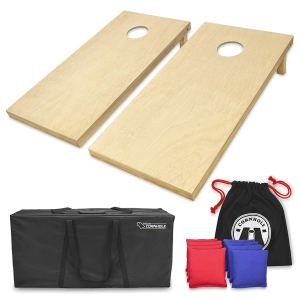 This option from GoSports might look pretty similar to other aluminum GoSports set, but it’s a more compact “tailgate” size (3 ft x 2 ft instead of 4 ft x 2 ft). It’s ideal for taking to the beach, tailgates, or any small or crowded outdoor space. It comes with a handy carrying pouch and is available in several fun patterns.

Pros: Tailgate size takes up less space and is more convenient, comes with a carrying bag.

Cons: Several reviewers found that the surface was slicker than most cornhole sets, which may be hard to adjust to for players who are used to wood sets. 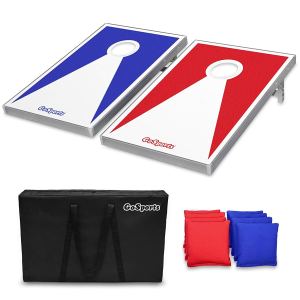