We may be living through something of a board game renaissance where there are more new board games than Netflix shows, but staples like 52-card decks, chess boards and backgammon sets will always deserve a place on your game shelf. After all, some of these games have a history dating back over a thousand years, so they’re unlikely to go anywhere anytime soon. Dominoes is another classic that’s great for game nights.

The gameplay mechanics of dominoes are simple, but that’s what keeps it entertaining. It might be your game this time, but the tiles may not be in your favor the next time around. And since it’s easy to learn and play, anyone can get in on the action. No need to spend 45 minutes thumbing through the rule book.

For such a basic game, there’s actually a lot of variety in game sets. Where a chess set always has 16 pieces, a dominos set can have as few as 28 pieces, and in one case below, as many as 136. A 28-piece set is called a “double six” because the highest piece is the one with two sets of sixes. Other common options include double nine and double 12. Another variant is known as “Mexican Train.” Mexican Train feature trains of dominoes that spread outward from the central hub and can go in a variety of directions. This is a great option because it adds a level of strategy and helps keep the gameplay from stalling.

You’ve probably seen stylish gift sets of tic-tac-toe or chess made from materials like brass, wood or marble. Unsurprisingly, dominoes have also gotten the luxury treatment. We’ve included some rustic dominoes sets made from rosewood, luxurious modern sets made with shiny gold finishes, as well as giftable sets inspired by famous artists. These are the best dominoes sets to buy on Amazon and beyond.

If you’re looking for an affordable basic set that you can use for Mexican Train or traditional dominoes, consider this set from Cardinal Industries. It includes a plastic hub, nine train markers, a scorecard, and an aluminum carrying case. It’s a double 12 set, totaling 91 pieces. The pips are colored as well, making it easier to differentiate between different numbers. 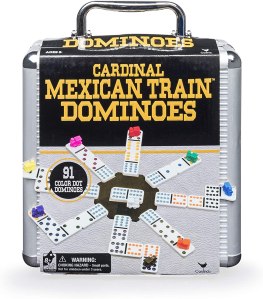 This option from CHH is a stylish, traditional option. The tiles are an ivory color with black inlaid pips, and the dominoes come in a wood box with a sliding top, similar to a matchbox. It’s a double-six game, meaning that there are a total of 28 tiles. It’s a basic set with a higher-end look than its price would imply. 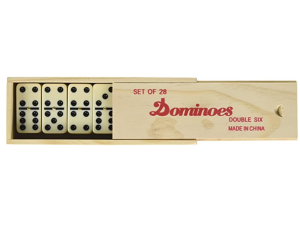 This set from Anthropologie has a modern, luxurious look. The pieces have a gold finish and are coated with transparent lucite. The pips are printed in the lucite, giving the impression that the dots “float” above the tiles. The tiles also come with a matching lucite display and storage case. This is a traditional double-six set, as 28 pieces are included. 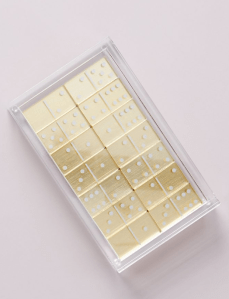 If giant Jenga is more fun than regular Jenga, why wouldn’t the same be true for dominoes? Turn this traditionally tabletop game into a lawn game with this giant set from Triumph. Each tile is a sizeable 7″ x 3.5″, and a zippered carrying pouch is included. The tiles are made from wood, giving this set that lawn game feeling. The pips are color-coded so it’s easier to find matching tiles. 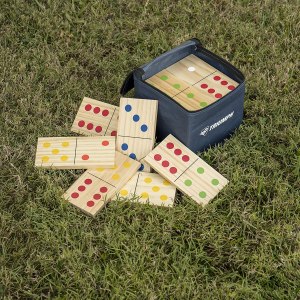 Celebrate one of America’s greatest pop artists with this dominoes set from the MOMA design store. This set is inspired by Keith Haring, and it replaces the traditional pips with some of Haring’s most iconic designs. It’s still playable, seeing as dominoes is more about matching than it is about the numeric values. The tiles are done in light wood with black and red prints, and it has a matching decorative storage box. 21 pieces are included, which is less than the traditional double-six set of 28. 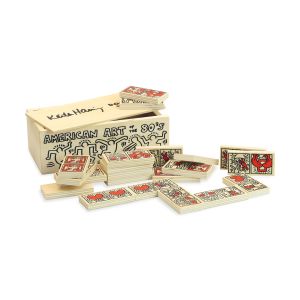 This set is a traditional size and tile color, but there’s one detail that makes it very unique. Instead of dots, this set uses Arabic numerals. The Arabic numerals, combined with the color-coded denominations, make it a lot easier to find matching tiles. That means that whether you’re a young child, visually impaired or you just want something that’s easy to see, this is a great set to get. There’s also a hub for Mexican train and train and chicken pieces for different gameplay styles. Plus, it’s all packaged in a convenient aluminum carrying case. 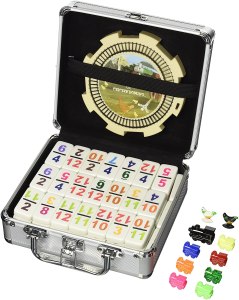 If you like to keep the game going for longer, consider this set from Regal Games. It’s a double-15 set, meaning this set has the most tiles of any of the options on this list. There are a total of 136 tiles. There’s also a wooden hub and train pieces so you can play Mexican Train, and there’s even a scorecard notebook for easy scorekeeping. The pips are color-coded, making it easier to keep track of the numbers. 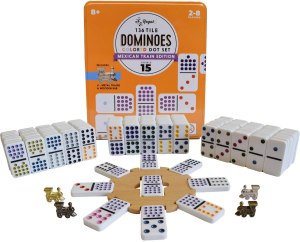 This set from West Elm looks like the kind of thing you might find in your Grandpa’s lakeside cabin. While many wooden sets are made from cheaper plywood, this set is made from rosewood, giving it a beautiful natural look and a grain that varies from tile to tile. It also comes with a matching box. The tiles are inlaid with brass-finished pips. It’s a traditional double-six set. 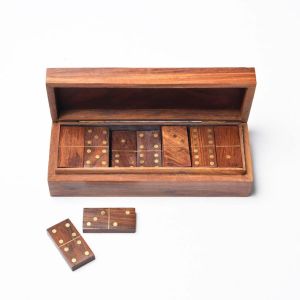