When it comes to pop culture collectibles, Funko POP! stands out from the pack.

Collecting merch from your favorite movies, TV series and music is a widely beloved pastime. It’s fun to acquire a collection over time, and quality merchandise provides a great way to decorate your home with stuff that you actually love. Finding good, affordable collectibles can be tough, however, but Funko POP! provides a reliable place to start. The best Funko POP! figures are equally at home as a desk toy for a serious businessperson, guarding a child’s nightstand, or sitting unopened in a hardcore collector’s secret stash.

Funko POP! started as a small nostalgia toymaker back in the ’90s, but after being sold in 2005, Funko has blown-up with a massive, ever-expanding line of figurines. Funko’s vinyl toys encompass just about every pop culture property around, ranging from Baby Yoda to Biggie Smalls and Michael Scott. In other words, there’s something for everyone. This wide-ranging inventory, plus an iconic aesthetic and affordable price tags, has made Funko a premier stop for collectors, casual fans and gifters alike.

If you’re looking to start a Funko POP! collection or find your next purchase, read on. Since there are thousands of Funko figures for sale, we’ve rounded up some of the best Funko toys currently available on Amazon, representing the absolute best in pop culture. From Game of Thrones and Star Wars to ’90s hip-hop, these are the Funko figures to know.

Baby Yoda fever may have wanted slightly, but The Mandalorian Season 2 trailer is sure to remind us why we love this little green guy. As hardcore Star Wars fans are a little too quick to point out, Baby Yoda is not literally the Yoda we know and love. And, technically, he’s known as “The Child”, not Baby Yoda, which is the nerdiest distinction since the days of “Frankenstein is the doctor, not the monster.” But whatever he’s called, he’s still the cutest creature in any universe. Funko dolls are notable for their oversized heads, but since Baby Yoda’s head is so enormous compared with his body, this figure almost looks like it was made to scale. Here, he’s holding a hot cup of bone broth and swaddled in comfortable blankets. 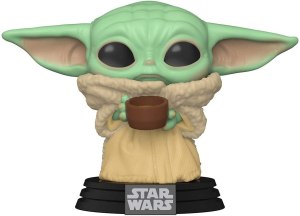 Avatar: The Last Airbender is enjoying a major resurgence thanks to its arrival on Netflix as well as the general appetite for nostalgic media. For a kid’s show, Avatar is one that touches on tough (and relevant) themes, ranging from genocide to totalitarianism to the cost of war. But the lovable characters are the heart of Avatar, which is why the show never loses its sense of joy. That’s evidenced by this cute combination of Aang and Momo, the beloved flying lemur. Momo can be removed from Aang’s head, so the Avatar can stand on his own, allowing details like the swirling air current and staff to be fully appreciated. 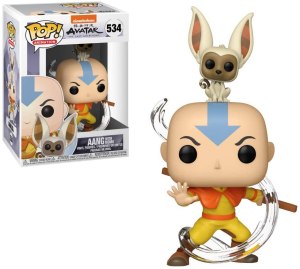 For an octogenarian, the Dark Knight is in remarkably good shape. Funko released a commemorative collection marking Batman’s 80th anniversary, which was in 2019. The collection celebrates some of the iconic eras of the Caped Crusader, including everything from his first comic book appearance to George Clooney’s controversial take. This particular figurine is modeled after Michael Keaton’s first turn as the World’s Greatest Detective in Tim Burton’s Batman (1989). There have been many actors to don the cowl since, including Robert Pattinson in the as-yet-unreleased The Batman, but Keaton’s incarnation remains a fan favorite. That’s why any Batman fan is sure to enjoy this figurine. 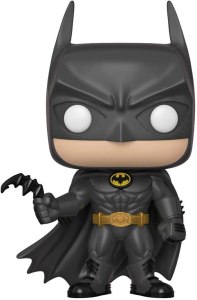 There are tons of great Spider-Man toys out there, but this Funko figurine is one of our favorites. It’s modeled after Spider-Man’s latest cinematic form, as played by Tom Holland in Spider-Man: Far from Home. Spidey is seen perched atop (probably) a New York skyscraper while snapping a selfie. 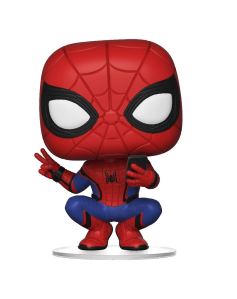 The King of Rap is still a highly disputed title, but New York’s B.I.G. has a compelling claim to the throne. When Biggie died at just 24, the rap world lost a certified GOAT, but now you can remember the legend in your home with this figurine. The doll captures Biggie wearing his Timberland boots, jersey and gold chain while preparing for battle, mic in-hand. 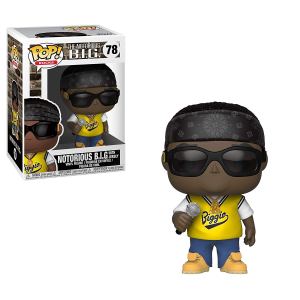 Just binged the ESPN docuseries The Last Dance, and want more Michael Jordan? Then pick up this Funko that features His Airness in the 23 jersey holding a basketball. Most Funko dolls are grounded on two feet (or in a vehicle), but Funko had to do MJ justice by putting him in his natural habitat: the air. MJ is seen flying through towards the hoop in his Bulls outfit, ready to slam one home for Chicago. 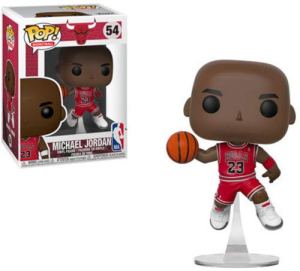 Boba Fett — the original Mandalorian from The Empire Strikes Back — gets a green chrome treatment in this limited edition Funko figurine. The figurine was created for the summer 2019 Funko convention and makes a standout addition to any collection. Despite his brief appearance (and unfortunate death) in the original trilogy, Boba Fett remains a fan favorite, and the warrior society of Mandalorians has garnered renewed interest thanks to the Disney+ series. 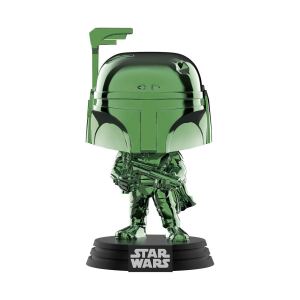 The final season of Game of Thrones may have left many fans disappointed, but Arya’s role cemented her as the MVP of GOT. Arya gets brought to life in her most important moment, wielding a two-headed spear during the Battle of Winterfell. If you’re still sad about Game of Thrones coming to an end (like we are), this is a great way to celebrate one of the best TV shows ever created. 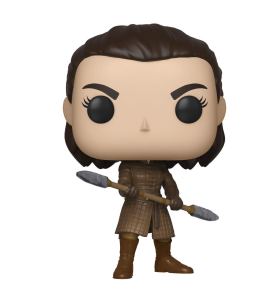 With the incredible success of Bohemian Rhapsody, Queen’s leading-man Freddie Mercury is now an icon of multiple generations. This Funko doll depicts Freddie in the getup he wore while performing at Wembley Stadium in 1986. He sports a golden coat over a white belted jumpsuit and leans over an attached microphone. 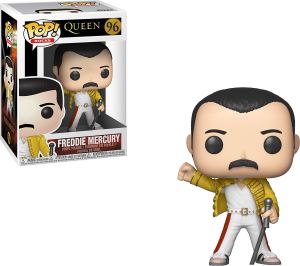 Mr. Roger’s Neighborhood may have ended two decades ago, but the 2018 documentary Won’t You Be My Neighbor and the 2019’s narrative film A Beautiful Day in the Neighborhood reminded us of the important lessons of love and acceptance during a divisive time. This Funko doll has Fred Rogers in his most recognizable outfit (colorful cardigan, canvas sneakers and slacks) and holding a model of the Neighborhood Trolley. If you’re feeling down, this Funko will remind you that you are liked, just the way you are. 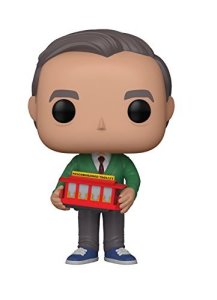 Thought toys couldn’t be scary? So did we . . . until we saw this Pennywise Funko doll. The figurine shows the world’s scariest clown as he’s depicted in the blockbuster movie It, holding two spider legs. It’s perfect for any horror lover and collector, but maybe put it away if any kids come to your house. 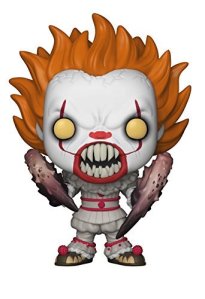 Marvel’s dirtiest, funniest, most outcast superhero gets the Funko treatment with this doll. The figurine has Deadpool on a red scooter as he’s seen in Ryan Reynolds’ Deadpool 2, and includes hilarious details like an ‘I love chimichangas’ sticker on the scooter. 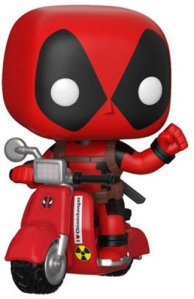 The Millennium Falcon is paramount to Han Solo’s character (it’s the reason Obi-Wan hires him in the first place), so it makes sense that his Funko doll comes with the Falcon for Han to helm. Han has always been a fan favorite of the Star Wars universe, which is why he got his own movie back in 2018 with Solo: A Star Wars Story. This Falcon set costs more than a standalone Han Solo Funko, but it’s a fair price to own the ship that made the Kessel Run in under 12 parsecs. If you’d rather pair Han with his BWF (best Wookie forever) Chewbacca, you can buy a figurine that features Han and Chewie the way they should be — together. 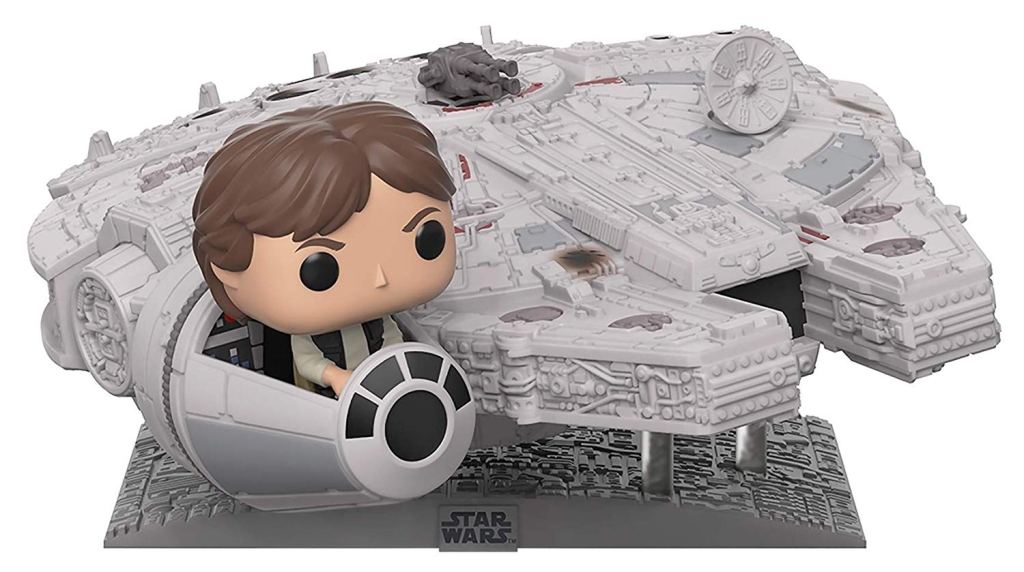 Funko is best known for its association with comic book and sci-fi fandom, but there truly are Funko’s for everyone, including fans of classic films. This Funko represents The Shining‘s Jack Torrance, as immortalized by Jack Nicholson. Here, he’s already gone insane and is wielding a bloodied ax and has dark, sleep-deprived eyes. Details like his distinctive corduroy jacket and disheveled hairdo make this a great collector’s item. This Funko also comes in the “Chase” variant, which features Jack after he’s been frozen, and the one you receive can vary between the two. Keep this Shining Funko at your office desk as a reminder that all work and no play will make you a dull boy. 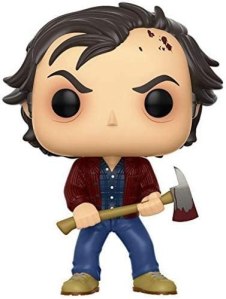 Fans of Parks and Rec know that beneath Ron Swanson’s gruff exterior is one of the most compassionate characters on TV, which is why Nick Offerman’s mustachioed character has become an enduring fan favorite. Here, he’s holding a mug and wearing his uniform of sensible slacks and a long-sleeve polo. Of course, this figure captures the features that make Ron Swanson Ron Swanson: the bushy stache and disapproving grimace. 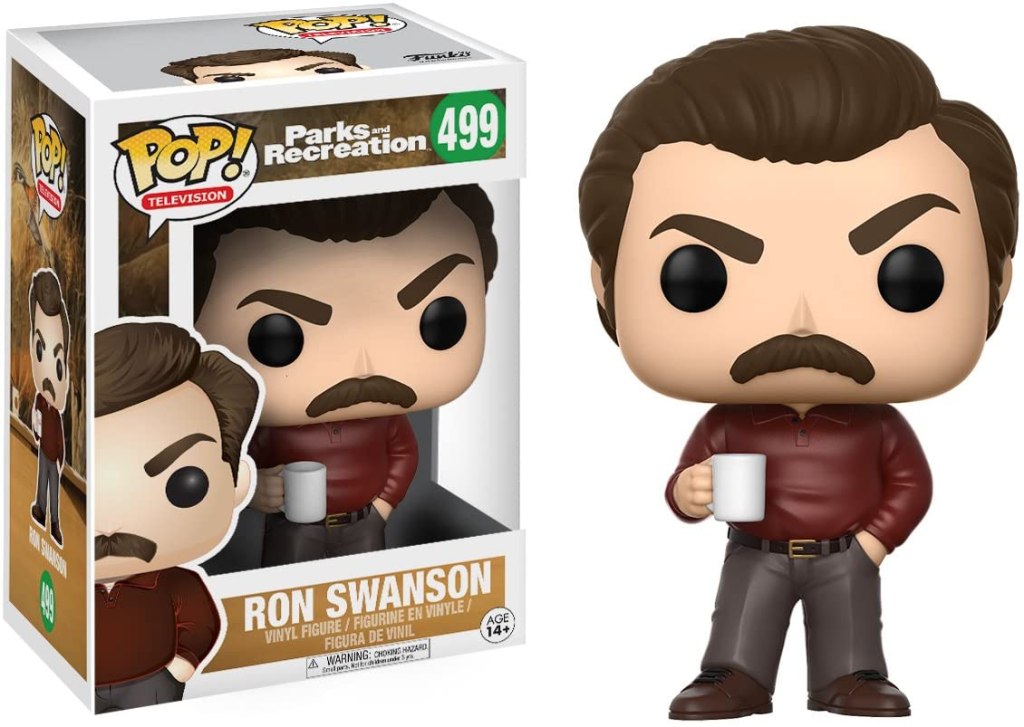 Jaunty cane, safari hat, immaculately tailored white suit, and oversized pink sunglasses. Who else could we be talking about besides Rocketman himself, Elton John? Here, he’s wearing the outfit that was featured on the cover of his Greatest Hits album, and his pose embodies the pomp and attitude that defined Elton John’s career. The attention to detail is impressive, down to the patterned bowtie and figurine lapel pin. Whether you came to his music through 2019’s Rocketman or you were actually there at that Troubador show, you’ll be sure to enjoy this Elton Funko Pop. 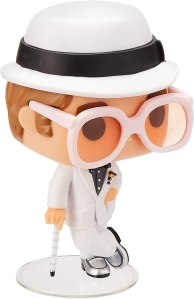 Bring everyone’s favorite terrible boss, Michael Scott, into your home with this Funko figurine. While you can get Michael in his typical outfit with his mug, we prefer this special edition Funko doll depicting Michael as his date-night self. He’s sporting a backward hat, an unbuttoned shirt and a pool cue (that he probably doesn’t know how to use). It’s an Office outfit that any fan will recognize, and undoubtedly make them want to rewatch the classic episode. 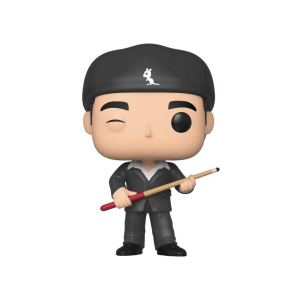 The Best Lego Sets for Adults, Because Grown-Ups Need Toys, Too