We’ve all had a little bit more time on our hands than we may have wanted over the past several months. This has led many to question how their spare time is best spent. For car lovers and petrol heads, we think the best way to spend time is with one of the best LEGO car sets available.

Constructing one of these fun-filled and often challenging kits really gets the technical parts of your brain firing. Completing the task and placing those final bricks results in a warm fuzzy feeling which is much more rewarding than watching TV. There’s also a style of car to suit every preference, no matter whether you love speed, style or harsh conditions. Some of the various types of LEGO car styles include:

The best LEGO car sets can often be a great way for families to bond, too. Whether you’re a child and an adult, two adults or any other combination, there’s a car model to suit your needs. And while we have thrown in a couple of LEGO kits aimed at kids, these sets are really aimed at older teens and adults who love nothing better than cracking open a box and building away. Plus, the completed car can often be used as an attractive and eye-catching piece of home or office decor.

Scroll down to discover our 16 favorite LEGO car sets which are more than worthy of your time.

There are few cars on this list that will elicit as much giddy excitement as the new LEGO Creator Ghostbusters ECTO-1. Recently released, this vehicle is, of course, inspired by the legendary Cadillac from the 80s original movie. Even better, the model is crammed full of little details to get your inner child screaming with excitement, including a proton pack, a gunner seat and the instantly recognizable Ghostbusters logo. What better activity can you think of than sitting down with this set and watching the classic on-screen. 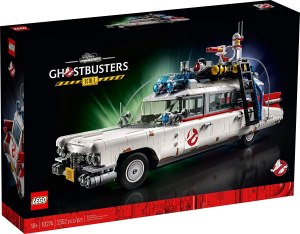 At under $20 and with over 5,000 five-star ratings, there is no better budget-friendly build guaranteed to put a smile on your face than the LEGO Speed Champions McLaren Senna 75892 Building Kit. This fantastic model includes interchangeable wheel rims, a minifigure cockpit, logo stickers and a wind tunnel which lets you play with your very own car development process. It’s a quick yet fun build for adults or a great way to inspire young car enthusiasts. 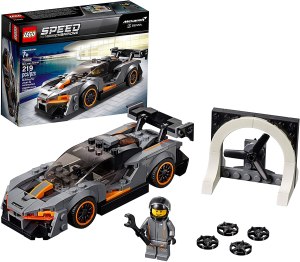 While they may have to wait a good number of years to get behind the wheel of the real thing, this LEGO Speed Champions 76895 Ferrari F8 Tributo Building Kit is the ideal “until then” gift idea for fast-car-loving kids. That’s why the 275-piece set is one of our favorite gifts for kids. When fully assembled this Ferrari is great for staging your own races and comes with its very own racing driver minifigure. Additionally, this beautiful car features a range of realistic features and also makes a funny consolation gift idea for friends and partners who dream of owning a Ferrari but likely never will. 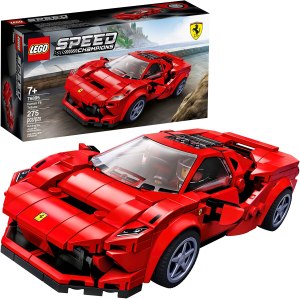 The LEGO Technic Dragster 42103 Racing Toy Building Kit adds an extra dimension of fun by sporting a pull-back mechanism that propels the car across the floor. The 225-piece dragster comes accompanied by a set of race-starting lights for more realistic imagination play. Furthermore, when you’re bored with the dragster, you can build a second racing car model as this is a two-in-one kit. 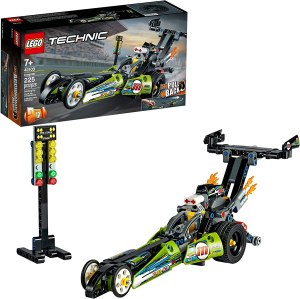 If you prefer cruising around on two wheels over four, you’ll definitely want to add this LEGO Creator Expert Harley-Davidson Fat Boy to your LEGO collection. This 1,023-piece set is great for teens and adults looking for a fun build. Plus, as the completed bike measures 12 inches in length, you’ll have an eye-catching display piece to enjoy on your desk or shelf afterward. Outstanding features include tear-drop fuel tanks, a built-in speedometer and dual exhaust pipes. 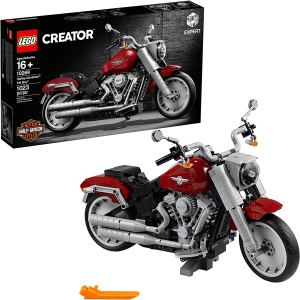 Even if you weren’t born when the first of these beautiful cars were all the rage, it’s still easy to see from this LEGO Creator Volkswagen Beetle 10252 Construction Set why they were so popular. In this expert-level model, you’ll be able to recreate your very own beach-ready car with a functioning trunk and hood. Additionally, you’ll find working doors, a removable roof, a surfboard and a cooler for roof mounting. 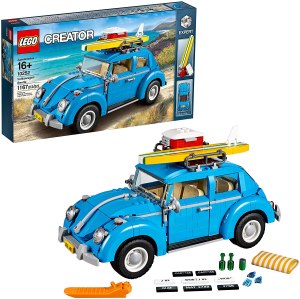 If you’re a fan of the massively successful Fast & Furious film series, you’ll instantly recognize this LEGO Technic Dom’s Dodge Charger 42111 Building Set. The supercharged Dodge Charger kit has 1,077 pieces, making it a great challenge for advanced young builders and adults alike. And, perhaps best of all, you’ll be able to reenact some of your favorite Dom-led car chases from the franchise or keep the piece as an eye-catching display piece. 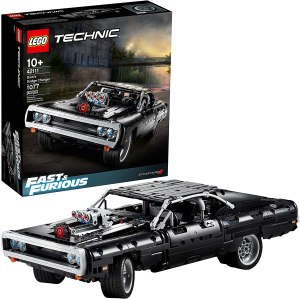 If you’re less about speed and more about function, you may want to check out this LEGO Technic Concrete Mixer Truck 42112 Building Kit. The smart design includes all you could want in a fun, LEGO-sized version of the construction vehicle, like the rotating mixer drum and functioning pistons. This is a great choice for parents and kids looking for a fun kit to build together or anyone who enjoys reality-based imaginative play. 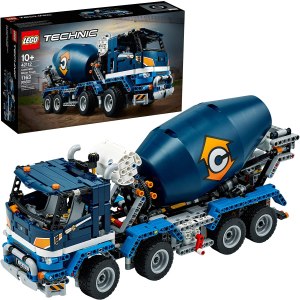 Why not build your own remote-controlled car with this LEGO Technic Top Gear Rally Car 42109 Building Kit? Once completed, you can download the app and use your phone to turn right, turn left, accelerate and brake. You’ll also have a range of sound effects to accompany your driving for a more realistic and immersive experience. It’s a great Christmas gift idea for budding engineers as well as kids and adults who love rally cars. 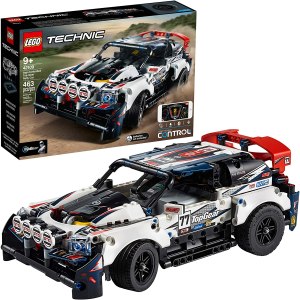 The LEGO Creator Expert Ford Mustang is a great way to give your technical mind a fun workout. The 1,471-piece kit comes with a 16+ rating because of its technical nature. The dark blue bodywork gives the car a classy finish worthy of being displayed, while the detailed interior, rugged tires and V8 engine only add to the realistic look. Furthermore, you’ll be able to choose between a number of customizable add-ons which include a range of number plates to pick from. 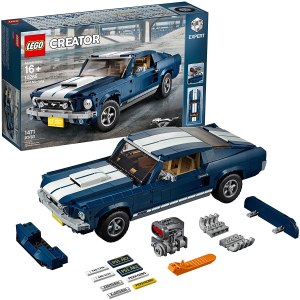 The LEGO Creator 10220 Volkswagen T1 Camper Van Building Kit is the second noteworthy VW vehicle on our list. It comes with positive reviews from over 95% of builders who love its retro feel. This fun creator model of the 1962 classic includes a range of functioning elements, including a pop-up roof, textile curtains, a “boxer” engine and a V-shaped color split. Plus, the realistic design continues inside where you’ll find folding furniture and a rear seat that transforms into a bed. 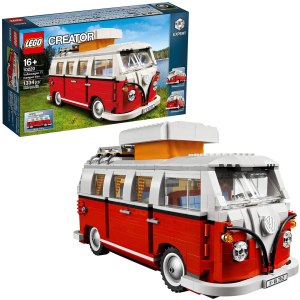 If you’re more interested in vehicles capable of handling harsh conditions and off-road environments, then the LEGO Technic Land Rover Defender 42110 Building Kit is definitely the choice for you. This comprehensive 2,573-piece kit features a range of realistic details, including a four-speed gearbox, gear selectors, a removable roof rack and fully turning wheels. It’s also a sizable vehicle as it measures eight by 16 by seven inches, making it ideal for indoor-outdoor adventures as you work your way over rough terrain and slippery surfaces. 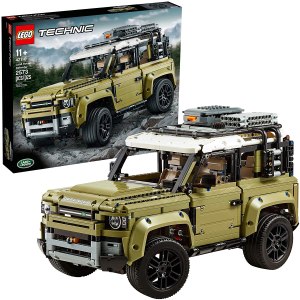 Arguably the most recognizable car on our list (we did say arguably!), the Aston Martin DB5 has become synonymous with James Bond’s character. Last appearing in Spectre (2015) and soon to appear in No Time To Die (2021), this is a must for any Bond fans. You’ll love putting together this accurate 1,295-piece replica, which is more than just a shell, too. It includes a range of 007 gadgetry, like front-wing machine guns and a trigger ejector seat. 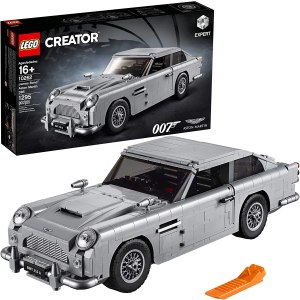 With 3,599 pieces to work your way through, you’ll get plenty of hours of fun with this LEGO Technic Bugatti Chiron 42083 Race Car Building Kit. Modeled on one of the world’s fastest commercially available cars, this realistic-looking car measures 22.5 inches long and includes a detailed W16 engine, functioning suspension, an eight-speed gearbox, unique wheels and disk brakes. Additionally, you’ll find a fun extra in the form of an overnight bag which can be stored in the car’s front trunk. 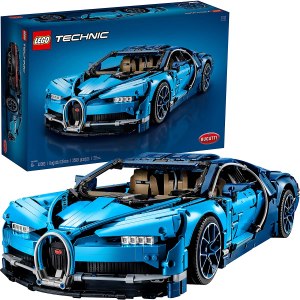 Owning a supercar is a dream for a lot of people. So owning this LEGO Technic Lamborghini Sián FKP 37 Model Car Building Kit may go some way (kind of) into fulfilling that need for something that feels so special. This fancy LEGO kit comes in its very own lime green, Lamborghini-inspired box for an exclusive feel. Outstanding parts on this LEGO car include a unique serial number for every vehicle, an opening front and rear hood, detailed disk brakes and golden rims. In addition, at 23 inches long, it’s a sizable piece for display or for driving around your home floors. 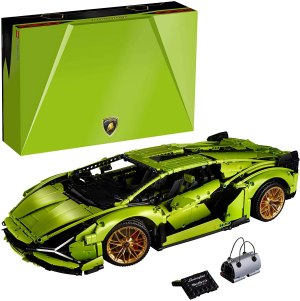 Granted, Superman doesn’t need a car, but we’re confident that if he did, it wouldn’t be as cool as the LEGO Superheroes 76023 The Tumbler. This impressive kit, which is now discontinued, is made up of 1,869 pieces and features a range of true-to-life parts, including an armored exterior, huge rubber-tread tires and adjustable top wings. Outside of being a stunning display piece (which includes an accompanying fact sheet), you’ll also find Batman and Joker minifigures which allow for playing out nearly endless scenarios in imaginative play. 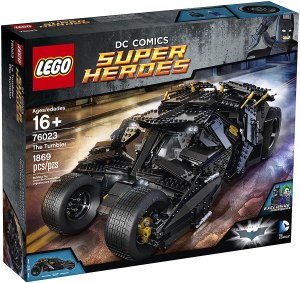 Want a Challenge? Lego Debuts its Largest Set Ever: The Roman Colosseum