Since the late 1980s, Nerf blasters have entertained kids across the USA. If you think about your childhood, you can likely remember an epic Nerf battle or the Christmas or birthday when you received the newest, coolest Nerf gun to add to your collection.

Few toys have had such staying power, and their continued popularity can likely be attributed to the fact that the brand continuously redesigns their “guns.” In fact, there are currently 13 major series of Nerf guns (among dozens of sub-series and discontinued lines), including:

Today, Nerf guns are still among the most asked-for toys for adults and kids. If you’re in the market for one of these fun makers, consider the 12 best nerf guns currently available. Keep reading to learn more about these well-reviewed blasters.

There are a number of Nerf weapons inspired by the popular online video game, Fortnite, and this Nerf Fortnite Sp-R & Llama Targets is the best of them. The set includes the pistol-style gun along with three differently sized targets which let you compete with friends and family or practice your aim before taking on moving targets which shoot back. The gun uses a three-dart internal clip and comes with six official Nerf Elite darts that are made from flexible foam. 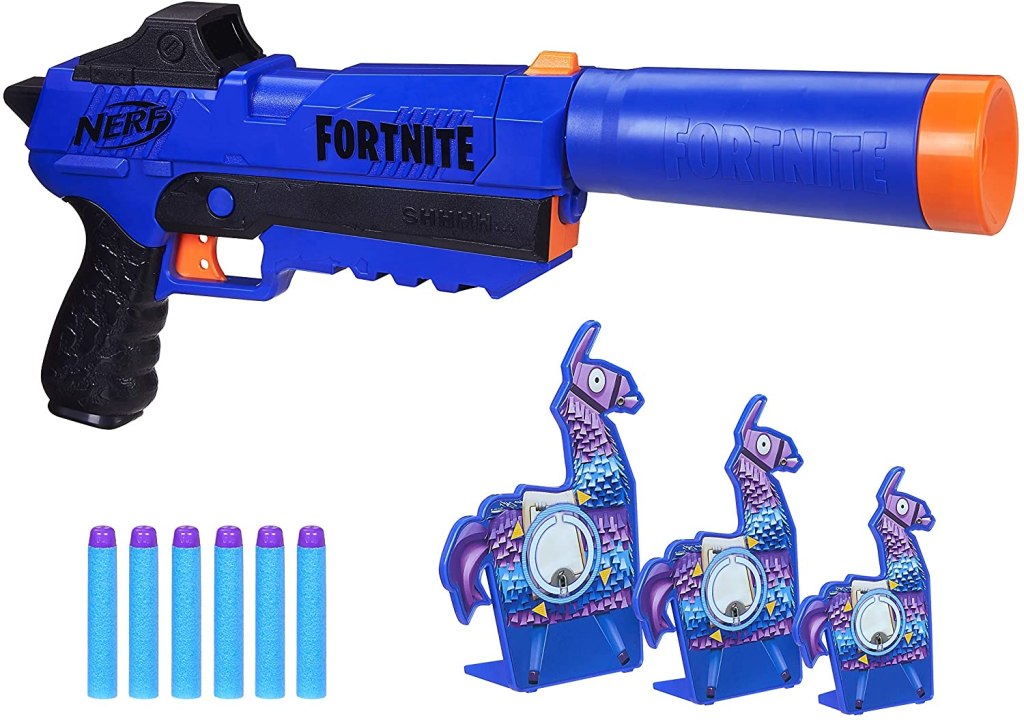 The Nerf MicroShots Marvel Captain America combines two of the best things out there: Nerf guns and Marvel superheroes. This budget-friendly pistol sports a Captain America-inspired color scheme along with a shield decal on the side. It also comes with two Marvel-branded darts that are fired on a one-by-one basis. Furthermore, as part of the collectible MicroShots series, there are numerous other, similar options to add to your collection. 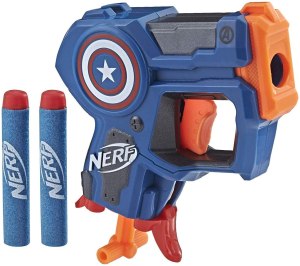 While it may be a little bit chunkier than its Western-movie counterparts, the Strongarm Nerf N-Strike Elite Toy Blaster still captures the look of a classic revolver. The design includes a flip-open, rotating barrel and comes in three different color schemes. Function-wise, it’s capable of firing six darts in a row at a maximum distance of 90 feet. Additionally, the gun ships in frustration-free packaging which is easier to open and better for the environment, too. 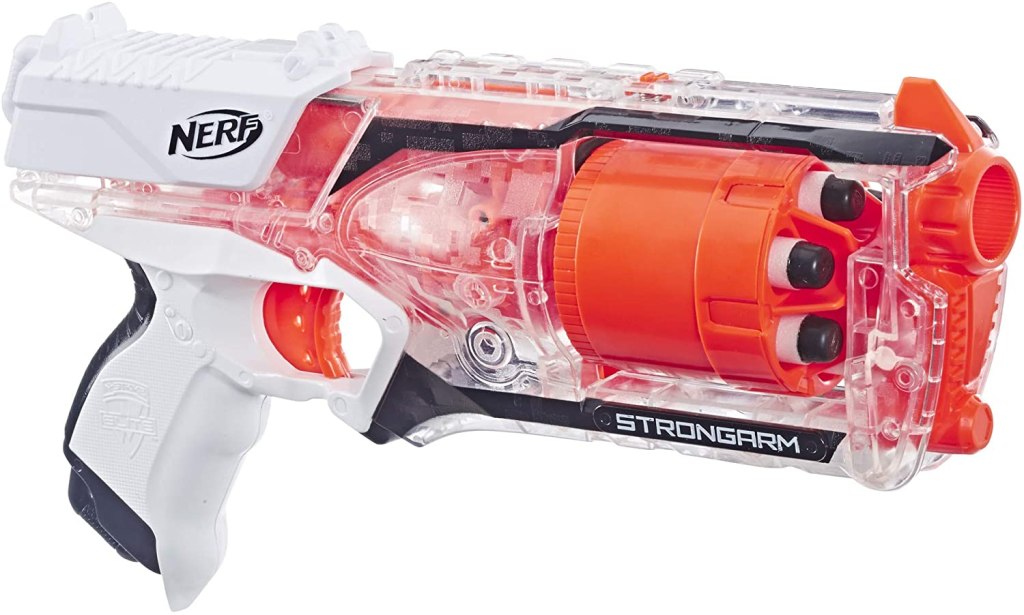 For a unique look when you step on the Nerf battlefield, add the Nerf Zombie Strike Alternator Blaster to your arsenal. This multi-barrel weapon can fire in three different directions and includes moveable barrels that provide a quirky way to take down your enemies. The six barrels can each hold one of the 12 official Nerf zombie Strike Elite darts, meaning you’ll have a full spare set for reloading. The blaster requires no batteries and only needs priming before you pull the trigger to launch the darts at your helpless undead foes. 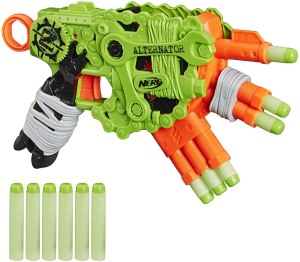 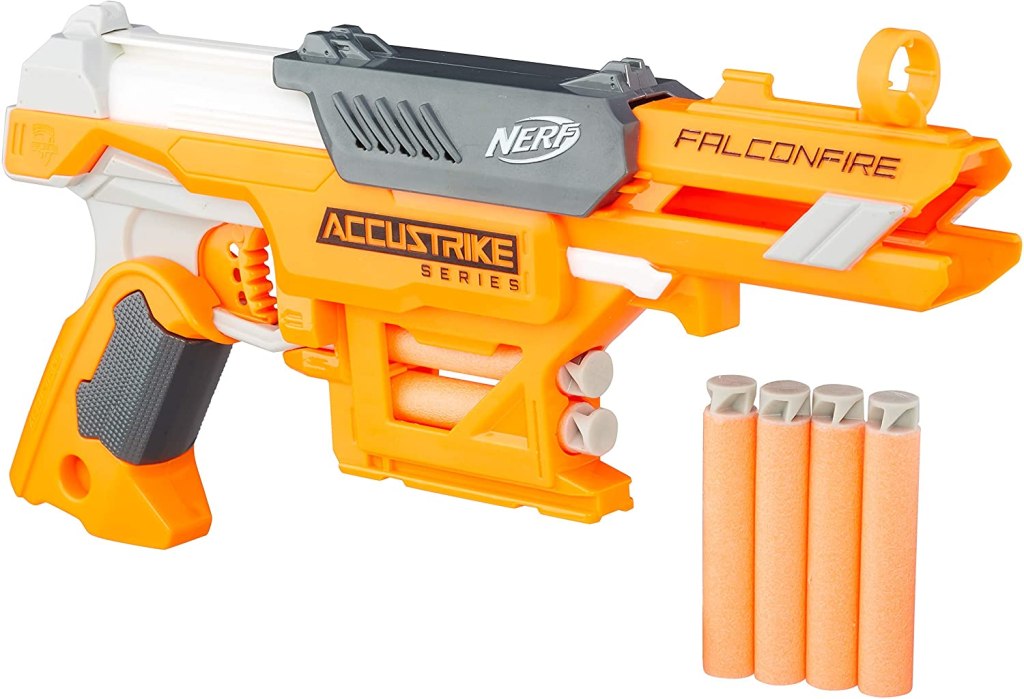 If you’re a straight shooter and want a straightforward pistol-style weapon to match, consider the Nerf Zombie Strike Hammershot Blaster. The blaster is also part of the Zombie Strike series, giving it an appearance to suit the zombie-attack vibe. It includes a hammer that needs cocking before firing and is ideal for hours of fun for kids eight and above. Additionally, the lightweight design is great for one-handed shooting, while the five-dart revolver and five Zombie Strike darts allow for fast and continuous manual firing. 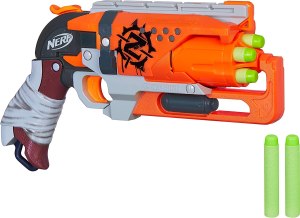 With the Megalodon Nerf N-Strike Mega Toy Blaster in your hands, it’s simple… crank and fire. This intimidating device sports a rotating, 20-dart drum, giving you plenty of firepower at your disposal without the limitation of a small-capacity dart cartridge. The blaster is supplied with 20 Nerf Mega Whistler darts which deliver precision hits up to 85 feet away. This impressive distance makes you the master of the battlefield. 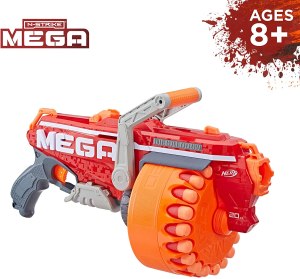 If you prefer to stay further away from the action and pick your foes off from afar, the Longstrike Nerf Modulus Toy Blaster should be your weapon of choice. It comes with 18 Official Nerf modulus Elite darts along with three six-dart clips to house them in. This three-clip setup allows you to quickly reload when the heat is on. You’ll also have a number of handy customizable elements, including the barrel extension, scope and bipod, which is great for providing stability during use. 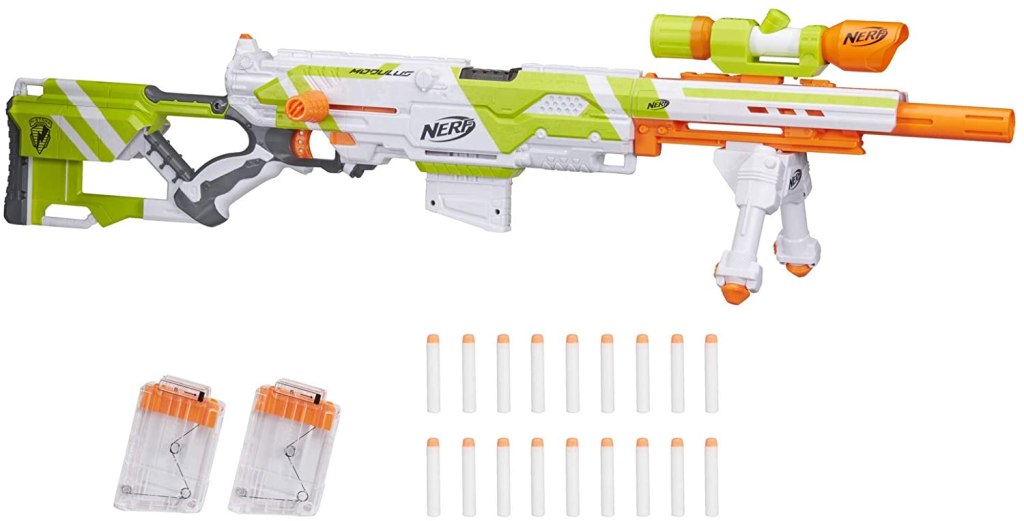 There aren’t many cooler ways to deal with your adversaries than with a Terminator-style shotgun. With the Nerf N-Strike Mega DoubleBreach Blaster in your hands, you’ll look the part and have the double-barreled firepower to match. The gun fires one of the six included mega whistler darts at a time up to a distance of 23 meters. The blaster also includes built-in storage for your additional shells, meaning they’re always on hand when you need them. 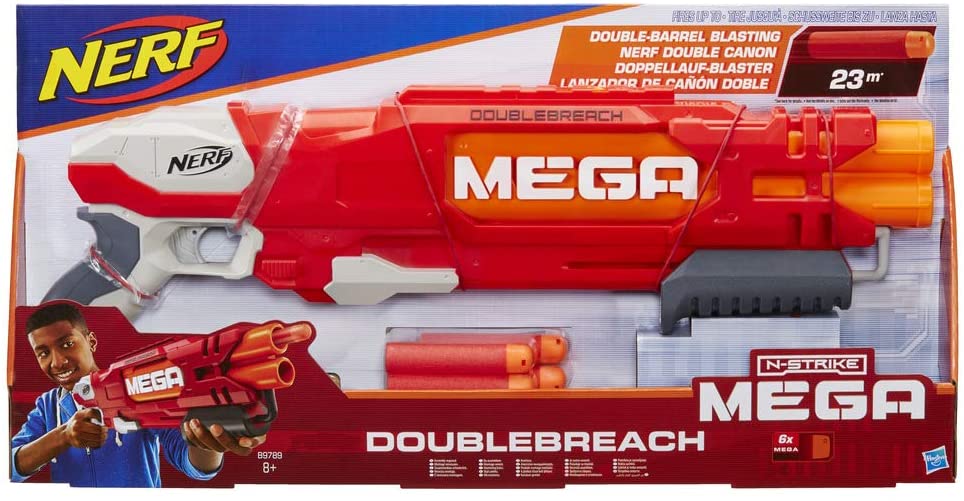 If you want to be the person in the room with the most rounds at the ready, you may want to consider investing in the Nerf Rival Nemesis MXVII-10K. This comprehensive weapon is fully motorized and includes a high-capacity hopper feed to let you fire at will. It’s a large-sized device that requires two hands to make the most of and comes with 100 high-impact rounds. This advanced Nerf gun is ideal for high-stakes and intense competitions and also comes in either red or blue, allowing you to assign teams through the color of the weapon.

The Nerf N-Strike Elite Rhino-Fire Blaster is the kind of weapon you would want at your disposal if aliens attack or you’re sent on some kind of Rambo-style rescue mission. The imposing design includes two large drums, each with a 25-dart capacity. It’s supplied with 50 elite darts, meaning your gun can sit at capacity at the start of any engagements. Additionally, you’ll have the option of carrying this large blaster in two hands or mounting it on the removable tripod which allows you to steady your shots and keep a free hand should you need it. 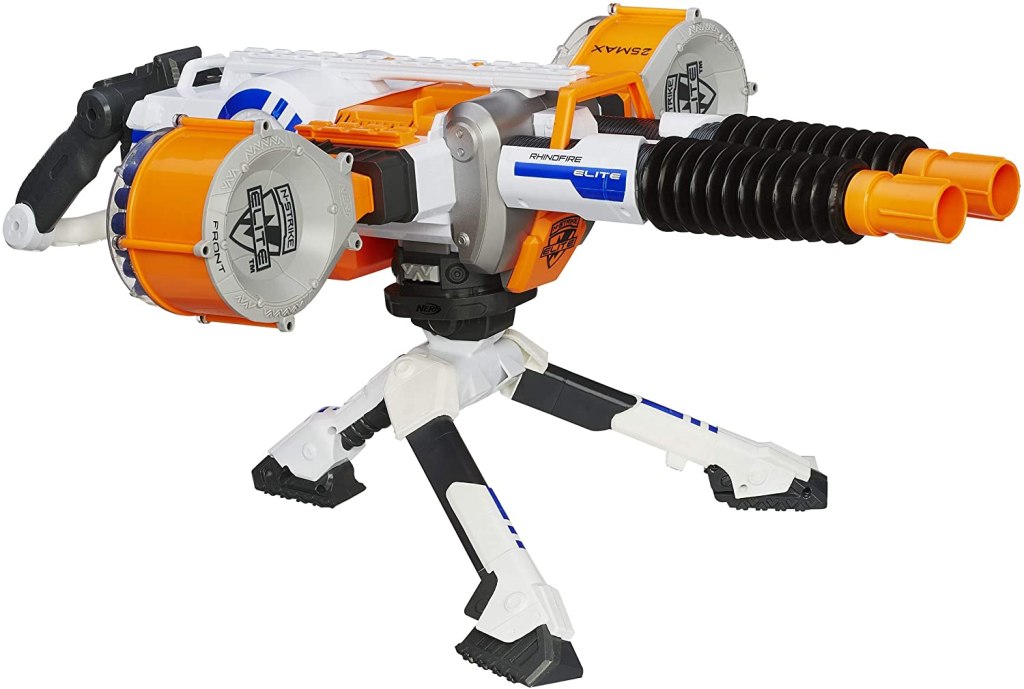 What’s better than having a Nerf gun in your hands and a scooter under your feet? The answer is easy — the Nerf Blaster Scooter Dual Trigger, a scooter with a Nerf gun mounted in the handlebars, allowing you to scoot and shoot as you go. The dual-barrel blaster comes with two six-dart clips and 12 darts. It’s capable of firing darts up to 40 feet using the simple trigger buttons. The sturdy, steel-frame scooter sports three wheels for added stability and can be adjusted to the height of the rider for a more comfortable ride. You’ll also find a step brake, comfortable rubber handlebars, numerous Nerf decals and an attractive blue and orange color scheme which means you’ll be hard to miss. 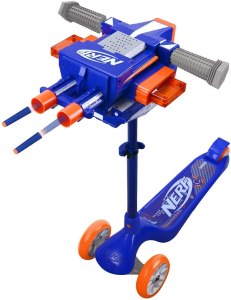 The Best Spider-Man Toys for Every Sort of Avenger