Summer is almost over, but that doesn’t mean the fun has to end. Our favorite thing to do: outdoor movie screenings.

Who doesn’t like sitting on a blanket, munching on some snacks, and watching a movie outdoors with your closest friends (and a couple hundred strangers)? Here are 11 nationwide outdoor movie series for when you just want to watch The Breakfast Club on an inflatable screen surrounded by food, friends and the open skies. 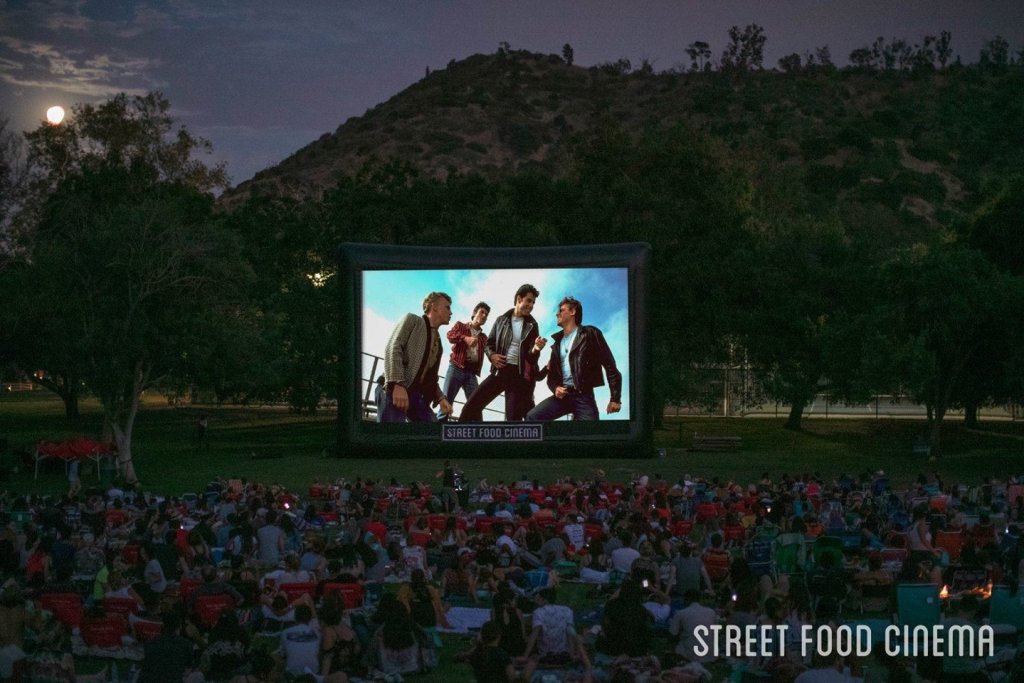 Despite only kicking off its debut season in 2012 at Expo Park in DTLA, Street Food Cinema has now emerged as the largest outdoor film series in Los Angeles, with over 50 events at 11 different locations in the area. With screenings also in San Diego and Phoenix, AZ, Street Food Cinema is known for bringing its moviegoers an experience they won’t forget as each event features gourmet food trucks, live music, game nights and even special Q&A’s with actors and filmmakers who worked on the films being screened. 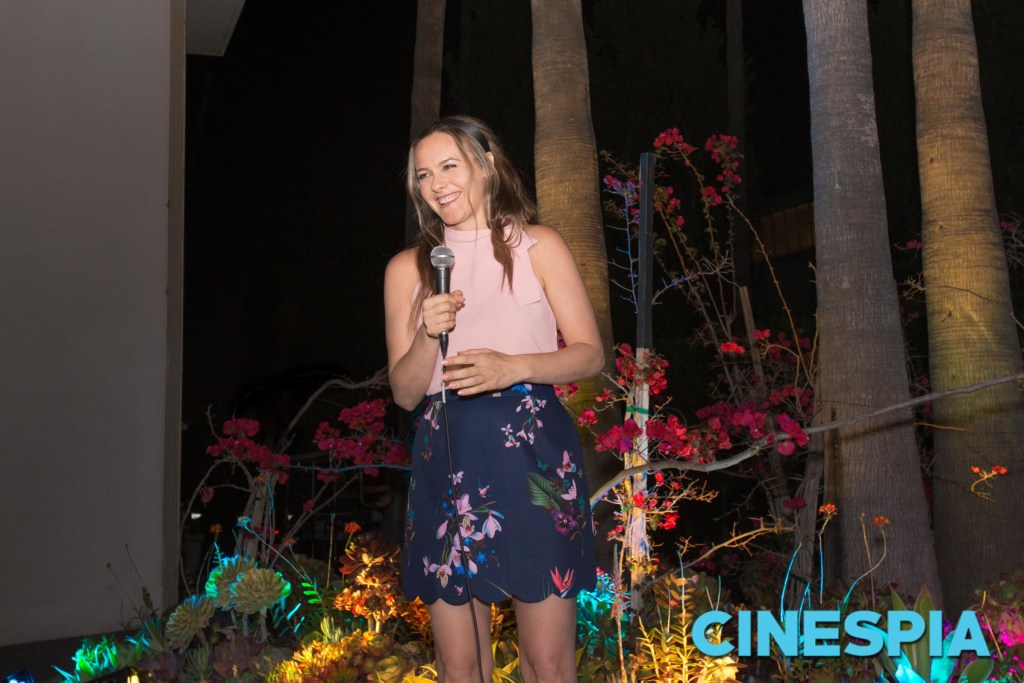 Ready for a walk among the tombstones? Especially those of Hollywood legends like Cecil B. DeMille and Douglas Fairbanks? As you walk onto the sprawling Douglas Fairbanks Lawn adjacent to the famed graveyard and mausoleums within Hollywood Forever Cemetery, expect to only see rows and rows of blankets and low-rise chairs filled with fans of that night’s flick. This summer, Cinespia hosted a sold-out, special screening of Clueless where Alicia Silverstone, the movie’s “clueless” heroine Cher, made an appearance and introduced the film that made audience members feel like they were “totally buggin’.” Guests are more than welcome to bring their own beer and wine in addition to snacks they can munch on while basking in the glow of North By Northwest or The Princess Bride . 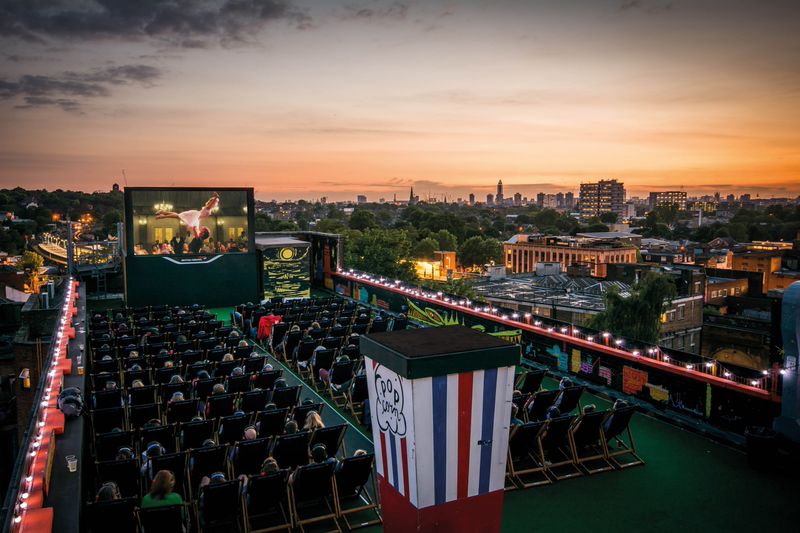 A popular series at home and abroad, The Rooftop Cinema Club holds “rooftop” events with spectacular views not only of Los Angeles’ skyline but also those within New York and London. The decision to become a “club” member is a simple choice, as each screening provides you with perks you might not ordinarily find at other outdoor screenings. Each guest receives his or her own wireless headphones so you never miss a beat. You are also treated to comfy deck chairs, so you don’t have to worry about cramming a lawn chair into your backseat. Featured films range from cult classics like The Big Lebowski to studio blockbusters like Raiders of the Lost Ark to fairly recent releases like Moonlight. 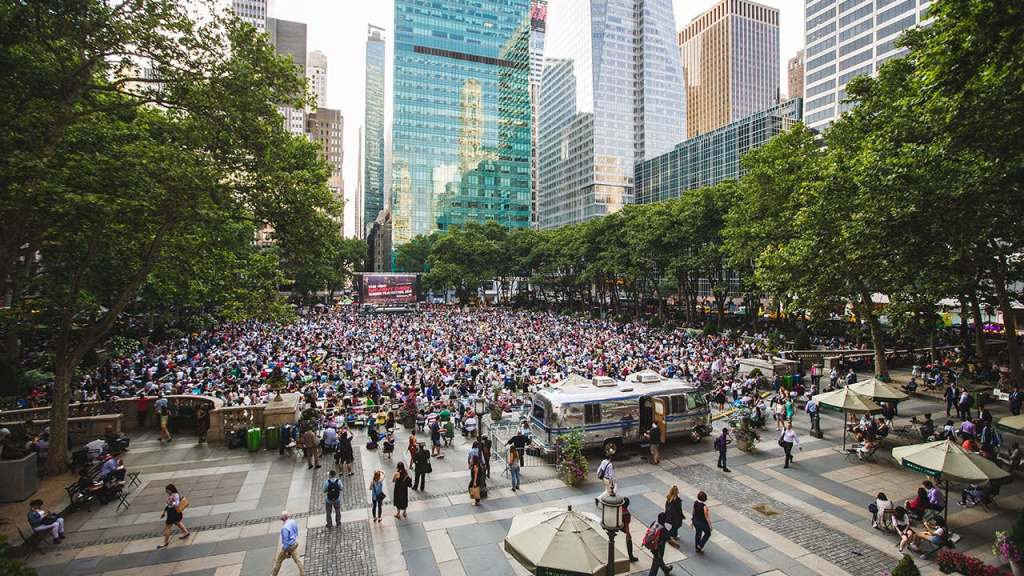 Bryant Park isn’t just for Fashion Week. Every June, the HBO Bryant Park Summer Film Festival holds court to filmgoers and aficionados of the customary “boogie dance” set to HBO’s 1983 theme alike. Each film begins at sunset around 8 or 9 p.m. and is introduced by a Warner Brothers cartoon. Food trucks also frequent the festival in case you forgot to pack yourself a picnic basket to nosh on while watching King Kong . Also, don’t let the buzzing noises of the city get you down. Captions are displayed for every feature film.

5. Flicks on Bricks at Pioneer Courthouse Square – Portland, OR 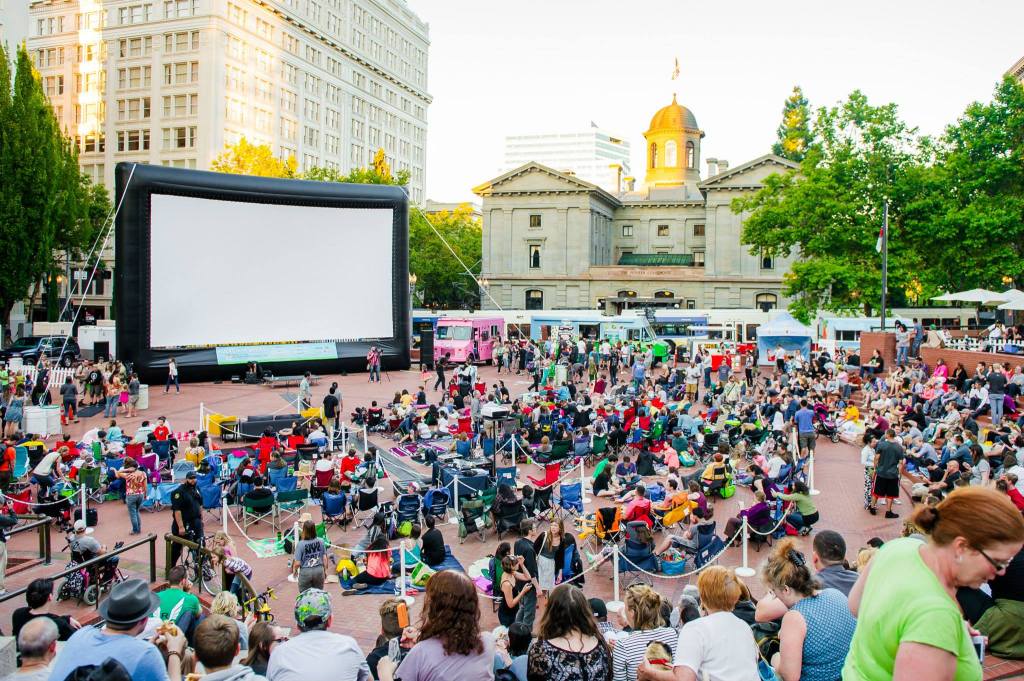 Image courtesy of Flicks on Bricks

Flicks on Bricks in Portland invites you to make Pioneer Courthouse Square your living room for five nights in the summer–for the exact same price as sitting at home on your couch (I.e. free). Who could resist that? Guests are welcome to bring their own food and to make comfortable seating arrangements (i.e., low-back chairs, pillows, cushions and even bean bags ) for each Friday evening screening running from July 21 through August 18 this year. Each movie is accompanied by live entertainment pre-show, too. 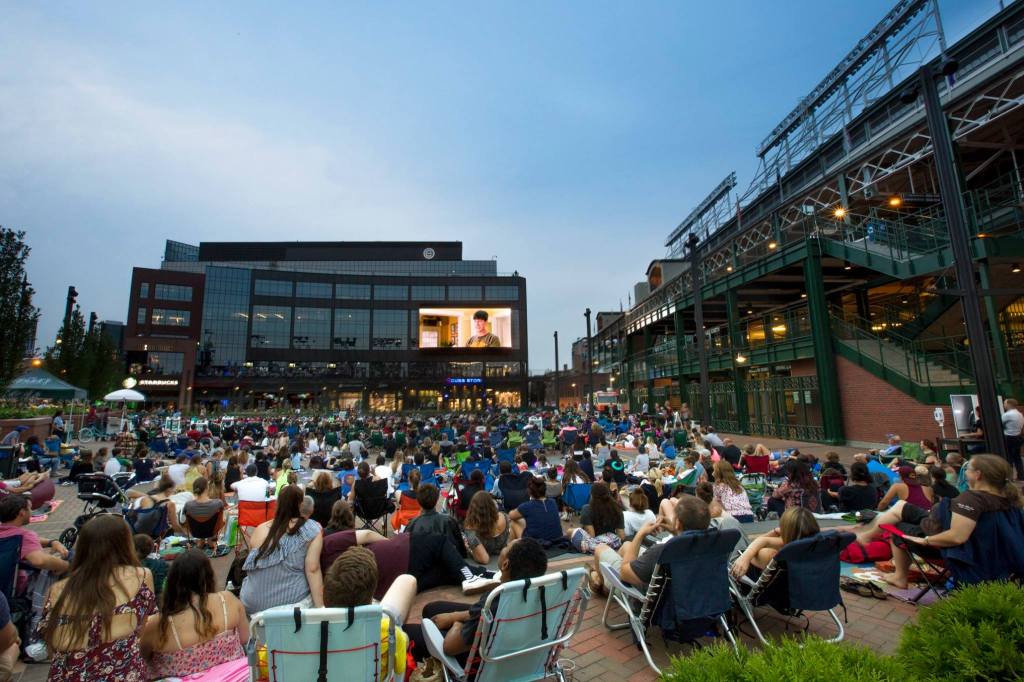 Image courtesy of The Park at Wrigley

This one’s for you, Chicago Cubs fans. Right next to the iconic stadium, the Park at Wrigley screens independent and classic films every other Wednesday night free of charge. Presented by Music Box Theatre, the summer movie series runs from June 14 to August 23 this year with music performances before the shows start at sunset. Films this year include the Chicago staple, Ferris Bueller’s Day Off .

7. Film on the Rocks at Red Rocks Ampitheatre – Denver, CO 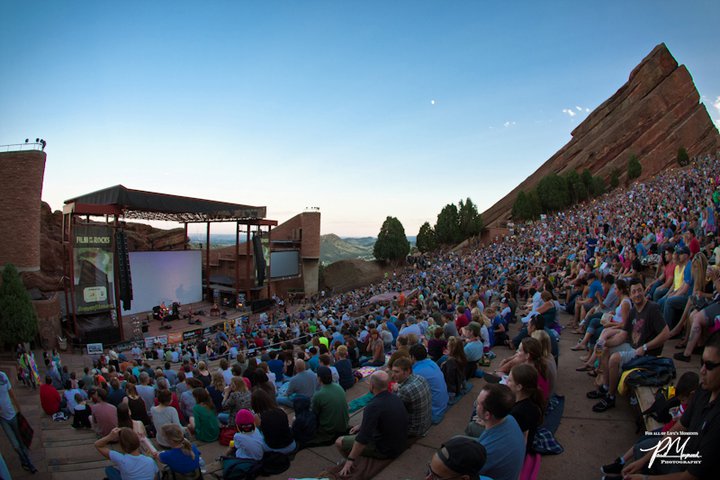 Image courtesy of Film on the Rocks

Drinks aren’t the only summer refreshment that can be on the rocks. In Denver, the Red Rocks Amphitheater is in the midst of its 18th season projecting films “on the rocks” with nine events this summer. Concerts and performances by local comedians kick off each evening, which was created as a collaborative effort between the Denver Film Society and the Denver Arts & Venues in order to provide an affordable opportunity for the community to enjoy films and live entertainment. The very first film to be screened in the program was Francis Ford Coppola’s The Godfather, while movies on this year’s roster include Bridesmaids and Rogue One: A Star Wars Story. 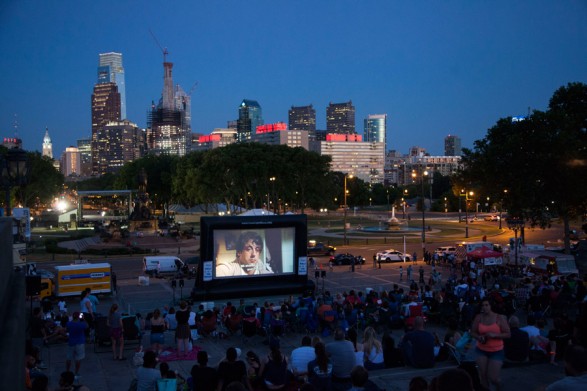 Image courtesy of Philly @ The Movies

Ever year, St. Christopher’s Hospital for Children presents their film series, “Philly @ The Movies” at landmark locations across the historic city. This year’s roster includes features that are fun for the whole family such as Despicable Me and The Lego Batman Movie . But the most exciting showing is the annual feature presentation of Rocky on the steps up to the Philadelphia Museum of Art that Sly Stallone made famous with his Oscar-winning film. 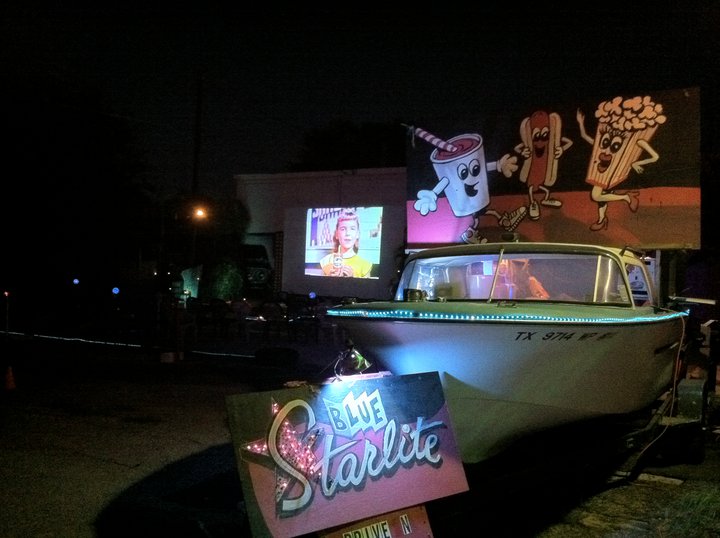 Want to have a 50s-style date night like Danny and Sandy in Grease where they and all their friends head to the local drive-in? Well, thanks to the Blue Starlite Drive-In in Austin, TX, your dream can become a reality. They only take 30-50 cars in per night, so make sure to reserve a spot well in advance. This summer’s lineup has a slew of Spielberg favorites, so make sure to check out double features like Jurassic Park and Jaws as well as E.T. and The Goonies . 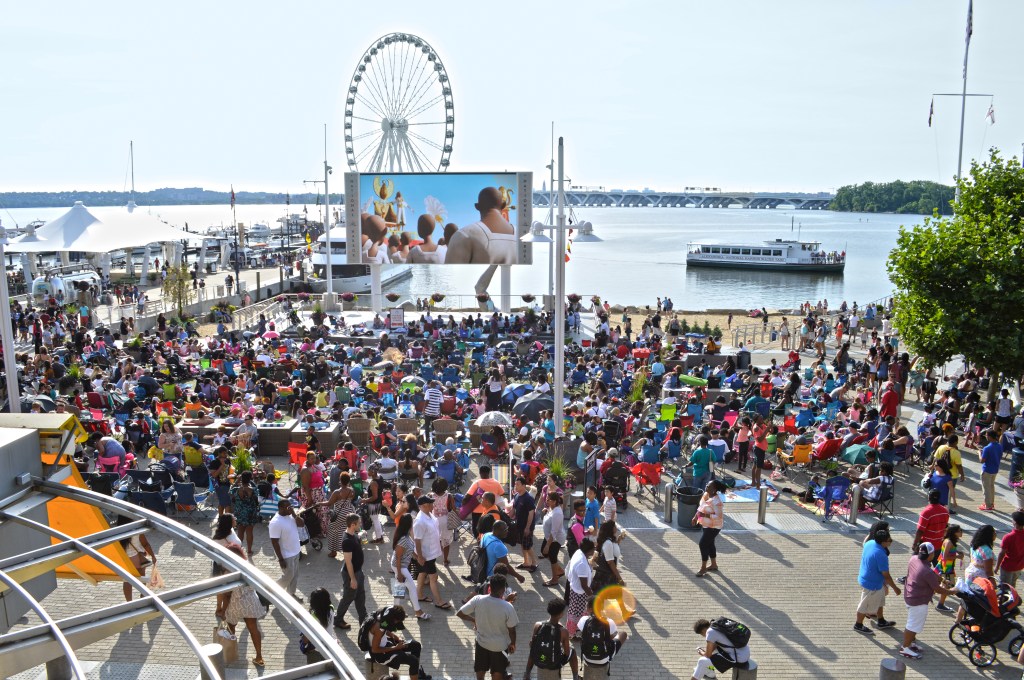 Image courtesy of National Harbor Movies on the Potomac

James Madison had a point when negotiating with Alexander Hamilton to move the nation’s capital to the Potomac–WHAT a backdrop for a movie night. Screenings are held on Thursdays every summer with date night-oriented films such as Hitch and Sleepless in Seattle. Each Sunday also hosts more family-friendly fare with Disney favorites like Moana and Mary Poppins . Don’t forget to buy tickets for double features, too, as a highlight this September is a Cinderella affair worthy of a grand ball sans the missing shoe as both the animated Disney feature and the Whitney Houston/Brandy masterpiece from the 90s will be shown. 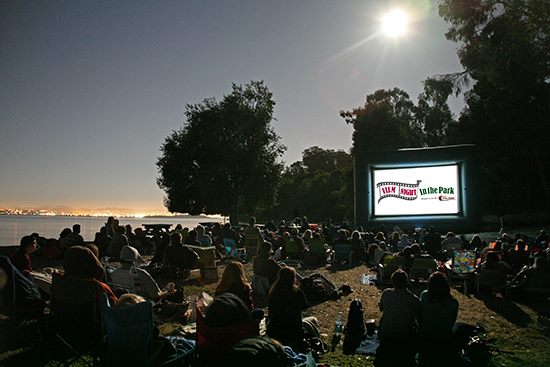 Image courtesy of Film Night in the Park

The premier outdoor movie series in SF, Film Night in the Park starts all their movies at dusk in local parks around the Bay Area including Washington Square Park and Union Square. Dolores Park is one of the most popular locales for this lineup presented by Monterey Bay Aquarium. Don’t worry if you haven’t had a chance to attend yet, as these events continue until the end of September with a closing presentation of what else, but The Breakfast Club .