Once the party starts fading, its time to bring out the big guns: hilarious, funny and sometimes raunchy card games. These party games promise nonstop laughter or groans and are made to bring out the best (and worst) in you while helping you get to know your friends and family just a little bit better.

These games are all played with cards, work great as ice breakers (in case the party gets stale) and are meant to be played all night long. One of the most popular games listed is Cards Against Humanity which is a great adults-only question and answer game where the goal is to pair the cards in the funniest, most provocative or cleverest way you can.

For the social media-savvy generation there is What Do You Meme, where you compete with your family and friends to create the funniest meme possible and an exploding kitten card game that is a highly strategic kitten-version of Russian roulette.

While some of these games may or may not cause offense to some, their goal is to bring everyone together for a never ending night of laughs.

1. WHAT DO YOU MEME? Party Game

What Do You Meme? is a card party game for the social media generation. The goal is to be crowned meme queen or king by competing against your friends to create the funniest meme. This is done by pairing Caption Cards with a Photo Card during play while a rotating judge picks the best combination each round. The judge decides the funniest pairing and whoever played the winning Caption Card wins the round. The game comes with 435 cards, an easel and bonus rules in a shrink-wrapped, custom box.

Pros: Eight expansion packs (sold separately) are available for this game so you never run out of memes.

Cons: This game is for adults 17+ and if you are easily offended, another option might be better. 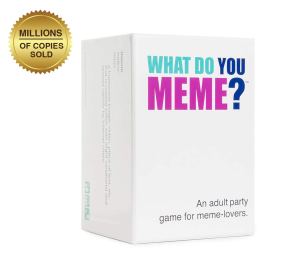 WHAT DO YOU MEME? Party Game

Cards Against Humanity is a classic card party game that never gets old. The game is simple — each round one player asks a question from a Black Card and everyone else answers with their funniest White Card. The goal is to pair the answer and question cards in the funniest, most provocative or clever way you can. The game contains 500 white cards, 100 black cards, game rules and even alternate rule options so the game can essentially keep you playing for hours on end.

Pros: There are enough cards to ensure little to no downtime during play.

Cons: It is recommended to play with four players or more to keep the game interesting and fun. 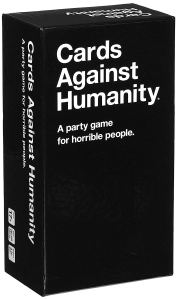 The Exploding Kittens Card Game is a highly-strategic, kitty-powered version of Russian roulette. The game works by taking turns drawing cards until you draw an Exploding Kitten card, which is when you explode and are out of the game. You can avoid exploding if you play a Defuse Card which distracts the kittens with things like laser pointers, kitten yoga or catnip sandwiches. The game comes with 56 cards, is family-friendly and needs 2-5 players for best results.

Pros: This game is the most-backed, crowd-funded Kickstarter project ever.

Cons: Some reviews mention the production quality of the cards is low leading to easy wear and tear. 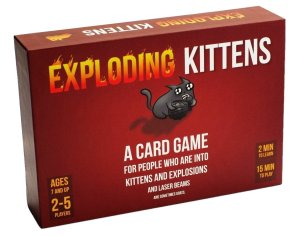