No, you are never too old to play with LEGOs.

And for people who aren’t afraid to call themselves nerds, the best Star Wars LEGO sets never get old.

One of the most popular kids’ toys of the past 30 years, LEGOs have a number of benefits for children, including motor skills development and enhanced creativity and concentration. But LEGOs have an age-agnostic appeal, especially for adults who spend all day glued to laptops. If you could really use a tactile, screen-free outlet to reduce stress and harness creativity, then we highly recommend these Star Wars LEGO sets for adults. After all, analog pastimes such as vinyl records, coloring books, cassettes and film cameras have made a steady comeback, and surely this is society’s answer to digital fatigue.

And like with LEGOs, you can never really outgrow Star Wars toys. Both may have been a childhood obsession  — speaking from personal experience here, as someone who sunk hours into both LEGOs and Star Wars films, and went the Jedi costume route on Halloween more than once — but the Star Wars canon never stops evolving. With a constant stream of new films, spinoffs and multimedia installments arriving practically every year, Star Wars is here to stay.

LEGOs have kept up with Star Wars, too. Many of the best Star Wars LEGO sets come from the more recent Star Wars installments, though ships and characters from the original trilogy are readily available too. And when they go on sale, it’s a must-browse event.

When shopping for Star Wars LEGOs, the main question to consider is this: How much time and money are you willing to spend? You can snag $20 Star Wars LEGO sets with under 300 pieces, or splurge on $200, 1,000-piece sets that’ll take some time to assemble. For true collectors, there are even massive 7,000+ piece Star Wars LEGO sets, although these sets are for true master builders only.

The choice is yours, young Padawan. May the Force be with you.

Is there a more recognizable Star Wars ship? Doubt it. We should first and foremost note, however, that this is not the original Millennium Falcon LEGO set, which costs $799 and is very hard to find. We reviewed that particular set in our guide to the best LEGO sets for adults, but because it’s so hard to find, we’ve stuck with the contemporary version here.

This building kit is modeled after the latest Star Wars trilogy, and thus sadly does not feature Han Solo, the legendary Falcon captain, in action figure form. And while that original Millennium Falcon LEGO set included a whopping 7,500 pieces, this one comes with a more manageable 1,351 pieces, a much friendlier price tag and some great Star Wars characters, new and old.

Darth Vader might be the most iconic villain, not just in the Star Wars universe, but ever. His menacing physical presence, spine-chilling breaths and booming bass voice (delivered by the legendary James Earl Jones) mirror the evil that precedes his reputation. What better persona to feature on your shelf? The 834-piece completed model measures about 8 inches tall and 5.5 inches by 5.5 inches at the base, making it the perfect display size. We highly recommend keeping this in view during Zoom calls, to ensure your coworkers know you mean business.

This is one of our favorite new LEGO sets. This diorama depicts one of the most memorable scenes in A New Hope was when our heroes found themselves in a trash compactor on the Death Star, hoping against hope that R2-D2 could stop the walls from closing in time to prevent them from being smushed. As a movie scene, it was a classic, and now as an 802-piece diorama, it can become a classic piece of memorabilia for Star Wars and LEGO lovers alike (and of course among the significant crossover between the two. This is a great early Black Friday deal too, and it’s currently 20% off at Walmart.

You can already hear John Williams’ classic Cantina Band song buzzing in your head. First introduced in Star Wars: A New Hope (the first film), Mos Eisley is a spaceport town, with its Cantina serving as a watering hole for many smugglers and thieves. Basically, it’s the grittiest dive bar you’ve ever been to. The Cantina has some unfortunately discriminatory policies — they don’t serve droids or allow them in the building — but it’s the setting for our introduction to Han Solo and Chewbacca. This 3,187-piece LEGO set is sprawling and dynamic, with 21 different figurines (including the trio of aliens performing the aforementioned Cantina Band song) and a retractable roof to watch your favorite Cantina scenes play out.

For serious Star Wars fans and master LEGO builders only. This massive, 4,784 piece LEGO set is a behemoth, with the completed ship reaching almost four feet long and more than two feet wide. It truly embodies the scale of the actual Star Destroyer, which fans will know absolutely dwarfs the Millennium Falcon in size. The LEGO kit also includes a display stand, informational plaque and two imperial figurines.

The iconic Red Five helmet worn by Luke Skywalker as he destroyed the first Death Star in A New Hope is now a gorgeous 675-piece LEGO model complete with stand and nameplate for proud displaying options. Models like this make you marvel at the accuracy and attention to detail of the more intricate members of the LEGO Star Wars line, and while this set is tagged “for adults,” we’ve seen some young teens who can build circles around anybody when it comes to LEGO. 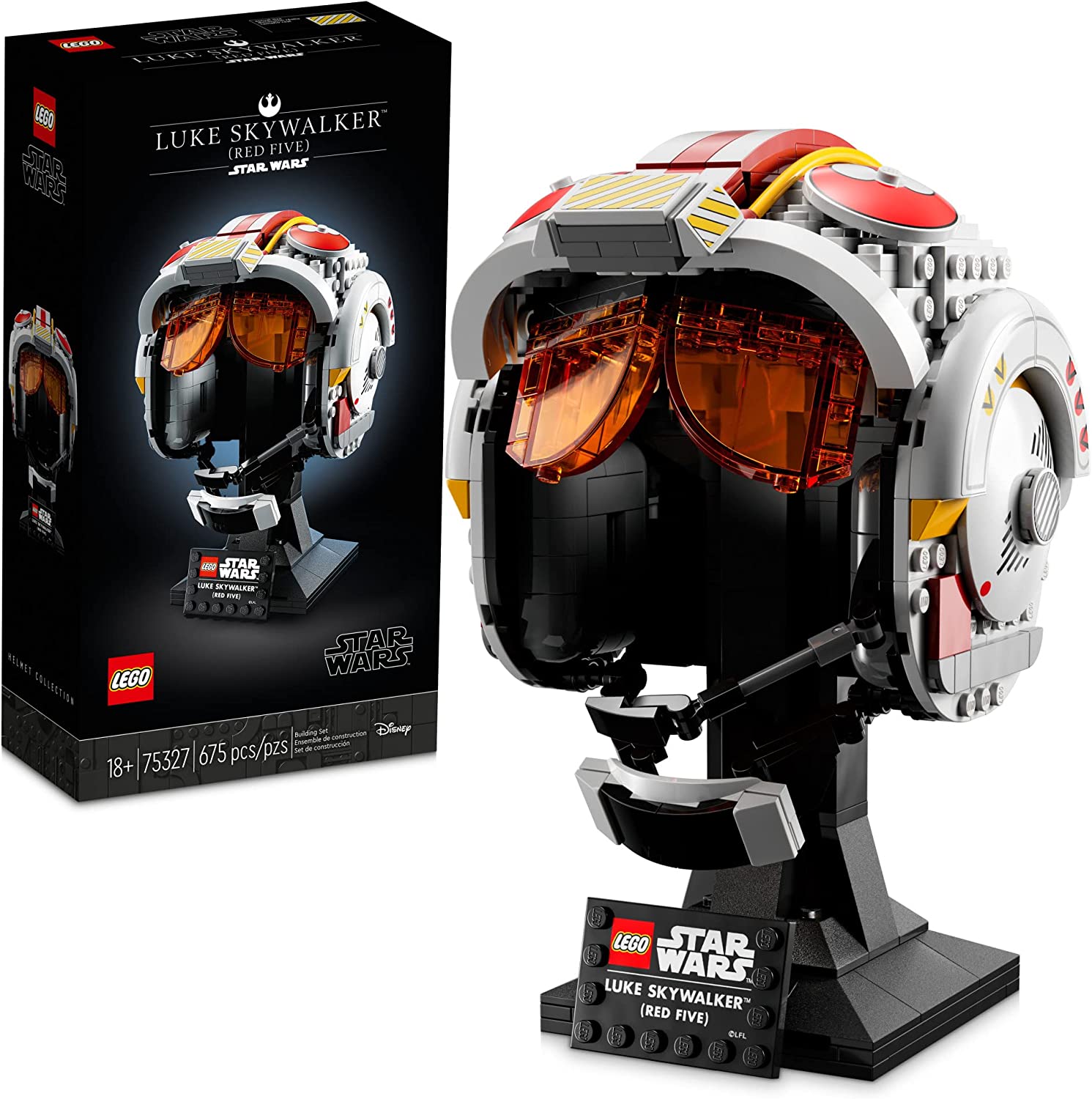 Build it, you must. 1,771 pieces, it has. Pardon the Yoda speak, we’re just getting into the Star Wars spirit. A legendary Jedi master, Yoda’s wisdom and power belie his 2-foot size. He’s a sage figure in Star Wars, the embodiment of good, so we suggest pairing him with the Darth Vader helmet above to ensure you’re representing both sides of The Force.

Here’s a great holiday option for the little padawans in your house. The 2022 LEGO Star Wars Advent Calendar has a cool buildable mini-figure behind all 24 doors as the kids count down to Christmas, including C-3PO and R2-D2 in festive (ugly) Christmas sweaters, Darth Vader in vacation attire, and other fun surprises. It’s 20% off on Amazon right now, and unlike many of the bigger LEGO Star Wars sets, it’s good for kids 6 and up.

OG Star Wars fans associate the X-Wing fighter with Luke Skywalker and R2-D2, but in the final trilogy of the saga it was the swashbuckling Poe Dameron and his adorable droid sidekick BB-8 manning the iconic battle craft of the Resistance. This is a great starter set for younger fans as they discover the LEGO Star Wars universe: It’s only 60 pieces, so it’s easy for the 4+ crowd.

Luke’s time on Dagobah undergoing Jedi training with Yoda is one of the best and most memorable parts of The Empire Strikes Back, and it’s all here in this awesome 1,000-piece diorama. Everything from Yoda’s primitive swamp hut to the wing of Luke’s X-Wing sticking out of the murky water is here, and the plaque captures Yoda’s ultimate words of wisdom: “Do. Or do not. There is no try.”

Aside from its cultural impact and sheer scale, the most impressive thing about Star Wars might be its longevity. What started as one film in 1977 has evolved into an entire universe and multimedia franchise, with more films, books, theme parks and television series. One of the latest installments — the Emmy-nominated The Mandalorian TV series on Disney+ — proves that this isn’t longevity for longevity’s sake: Star Wars continues to churn out legitimate, quality installments that fans and critics both love. This Razor Crest ship featured in The Mandalorian features two actual spring-loaded shooters, along with a handful of familiar figurines, including the beloved Baby Yoda.

The Empire Strikes Back, which premiered in 1980, is widely considered not only the strongest film in the Star Wars canon but also one of the greatest sequels of all time. Its first act takes place on the remote planet of Hoth, and features and epic snowy battle between the Empire and Rebels. The Battle of Hoth marks the first appearance of the Empire’s AT-AT (All Terrain Armored Transport), the massive, 72-foot combat vehicle with blast-proof armor. This LEGO version is only a foot tall, but features spring loader shooters, foldout panels and a cockpit with room for three LEGO figures. You can also employ the LEGO-sized Luke Skywalker to take down the AT-AT, which he famously does in the Battle of Hoth.

Speaking of Luke Skywalker, his popular X-Wing ship is also available in LEGO form. At only 474 pieces, this one has a pretty manageable assembly process, with the completed LEGO ship a foot long and 11 inches wide. The figurine set features Luke himself — complete with his lightsaber and decked out in his orange flying suit — Princess Leia, General Dodonna, and, of course, Luke’s trusted X-Wing droid companion: R2-D2.

Not everyone has the time or patience to sift through thousands of LEGO pieces. For a more affordable and simpler assembly process, we recommend this BrickHeadz LEGO pair, featuring The Mandalorian’s titular character and The Child (aka Grogu, but colloquially known to us as Baby Yoda). It’s only $20 and just under 300 pieces, so you’ll have these built in no time.

LEGO BrickHeadz The Mandalorian & The Child

Though the most recent Star Wars sequel trilogy sputtered to a somewhat disappointing final installment (2019’s The Rise of Skywalker), the trilogy as a whole brought an exciting new energy to the already legendary Star Wars saga. It also gave us a fresh cast of characters, including Adam Driver’s Kylo Ren, whose shuttle is pretty badass. You can snag the LEGO version which comprises just over 1,000 pieces and boasts a pretty impressive size — 19 inches wide with the wings extended.

You can never have too much Darth Vader, and this is one of the best Star Wars LEGO sets for people who love all things Annakin Skywalker. Though it’s featured sparingly in the major film installments, Darth Vader’s castle on the volcanic planet of Mustafar makes its first appearance in 2016’s Rogue One: A Star Wars Story. And as far as evil lairs go, it’s pretty darn epic. Fans will appreciate the level of detail here, right down to Vader’s meditative bacta tank. The set features 1,060 pieces, six figurines and a classic TIE fighter starship.

Alright, let’s make it known up front: This LEGO Death Star costs over $1,500. So yeah, if you’re not a Star Wars superfan, this is most definitely not the set for you. Consider the Death Star — a humungous space station with a planet-destroying laser — the truest symbol of the evil Empire. It’s on par with the Millennium Falcon when it comes to iconic Star Wars memorabilia, and plays a major role in the original Star Wars trilogy. The LEGO version sports an inordinate amount of detail, with characters and locations that’ll be instantly recognizable to Star Wars fans. It features an impressive cast of more than 20 LEGO good and evil figurines as well, with multiple versions of Luke Skywalker plucked from different moments in the film trilogy. The level of specificity here is impressive, which might just validate that price tag.

These Are the Star Wars Toys You’ve Been Looking For

We\'ve updated this shopping guide to include newly released Star Wars LEGO sets ahead of the holiday shopping season. Pricing has also been updated throughout.