Bob Iger has been Disney’s CEO for almost 15 years, and the company has reached impressive new heights during his reign atop the House of Mouse. During Iger’s tenure, Disney acquired Marvel, Pixar, LucasFilm and 21st Century Fox, and the company’s value has multiplied nearly five times under his leadership. Needless to say, he’s made a name for himself as one of the most effective business leaders of our time.

Iger compiled the lessons he’s learned from leading Disney into his #1 New York Times Bestselling book The Ride of a Lifetime: Lessons Learned from 15 Years as CEO of the Walt Disney Company, which you can purchase on Amazon.

Iger started in 2005 at a difficult moment for Disney. The company was struggling against its competition, theme parks were struggling and streaming technology was progressing faster than anybody could keep up with. Now, Disney+ is taking over the streaming market and the company has the rights to some of the biggest franchises in the world.

Iger’s book came out in 2019, the same year Iger was named TIME Magazine’s 2019 Business Person of the Year. In his memoir, he recounts lessons learned while running Disney and its 200,000 employees and shares his leadership philosophies. 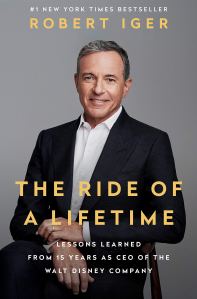 His core leadership beliefs include optimism, courage, decisiveness and fairness. He describes how he applied each of these in a variety of circumstances while leading Disney and why each of them was so critical to his success.

He notes that the “ideas in this book strike me as universal,’ Iger writes. ‘Not just to the aspiring CEOs of the world, but to anyone wanting to feel less fearful, more confidently themselves, as they navigate their professional and even personal lives.”

You can pick up a copy of Bob Iger’s memoir below and hopefully apply some of his wisdom to your own life.

<em>The Ride of a Lifetime (Kindle)</em>