Bocce ball, oddly enough, seems to be particularly hot right now. The growth of bocce ball has been happening over the past few years, but it’s hardly a new game. Its origins can be traced to Ancient Egypt, and it got picked up by the Greeks and then Romans. It’s been carried on since then in Italy for many years. While the specific reasons bocce is popular now in America aren’t easy to explain, at least the rules of the game are.

Bocce is played in two teams. The first team throws a small ball called the pallino, and then the teams take turns throwing larger balls toward the pallino. The team who gets the closest scores. The game can be played one-on-one, or in teams of up to four players.

Whether or not the popularity of bocce is going to wane doesn’t matter because it’s fun to play. The game has endured for this long because it’s easy to learn, easy to play for all age groups and it can suit small or large groups. Even if you don’t have a bocce ball court near you, you can still play on the beach or in a backyard. If you’re using traditional, hard bocce balls, it’s best to play on softer surfaces like dirt, short grass, and sand.

If you’ve never played bocce ball, you’re a few thousand years late. But that’s okay, because it’s never too late to get in on this classic game. These are some of the best bocce ball sets on Amazon. Each set includes 8 full-sized balls, one pallino, and a carrying tote.

For a unique bocce ball experience, this set has battery-powered lights in each ball. That makes it easier and more entertaining to play at night. Included are 8 regulation size balls and a pallino. There’s also a tape measure for settling difficult calls, and it all comes in a zippered tote. The tote has two handles, a main compartment, and an external accessory pocket.

Pros: Lighted balls for nighttime play. Comes with a tape measure and a carrying tote. 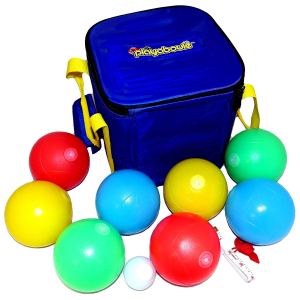 For a classic pick, these bocce balls are made from a poly-resin. That gives them a weighty feeling in the hand akin to traditional wooden balls. The balls come in a stylish canvas tote with two carrying handles. Included is a measuring rope for easily settling difficult calls. For playing indoors or on hard surfaces, a rubber set is also available from the same listing. 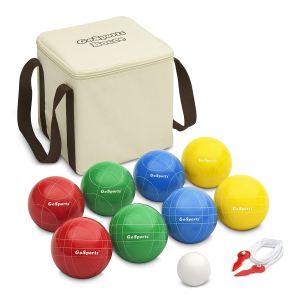 This set comes with 4 red and 4 green balls, making it easy to keep track of the which balls belong to which team during gameplay. There’s also a roll of measuring tape and a white pallino. The set comes in a black canvas carrying bag. Both regulation 100mm balls and smaller 90mm balls are available.

Cons: Balls are not the most durable. 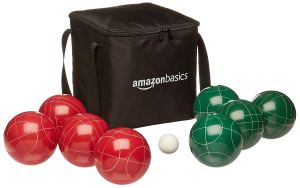