There are many celebrities that became famous at a young age, and then there’s Britney Spears. Since her debut in the early 90s, Spears has become one of the most internationally-known and beloved pop stars of all time. She’s also been one of the most ruthlessly scrutinized celebrities in the media, and her private life has been carefully guarded in recent years.

Framing Britney Spears, the brand new documentary that explores the rise and fall of Britney Spears, is out now on Hulu. The documentary takes us from her adolescent rise to fame to her controversial present-day circumstances. Currently, Spears is under a legal conservatorship led by her father, and you may have seen her legion of adoring fans advocating for the courts to #FreeBritney.

The new documentary special was produced by the New York Times and is available to watch on Hulu for free via a 7-day trial for new subscribers. If you already have a Hulu account, then you can stream the documentary on Hulu now. (You can also watch on FX if you’ve got a cable package.) As a long-time Britney fan who loves belting out her tracks on a karaoke night, I wasted no time in streaming Framing Britney Spears. I found it fascinating and heart-breaking at the same time.

She was making millions at the age when most of us have just learned to drive, and at a time when paparazzi obsession and celebrity culture was at an all-time high. In the late 90s and early Aughts, the fandom around Spears and other young female celebs was peaking. Social media didn’t exist yet, so all the inside “scoops” came from tabloids. Needless to say, they ripped her apart, and her famous 2008 downward spiral resulted in a conservatorship being established where her father, Jamie Spears, was granted full control of her life by the courts. As in FULL control — he had agency over her home, what she ate, how much money she spent, who she spent time with and more. This legal bind has in recent years sparked outrage amongst fans and the #FreeBritney movement has produced a surge in conspiracy theories about everything from the cancellation of her Las Vegas residency to her Instagram captions. 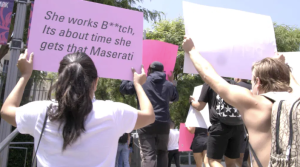 While very little is known about Britney’s personal life today, there’s a lot to be said and speculated about when it comes to what she wants, what she’s capable of doing and what she has earned after years of being under a microscope. The documentary explores all of this while being careful to not step over the line in terms of putting words in Spears’ mouth or desires in her possession.

There’s plenty of archival footage of male reporters harassing her about her body and sexuality, and shocking remnants of the press she faced that under today’s standards would’ve been cancelled long before she was pushed to the edge. The movie, along with many other things, is a condemnation of that treatment and a revelatory work that shows just how brutal being a young, female celebrity would’ve been at that time (and still is today).

Framing Britney Spears also explores a side of Spears that very few people have seen — a strong-minded, business-savvy woman who’s very much in control of her destiny. It was dispiriting to meet that person only now, after years of being fed a doctored perception of who she really is.

There’s plenty that can be guessed about what Britney wants, how she feels about her father and where her fortune should go. However, the other main thesis statement of this work? Is how much information about Spears the public has been denied access to — including, potentially, her true thoughts and feelings. One of the most mind-blowing sections of the movie talks about potential coded messages she’s been leaving for fans on her Instagram page. It was compelling — but it left me with this mystified and deeply disturbing sense of awe at how transparent her life was and how arm-guarded it’s become.

Here’s a person whose whole life was on display and now everything she shares is edited, snipped and approved by a team of her handlers. How bizarre is that? I’m all for things like medical records and her custody status with ex-husband Kevin Federline being private, but she should be able to speak freely. This touches on the final aspect of the film I found weighty and worthy of action — how misguided the establishment of the conservatorship was. A conservatorship is a legal action taken when someone is very old and has a condition like Alzheimer’s that disables them from taking care of themselves. The reason why it’s so difficult to get out of a conservatorship once it’s established? Because most of the time, the person whose life is being controlled passes away.

All of this to say, at the end of this well-done excavation of all things modern day Spears, I found myself firmly planted in the stance that we should #FreeBritney and let her share exactly what she wants for the rest of her days. You can watch the whole documentary on Hulu with a 7-day free trial if you’re new to the service here, you can also watch it on FX if you have a cable package.

Get Ready for Some Feels With These Incredible Poetry Books