Dunder Mifflin, this is Pam. There’s been a murder at the office and it’s up to you, the employees of Dunder Mifflin, to find the culprit. Sure, we could leave the task to man of mystery Michael Scott, but when you want something done right, well, you know what they say.

This awesome edition of Clue comes with six Dunder Mifflin employee tokens, features nine different locations from the show and includes nine different “weapons” from various episodes (nunchucks, anyone?) Our favorite is the iconic World’s Best Boss Mug. But aside from these fun and tiny details, what makes this version of Clue stand out from the competition is just how genius it is: The board game itself mimics The Office’s, well, office to a tee, and each individual token, game piece and card conjure up all kinds of wonderful memories from your favorite episodes.

When you play Clue: The Office edition, it’s up to you to discover who killed Tobey Flenderson. 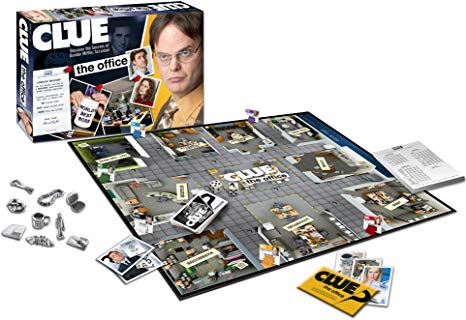 CLUE: THE OFFICE EDITION BOARD GAME

If you love board games, The Office edition of Clue is easily one of the best games you can ask for. The tokens are hilarious, the characters iconic and the whole scenario smells like something Michael Scott would cook up in that crazy head of his as some kind of team-building exercise.

And if that wasn’t enough, it comes with rumor cards, a hilarious deck of personality cards and more easter eggs for fans of the hit NBC show. The custom game board perfectly recreates the look of the show, and the new Intrigue & clock cards help add a fun twist on an age-old classic.

Unlike other branded games, you can instantly tell this one was crafted with a lot of love. For devoted fans like yours truly, it features enough fun tidbits to help you reminisce about one of the greatest sitcoms ever made. But it also features enough gameplay value for players who aren’t particularly big fans, or worse, those who’ve never watched a single episode (gasp!). Yes, it’s that perfectly executed. Have we convinced you yet?

This limited edition Clue won’t be available forever, so order yours fast.

CLUE: THE OFFICE EDITION BOARD GAME