They may not be the catwalks of Paris, but come October 31st, the streets of America come alive with their very own fashion show. Competition in the Halloween costume game is fierce, especially when it comes to Halloween costumes for families, and that means you need to be on the top of your stuff to fight for the “best in the neighborhood” prize. If you’re part of a family or group of friends and are really looking to up your game this year, it’s time to embrace the group costume.

The advantages of a group costume are numerous. By adding extra characters to a costume idea, you can turn a tortoise into the tortoise and the hare, change a standalone pig into your favorite children’s story, or give your lovely Captain America the backup he needs by forming the galaxy’s greatest band of defenders.

Another idea to make your family Halloween costume idea stand out from the crowd is to utilize costumes for kids and costumes for pets. As many celebrities have already demonstrated, adding a baby’s cuteness into the equation can be the difference between a mediocre attempt and one that the neighbors can’t help but swoon over.

We’ve put together a list of our favorite Halloween costume ideas for families. From choices for family units with babies to others with a focus on teens, no matter who you’ve got in your party this Halloween, we’ve got a family Halloween costume ensemble to ensure your group looks great.

Cute one, your child. For a family Halloween costume that will never go out of style even in a galaxy far, far away, let every family member pick their favorite Star Wars character. From Rey to Obi-Wan, the child to The Mandalorian, the Star Wars universe has something for every member of the family. Or just tell them they have to pick a costume or no candy. This is the way. 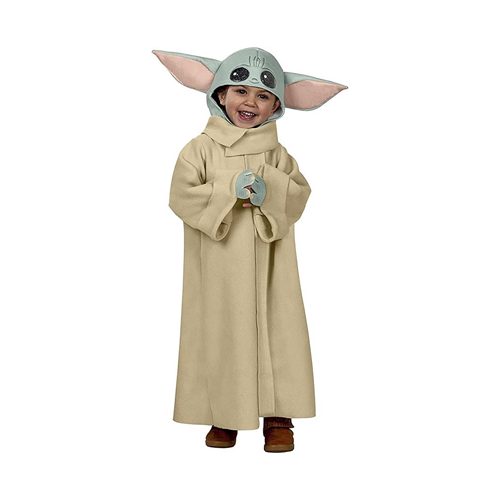 Despite their relationship being a little rocky, Kim Kardashian and Kanye West seem to still be very close. It makes total sense, given the fact that they share four young children. Mimic this entire West family by dressing in this Kanye West mask and spandex suit — not much different than the one Kim wore at this year’s Met Gala. Bring the brood along, dressing them in neutral comfy clothing and you can even bring a face hood to channel some of Yeezy’s most recent looks. 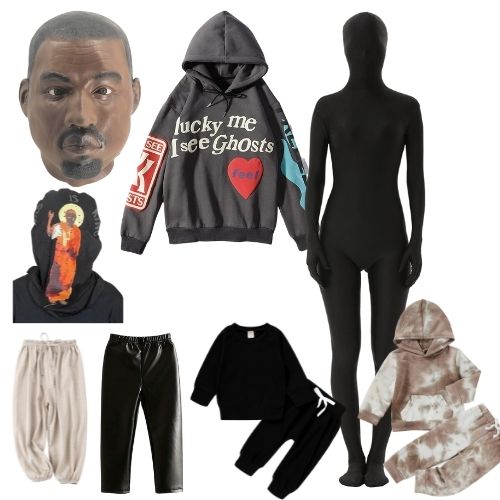 3. Cruella and Her Dalmatians

Does it sometimes feel like you have 101 kids? Easily keep track of them while trick or treating on Halloween with a matching family costume that has gone to the dogs. Parents and kids can dress up like dalmatians while one family member gets to be evil and misunderstood Cruella De Vil. 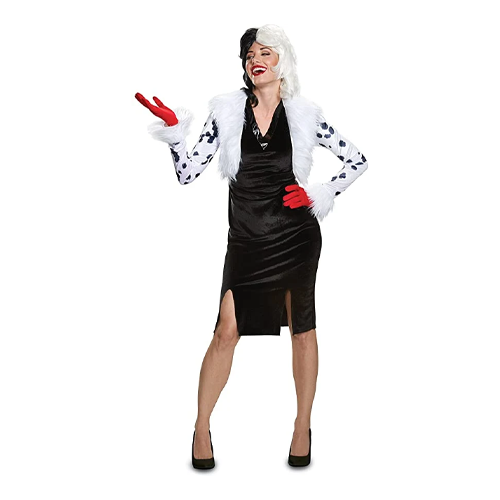 Did you know a Paw Patrol movie came out this year? You did if you have little kids and allow screentime (no judgment, we’re right there with you on the double). Dress up as Rebel, Chase, Sky and the rest of the gang on Halloween, and be ready to save the day! Or, just save some candy. 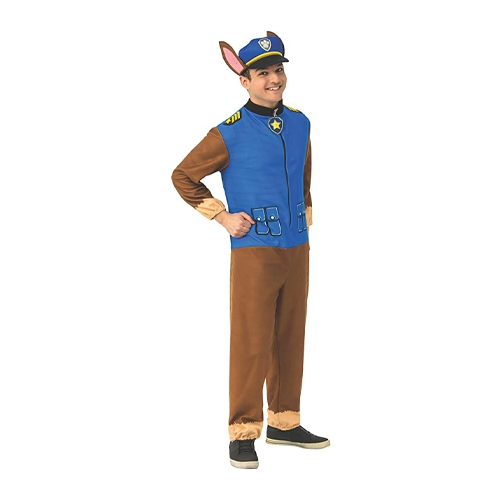 FOR THE SUPERHERO FAMILY

If your family was partial to Zack Snyder’s Justice League cut, pay homage to Wonder Woman, Batman, The Flash, Aquaman, Superman and Cyborg with a group Halloween costume that lets everyone be super. There are several options for each character in both kid and adult sizes, which means less fighting over who gets to be which superhero. Or more fighting. Maybe hold off on the candy until everyone agrees on a costume. 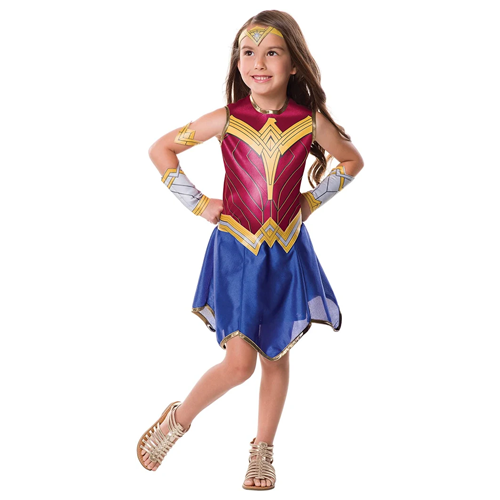 FOR THE ATHLETIC FAMILY

Want a Halloween costume that is comfortable enough to wear post-October 31 but isn’t a pair of onesie pajamas? Then add yourself to the Tune Squad roster. In honor of the 2021 release of Space Jam: A New Legacy, your family can dress up like Bugs, Lola, Tweety and the rest of the team. 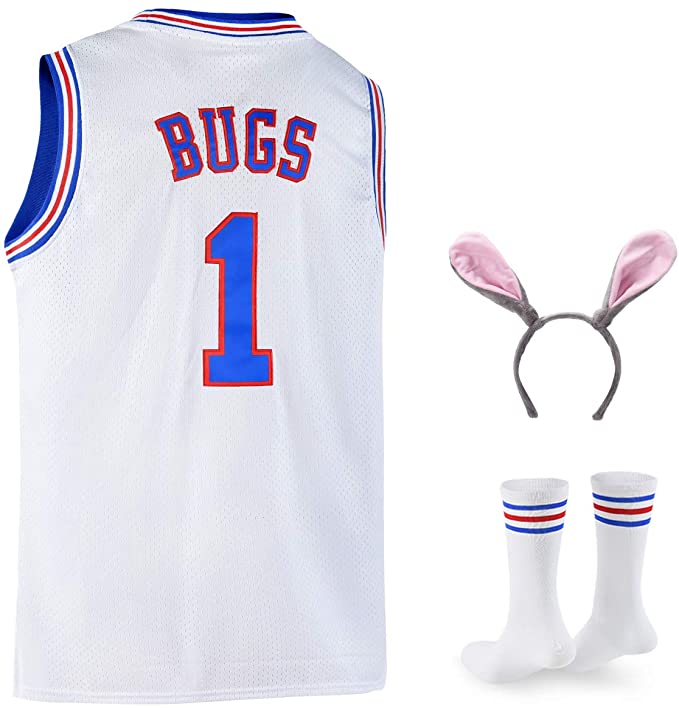 Oh, the reactions you’ll get with this Ashton Kutcher, Mila Kunis and family get-up. Given their recent revelation about their less than frequent bathing schedule, it’ll be easier than ever to morph into this famous family for your family Halloween costume. It’s actually quite simple to pul-off. Grab a basic piece, like this denim jacket or a gray t-shirt, get the kids dressed, and apply some dirt effects to get the full look. 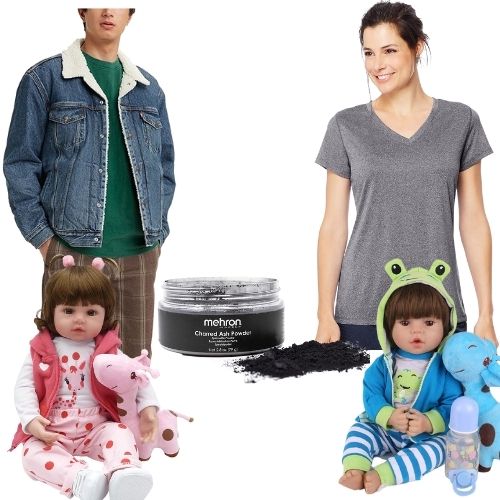 Would any of us have made it through 2020 and 2021 without mail carriers and delivery people? Dress your family like real heroes this Halloween and use a box for collecting candy. Then give some candy to your delivery people because they deserve it. Even four-legged family members can get in on this fun and functional costume (a mailbag is excellent for carrying snacks). 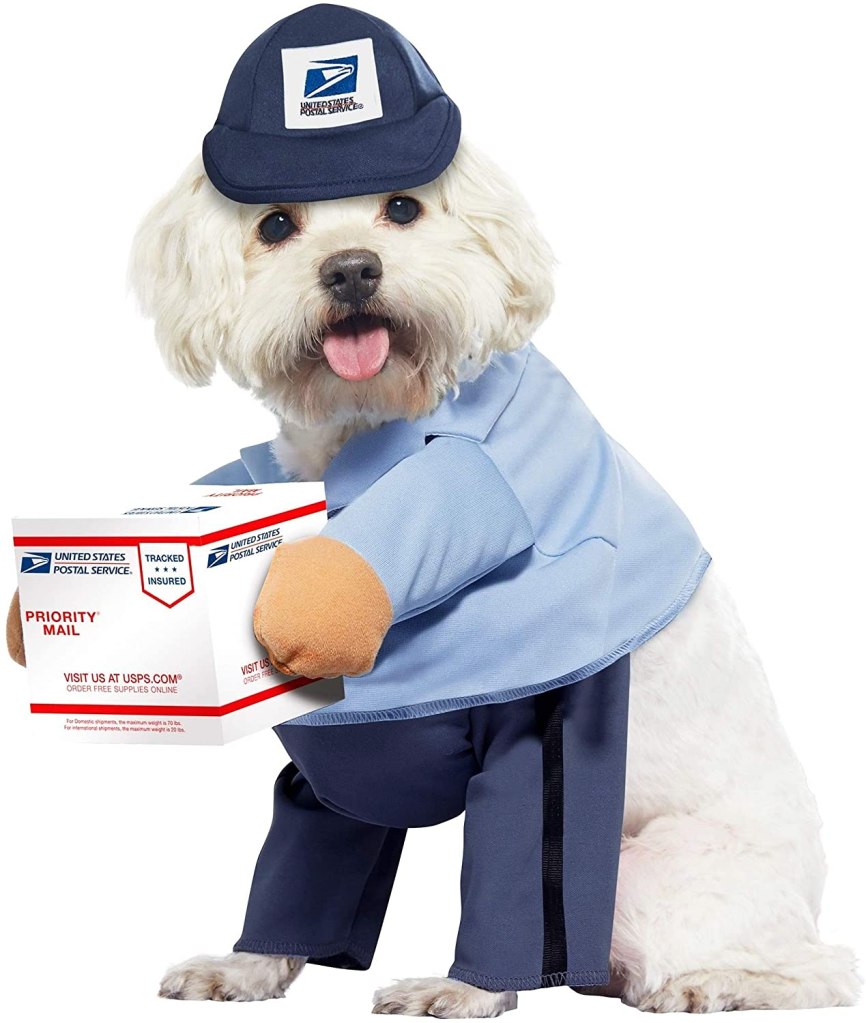 Dress as one of America’s favorite TV families, the Addams Family. Grab these family Halloween costumes to morph into Morticia and Gomez while dressing the children as Wednesday and Pugsley to make the look complete. 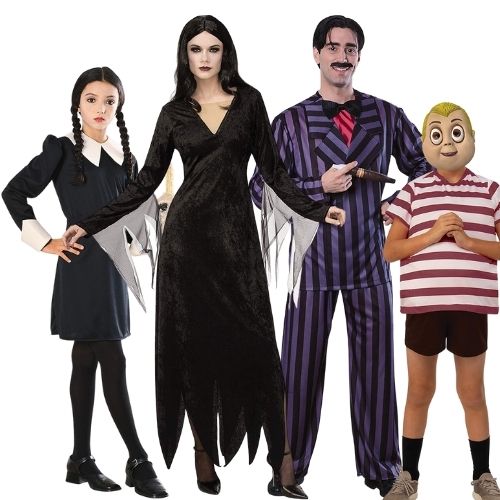 Good news! A new Ghostbusters film is coming out in 2021, and at the rate the franchise is going, there will probably be another new spooky film in a few years. That means this is a family costume that is both a throwback and totally relevant. Nailed it. 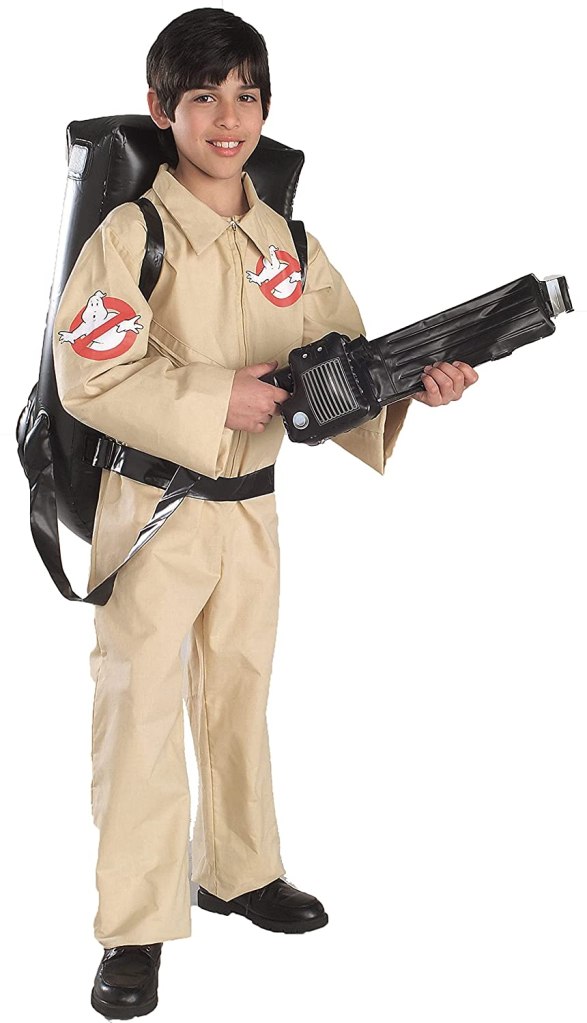 As kids get older, they may no longer think it’s cool to have a matching family costume. Ugh, teens, amirite? If you still want to sprinkle some holiday magic on your Halloween celebration this year, opt for a family costume that won’t cause your kids to die of embarrassment. We don’t think that’s an actual cause of death, but our teens are very adamant that it can happen. 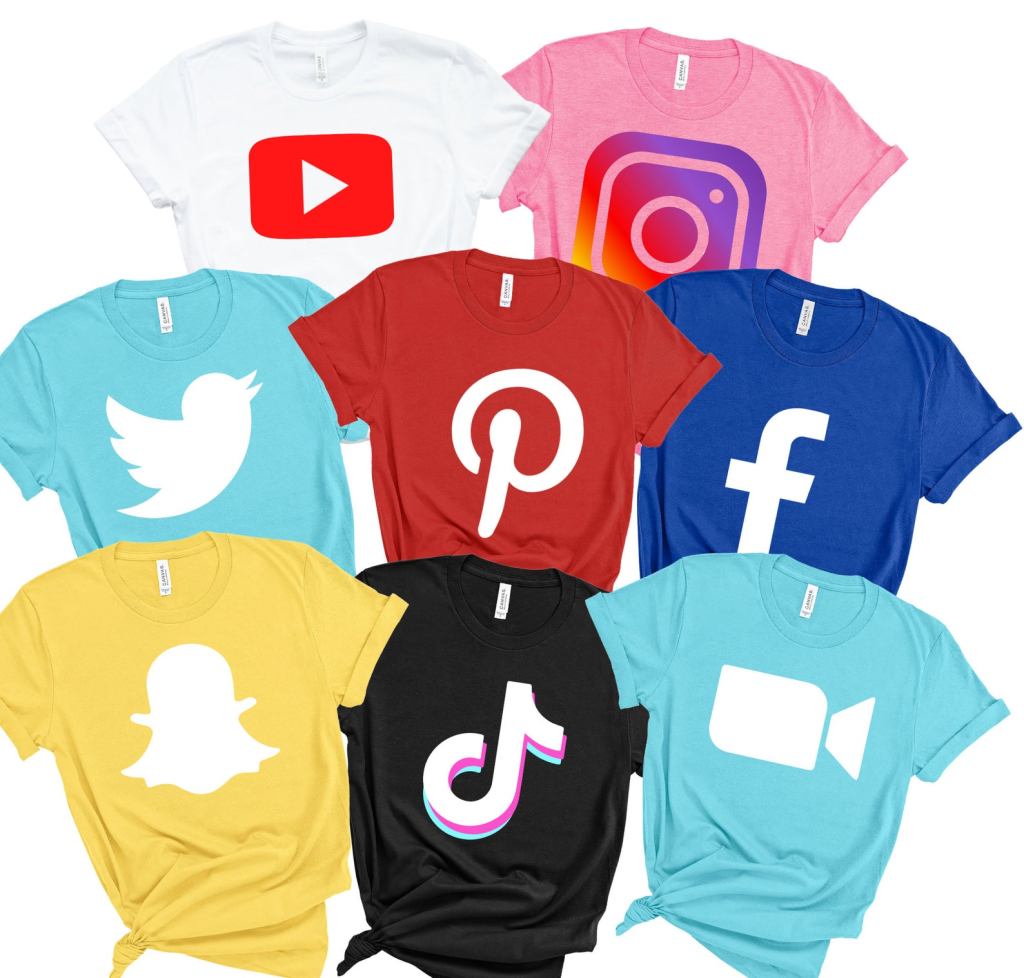 You can fight the continued popularity of Baby Shark, or you can just give in and embrace the doo-doo-doo. These Baby Shark costumes have something for the whole fish family and even come with a sound chip … yay. We mean, yay! 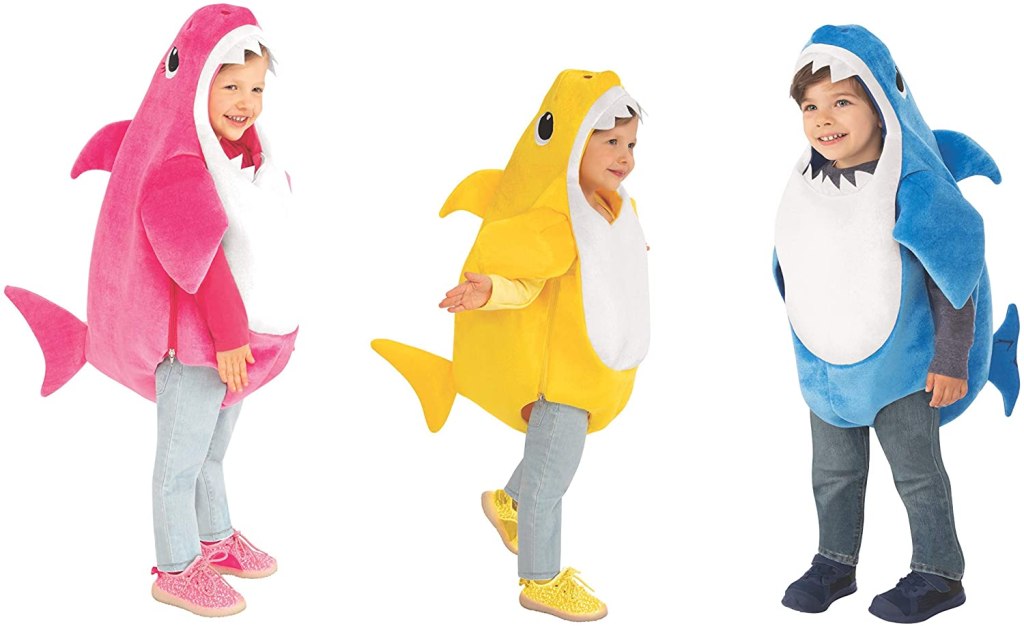 How cute is this?! Get the whole family together for a bee-themed Halloween costume. Mom or dad can be the “beekeeper,” while all the kids can be buzzy bees. These costumes are available in various sizes, from baby to adult, and will undoubtedly put a smile on your neighbors’ faces. 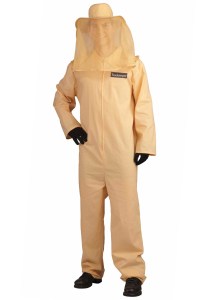 This fun and easy group costume set is an excellent option for teens to celebrate Halloween. Modeled after the game rock, paper, scissors, there are three costumes in each order. Wear this trio around the neighborhood or party to wow family and friends. 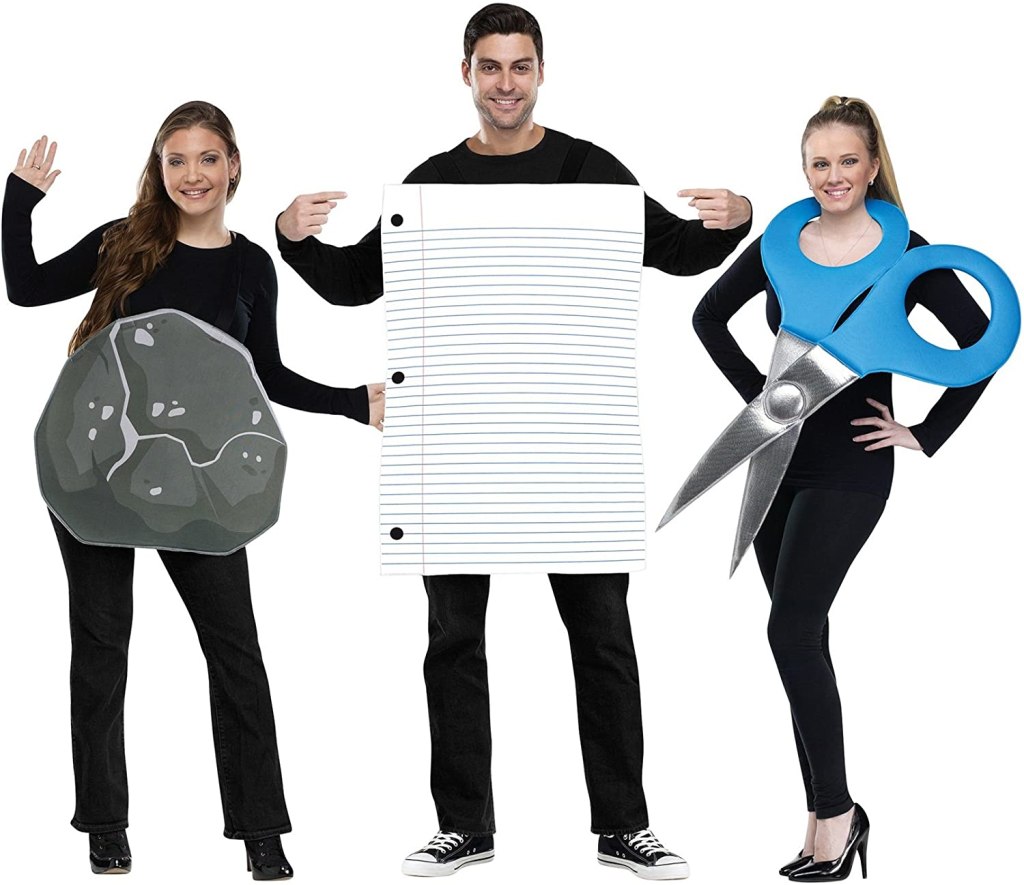 Since its original release, Frozen has been the basis for the ultimate costume for hundreds of thousands of little girls and boys. This Halloween, one-up the competition by dressing the entire family as Frozen characters. Choose from Olaf, Anna, Elsa or Kristoff. 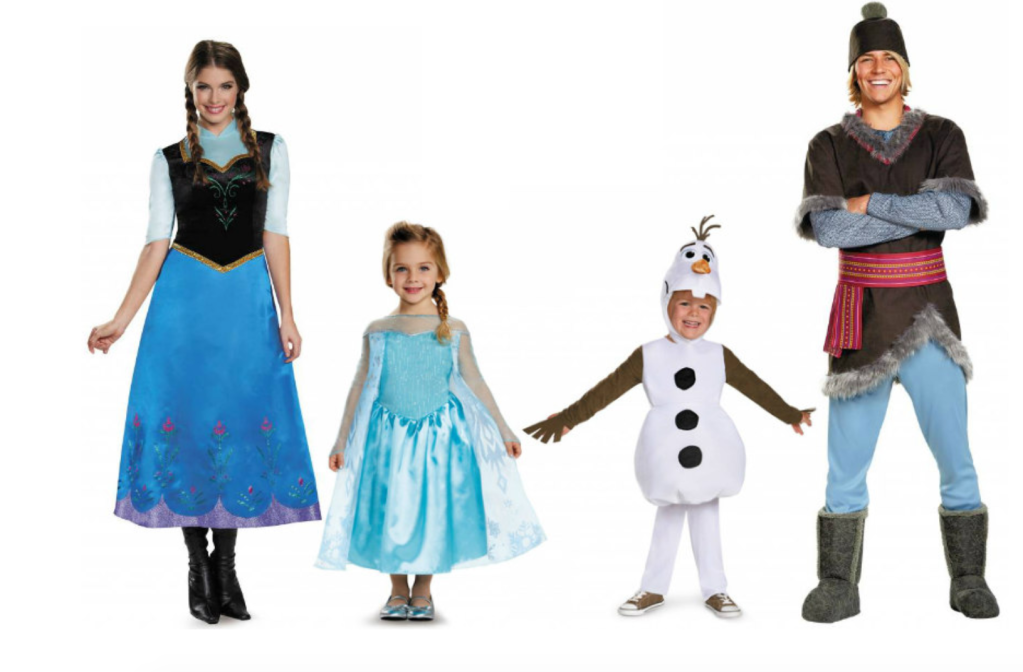 BEST FOR A FAMILY OF 3

Turn your neighborhood into Bedrock with these Flintstones family Halloween costumes. Suit up as Fred, Wilma and Pebbles Flinstone as you head out for a night or trick or treating or partying. These costumes are easy to wear and pair over clothing for a warmer feel. 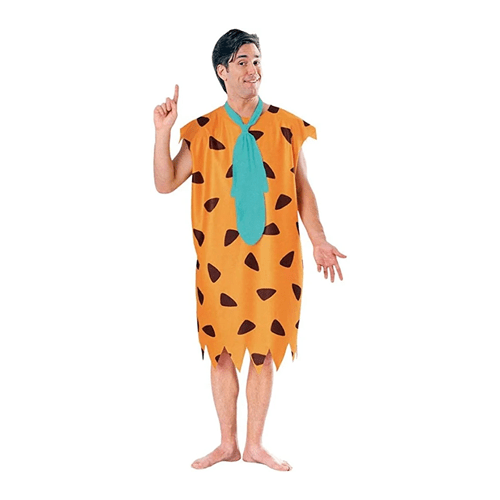 Dress as Prince Charming and allow your children to take center stage as the Disney princess of their dreams. This 17-piece trunk comes full of tops, skirts, headbands, and a pair of shoes, wand, tiara, necklace, and more to allow your kiddies to explore and create looks all their own. 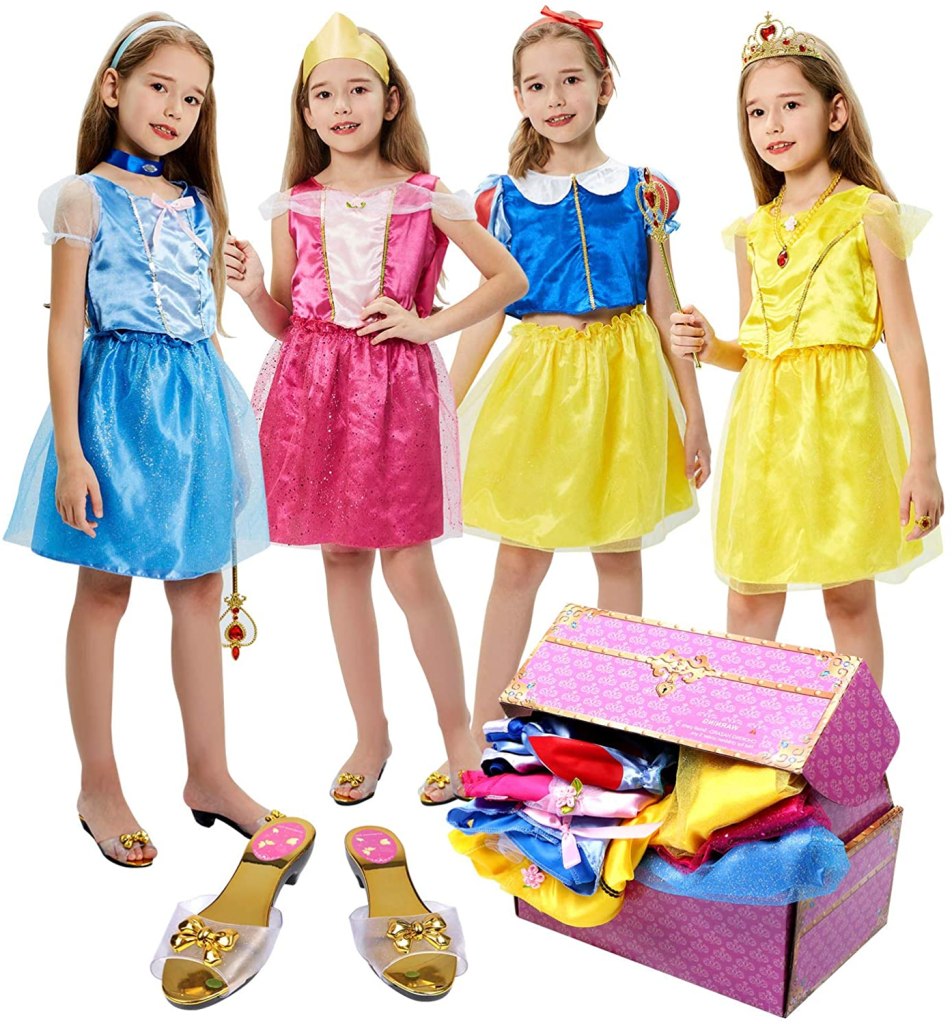 If you’re searching for an easy costume for the whole family, look no further than these red and white striped get-ups. You and your family can reenact the ever-popular Where’s Waldo? books with these outfits. The children’s and men’s versions of the costume include a shirt, a pair of glasses, and a hat. The women’s version has the same three items plus a pair of long, red-striped socks. 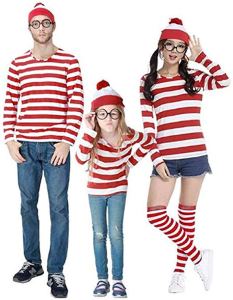 Whether it’s your baby’s first Halloween or you need something super simple at the last minute, you can’t beat this condiment set from TStars. The pack includes one yellow mustard t-shirt, one red ketchup t-shirt and one green relish onesie. Pair the T-shirts with jeans, and you’ll have an adorable and complete matching family costume for Halloween. Alternatively, dive a little further into the theme and make bottle top hats to jazz up the ensemble. 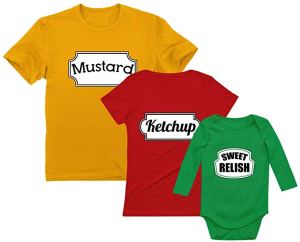 Regardless of your favorite character, you and your family are guaranteed a great time and plenty of admiration dressed like the kids from Stranger Things. Character options in the set include Eleven, Dustin and Steve. And, if you do want to get the adults involved, why not buy a Jim Hopper or Joyce Byers outfit. Or, for really putting a chill down everyone’s spine, have the adult jump out of a bush dressed as the Demogorgon. 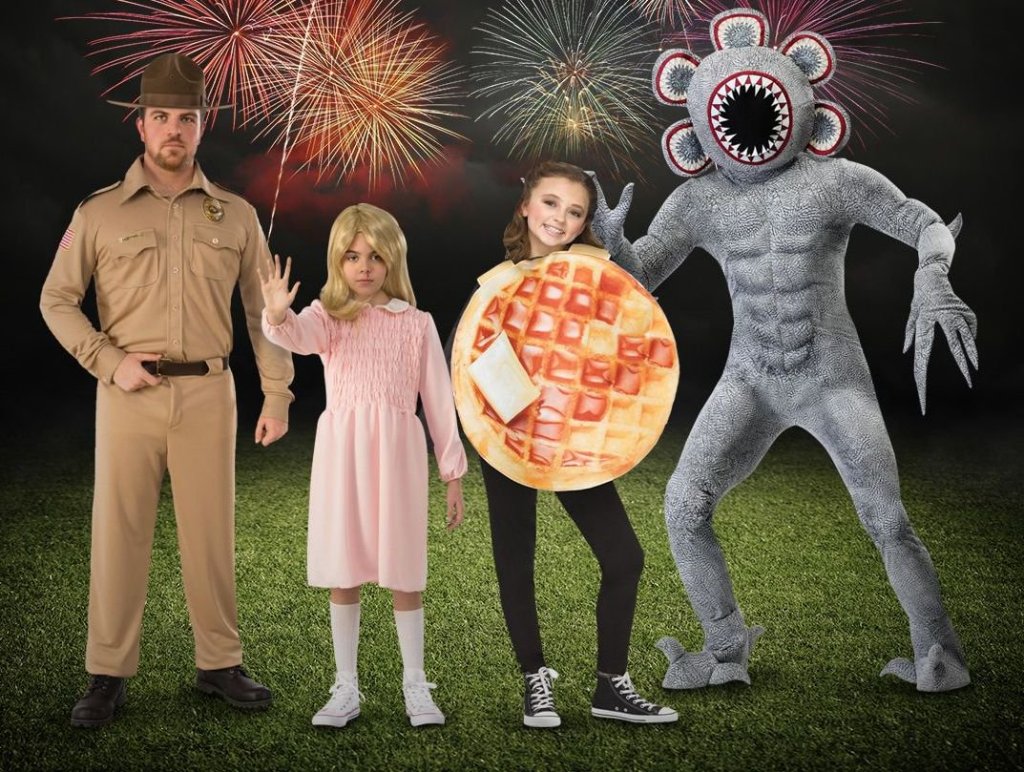 Whether you’re a family or you have a group of friends who want to dress alike this Halloween, you can’t beat the classic Crayon costume. Available in a range of colors and sizes, this costume comes with a foam tunic and a crayon top hat to complete the look. As an added bonus, this is a great costume for people in colder climates as you can easily layer it over warm pants and a coat. 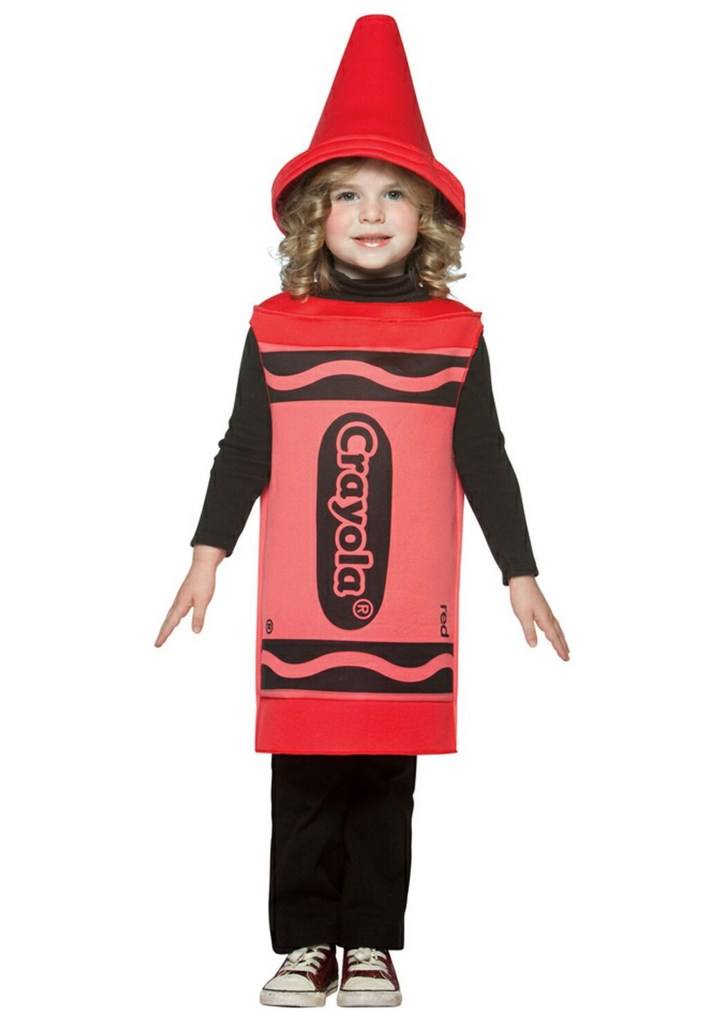 BEST FOR FAMILIES OF FOUR

If you’re a family of four, you miss out on all the great trios, but you can take advantage of this fun family Halloween costume foursome. The three little pigs and the big bad wolf is a story nearly everyone knows, making it a great costume for kids and adults alike. As a bonus, several different versions of the pig and wolf costumes are available, so you can pick whichever one you like the most and best fits your budget. 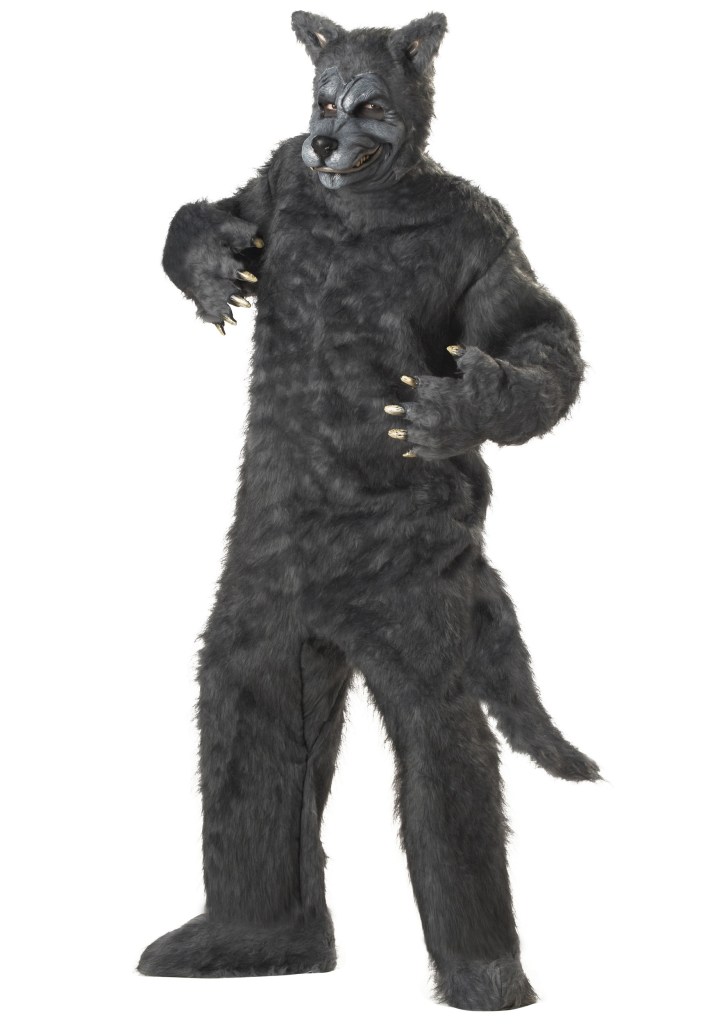 The Incredibles make a great choice for creating a family Halloween costume for families big and small. These animated superheroes each have their own power that your family can demonstrate at every door you visit. Alternatively, perfect your superhero stance to impress all the neighbors. 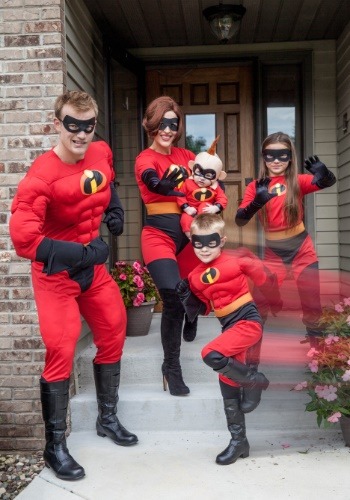 Based on one of the hottest film franchises, these superhero Halloween costumes never get old. Whether your kids want to be Thor, Captain America or Iron Man, there’s a costume to suit your tastes. Put the whole family in a Marvel costume, and you’ll be able to assemble the Avengers in no time this Halloween. Each outfit comes in various sizes and includes everything you need to pull off the superhero look. 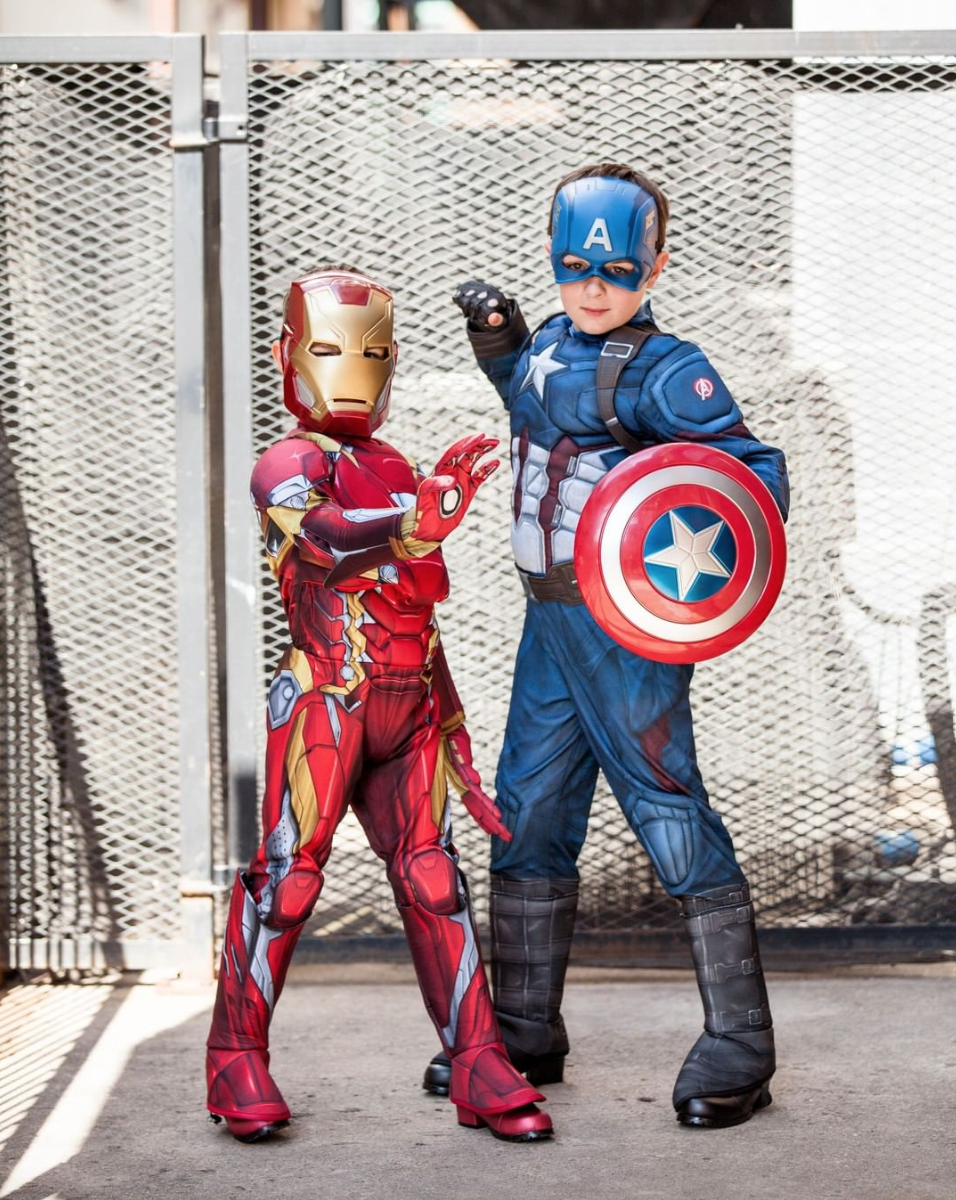 The 15 Best Costumes for Couples to Snag This Halloween