As the daughter of legendary Nirvana frontman, Kurt Cobain, and Courtney Love, 24-year old Francis Bean Cobain has surely inherited some of her parents’ wild streak and punk rock mentality.

Frances Bean made her modelling debut as the face of Marc Jacobs’ Spring 2017 campaign earlier this year. The campaign was shot by legendary photographer David Sims in Jacobs’ signature snapshot aesthetic. One of the campaign’s billboards is currently hung right above Marc Jacobs’ Los Angeles flagship store on busy Melrose Ave. The store — and billboard — is located in the affluent West Hollywood neighborhood, surrounded by a slew of other high-end designer retail stores.

Over the weekend, Frances Bean and a few of her friends decided to graffiti the billboard, effectively defacing her face with sheriff stickers and colored paints. Their updated revision of the campaign, if you will, also now includes the addition of text reading, “Witch, Witch, She’s a Witch,” smeared across the blank space with red paint. Cobain goes by the pseudonym “The Space Witch,” for her visual art career.

So just how did the youngsters get away with tagging the billboard in such an affluent and well-populated neighborhood? Well, it appears that Marc Jacobs was in on the plan and gave Francis Bean total control over the campaign, even equipping the muse and her friends with ladders and other supplies, along with sending a professional video crew to document the entire process. 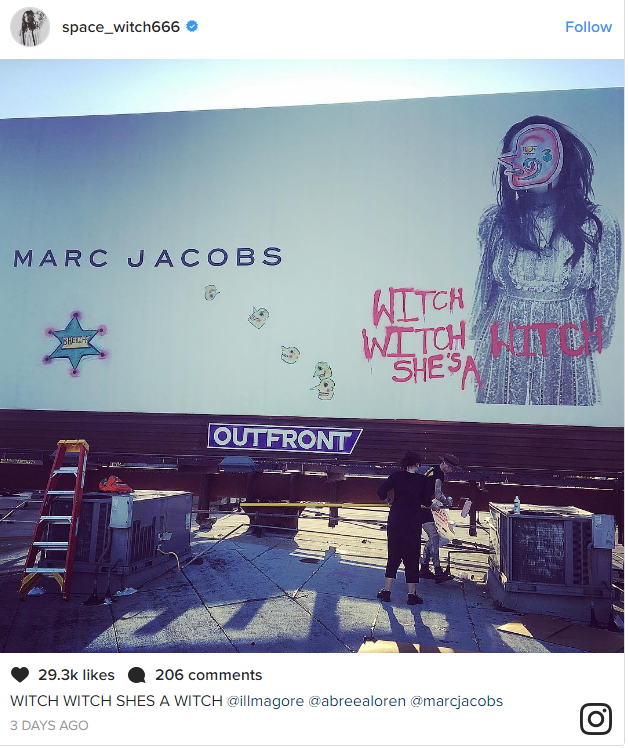 While it isn’t certain whether the graffiti art stunt was a part of Jacobs’ vision for the campaign all along, as a mock rogue social media campaign, or simply an impromptu art project dreamed up by Cobain and friends, the defaced campaign billboard is certainly bringing in a lot of attention for the brand and the retail store. The large-scale graffiti spree was well-documented on social media, including the Instagram accounts of Frances Bean and her fellow “bandits.” Marc Jacobs also posted a presumably professional video detailing the event to his official Instagram account, which seems to confirm the intent of the project as a part of the Jacobs’ larger marketing strategy.

Frances Bean has remarked that modeling for Marc Jacobs’ campaign took her completely out of her comfort zone. The young artist does not consider modelling or fashion as a future career and told Vogue after the launch of the campaign that she is thankful that she possesses talents other than “…just standing there looking cute.”

Perhaps her public stunt was an aim to comment on unattainable beauty ideals placed on women and proliferated by fashion advertising, or perhaps it was simply an artistic spin of self-expression, following in the footsteps of her iconic rock-and-roll parents.