The SPY team loves adult card games, the weirder the better — CoolCats & Ass Hats, What Do You Meme, Exploding Kittens and, of course, Cards Against Humanity. Ever since Cards Against Humanity’s successful Kickstarter in 2011, countless new card games for adults have appeared. Some of these games come from big-name companies, but anyone with some imagination and a knack for crowdfunding could come up with the next viral party game. Adult card games were one of the top gifts of the holidays in 2019, and we’ve written about many of our favorites before. Now, we’re excited about a clever new card game with a twist: Game of Phones.

While other party games encourage players to put down the smartphone and engage in good old fashioned face-to-face interaction, Game of Phones requires players to use their devices to hilarious effect. Like similar card games you may have played, each player takes turns being the judge (or influencer, if you’d rather call it that). The judge selects a card, which prompts the rest of your crew to take some inane action using their phones or tablets. The judge then selects the best result and declares a winner, who collects that round’s prompt card. The first player to collect 10 cards (or five, six or 15 cards, you decide) wins the game.

The fun of Game of Phones is in the prompts, which may require players to mildly embarrass themselves to win. (“Show the worst selfie in your camera roll”.) The cards will ask players to complete challenges such as “Find the weirdest Google Image search result for your name” or “Build an emoji masterpiece”. Players may also be required to search through their text messages or take a selfie to win other cards. To win, competitors will have to race to find the funniest, most bizarre or most meme-worthy results the internet has to offer. Unlike adults-only games like Cards Against Humanity or drinking games, Game of Phones can be enjoyed by anyone with a mobile device, although the recommended age is 13 and up. You can play with your most outrageous friends and go wild or keep things completely PG at family game night. 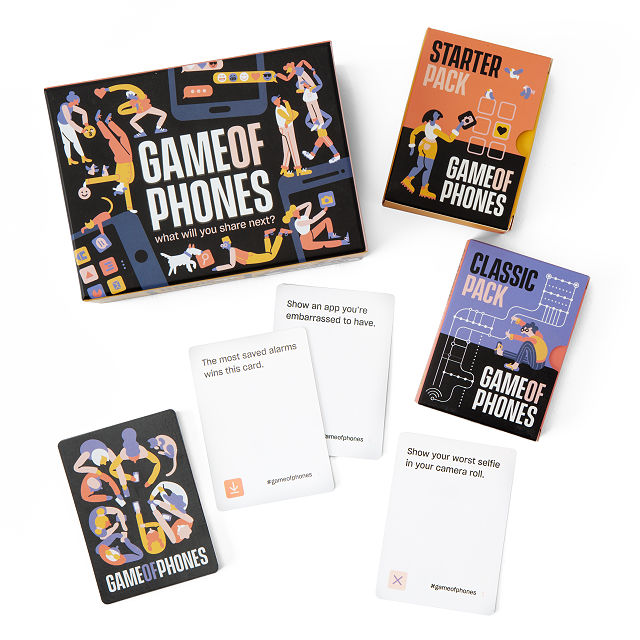 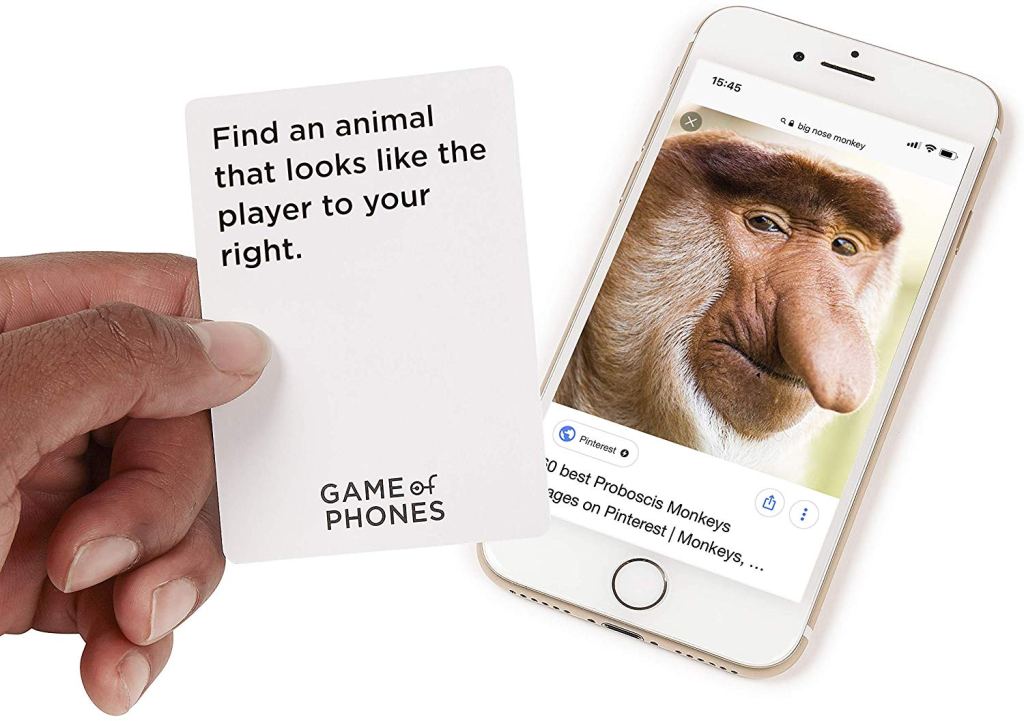 Game of Phones was created by Breaking Games, the company responsible for party games such as Poop: The Game and Sparkle Kitty. The original version of Game of Phones is still available on Amazon, but the new edition is available at the Breaking Games website and Uncommon Goods. The new edition features a more colorful design and additional prompts, and that’s the edition we would recommend.

Each Game of Phones box contains a book of rules, a Starter Pack and the Classic Pack. There’s even an offline deck of 50 cards that are designed to be used without an internet connection. That pack is perfect for remote camping trips or that time of the month when everyone runs out of data. No app is needed to play Game of Phones, although some of the prompts may ask players to dig through the apps on their phones. To play, all you need is a love for digital culture and a group of friends, although at least three players are needed to make the game worthwhile. And because the internet is a strange and ever-changing place, even familiar prompts can yield surprising results upon replays.

If you’re always on the lookout for the next viral party game to play with your friends and family, then it’s time to order Game of Phones. You can bring the internet to game night without being completely glued to your phones the entire time.

The 7 Best Tailgating Games for Pre-Game Fun in 2020