Famous for its complex story lines, visual beauty and its notoriously expendable main characters, Game of Thrones is a truly epic phenomenon. And like any great epic, it has music to match. The score of the HBO series, based on George R.R. Martin’s voluminous “A Song of Ice and Fire,” is one of the most captivating pieces of cinematic music around.

Composer Ramin Djawadi’s Game of Thrones score is a masterpiece. Instantly recognizable, it has been covered by everyone from metal bands to YouTubers editing together the bleating of sheep or the barking of dogs. And now with the Game of Thrones Live Concert Experience, you can hear it in a truly epic format; live, with an 80-piece orchestra and featuring Ramin Djawadi himself as conductor.

Live Nation brings us this production, scheduled to tour the U.S. through April 2, 2017. Along with the unforgettable music, the live show pulls out all the stops and steps into the great operatic tradition with amazing 3D visual effects and a telescoping LED wall. Which is all to say, this is the kind of show that’s worth crossing the Narrow Sea or braving the journey over The Wall to come and see. 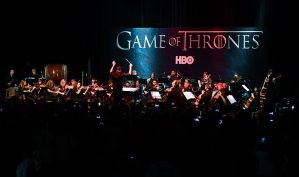 For now, tickets are still available on Ticketmaster so you won’t have to battle any Sellswords or Wildlings for them. While the main themes will be familiar to viewers of the show, the live experience adds new effects and some never-before-heard features and motifs, including new vocal sections, as well.

It’s quite fitting to celebrate the Game of Thrones phenomenon with a mind-blowing concert, as the Epic form itself originated as live music. Before there was “Valar Morghulis” and “The Wall,” the original epics, the Illiad and the Odyssey, were sung, rather than spoken or read. Their performances were said to be blockbuster events lasting up to to 12 hours. Winter may be almost over, but, to paraphrase the Starks, “music is coming.”