We can all agree that bigger is better, right? Right. Your average made-for-adult pool float is nothing compared to something twice, three times or even four times the size. And because the wide majority of massive pool floats are doing the most, you can expect luxury additives such as numerous cup holders, coolers for beverages, mesh foot bottoms and even disco balls. Essentially, large pool floats put every other pool float you own to complete shame. Sorry, little guys.

That said, you’re going to need a larger body of water to fit your giant pool float, so if you’re dealing with an above-ground pool or a blow-up pool, stick with whatever you just bought on a whim at Walmart. But, if you’re living that lake life, have a large pond in the backyard or a really big built-in swimming pool, check out all of the biggest pool floats you can buy online for summer fun times one hundred.

You can’t talk about giant pool floats without starting with FUNBOY. For those of you unfamiliar, FUNBOY is the ultra-viral pool float and kiddie pool brand that reclaimed the classic kid-like pool essentials so adults can have fun in the sun, too. The Giant Cabana Dayclub is a massive 10-foot long, 7-foot wide pool float featuring all the bells and whistles you’d expect from a giant pool float. Expect four cup holders, two mesh foot baths, a removable mesh sunshade, a central cooler and more. 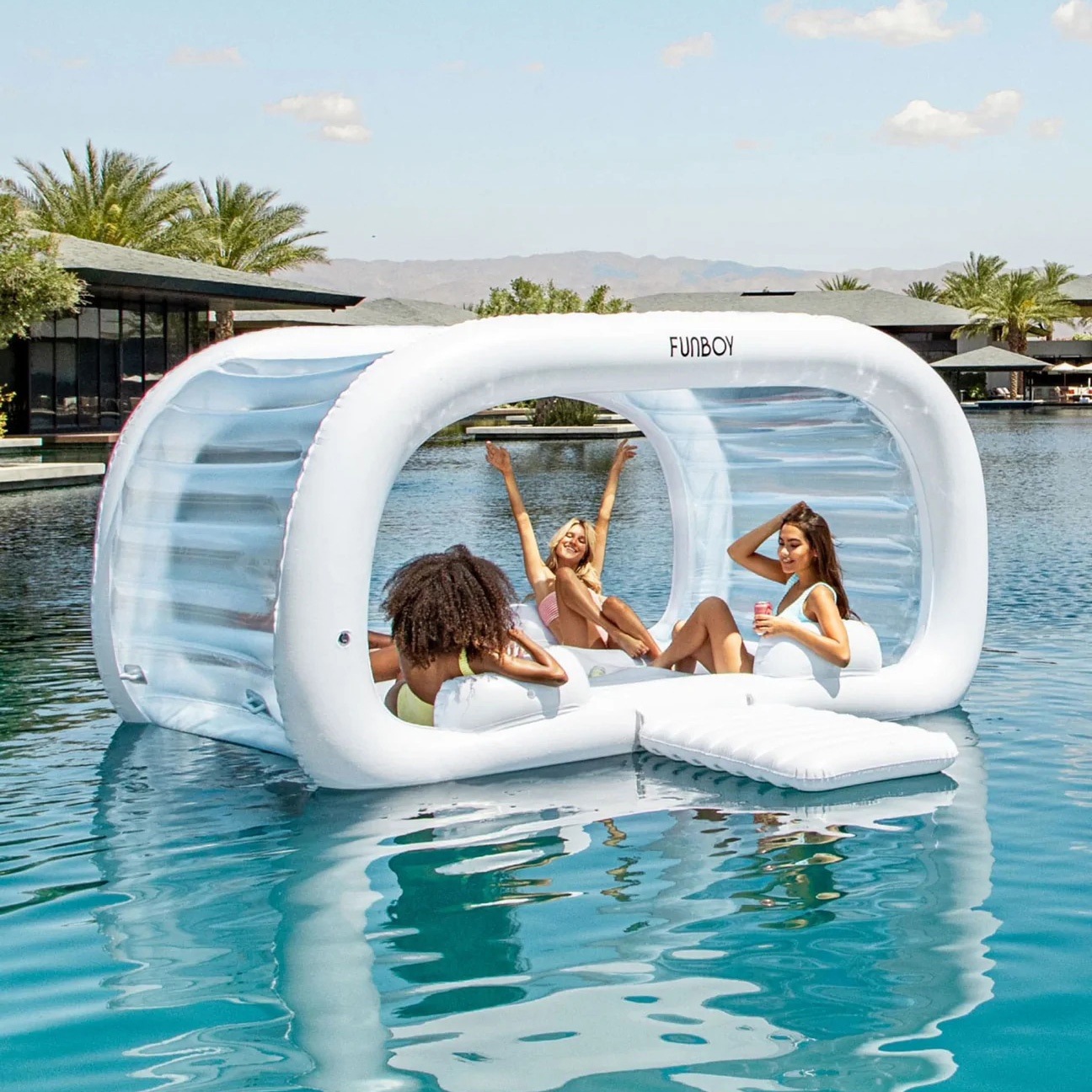 Comfortably fit up to six people with the Bestway Hydro Force Tropical Breeze Raft and float on forever. This massive pool float is packed with backrests and cup holders to make relaxation effortless on the lake or in the pool. Not only that, but the huge raft includes a cooler for stashing drinks for easy slurping. Complete with a detachable sun shade that will block you from a burn, all that’s left to do now is blow this bad boy up. 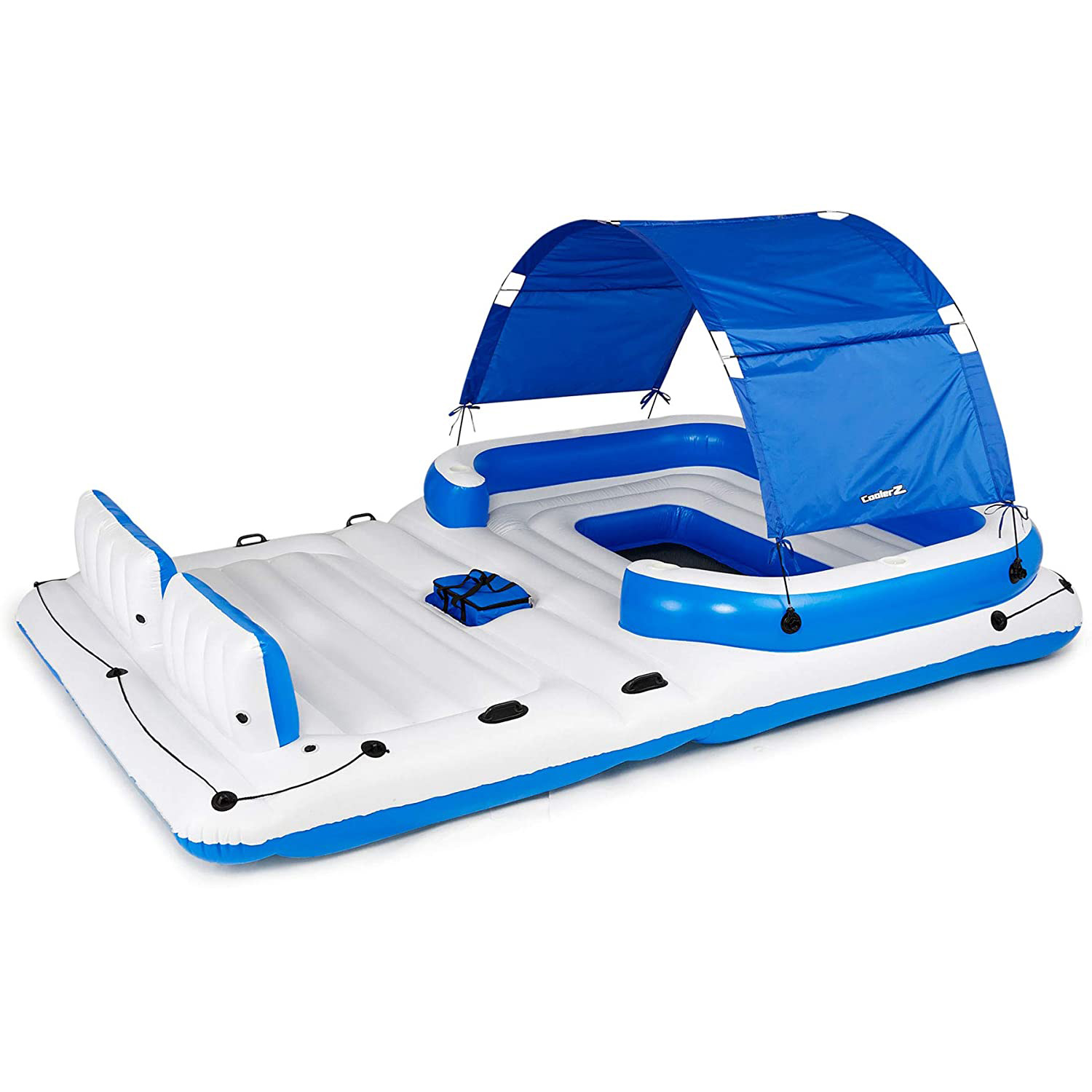 Unicorns are magical. So magical, in fact, that you can fit person on top of person on this giant unicorn float from Amazon. This massive float has three seating sections where you can squeeze two people per area. In addition, there is a large mesh foot bath in the very middle to keep your feet cool when lounging. To top it off, there are numerous cup holders and a cooler area to keep drinks when you aren’t sipping them. Our E-Commerce & Special Projects Editor Tyler Schoeber recently had the experience of testing this giant pool float himself on a lake during the Fourth of July and tells us his day would have been incomplete without it. 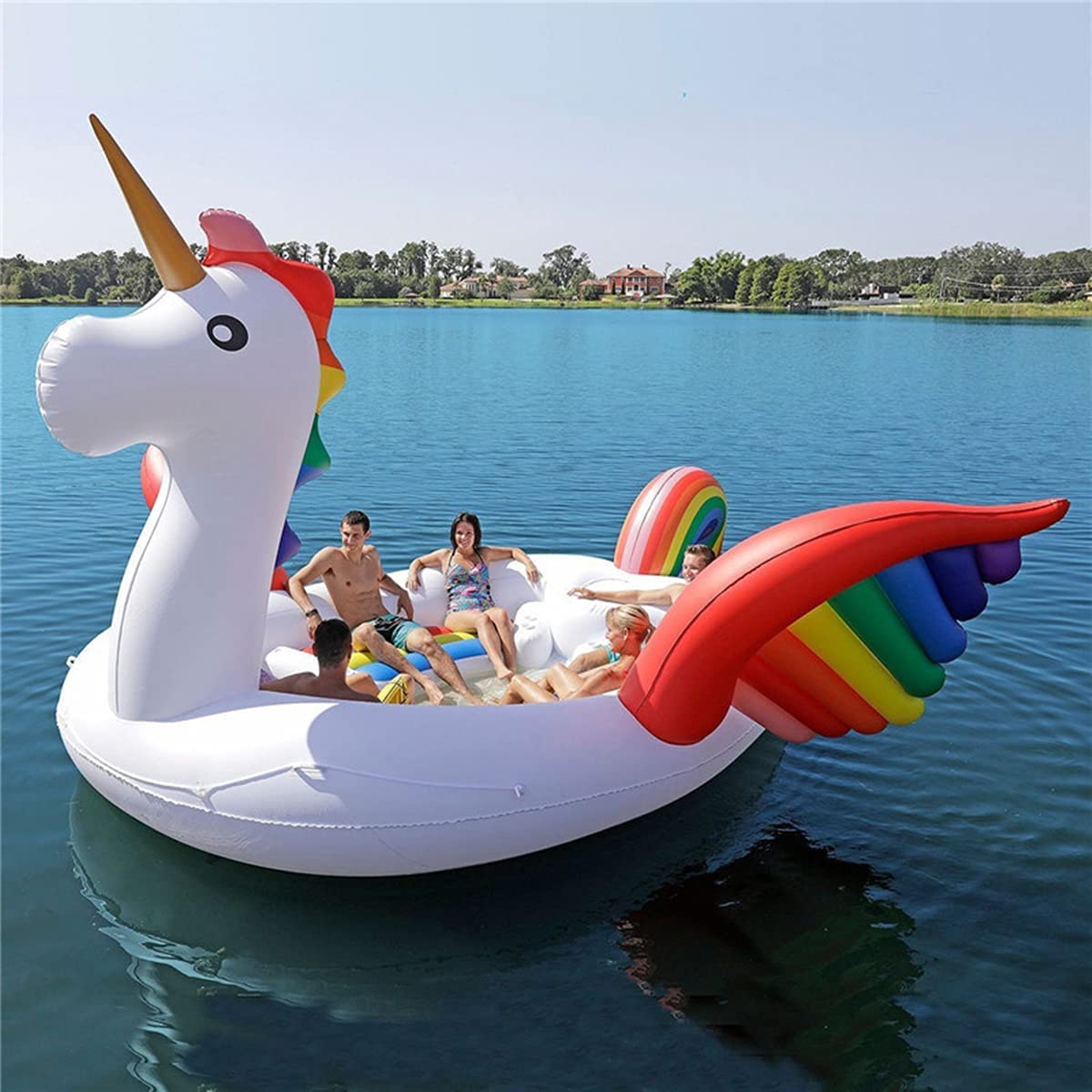 Take your boogie-woogie to the swimming pool with the Disco Dome, FUNBOY’s ultimate party-centric float. This circular float can hold four people comfortable for a day party that simply never stops. It comes with an inflatable hanging disco ball dangling from the ceiling, a mesh foot bath and cup holders to keep your cocktails. Don’t forget to throw on some Donna Summer before jumping in! 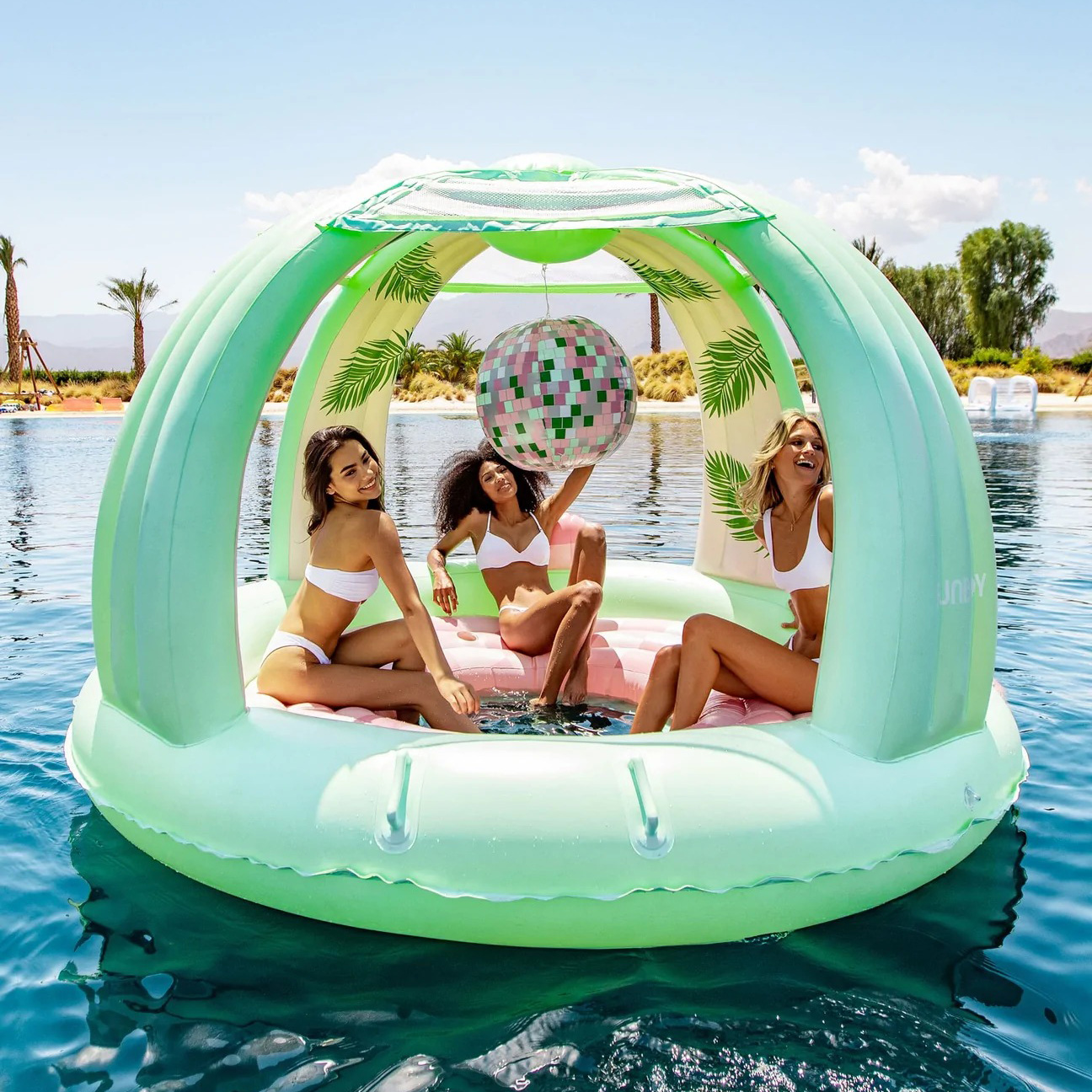 As probably one of the largest pool floats on this list, the Splash ‘N Chill can hold up to seven people comfortably for party full of loungers day in and day out. As you might expect (given that this has been a theme), the float comes with multiple cup holders, a cooler and a mesh area for your feet to soak. In addition, this float comes with a large lounge section and a blow-up enclave that makes it easy to get in and out of the water when desired. Attach this one to a boat and lounge out in the middle of a lake next time you’re out. 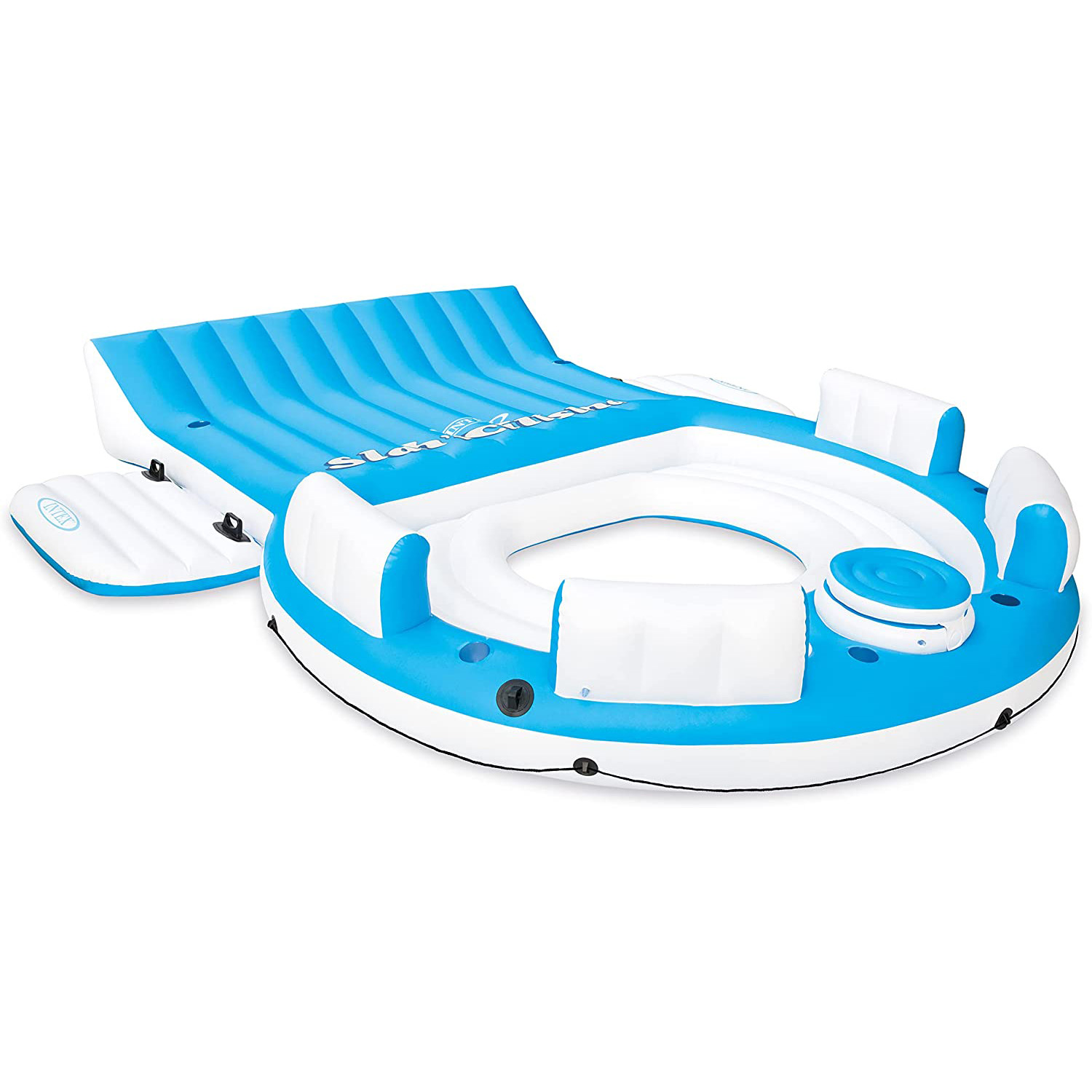 Did somebody say pizza? This huge slice of pizza isn’t edible, but it is super comfortable to lay on. Each is packed with two cup holders and a thicker crust that gives your head a nice pillow for resting. Topped with mushrooms, olives and pepperoni, we’re sorry if this one makes you hungry. Maybe it’s just a sign that you should pick up a pizza pie for dinner tonight. 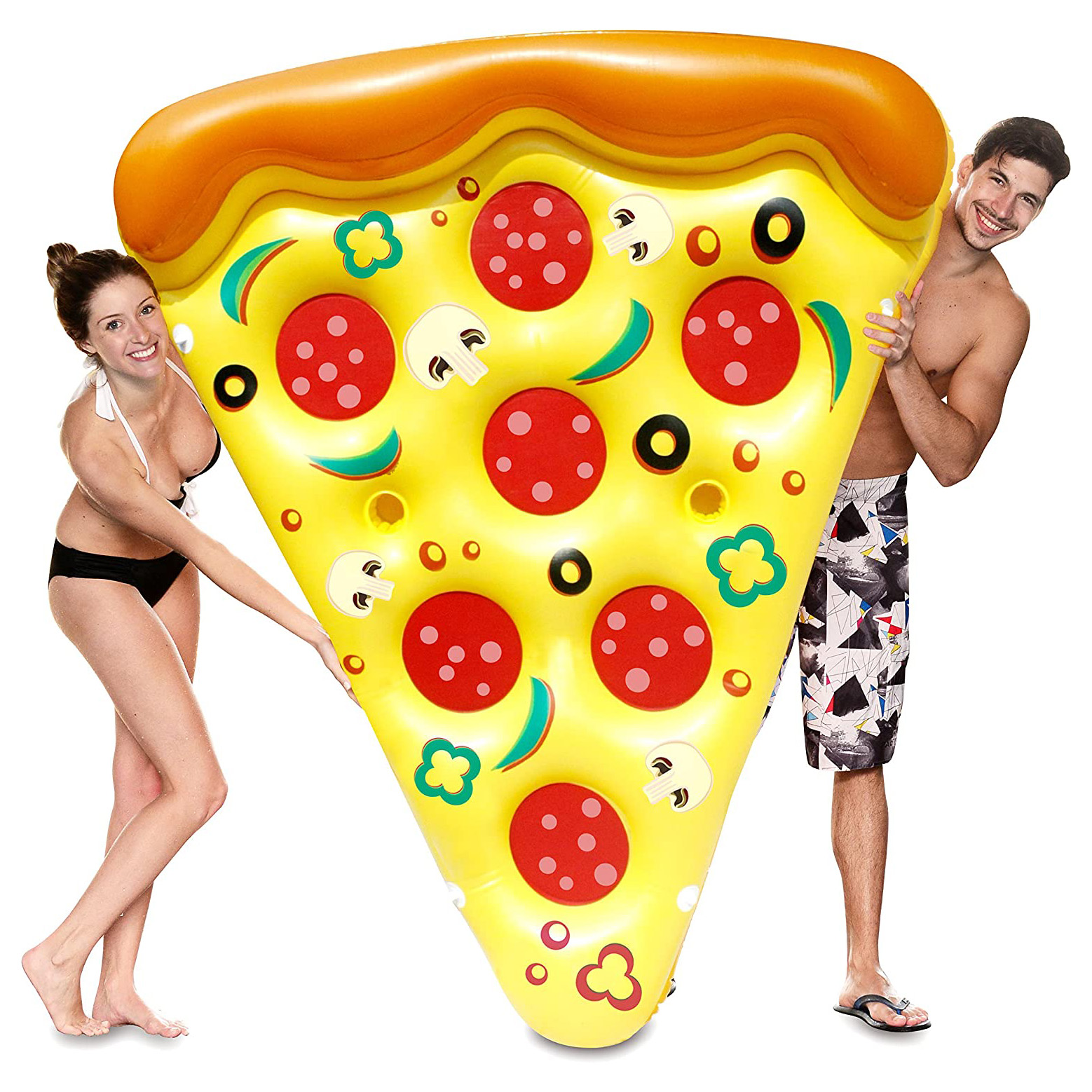 With four chairs, two loungers, six cup holders and two coolers, you and your group are going to be ready for whatever on this floating island. This pool float is built with heavy-duty PVC to remain extra-durable no matter what the world brings it. It’s comfortable to lay on and has a mesh foot bath to help you cool down when relaxing. This is also a great option to bring out to the lake for those of you with access to one. 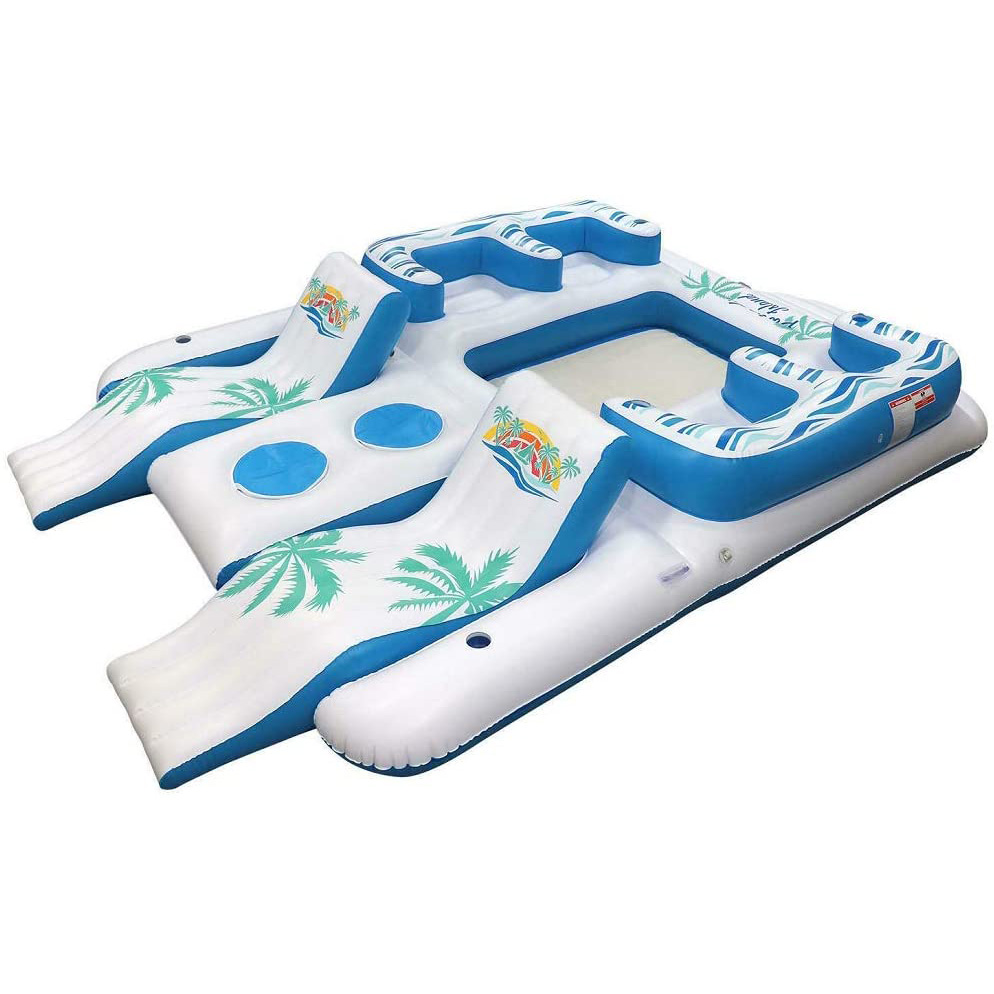 Barbie simply wishes she could own this pink limo float from Member’s Mark. Take your retro sports car for a drive without ever turning it in by floating in this gorgeous pink masterpiece. It’s got numerous places for sitting and lounging as well as a foot mesh bath for soaking. Because everyone needs a drink, expect six cup holders and two coolers. 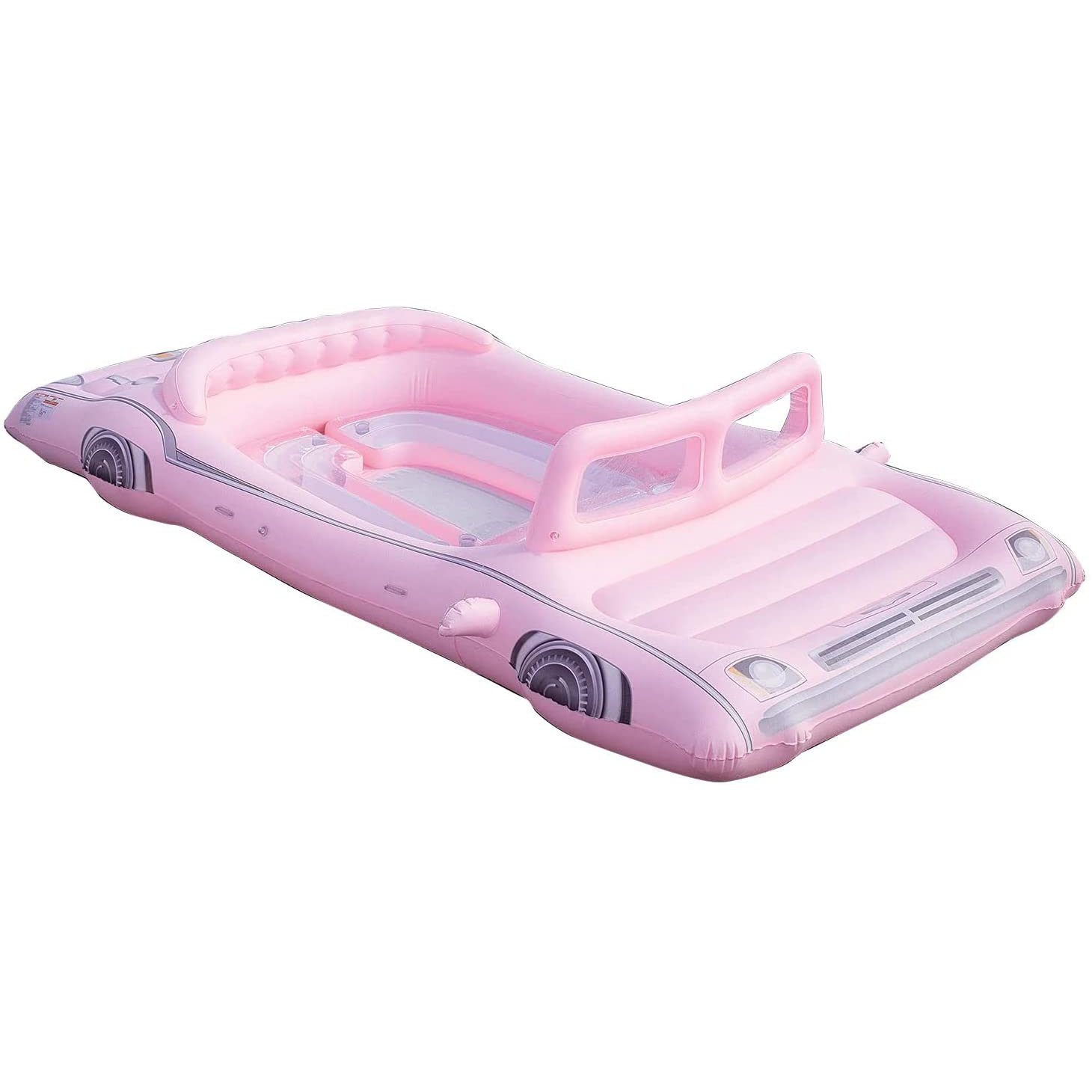 Buy Now on Amazon
Marco? Polo! Check Out the Best Swimming Pool Games for All Ages