When asked if he had any style advice for older men, Sam Waterston’s answer was two words: “Call Allyson.”

Allyson Fanger costumed all seven seasons of the hit Netflix series Grace & Frankie, earning five Emmy nominations for costume design and making Jane Fonda’s Grace and Lily Tomlin’s Frankie into style icons. The characters’ ex-husbands Sol and Robert, played by Waterston and Martin Sheen, however, are just as noteworthy when it comes to fashion and understanding character through clothing. As Waterston points out, the sartorial aesthetics of the show are a character unto themselves.

“Starting with Theoni Aldredge at the New York Shakespeare Festival up to and including Allyson B. Fanger on Grace and Frankie, I’ve been getting character help from great costume designers all my career,” says Waterston. “Allyson made Sol fun and funny.”

Related: 22 Stylish Hawaiian Shirts for Men of All Ages 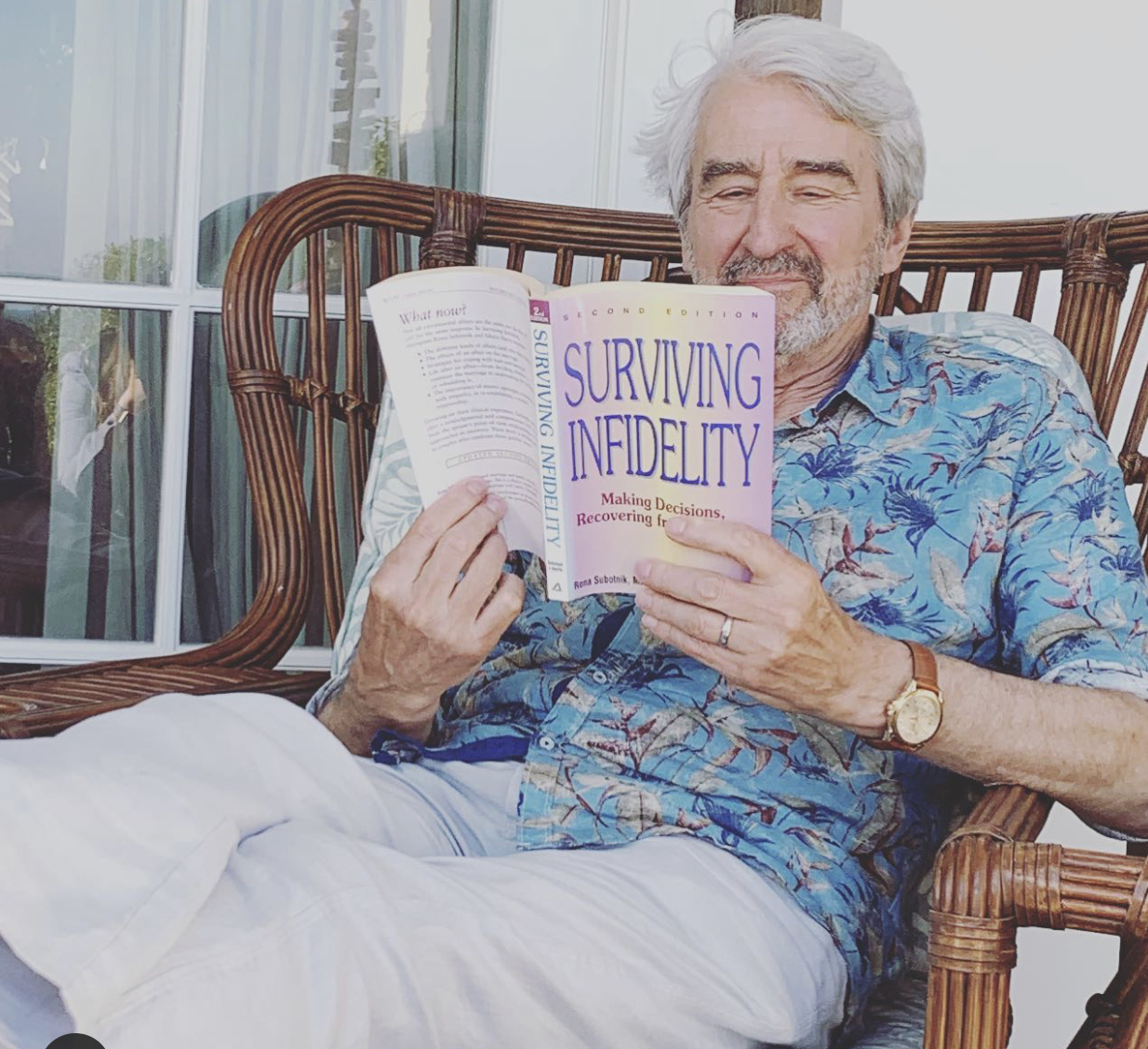 Robert is the Brooks Brothers and Ralph Lauren everyman (his style was modeled after Fanger’s own father, with a little added flair). Sol is a bit more crunchy granola — like the wealthy guy grinding his own peanut butter at the local Whole Foods. Each is true to himself and perfectly tailored, values Fanger says all men would benefit to adopt. Waterston did so literally: “I brought a bunch of stuff home with me when the show closed,” he says.

And it’s easy to see why — Fanger’s looks for Sol and Robert are endearing and genuine, which is why it was such a delight to pick her brain about creating these characters and her style advice for men of all ages.

SPY: How would you describe Sol and Robert’s style?

Allyson Franger: Robert, very traditional. Much of a counterpart to Grace, a person that prescribes to rules of style that they’ve grown up with. And he’s very polished and he is very put together. What we did in the subtlest way was put in more color pops in certain moments than you would see in your average guy who dresses this way. Like there’s a teeny bit of pizzazz there. He lived life for so long not owning his own sexuality, but it was always there for him. So it was sort of like a nod to that.

And the counterpart to his character, much like Grace and Frankie, is Sol. Sol was always a little bit of a bumbler. His clothes kind of were put together in a way that was slightly off all the time. But we used a lot of texture on him. Robert’s color palette was very classy. And Sol we put in kind of like burnt orange, and brown and like nubby textures. I always said, they probably went camping as a family when the kids were growing up. So I would get him these camping shirts from Cabero. And they’re great. And they looked really good on him.

And I figured that Frankie got those shirts, because I found those shirts at a boutique called Citron in Santa Monica, a store I would go to for Frankie. So my whole backstory is like, “Oh, she would get these shirts for him when she was shopping.” They really became a big part of his character.

I love the backstory of Frankie buying them for him because it’s so illustrative of their relationship. Sol is so supportive and loving to Frankie that she could just bring something home and be like, “Wear this,” and he’d be like, “Okay.”

Frankie and Sol are just sort of chaotic. They have chaos in the way they dress, which is just beautiful. It’s like a beautiful chaos. I love both the looks.

Martin himself is a pretty casual dresser, no?

He really likes his hoodies, that Martin Sheen. I had to work hard to keep those at bay. By the end of the whole thing, he’d worn me down a little. I was like, “Okay, you can wear a cashmere hoodie. Only if it’s like a nice cashmere hoodie.” So we did get some of those in at the very end. 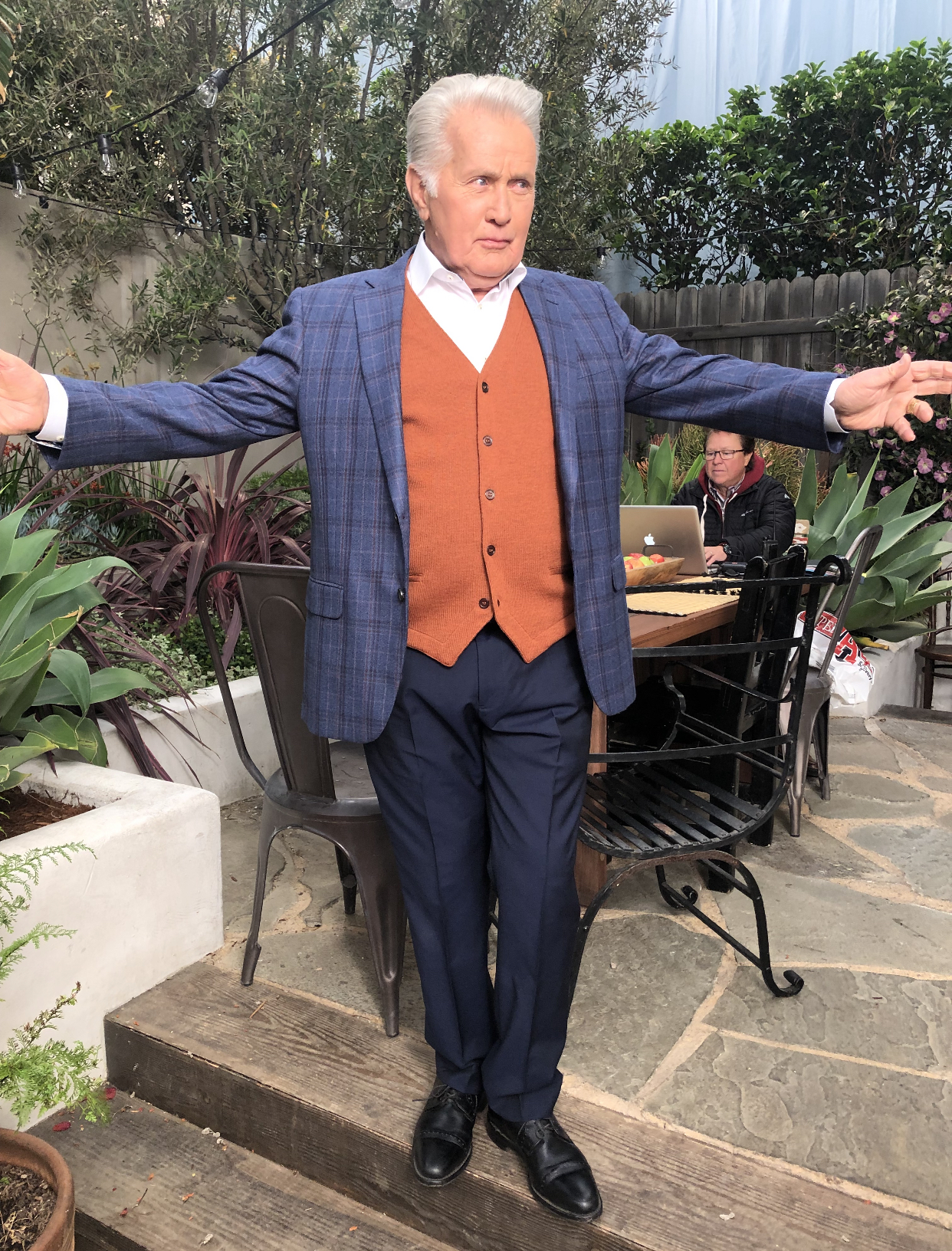 Were there changes that were made intentionally over the seasons to how they dressed?

Not as much as Grace and Frankie. But they evolved because their lives changed. They retired. They were home more. They had different types of activities. But they definitely became more casual. And I guess, yes, more relaxed in themselves.

Men of that age aren’t going to really change the way they dress too much at a certain point. Like the look that they feel comfortable in, that’s worked for them their whole lives. I would say that, besides the fact that their lives changed and the stories changed and they became more just casual in their activities, I feel like they really maintained their general silhouettes. Still, I think that Sol got a little less awkward as we went through and a little more dashing, I would say.

What is different about costuming two characters who are 70 plus?

There’s sort of a beauty to telling the story of someone who’s lived a long time because you can bring in so much. There are so many personal bits and back stories that can be told, and relationships that they’ve lived.

I had fun with all the guys on that show because they all had their distinct different looks. Like Bud and Coyote also had a relationship to Sol, how he dressed. I think that viewers could catch that, that a lot of what Coyote wore were pieces that he probably got out of Sol’s closet at a certain point. Or because he was very thrifty, and he would thrift things, he didn’t have a lot of money. And then Bud was like the work Sol, but with a little more of a rote type of a Robert character.

The one thing about dressing older people is: You can’t put them in clothes that are meant for younger people. Not only because it’s wrong, but also because the cuts are not the same, which is something I learned on this show early on. You have to pay attention to cuts and to silhouettes that suit a body that is older.

What does Sam think about Sol?

Sam was great to work with. He was very collaborative with me. Sol was probably the most awkward in the first season. But with an actor and a costume designer, it’s like the actor will bring so much to it also, right? So if an actor wants to be bigger in their acting, then I can pull back. So we kind of have to work together in that way. And so I think he did want that in the first season, but I think, as it went on, he really found it more and more in the acting and didn’t need it as much. So that’s why I feel like in the later seasons, he looked so great and handsome, but still brought that Sol-ness to him. There [were clothes] a little bit weird but in still a handsome way. He still is well-tailored, which I feel is also very true to that kind of person, like an older man who is wealthy, even one who is earthy and all of that.

What do you think older guys can learn from Sol and Robert on how they dress?

I think they can learn about buying quality pieces. I think, especially if you’re a Robert, your look is not going to change a lot. But investing in quality pieces and then getting them tailored and having them fit and taking care of them is huge. You can go a long way with even 20 great pieces. And you can be fluid and mix them. Find the brands that fit you right. I kept going back to the same brands the entire series, which has spanned over like 10 years.

What are some of Sol and Robert’s favorite brands?

I was in Palm Springs with my family, and this store wasn’t even open, but I walked by for some reason and I was like, “Oh my God, I have to go shopping for Sol in here.” So I went back the next day, bought like five shirts. And then Citron are the short sleeve shirts with velvet, with like swans, and the flowers and all that. And Cabero.

There was a store where I got a lot of clothes for Sol from that I would love to give a little shout-out to, it’s called Sy Devore. And it’s a small men’s boutique in the Valley here. He had brands that other places don’t carry. There’s an Italian brand called Barena that I really liked for Sol. And almost all his pants were Tommy Bahama. They just fit him right. They had a good rise to them. And I was just like, “Okay, it’s Tommy Bahama. This is what it is.” And we just stuck with it. Every once in a while I’d get a Tommy Bahama jacket for him too. Oh and L.L. Bean. And Patagonia! All those camping brands.

I imagine Robert wasn’t wearing too much Tommy Bahama.

No Tommy Bahama. My dream brand was Brunello Cucinelli. It’s cost-prohibitive for television. We did Ralph Lauren, Brooks Brothers, Brioni. There’s a store called Caroline Company, which sadly is not there anymore. Sid Mashburn was a really good resource for Robert. Their main store is in Atlanta. I love their stuff. It’s a little preppy, but it’s more traditionalist than anything else. Just really good quality, clean lines, nice cuts. I’ve never seen one brand that has so many blue striped shirts in my life. But every one of them is different.

Can you talk a little bit more about that, like what wardrobe cues you use in their relationship?

There were moments when I would connect them. Distinctly, I’m thinking of another season at the wedding or when they’re feeling much closeness to each other. I had Sol’s tie be almost the exact same color as Robert’s jacket. And that’s the kind of thing that I, as a customer designer, do that you might not register it. But it translates even though you don’t know that it’s translating.

Did the guys ever borrow their costumes?

Martin, if he had an event or something, would ask me to pack him up an outfit. Invariably, always. He wears his hoodies and his T-shirts and his jeans and he just, like, walks on the beach. So when he had an event or something, he would always ask me to pack things up. And at the end, we made sure he got a couple nice suits and some pieces that he did take. He’s so cute. And he was so grateful. He’s such a lovely man.

And then Sam was interested in a lot of his pieces. Sky Dance [media company] owns the clothes, but there was an arrangement of what clothes he could take or was a combination of being gifted and then some purchasing. But he took quite a bit.

After speaking with Fanger, we pulled some specific brands and pieces to help men who want to up their style game in the image of Sol or Robert.

To get the “Robert” look, try these specific pieces on for size:

To get the Sol look:

The Best Places To Buy Men's Suits Online in 2022