It’s been the talk of the town all weekend — the Hamilton movie is finally on Disney+. Please hold all applause until the end of the article.

The Hamilton movie was all over social media during the long Fourth of July weekend after its release on July 3. But Hamilton superfans have been counting down the days for weeks.

Featuring the original cast, this “live” version of the widely popular cultural phenomenon was shot using six cameras as it was performed on the actual real-life Broadway stage. The musical film was originally made for a theatrical release worldwide, but thanks to COVID-19 and the current worldwide pandemic, Disney opted to release the movie on its popular streaming service, Disney+.

That means instead of listening to the soundtrack for the hundredth time or waiting for the touring production to come to your city, you can now watch Hamilton whenever you want from the comfort of your own couch. And if anyone can bring a smile to your face, it’s Lin Manuel Miranda. 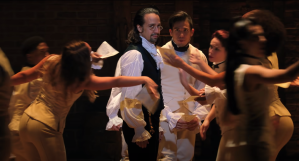 So if you’re ready to start streaming Hamilton right now, then you can sign up at Disney+ for just $8. There are a few Disney streaming options to choose from, but you’re just a few clicks and dollars away from watching Lin Manuel Miranda.

Can You Watch Hamilton for Free Online?

If you’re wondering whether or not you’re really about to pay and subscribe for Disney+ just to watch a musical, we’re with you. Since most streaming services offer a free trial, there are a lot of superfans hoping to watch Hamilton online for free.

If you’re on the fence, consider this: tickets to see Hamilton on Broadway, and even the touring production, cost hundreds of dollars, if not thousands for prime seats. Yet now you can watch the original cast perform whenever you want for just $7. When you think of it that way, this is actually an incredible deal for Hamilton fans. And that doesn’t even account for all of the Marvel, Star Wars and Pixar movies available on Disney+, too.

Over the holiday weekend, downloads for Disney+ skyrocketed 72% because of Hamilton fans. So if you’re sold, here’s the low-down on the various subscription offerings from Disney+:

I know what you’re thinking, “There has to be a way I can watch Hamilton online for free, right?” We’re here to tell you, sorry. It’s not going to happen. The only way to watch Hamilton online for free is by snagging a password from a roommate. Overall, for such an affordable monthly price and with hundreds of throwbacks from your childhood, we suggest you just round up the couch pennies and subscribe.

Buy Now
Finally Caved and Got a Disney Plus Subscription? Here Are the First 10 Movies You Should Stream