Although best known as Brittany Pierce on the Fox musical-comedy TV series Glee, Heather Morris started her career as a dancer long before before she landed her role as McKinley High’s resident ditsy cheerleader. Morris got her big break as a backup dancer on “The Beyonce Experience World Tour,” performing all over the globe and on the likes of The American Music Awards, Saturday Night Live, and The Ellen Degeneres Show.

While much of her career has been a mix of dance gigs and TV appearances, this year Morris is focusing on a new venture: her own podcast, dubbed “The Dance Room.” Morris is joined by dancer, choreographer, and teacher Ava Bernstine, also known as Ava Flav, to bring you stories of their dance careers, interviews with other dance industry professionals, and recaps of the best dance TV shows, including Dancing With The Stars and So You Think You Can Dance. Filled with lots of laughs, you won’t want to miss them talk dancing in stripper heels with Beyonce or what it was like working with Justin Timberlake.

We can’t wait! This Thursday we have two very special, very secretive guests. Don’t forget to tune in and subscribe to find out who we have in the studio with us 🎤🎤 💃🏼💃🏼

We caught up with Morris to chat about her inspiration for “The Dance Room,” what it’s been like to transition from TV to podcasting, and how dance has helped her — and can help others — build confidence.

Can you tell me a little bit about the podcast? As someone who is not a dancer, hearing about the dance industry on the show has been eye opening.

That’s kind of what I was aiming for. The podcast started a little bit different—it was driven more towards recapping and getting to hear from dancers in the industry, but it’s kind of turning into something that gives both dancers and non-dancers insight into the industry. [Ava and I] wanted to give you words that you wouldn’t know and explain things a bit deeper, because there are Glee fans and people who like Dancing With The Stars who listen to the podcast and want to hear a little bit more about what goes on behind the scenes. So we’re trying to drive it towards two different markets: dancers, or moms that used to dance, and then also people who have no idea what the dance industry entails.

What inspired you to start the podcast? Podcasts are super popular right now, but The Dance Room feels unique.

It started with this idea that sports channels and sports recap shows are so popular among men. It’s just nonstop. There are so many podcasts about sports, so many shows on ESPN, and I’m always thinking, why are there so many? And then I thought, why isn’t there something like that for all the dance shows? Why is there never a second opinion, and we only hear from the judges? It sparked this idea in me and I called my manager and said, “I have this great idea, I want to start pitching it to companies.” So she brainstormed with me and fine-tuned things, like call Becca Tobin, because she does “LadyGang,” and she helped me put a format to it. Then I actually got in contact with PodcastOne, who “LadyGang” is represented by, and my first meeting I went in there and they were like, “Yep, let’s do this,” and signed us right away, which is unheard of. I never, ever get that when I go into meetings.

How has it been different going from TV to a podcast, where no one can see you and you’re speaking directly to your audience?

Oh my god, I love it! Well, I have been trying to host for a couple years now while also simultaneously trying to break into the voice over industry, which is super difficult to break into. So when you do voice over auditions you can audition at home, so I bought my own recorder and my own microphone, and I’ll do them in my own office. So I’m used to that, and I like not having to get dressed for work and just kind of showing up. Although, it’s proven that a lot of guests do like to get dressed for this, because it’s fun, it’s a podcast, they’re excited to take the picture and post it. It’s kind of not just a podcast and the audio, but also the digital content. So I don’t really get to dress down as much as I would have hoped, but it’s still so much fun and so conversational. 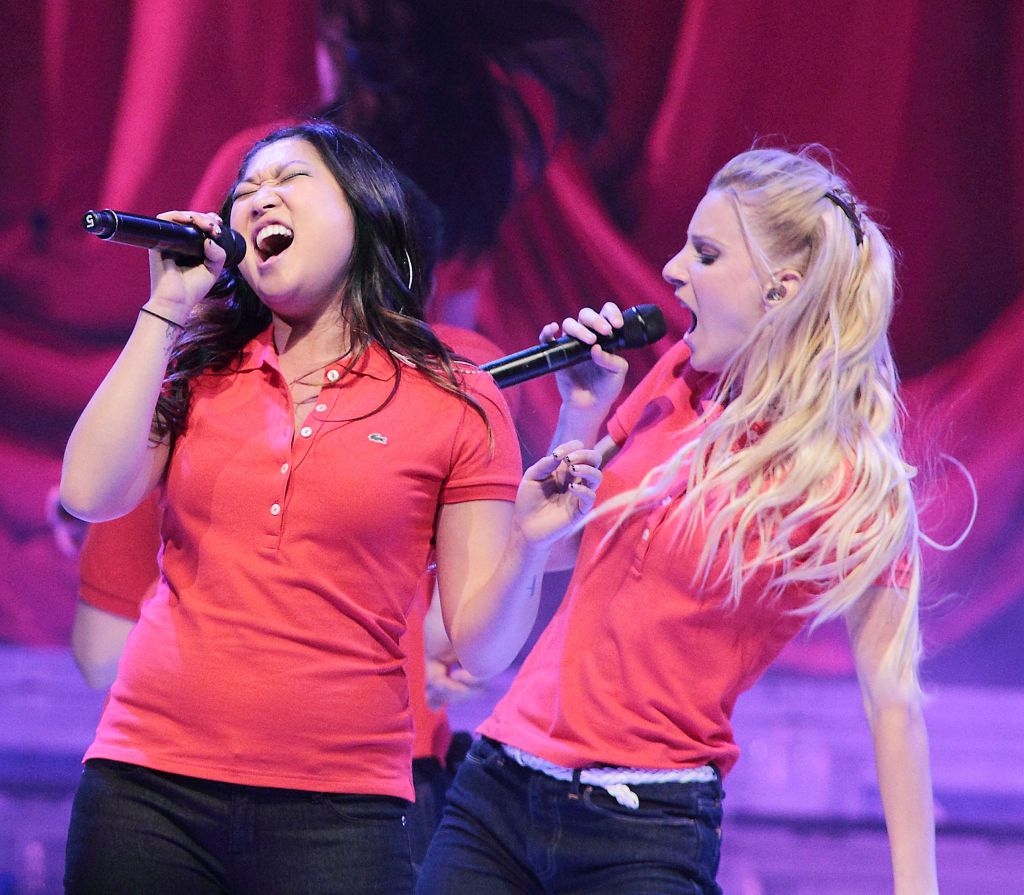 I know you originally decided to study journalism. What inspired you to drop everything and move to LA to start your career?

I never planned to be a dancer. I was always dancing—it was my sport of choice, I was in the competition world, it was my life after school. But when teachers would ask, “Does anyone want to be a professional dancer?” I would never raise my hand, just because I knew they didn’t make a lot of money. Most dancers are struggling, so I never wanted to do it. And then after high school I was like, “Maybe I’ll go to college, I’ll get my degree.” I thought maybe I’d do journalism and broadcasting because I’m fascinated by the news, or I always thought being a weather girl would be super fun to do. But I didn’t really clarify my major my first two semesters, and after I did two semesters I was like “I’m out, bye. I want to go dance.”

Do you think dance has helped you build confidence?

I think there was a time in my life when I needed dance the most for my confidence. It was my backbone and it was there for me. I lost my dad at a young age, right before I went to high school, and so it was a hard time for me. It really supported me when I needed it at that point. And once I moved to LA, it skyrocketed my confidence by feeling like an actual woman, because when you’re in high school you don’t really know what a woman is, but once you get out you’re kind of thrown into the world and you’re like, “Okay, well, I don’t want to be sexy, but I don’t want to be a tomboy either.” So I think it has helped me find what being a sexy woman means to me, and that’s really what dance has done for my confidence. Plus, dancers in general are constantly having to change their look, so you find your look really isn’t that important.

Me heading to sleep after a 13 hour work day of dancing in heals and 3 hours of sleep. I would never dream to say I don’t love what I do, but girl... I’m le tired 💤

Do you think guys can benefit from dance as well?

Oh absolutely! My son actually watches the shows with me when I’m doing my homework to recap. He’s so obsessed with watching the B-boys, and he’s always like, “I want to go take those classes and do that!” We’ve actually had some difficulty scheduling some men to come in and interview. So far it’s been mostly girls that I’ve had come in to interview with us, and I’m like, what is this? Why are we not getting guys? I don’t want the market to think that this is a female driven show, because it’s not, but we’ve actually gotten some good male guests now. We’ve got Kenny Wormald, who co-owns The Playground. I wanted to get talent that is going to inspire people, so we’ll give our listeners a lot of good content from males as well.

What are some dance shows or movies that you’d recommend?

I would recommend a show on Netflix called Dancing Queens. It’s a story about drag queen Alyssa Edwards, aka Justin Dwayne Lee Johnson, who was previously on Rupaul’s Drag Race. It’s his life story and about him being an owner of a dance studio back in Mesquite, Texas, and it’s so good. They do like “Glee moments” where he’ll have a job or a gig, but then they’ll shoot it like it’s an actual music video, so it’s like you’re watching a drag performance on TV. It’s super fun!

I know you get asked this all the time, but I have to ask: can you tease a Glee revival?

I’d love to, it’d be super fun, but it was such a hard show to do. I’m not sure if we would get the funding. I feel like it’s kind of too soon, because it only got off the air like three years ago. It would be cool though if HBO could pick it up and it was like a darker version of what Glee really is.