Look, 2020 was a terrifying year for so many reasons. However, back in October 2020, there was a rare bright spot amidst the chaos. In a time of darkness and pestilence, one oversized Halloween decoration towered over the landscape and gave us the lighthearted viral moment we needed. In the process, our giant friend became a symbol of the year from hell.

We’re, of course, talking about the iconic 12-Foot Giant Skeleton Man from The Home Depot, whose gigantic, looming presence blended right in with a holiday season that looked nothing like the years that preceded it. After pictures of the 12-Foot Giant Skeleton went viral, the decoration quickly sold out around the country.

Normalize the giant skeleton as a decoration for the seasons.

I can’t stop thinking about the 12 foot tall giant skeleton from home depot… like imagine seeing that creeping around the corner of your house as you walk home one night, the fear that sinks into your bones as it makes eye contact with you and watches your every move until pic.twitter.com/fnebB71jv7

Now, we’re happy to confirm that he’s officially coming back for another year of spooky, scary vibes, and he’s brought another friend from the dark side with him.

The Home Depot’s Giant 12-Foot Skeleton is officially on sale, so jump on it because he’s sure to sell out fast. Last year, the giant Home Depot skeleton was priced at $299, and the price will remain the same this year. 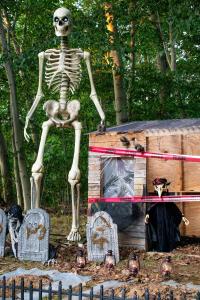 In addition, The Home Depot also just announced a new, upgraded version of the classic Giant Skeleton complete with a fiery inferno chest, pumpkin head and creepy spindly fingers. Both of these spooky Halloween decorations come with the addition of an AC power adapter so you can plug them in and keep them running for weeks at a time.

This giant skeleton is similar to the classic viral decoration, with a few gory updates. The Inferno Pumpkin Skeleton will also be slightly more expensive, with a price tag of $349 instead of $299. 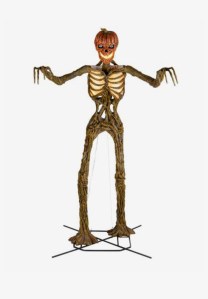 We got a chance to sit down with The Home Depot’s Decorative Holiday Merchant Lance Allen, and discuss the 12 foot Giant-Sized Skeleton, or as they refer to him, “Skelly.”

When asked why he thought the giant skeleton made such a splash last year, he noted that “With most people at home during the 2020 Halloween season, the sight of the 12 ft Giant-Sized Skeleton brought a smile to people’s faces when they needed it the most, in addition to absolutely wowing them.”

“It was such a statement piece for the Halloween enthusiasts who weren’t afraid to go the extra mile. The Home Depot was also the leader in bringing this type of unique innovation to consumers, so it was a new way to decorate that no one had seen in the category before.”

I also asked him why they decided to create a new, updated, redesigned version of the gargantuan skeleton piece, he explained that “There was such excitement around the 12 ft Giant-Sized Skeleton last year, and people were using it for various holidays besides Halloween, so we thought we would bring it back! The original has so many fans and we didn’t want to change it, but we knew from a design and innovation standpoint, that we had to take it to the next level and create a new piece.” Hence, the inferno chest and giant pumpkin head.

I asked him what Spy readers and The Home Depot customers should know about this new, upgraded Skelly. He noted that “This year’s new 12 ft Giant-Sized Inferno Pumpkin Skeleton has LifeEyes™ LED eyes to illuminate the fire within him. We also integrated LED light panels into the chest and mouth to really show who the king of the rotten pumpkin patch is. We also wanted to give customers the flexibility to design two unique scenes with different pieces – Grave and Bones and Rotten Patch.” The Grave and Bones being the old Skelly, and Rotten patch being his new, gourd-adonned friend.

“We put a lot of thought into our design and we think our lineup is innovative, fun, and quite spooky. Our goal is to always offer memorable, show-stopping pieces and The Home Depot is leading the market in innovation. We can’t wait to see what creative things people do with our décor this Halloween season and beyond!” said Lance.

He’s a Big Boy: How To Get the 12-Foot-Tall Home Depot Skeleton With Glowing Eyes