If you’re a fan of Ted Lasso, European football, or have a soft spot for underdog sports stories, then we have the perfect weekend watch for you. Amazon’s Prime Video just released a brand new docu-series all about the inner workings of Arsenal F.C., the professional football club based in London, and it looks like the best Ted Lasso reality show we could’ve imagined. All Prime Video members can now stream the first three episodes on Amazon’s website, and non-Prime Video members can start a 30-day free trial and watch them free of charge.

Keep scrolling to find out how to watch All or Nothing: Arsenal for free this weekend. If you’re on the fence, we’ve also got some excellent reasons to tune into this new sports drama.

What Is All or Nothing: Arsenal?

Arsenal F.C. is one of the biggest and most legendary football clubs in the world, located in the Islington neighborhood of north London. If you’ve ever been curious about how a European soccer team functions on the inside, on and off the pitch, now’s your chance to find out.

All or Nothing: Arsenal is a show from Amazon Studios that follows Arsenal F.C. and their coach, Mikel Arteta, throughout an entire season as the fight to get into the elite Champions League. The series takes you behind the scenes at Emirates Stadium and London Colney. The team is hoping to secure a top-four spot in the Premier League, and hopefully a return to the highest levels of European football. Along the way, viewers will get an inside look at the trials and tribulations the team, and each individual, faces.

The show gives everyone from superfans to casual observers unprecedented access to the players, staff and coaches of the team, showing the highs and lows that come with a highly intense and emotional season.

It really is like a real-life Ted Lasso (without the charming, fish-out-of-water American), and if you’re a soccer fan or fell in love with the raw passion in that fictionalized version, you’ll definitely want to check out the real thing.

How to Watch All or Nothing: Arsenal

As of August 4, the first three episodes of the series are now available to stream via Prime Video, and they will be releasing new episodes on the following schedule:

All current Prime Video members have instant access to the series and can watch it through the link below.

Watch All or Nothing: Arsenal

What If I’m Not a Prime Member?

If you’re not a Prime Video member, you can still start a 30-day free trial of Prime Video and watch the entire series for free. After 30 days, you’ll be charged $14.99 per month plus any additional taxes for continued access to Prime Video’s entire streaming library. 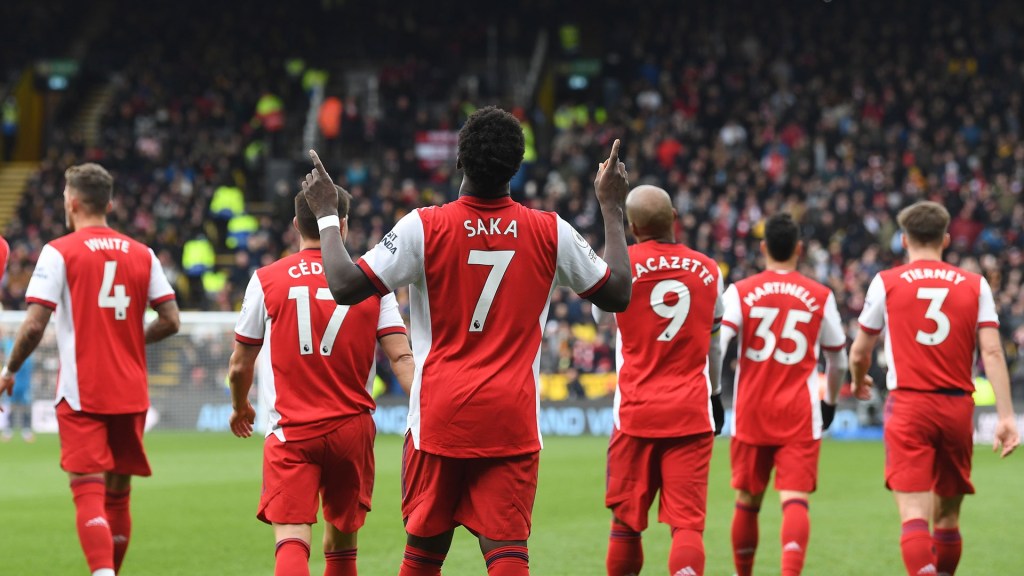 Why You Should Watch All or Nothing: Arsenal

Not sure if you’re ready to trade American football for European football? There are a few excellent reasons to tune in, even if you’re not already a die-hard soccer fan.

European Football Has Never Been Bigger (in the U.S.)

First, European football is having a major cultural moment in the United States. We’ve already mentioned the popular TV series Ted Lasso, but that’s not the only series making Americans fall in love with soccer. Later this month, Ryan Reynolds and Rob McElhenney will star in Welcome to Wrexham on FX, a documentary about the American comedians becoming the owners of a down-and-out English football club.

The U.S. Women’s National Soccer Team continues to dominate every major competition they step their cleats into, and with the launch of the celeb-backed Angel F.C. soccer team in Los Angeles, there’s more buzz about soccer in the States than ever before.

Plus, the next World Cup is happening in November. If you can’t wait, this show will scratch your itch.

Everyone Loves an Underdog

Inspiring, dramatic, raw depictions of underdog sports stories have always been popular for a reason: the highs are high and the lows are low, making them endlessly entertaining the watch. Recently, we’ve seen an uptick in the amount of “football”-specific underdog stories. If you’re a fan of European soccer this is a can’t-miss series to watch this weekend. If you’re a sucker for a good sports story, this real-life reality version is sure to peak your interest.

We also all know what it feels like to root for a team that perpetually betrays you, disappoints you and loses, despite even the most hopeful odds. This show depicts that experience for Arsenal fans, and gives us all catharsis for the times our favorite teams could seemingly do nothing but lose, badly.

Mikel Arteta Is a Fascinating Character…

The team’s manager is deeply tested during the rough start to the season, as in a soccer-obsessed region like the U.K. (as we’ve seen playfully depicted in Ted Lasso) that usually means folks calling for your head. In one scene he’s seen rousing the troops in the locker room with a story about his childhood open heart surgery, essentially saying the players need to summon the courage and dedication of a surgeon when a child’s life is on the line. It’s touching, yet clearly a bit of a stretch for some of the athletes in the room.

Without giving too much else away, Arteta’s occasionally confusing ramblings in front of the team do transition into real acts of leadership, and you find yourself rooting for him along with the rest of the squad in desperate moments.

We Could All Use a Pep Talk

Let’s be honest, the experience of being in the world has felt like the start of a losing season for the past few years. With nightmare after nightmare happening in the news, it’s felt overwhelming and almost impossible to keep your head above water. Mikel Arteta’s pep talks to the team carry real heart to them, and some of the show’s deepest moments zero in on those intimate moments in the locker room fans rarely get to see. Even if the score of the game doesn’t deliver, you can’t deny the heart, and we could all use some of that now.

Watch All or Nothing: Arsenal