Ah, Jenga. A childhood classic. Probably your first ever experience with anxiety happened a solid 5 minutes into this tower-toppling game, sweat dripping down your 7-year-old forehead, heart beating out of your chest, just because you’re pulling a block out from between a number of other wooden blocks. Oh, the memories.

Now that you’re much older, you occasionally reminisce on Jenga nights with friends and family as a kid, wondering if there’s a way you can bring those childhood moments into your adulthood. Well, if you’re a sucker for a cold one with the boys, we’re here to tell you that you can. Introducing Jenga drinking games. You’ve probably heard of this popular game once or twice but have been too lazy to make a Target run just to snag a set yourself. But if you find yourself in an Airbnb with its own Jenga set, and if you have some booze on hand, then you already have everything you need to enjoy drunk Jenga.

The drunk Jenga drinking game is pretty straightforward and it’s quite literally one of the best drinking games we’ve ever played. You take any old Jenga set laying around the house, grab a couple of permanent markers and tattoo each wooden block with a task the player will have to do when they pull the block. Feel free to make the block look as mundane or as pretty as you’d like, it’s totally up to you. Each block is placed on the tower face down so players aren’t able to see the task before they pull it, making it that much more exciting. All in all, this game is primarily meant to turn one of your go-to games as a child into one of the best adult games for grown-up fun.

Don’t have Jenga? Get it here: 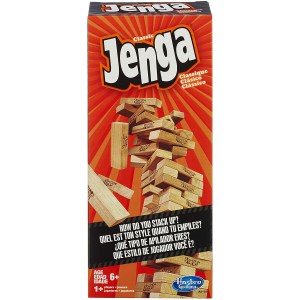 Tasks can range from just about anything you want. We suggest that before playing, grab some like-minded friends to write on a couple of blocks, too, so they aren’t only your ideas. Here are a couple of our favorite Jenga drinking game ideas to get you started: 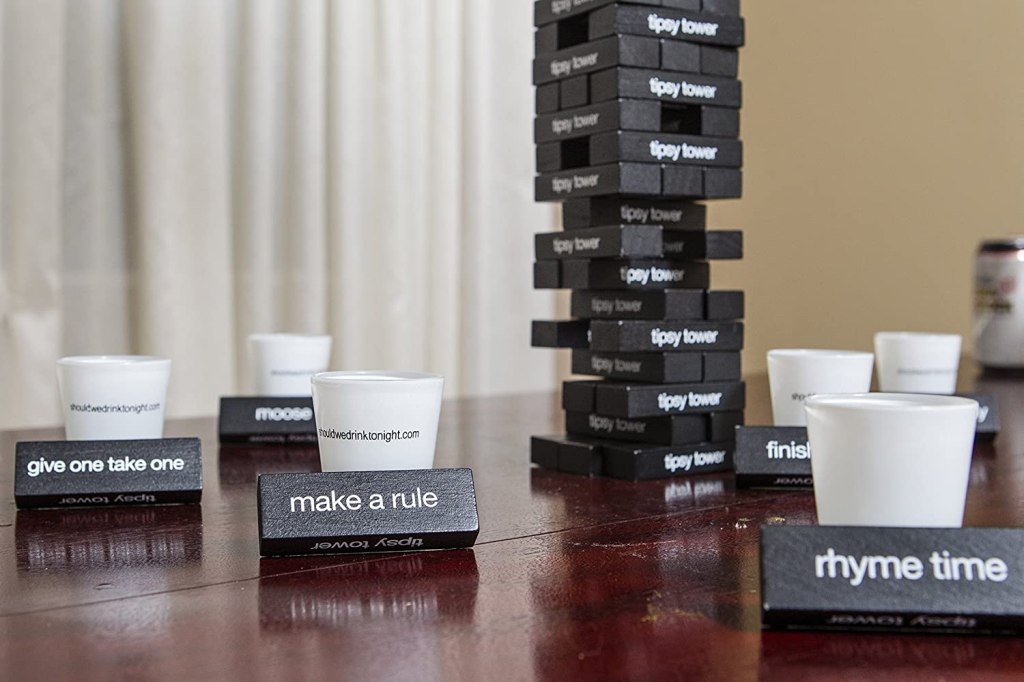 Drinks don’t necessarily matter either, but it is almost promised you’re going to need some hard stuff to take a couple of shots throughout the game. Whether you’re slugging from a bottle of one of the best whiskey brands money can buy or you and your friends are more into the world of the best cheap vodka under $25, you’re pretty much all set with any liquor bottle.

You can also try to make the game even more exciting by taking it to the next level with a massive Jenga set instead. Because why not? 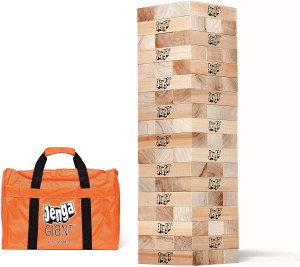 At this point, we know what you might be thinking. “Writer at SPY.com, I’m lazy, I don’t want to write a bunch of my own rules on my Jenga set.” That’s fine, we get it.

We also have to mention that you should absolutely be drinking responsibly. Do NOT drink and drive under any circumstances. It’s 2022, we have more ride-sharing service options than we can count on our fingers. Don’t drink if you’re pregnant, because, duh. And lastly, don’t be an idiot. Here in the United States, drinking culture is often synonymous with binge drinking, and there are better, safer ways to enjoy alcohol.

Now, there are a number of different Jenga-like games (not owned by the Jenga brand) that have pre-printed drinking rules and regulations scattered about. Here are a couple of our favorite drunk Jenga games to get you started.

Tipsy Tower is the best Jenga drinking game not actually owned by Jenga, and you can find it on Amazon. Out of all other Jenga drinking games, it has the best reviews we’ve seen, so we’re sure you’ll have a blast. Tasks include double drinking, skipping turns, give a drink to take a drink and more. 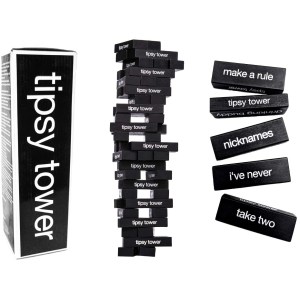 Buzzed Blocks is Jenga drinking game just like the one we listed prior but with a couple of different rules. This is a great one to play at birthday parties, bachelor parties and more. With 54 blocks total with only 40 including rules, players get 14 additional blocks to write in their own. 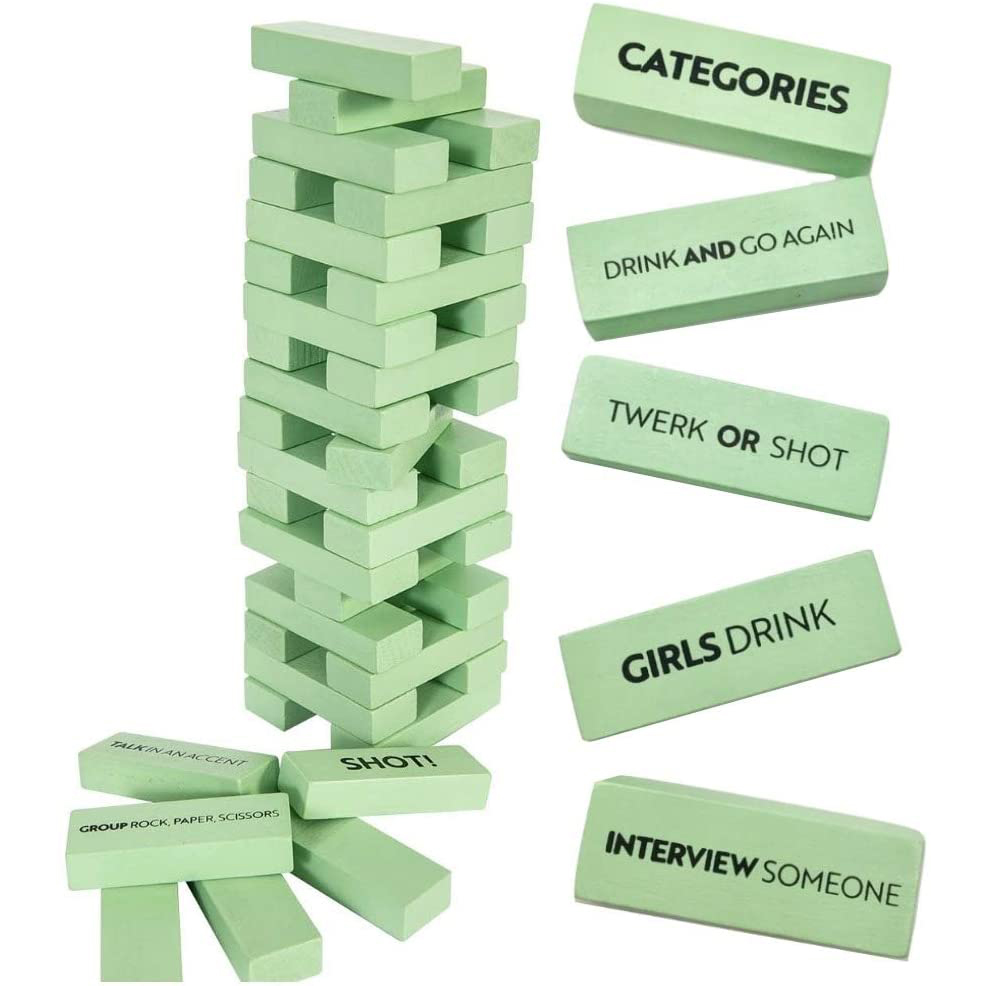 With 60 blocks total, this is one of the tallest towers on our list. It comes with four glasses to help you and your pals get tipsy as the tower topples with a number of different tasks listed on each wooden block. Let’s get sipping! 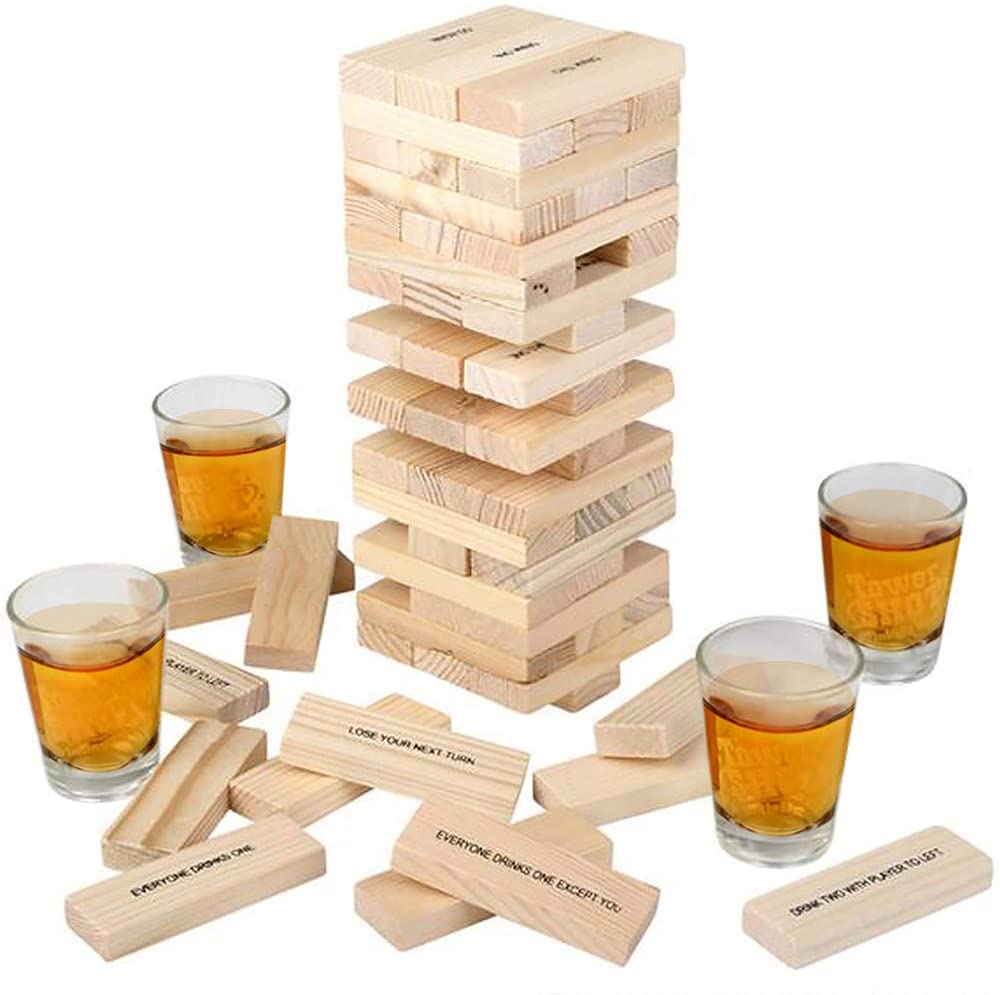 Lastly, we love this one because it comes with a little something extra: four shot glasses for a fun time. Each block has a hilarious task as expected, so we’re sure you’ll love it. 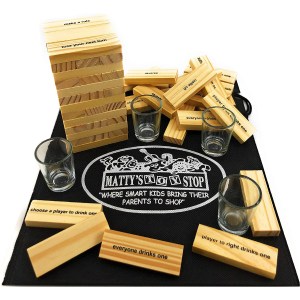 Play under a black light. We dare you. This glowy version of your favorite drunk Jenga game adds a pop of color to any dim-lit room. There are 54 blocks in total for hours of fun — or at least a few minutes before the tower topples. Add a black light to enhance your experience and play in the (almost) dark! 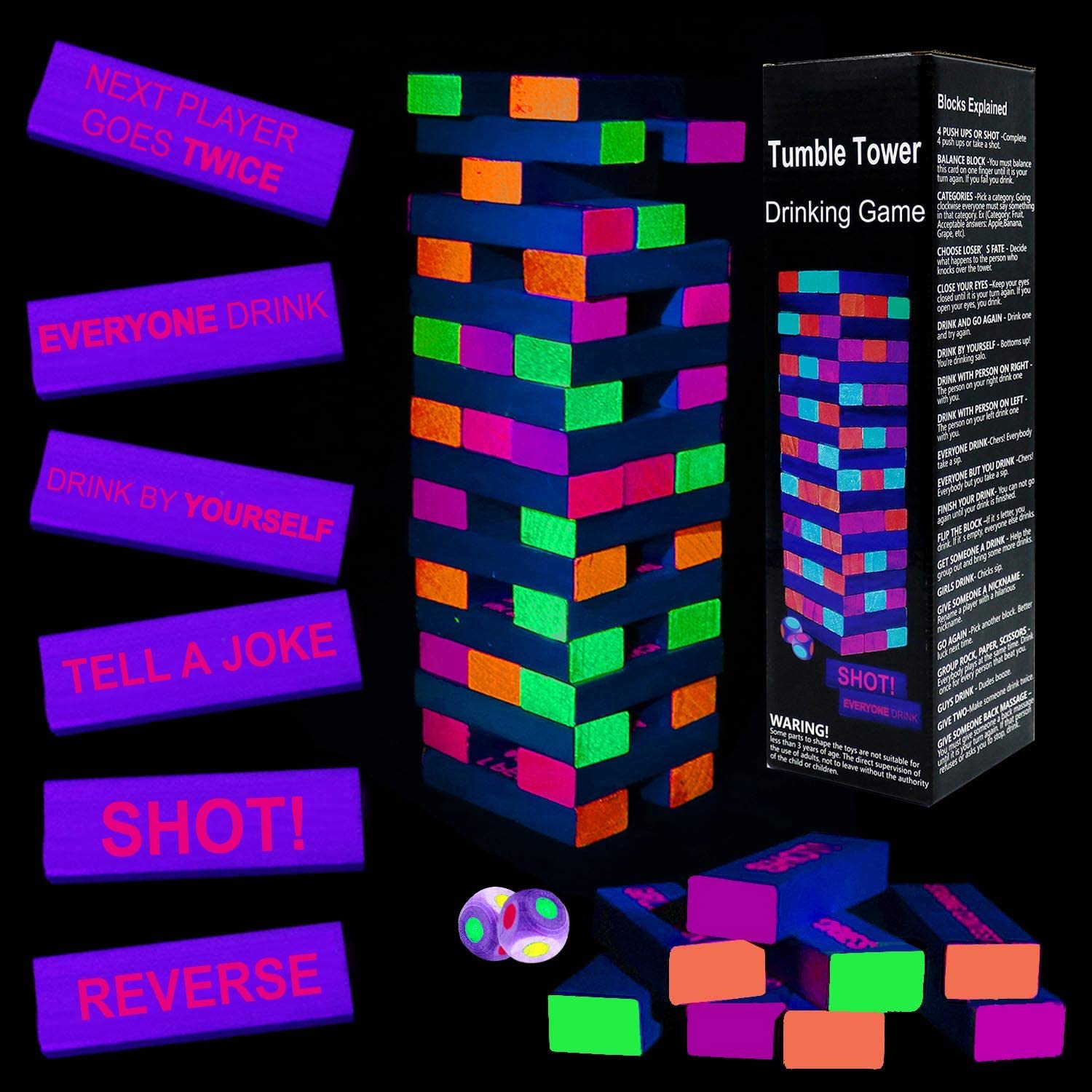