If you’re a Kansas City Chiefs fan, you’re probably gearing up for another Super Bowl win on Sunday, February 7th 2021. Sunday after next, Patrick Mahomes will hopefully again lead his team to victory against the Tampa Bay Buccaneers, and make the Chiefs back to back Super Bowl champs. From the moment the Chiefs clinched the AFC championship by defeating the Green Bay Packers, the most die-hard Chiefs fans have been eagerly awaiting this moment. Prior to last year, the Chiefs hadn’t made it to the Super Bowl in 50 years, when they beat the Minnesota Vikings in Super Bowl IV. Now, Kansas City fans — it’s time to gear up so you can cheer on your team in style.

Where can fans find the best Kansas City Chiefs Super Bowl merchandise? Seconds after the Chiefs clinched their Super Bowl title last year, lots of officially licensed Super Bowl gear went on sale. Because they’re a popular, successful team there’s plenty of gear out there that ranges from official and more pricey, to knock-off and affordable, and sports the team’s colors nonetheless.

This shirt commemorates all of the names of the Chiefs players who are on their way to the Super Bowl this year — it’s an officially licensed piece of gear so you know you’ll be wearing something legit on the day of the game. It has the Kansas City Chiefs logo on the front as well as the “Super Bowl LV” label that you’ll be able to look back on years from now, especially since it’s a historic game after an unprecedented 2020 season. It also has the Kansas City Chiefs logo, and is decked out with bright team colors. 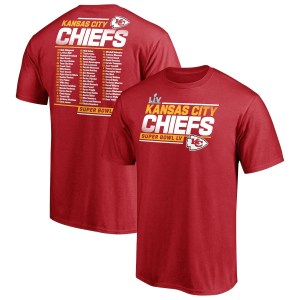 This officially licensed Patrick Mahomes jersey is not cheap, but it’s the perfect thing to wear to show your team spirit on Super Bowl Sunday, and it’s got the official Super Bowl LV patch on the shoulder so you can save it for years to come. It’s also made by Nike so the colors are bright and quality superb, and since it’s a special event item you have guaranteed shipping by February 4th so you can wear it for the big game. 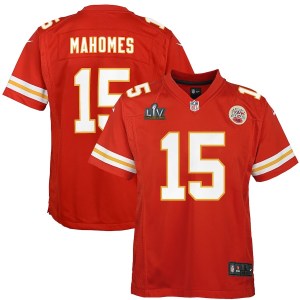 Every game starts with a coin toss to determine ball possession, so why not collect this official game flip coin to commemorate this historic match-up? It’s old vs. new, Tom Brady vs. Patrick Mahomes — and I’m pretty excited to see who wins out. This is an officially licensed piece of gear made by Highland Mint that features bold graphics from both teams. 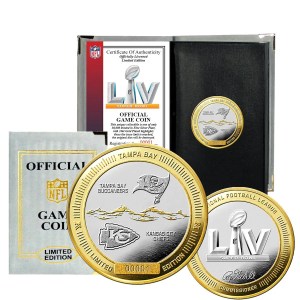 This snapback is another, simple way to sport your support for both teams during the final matchup of this historic, unprecedented NFL season. This hat includes both team’s logos, the Super Bowl LV logo and is an official 9FORTY hat so you know it’ll last you well after game day. This item also falls under the “special event” category for shipping, so you know it’ll get to you just in time for the big game. 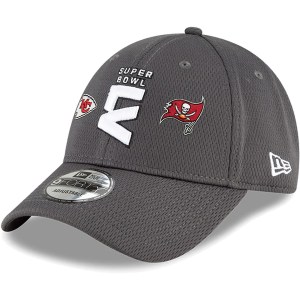 If you want to relive the Chiefs Super Bowl win from last year, the DVD is available to order as a pregame for the viewing of this year’s game. This official Super Bowl LIV DVD and Blu-Ray combo includes highlights from the game and extra footage from the Chief’s big win, which makes it the perfect gift or piece of Super Bowl merchandise for any loyal fan. Watch as Andy Reid, aka Big Red, leads his team to victory. 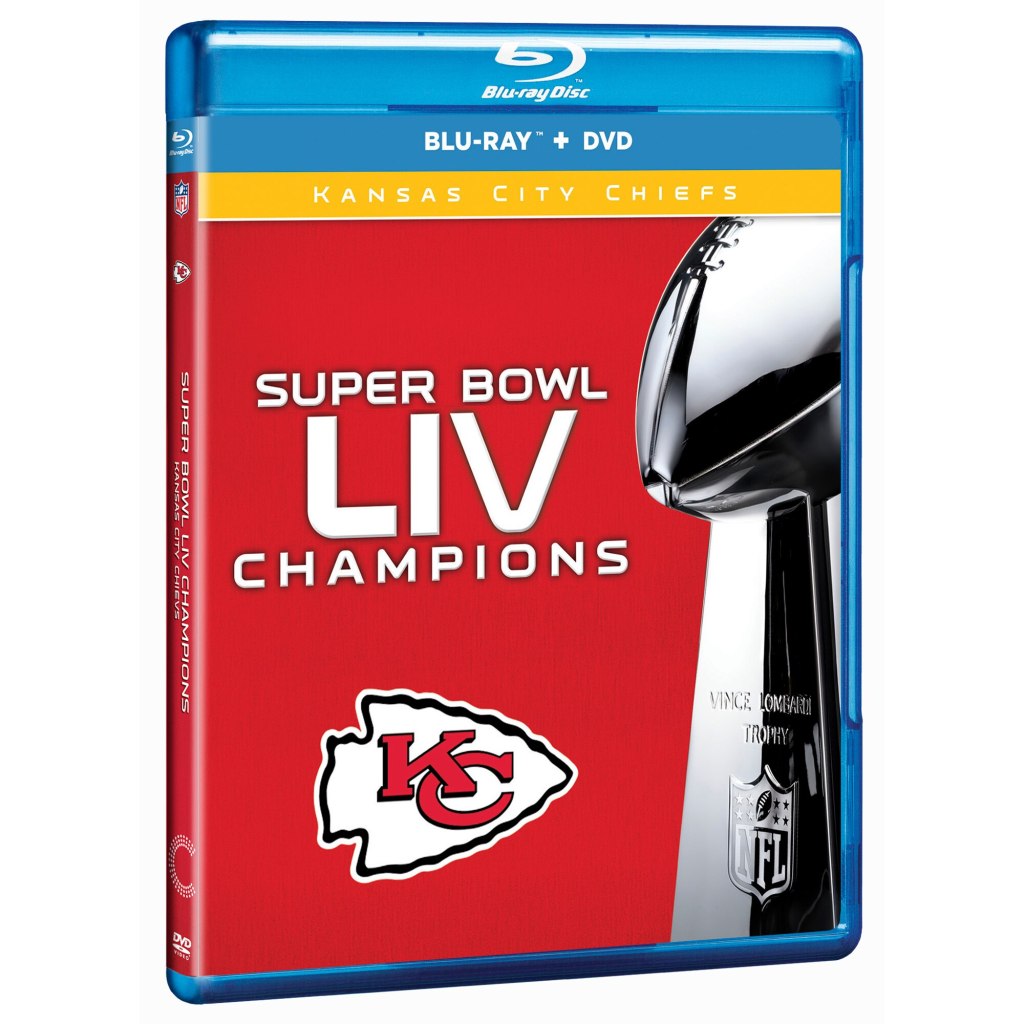 If you’re starting from zero when it comes to KC merch, then start with this basic t-shirt in Kansas City red with the arrowhead KC logo boldly printed across the front. The T-shirt is affordable and re-wearable, and it’s a great pick if you’re shopping for your entire Chiefs-loving family. But despite the low price tag, you’re still getting a quality piece of fan gear. 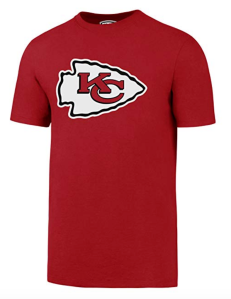 With sizes from small to 5XL, this Kansas City Chiefs long sleeve t-shirt is a limited edition item that’s perfect for your Super Bowl party. Bearing the words “Super Bowl LIV” and “CHIEFS”, this 100% cotton printed t-shirt is officially licensed. Show off your team pride and celebrate this historic occasion with your favorite new t-shirt. 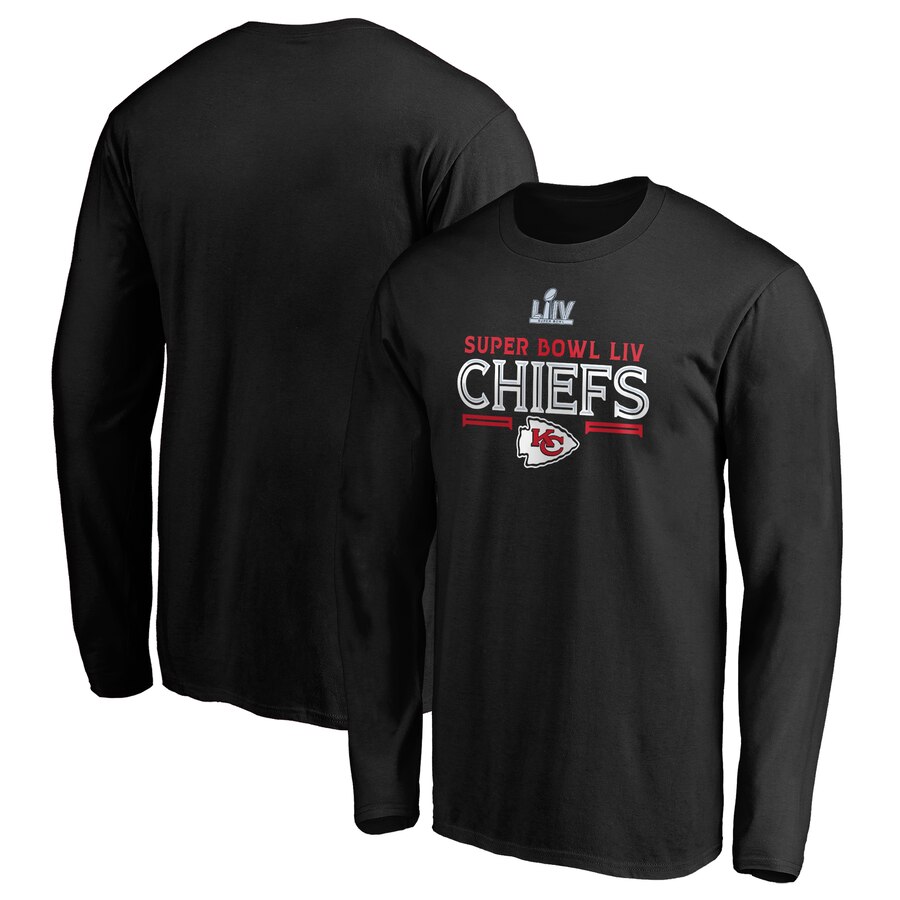 These KC Ziplock bags offer a way to inject some Chiefs spirit into every detail of your Super Bowl party or tailgate party. The gallon-sized bags feature the Chief’s logo across one side. Use them on the big day as disposable bowls for chips or snacks, or use them to put away leftovers from your Super Bowl party. Then, the day after (when the Chiefs are the champs), you’ll be reminded of the victory when you break out the leftovers. You can also use these bags as party favor bags, letting your guests take home leftover goodies to celebrate the Chief’s inevitable victory. 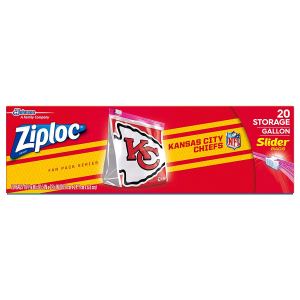 If you’ve got a young football-er who’s watching the game and dreaming about their future in the league, this pair of gloves will help them get there. They’re official NFL gloves licensed by the league with authentic team logos, like the Kansas City Chiefs. The silicone palm makes snatching the ball out of the air a breeze and the neoprene wrap wrist closure makes sure the fit is tight and comfortable all game. 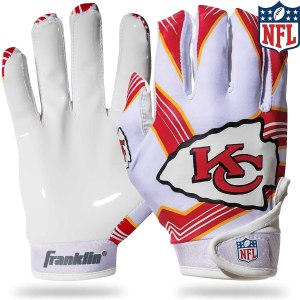 The Super Bowl is a sacred day for any real fans of the two competing teams… but it’s also a day when bandwagoners come out to enjoy the festivities. This Kansas City trivia game separates the die-hard fans from the fakers. It includes 125 cards with 500 questions about all KC sports (but mainly the Chiefs and Royals). You can quiz your friends and family while sitting around, or play an easy game of “race to 21.” 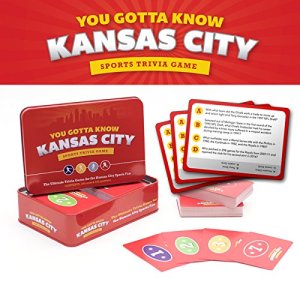 Most Super Bowl viewers will be holding a drink of some kind while watching the game, which is why this Chiefs tumbler is a great idea. It’s has a two-layer design to keep drinks at the proper temperature and reduce condensation, plus a solid BPA-free, microwave-safe plastic construction. At 24 oz. it’s big enough for a tall glass of ice tea, a hefty beer, or, if you’re hosting that kind of Super Bowl party, a mega margarita. 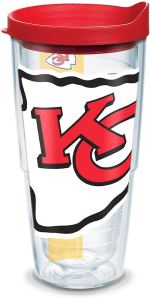 Another cold-weather essential for Super Bowl Sunday is a good team cap. This one from New Era does a great job of keeping your noggin warm while boldly representing your team thanks to the bright red color and Chiefs logo on the front. It has a cuffed design to accent your outfit, so you’ll be set if you’re (hopefully) watching the game outside with friends rather than in a crowded bar. 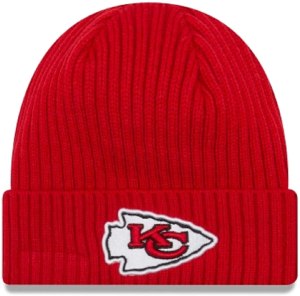 The one phrase that will stick in your mind as forever as tied to 2020? Face covering. So, naturally, this year Super Bowl gear includes face coverings with the Super Bowl LV logo on the side. THIS is a historic piece of gear that you should consider getting, even if you’re watching the game at home. Years into the future, this face mask will remind us of everything we went through last year, and that certain things prevailed — like football. Grab this officially licensed piece of gear from the NFL shop and keep you and others safe while supporting the Chiefs. 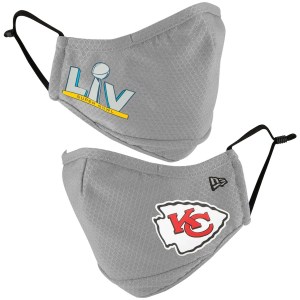 Need someone to watch the game with in quarantine? Why not create your own mini Chiefs player out of Blocks? This little figurine is made of 90 blocks total and features accurate team colors, as well as a little green to stand on. This is a great gift for kids you’re watching the game with so they don’t get bored, or diehard Chiefs fans who want to collect every piece of gear possible. 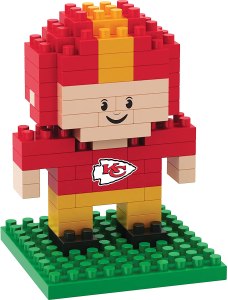 Slides are useful no matter who you are or where you live. Need some shoes to rock in your communal shower at college? Or quick slip-ons to get the mail in? Yup, we thought so. Why not sport your favorite team at the same time? These have the bold Chiefs team logo on the footbed and clearly display the team name on either foot. The adjustable strap is padded for support and reinforced so they’ll stay on your feet. 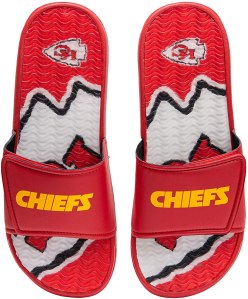