If you’ve never played a good game of the widely popular, extremely vulgar Cards Against Humanity, you’re probably living under a rock. What’s it like down there? Say hi to the bugs for us.

The beloved adult card game took the party game world by storm, borrowing ideas from the G-rated, straightforward game of Apples to Apples and dirtying it up times a thousand. For real, this game is RAUNCHY. With answer cards ranging from “a giant powdery manbaby” to “the wrath of Vladimir Putin” and almost every other controversial short blurb you can think of in between, this eye-widening game is an awesome party play. With all that being said, the game is clearly not for kids.

Fortunately, fans of Cards Against Humanity now have a kid-friendly alternative — Kids Against Maturity 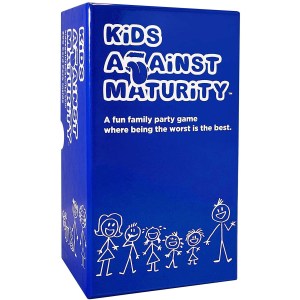 Now, don’t think to yourself that this is just another game for kids that you’ll have to pretend you like. This isn’t the Paw Patrol Pop-Up Game, even though that game does, in fact, slap. Kids Against Maturity truly combines the best of both worlds by offering that classic poopy chatter children seemingly can’t get enough off, while suggesting deeper innuendos for the adults playing the game. Like the card “turkey baster”. Come on. It’s a win-win for all who play.

Get those kids off their screens and enjoy family fun again at home, the beach, the park — wherever. Sold on Amazon for only $30 and with a couple of expansion packs all just under $15, you’ll be glad you made the purchase.

The 16 Best Adult Games for Your Next Game Night