LEGO makes some pretty awesome building sets for adults and children alike. Whether it’s robotic toys, car sets or the latest characters from the Star Wars franchise — you can make nearly anything out of LEGOs these days. That list now includes an entire map of the globe, which you can construct with a whopping 11,000 pieces in their newly released set that’s also the largest one they’ve ever created. 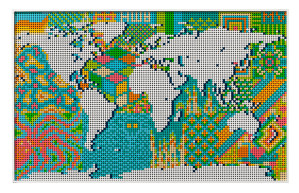 The set is 11,695 pieces, to be exact, and displays a map of all seven continents of the globe once you’re finished. You can make currents in the ocean with an included color map and track your travels on the map as well. Not only is it a great activity and mental puzzle but when you’re done you can hang it on your wall and use it as a souvenir.

The set also comes with a custom soundtrack you can listen to while you build, and there’s plenty of pieces to go around which opens up the door to building with a friend or family member.

The set, despite its large size, is designed to be a mindful, calming activity as you map out the world with bright, fun colors. De-stress and plan your future, post-pandemic travel adventures on LEGO’s largest set ever.

The Best LEGO Sets for Adults, Because Grown-Ups Need Toys, Too