While 2020 wasn’t the greatest year for superhero movies due to obvious reasons, in 2021, superheroes are more supercharged than ever. After falling in love with WandaVision earlier this year on Disney Plus, we’re anticipating a slew of superhero movies through the rest of the year and into 2022. With a new Suicide Squad and the long-anticipated Spider-Man 3 this year plus The Batman, Black Panther: Wakanda Forever, Thor: Love and Thunder, The Flash and more in 2022, we’re way too excited for the next few years of superhero movies.

The hype has gone nowhere.

If you’re trying to figure out a killer Halloween costume for 2021 to participate in a Halloween costume contest, superhero outfits are bulletproof (yes, even if you’re a grown-up). Not only are high-quality superhero costumes easy to find online, but also they’re highly recognizable.

Whether you’re a die-hard DC nerd, a Marvel geek, or a fan of the films, there’s a superhero costume for you. Below are some of our favorite adult superhero costumes that you can order right now. Just be sure to buy these quickly, as they sell out fast.

WandaVision took the world by storm during the height of the pandemic as one of the highest-rated television shows in the past year. With that said, one of the most current and exciting new superhero costumes for men this year is none other than Vision himself. This costume’s got everything you need to hit the nail on the head. Well, minus the red paint. You’re going to have to snag that on Amazon.

As God of Mischief and brother to Thor, Loki is known for being quite the savage within the Marvel universe. He’s got a desire for power and uses schemes to get what he wants. Kind of beastly, if we do say so. For this costume, there’s not much you have to do aside from throw on this costume to get the point across. Maybe a wig will suit you well, too. 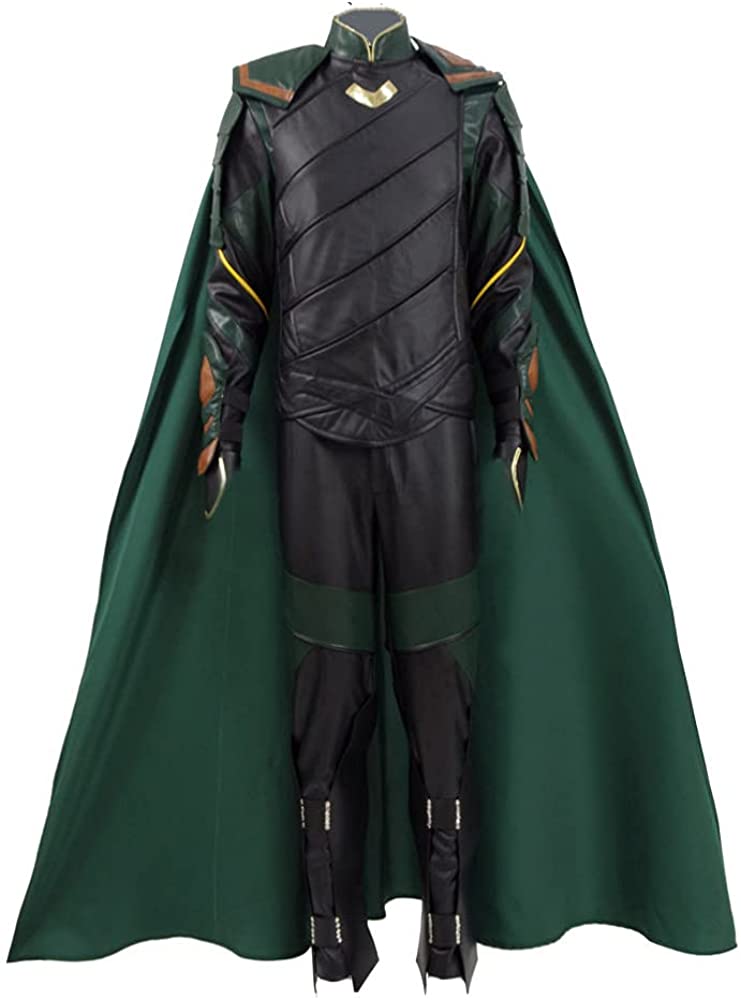 The Dark Knight is another classic superhero Halloween getup, but this one isn’t the run-of-the-mill costume that kids are wearing. It’s a deluxe suit with a rubber utility belt and a hooded cape that turns you into Batman — no childhood trauma required. Best part? This costume comes in multiple sizes, unlike most one-size0=its-all options. 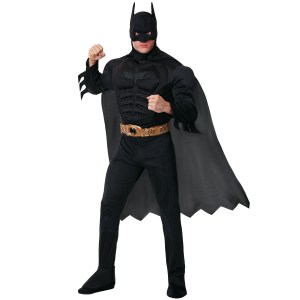 Black Panther added some much-needed diversity to the superhero world and simultaneously crushed box-office expectations in 2018. It’s still a highly relevant costume idea, and with Black Panther 2 coming out in 2022, you can hold onto the costume for a while. We like this one because it comes with muscle padding in the jumpsuit (most of us don’t look like the late and great Chadwick Boseman, unfortunately), gloves and a mask for just over $50. 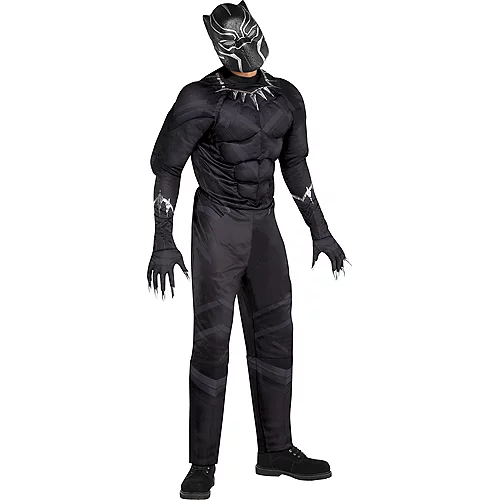 Spider-Man is on its way back to theaters yet again with Tom Holland at the end of 2021. This costume lets you feel like the string-slinging superhero thanks to high-quality material and vivid graphics. It boasts over 400 reviews and 4.6 stars on Amazon, so you can buy assured that it fits well and looks authentic.

There are some new rumors that one of the funniest superheroes around is coming back in 2022 or 2023. Yup, Deadpool. If you want to dress up like the sarcastic, twisted mutant, you’re in luck. This full Deadpool costume costs just $30 and comes very highly-rated by customers. It’s high-quality and fits very well (although you should have some safety pins on deck, just in case). 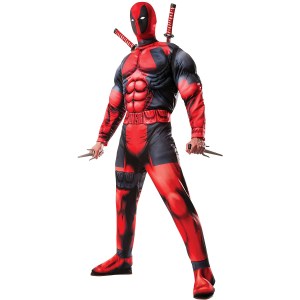 Superman might not necessarily be in the spotlight right now, but he’s too iconic to forget when picking a superhero costume. If you decide to go with the most classic superhero, we recommend the most classic of them all. It fits well, looks great and stands out in any crowd. And best of all? This costume is truly timeless. 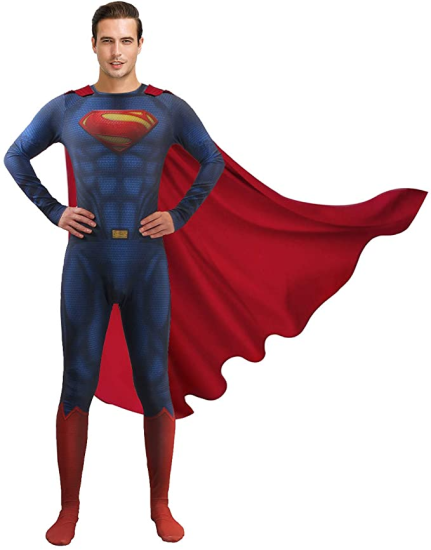 With a new Aquaman movie on the horizon in 2022, there’s no better time than now to rock the classic scale-covered costume. With a golden top and a green bottom, this costume totally mimics what you’re going to be seeing in the newest flick. All you’ll need is a trident.

Despite the fact that the Green Lantern movie from 2011 with Ryan Reynolds wasn’t exactly a masterpiece, the actual superhero Green Lantern is still a badass. This costume almost does him justice, complete with a muscle chest jumpsuit with boot tops attached and an eye mask.

This is a super affordable option for a superhero costume that’ll come just in time for Halloween. One size fits most, but it also comes in an XL option for those who don’t fall into the standard size category. It’s modeled after Barry Allen’s iconic look from The Flash TV series. It’ll help you break the speed barrier and look like you’re moving faster than the eye can see. 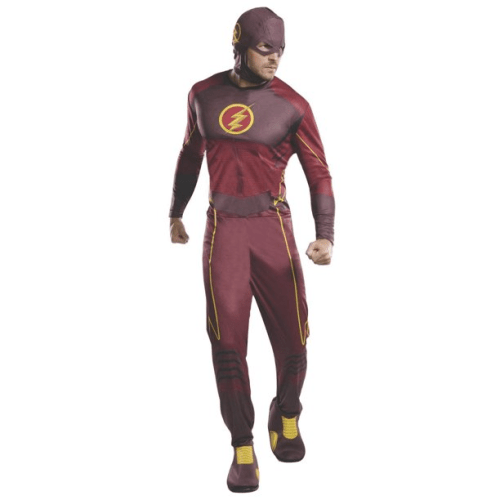 Although there’s technically no leader of the Avengers, we all know that Tony is basically the head-honcho. Iron Man is a no-brainer Halloween costume even in 2021, and you have a few variations that are all equally fun. This full-body, second-skin jumpsuit is also one of the more comfortable options when it comes to superhero Halloween costumes. 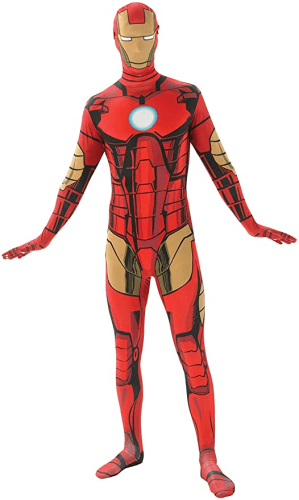 For a slightly less typical superhero costume, try going to the party as Star-Lord. Most people will still recognize the leader of the Guardians of the Galaxy played by Chris Pratt, but it’s not as obvious as Iron Man or Batman. This costume comes with a mask and jumpsuit, but you can also pick up Star-Lord’s pistol to really complete the look. 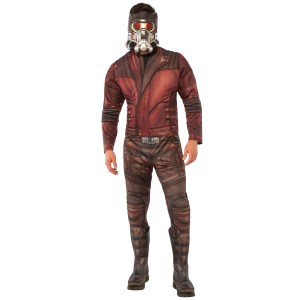 Though we saw the last installment of the Wolverine trilogy with Logan in 2017, this old-school Wolverine look can’t go unrecognized. The classic electric yellow and royal blue mixture exudes serious comic book energy that we just can’t pass up. Because Wolverine is generally a lesser-worn costume most of the time, you’ll definitely stand out from the crowd in this superhero choice. 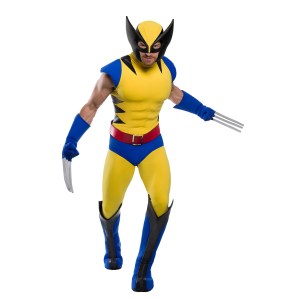 If you were a fan of Teen Titans growing up, you’ll absolutely know who Beast Boy is. Though the character hasn’t had really any break out at all aside from the cartoon, he’s still a stellar and fun to watch superhero who deserves recognition in a Halloween costume. You’re going to need to get yourself some green skin paint separately though, and we can’t promise any shapeshifting powers come with this costume. Unless you have a hidden power yourself, that is. 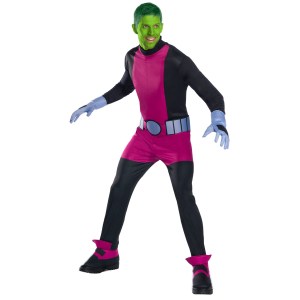 While we anticipate the next Flash installment to release at some point in 2022, get ahead of the game with this Flash costume to wear each Halloween or costume party until then. This jumpsuit is attractive for its added chest and abdominal muscles we definitely don’t have because of quarantine and tops itself off with a helmet and chin strap to fit the Flash vibe. All we recommend, don’t try running too fast in this, you won’t want to rip it. 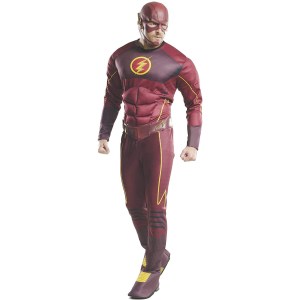 After The Incredibles 2 in 2018, the two-film series is now a two-generation franchise. Not to get you excited for no reason, but we’re also hearing some rumors about a third installment coming in a few years. We like the idea of dressing up as Mr. Incredible because it’s not as common as other superheroes but it’s just as fun. For best results, grab a blond wig to mimic Mr. Incredible’s incredible ‘do. 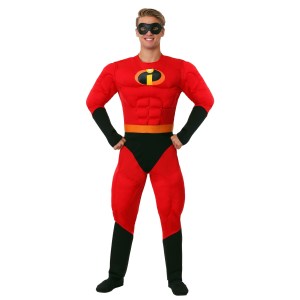 This may be the most timely costume of all. The Joker starring ‎Joaquin Phoenix hit theaters a few years back so everyone will instantly recognize what character you’re going for. If you’re going to dress as the psychopathic clown, have the best costume on the block with this outfit from Grand Heritage. The costume comes with separate pieces of clothing, a wig and even a special makeup kit for nailing that spooky smile. 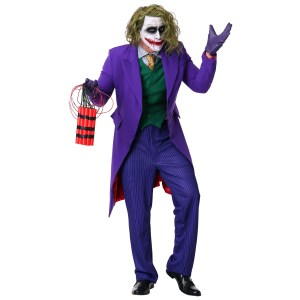 Feel like going the fun, classic superhero route? Teenage Mutant Ninja Turtles may be the way to go, and this is one of the best costumes around. It includes a jumpsuit with muscle-stuffed arms and chest, an eye mask, elbow pads, knee pads, shoe covers and a shell — everything you need to be the most authentic Donatello you can be.