Though we’re still months away from the actual release of Denis Villeneuve’s Dune (tentatively scheduled for December 2020), we can now finally get a real glimpse into the eagerly awaited science-fiction film. Take a look at the first official trailer for Dune in all of it’s sandy, dusty, spicy glory!

As you can see from the Dune trailer, Villeneuve realized the fantastic world of Dune like never before. The trailer kicks off with a bit of mystery, showing a conflicted-looking Paul Atreides (Timothee Chalamet) as he struggles to interpret a dream. We’re then treated to various clips of the Atreides clan, as well as their home planet of Caladan, before catching our first visual of the desert plan Arrakis. From there, we start to get a sense of the upcoming war Paul and his family will face upon moving to this desolate planet.

Without giving too much away, the trailer has us hooked. The various ships, palaces and suits all look awesome and seem pretty spot on compared to how they’re explained in the book. Likewise, the battles look just as exciting. Though we don’t get the chance to witness a full-on fight, it’s nice to see Duncan Idaho (Jason Momoa) slashing people to ribbons. But if you know next to nothing about Dune, you may still know about the Makers, aka those giant terrifying sandworms. It wouldn’t be an appropriate Dune trailer if we didn’t finally get a peek at these mythic beasts, and in that Villeneuve delivers with a truly terrifying, and magnificent, sand-swimming creature.

But, if you’re still new to the world of Dune and are wondering what all the fuss is about, then you should really read the book ahead of the theatrical release in December. In fact, even if you aren’t a fan of science-fiction generally, we highly recommend this epic novel, which is the perfect read for anyone looking to pass the time. Think of it as Game of Thrones meets Star Wars.

Despite COVID-19, social distancing and quarantines, the new Dune movie adaptation is still slated to hit theaters December 18, 2020. Originally published in 1965 by Frank Herbert, we recently named Dune one of the best science-fiction books of all time.  The novel is a masterclass in world-building, which makes it the perfect quarantine read for anyone stuck at home and bored.

Herbert throws you into the universe of Dune the moment you open book. While the book opens on the planet Caladan, the characters are quickly transported to the desert world of Arrakis. Herbert doesn’t waste time with hand-holding or long-winded explanations; he tosses foreign words and prophecies your way and references futuristic corporations and customs as if they’re common knowledge. But despite the otherworldly locations, Dune is surprisingly easy to get into. And once you’ve grown accustomed to Herbert’s pacing and rhythm, you fall right into this exciting world.

While there’s never a bad time to read a sci-fi epic like Dune, now is truly a perfect time to settle in and pick up this book. As mentioned above, the first installment of the two-part film is debuting in December of 2020. The film stills already look amazing, but if those don’t sway you, just look at the cast: Timothee Chalamet, Rebecca Ferguson, Zendaya, Dave Bautista, Jason Momoa, Josh Brolin, Oscar Isaac, Stellan Skarsgard and Javier Bardem, just to name a few A-list celebrities. If you could handpick all of the best actors of the past few years and then drop them into a movie, the cast would look a lot like this. 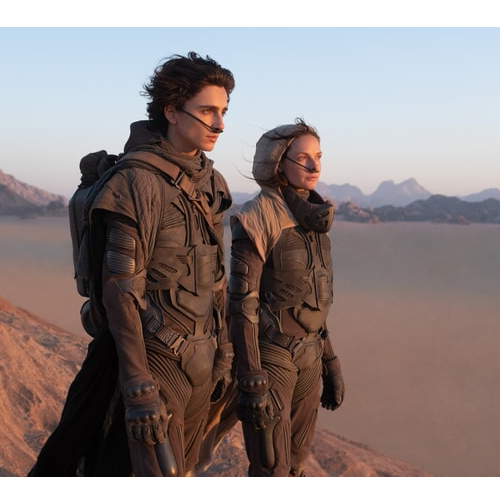 Though the movies (part one and two) are only covering the first book, there are actually six books in Frank Herbert’s original series. Herbert’s son, Brian Herbert, went on to write 14 other titles along with collaborator Kevin J. Anderson. Needless to say, there’s a lot of content in the world of Dune. That being said, we recommend sticking with the first book. Like a lot of science-fiction series, the Dune franchise offers diminishing returns.

This isn’t the first time someone has tried to bring Dune to the big screen, though. Back in 1984, David Lynch adapted Dune with mixed results. Unfortunately for Mr. Lynch, technology wasn’t what it is today, and the resulting movie came out looking cheesy at best. Judging by the film stills we’ve seen thus far, director Denis Villeneuve might have finally made an adaptation worth of Herbert’s epic sci-fi adventure.

But okay, enough. You took the bait and now you’re hooked, already counting down seconds, minutes, hours and days until the movie premieres. But what exactly is Dune about? Read on below for a spoiler-free summary, or go ahead and add the book to your Kindle and discover the world for yourself. 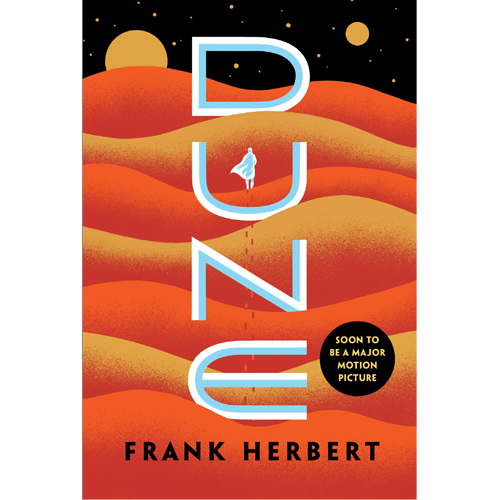 Dune follows the story of an interplanetary society. In this society, one high-ranking family, the Atreides, move from their homeworld of Caladan to begin ruling over the desert planet of Arrakis. See, Arrakis is rich in a very hot trade commodity known as spice, a rare drug that extends life. Like Game of Thrones, Dune is full of shifting alliances, betrayals, magic and combat. Outside of the usual political trials and tribulations, there are also massive sandworms that inhabit the desert planet. To the worms, the dunes of Arrakis are like waves in the ocean, and they have no problem swimming through them and gobbling up anything that moves along the giant sand dunes.

Since you have time on your hands anyway with the quarantine, now is the perfect time to settle in and pick up a copy of Dune. It’s by no means a short book, but it’s a quick read and page-turner. Once you get sucked into the sandy world of Arrakis, you’ll find Dune a tough one to put down. And since the movie isn’t out until December, you have plenty of time to sift through the story in preparation.