Ask any 90s child about “non-expanding recreational foam” toys, and chances are you’ll receive nothing more than a blank stare. However, ask the question using the far more familiar “Nerf” abbreviation, and it’s more than likely your recipient will smile and become flooded with memories of fun-filled hours spent battling with friends, family and stationary targets. Given this long-lasting affection and ability to provide fun for all, it’s little wonder lots of big kids still enjoy some of the best Nerf guns for adults.

It’s certainly a testament to Nerf’s enduring high quality and ability to reinvent, that in a world filled with virtual reality, lightning-fast game consoles and smartphones, Nerf guns remain as popular as ever. The company is recruiting new soldiers every day.

But one thing few Nerf fans are aware of is exactly where this long-established toy came from.

Believe it or not, the leading non-expanding recreational foam toy actually finds its beginnings during the creation of a game based on the lives of cavemen. Over five decades ago, in the year 1968, inventor Reyn Guyer, who was already famous for the invention of Twister, observed one of his fellow inventors bouncing one of the caveman game’s foam rocks over a net. This was the seed of creation.

After developing a whole line of foam ball-inspired games, Guyer was ready to go public with his new games. However, Milton Bradley, the first company he tried to sell his new creations to, wasn’t as enthusiastic about this foam-based fun and decided to pass. Like all successful inventors, Guyer remained undeterred and pressed on, with Parker Brother being his next port of call.

Luckily, they saw something in Guyer’s pitch. And while the gaming element took a significant cut back, a four-inch polyurethane foam Nerf Ball was born and became “the world’s first indoor ball.” From here, indoor foam entertainment became ever more present in American households.

Fast forward several years and Nerf Pool, Nerf Ping Pong and Nerf Table Hockey are all household favorites. And, you’ll more than likely remember the Nerf football (1972), which is still available in some form, even today.

After several changes in ownership, Nerf fell into the capable hands of Hasbro in 1991.

As for Nerf weaponry, 1989 saw the initial release of the Blast A Ball. This small, projectile-firing cannon was the first in the long line of Nerf’s popular blasters. Today, the Nerf line features all kinds of weapons, including motorized, pump-action and pull-and-release models as well as the ball and dart-firing options which are most popular at this time.

Below, you’ll find our favorite 15 Nerf guns for adults to inspire backyard or household warfare. With these in your arsenal, you’ll be on your way to creating some of your favorite memories with your friends or family.

The Nerf Rival Phantom Corps Hades XVIII-6000 is an intimidating, large-capacity shooter that is ideal for backyard battling. And while it doesn’t feature a motorized firing mechanism, you will find an ergonomically designed pump-action handle that lets you fire, pump and reload in a near-instant action. Add this to the impressive 60-round capacity, and you’ll have plenty of say on the battlefield. Plus, like many other models in the Rival range of Nerf weapons, this shooter comes with two indicator flags to ensure you can always tell friend from foe when the heat is on. 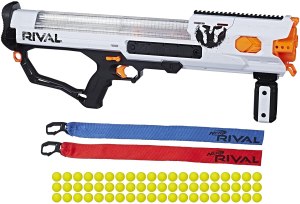 While a pistol-style weapon may, for the most part, limit your magazine size, the Nerf Rival Roundhouse XX-1500 Red Blaster strikes a balance that rewards you with greater maneuverability on the battlefield. The blaster offers a 15-round capacity in the form of five integrated magazines that hold up to three rounds each. For in-use comfort, the pistol sports a large, ergonomic handle, while the spring-loaded firing mechanism can launch rounds at a velocity of up to 90 feet per second. 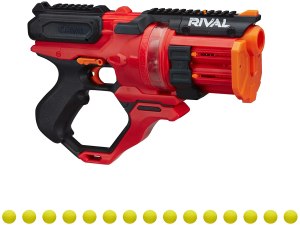 Not willing to spend a few hundred dollars on a NERF gun from a toy brand? We get it! This one costs less than $15 and still packs plenty of punch inside its rotating barrel. It can fire six darts in a row and shoot them up to 90 feet in front of you. You can slam fire all of them in a blasting wave at targets by moving the slide back and forth while holding down the trigger. The package it comes in is designed to be easy to open and recyclable, and it comes with six darts so you can get started right away. 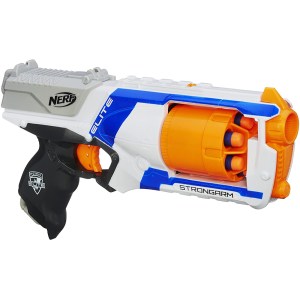 The NERF Mega Motostryke Motorized Blaster is a lightweight yet powerful, medium-capacity weapon that is great for around-the-house or backyard battles. This advanced blaster includes a 10-dart capacity in the form of a removable clip which allows for quick and easy reloading. It comes supplied with 10 official Nerf Mega darts which are fired using the trigger-controlled, motorized mechanism, meaning you can fire them one after another in a rapid-fire pattern or one by one for a more conservative approach. 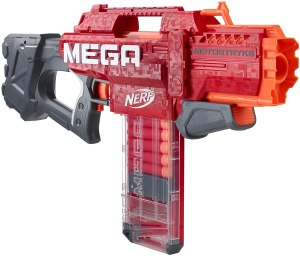 The NERF Ultra Pharaoh Blaster is another well-proportioned, mid-range blaster that means business. The bolt-action reloading mechanism ensures you feel every round and makes it feel like you’re really in a conflict. When fired, each of the rounds in the 10-dart removable clip can reach distances up to 120 feet, meaning your enemies will likely be in range long before they even think about firing at you. Additionally, this unique piece includes attractive gold accents in the design and comes with special edition gold Nerf Ultra darts for a complete look.

For a comfortable, fully automatic, rapid-fire experience on the battlefield, it’s hard to look beyond the Nerf N-Strike HyperFire Blaster. This intimidating looking device is powered by four D-cell batteries (which are not included) to deliver the smooth and fast firing of the 25 darts housed in the removable drum, which clips into the underside of the blaster. With fresh batteries, you’ll enjoy firing rates of up to five darts per second and distances reaching a maximum of 90 feet (27 meters). The gun comes with 25 Elite darts in the box. 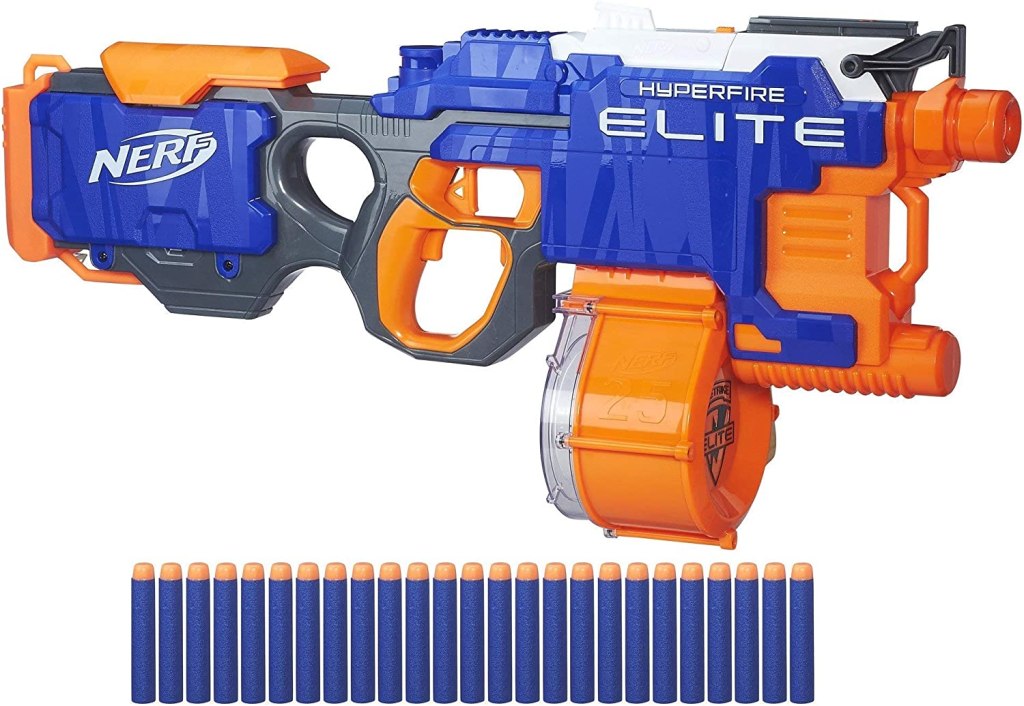 If you like the idea of customizing your weapon to the situation or opponent you’re facing, definitely consider the Nerf Modulus Regulator. This fully customizable, battery-powered blaster comes with several attachments, including a swivel handle, a storage stock, and two different barrel-scopes, allowing you to fit your gun to your needs. It also offers three modes of firing, which include single fire, burst fire and continuous fire. It’s also supplied with two 12-dart clips as well as 24 Modulus Elite darts and handily includes a built-in indicator light to let you know when your clip is empty.

If you’re a Fortnite fan, this NERF gun is for you. It’s inspired by the blaster used in the infamous video game and comes with three bush targets you can practice your aim with. It’s got a six dart clip that’s easy to load and includes a scope you can look through for more precision, or you can remove it altogether if it’s not your thing. It comes with six NERF darts so you’re good to go right out of the package. 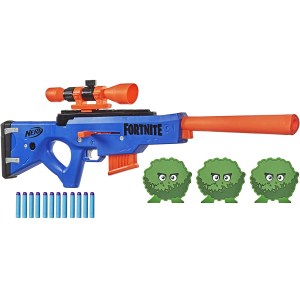 If you go along with the idea that bigger is better, then the NERF Overwatch Soldier: 76 Rival Blaster could be the right choice of weapon for you. Created in the style of Overwatch hero soldier: 76’s signature weapon from the popular game franchise, this chunky piece of kit will have your enemies quaking in their boots long before you’ve even fired a shot in their direction. The battery-powered, motorized device is capable of unleashing high-impact rounds from the 30-piece capacity hopper built into the gun. These rounds can reach speeds up to an impressive 90 feet per second, which is why it’s handy to have a built-in trigger lock to prevent any unwanted firing. 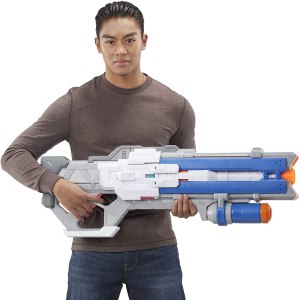 This fully motorized NERF gun can unleash rounds at up to 110 feet per second and can hold 100 rounds in its barrel. It comes with 80 NERF hyper rounds that are smaller and more dynamic than the classic darts. It’s got a large, easy-to-load hopper that’s perfect for gameplay. It’s also built with tactical rails for refilling the canisters as quickly as possible. 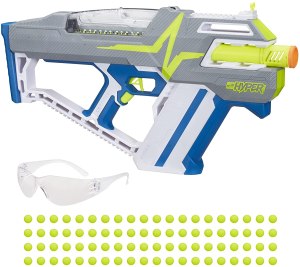 With its dual 25-dart ammo drums, the Nerf N-Strike Elite Rhino-Fire Blaster is capable of firing off a maximum of 50 darts before you need to reload. Assisted by a motorized mechanism, this means you’ll have plenty of time to take out your enemy before being empty ever becomes a concern. Alternatively, for a different approach, hold your finger down and allow the six D-cell, battery-powered device to spray fire all over the show, either from the handheld or tripod-mounted arrangements, depending on your preference. 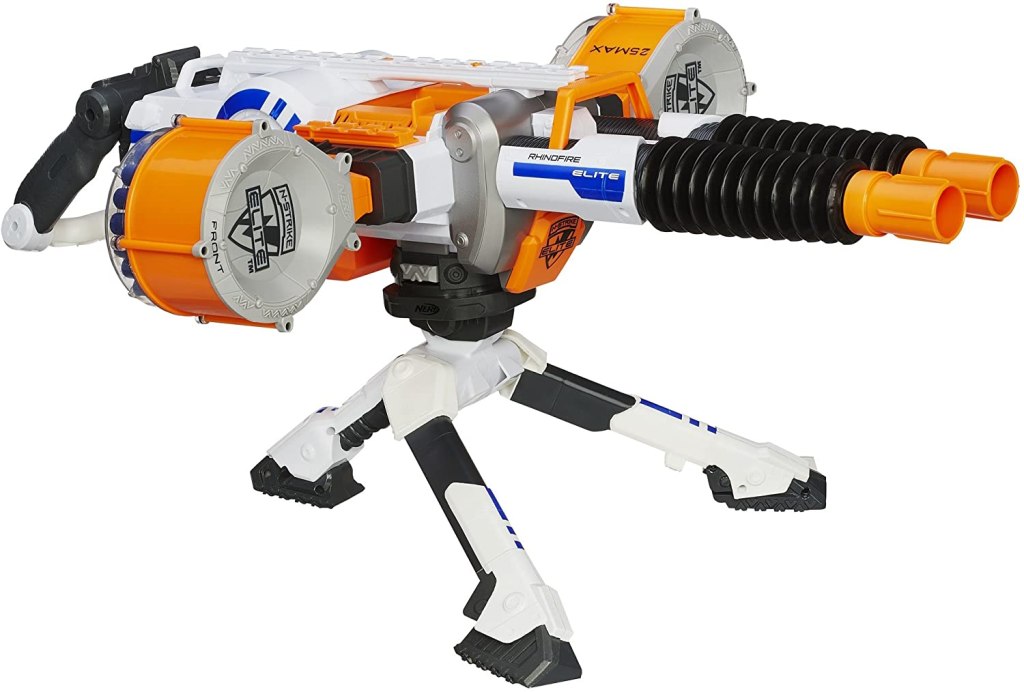 Given its capability of firing up to eight rounds per second, the Nerf Rival Prometheus MXVIII’s impressive firepower is rarely going to be matched on the battlefield. This well-endowed device is ideal for performing Swarzenegger and Stalone-like, hip-shooting bullet sprays to clear the way of potential foes. Unlike many other battery-powered guns, this one includes a rechargeable battery onboard, preventing the need to purchase disposables over and over. The large-capacity hopper can hold up to 200 Nerf Rival rounds and launches them at speeds of up to 100 feet per second. Additionally, the gun is supplied with a shoulder strap and both a red and blue team flag to ensure you know who’s on your team. 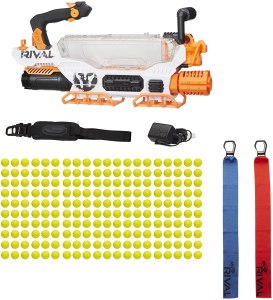 This NERF gun is made for shooting at long distances and has advanced features for taking your gameplay to the next level. This gun can shoot darts further than any other NERF gun, up to 120 feet in front of you. This blaster gun has a high-capacity drum that can hold up to 25 NERF darts. Each NERF dart included with this gun features an innovative design with a flight tip for maximum distance, as well as Aerofin technology and lightweight NERF foam. 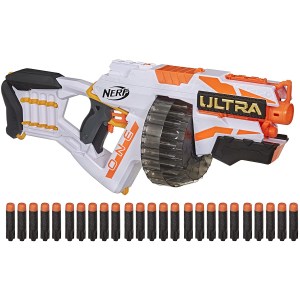 If you prefer the idea of a large-capacity dart gun over firing small rounds, the Nerf Elite Titan CS-50 Toy Blaster with its 50-dart drum is the answer. It’s fully motorized and requires batteries to fire off the 50 Nerf Elite darts that are supplied with the device. Aesthetically, the blaster looks super cool as the barrel turns during use, while the accompanying shoulder strap ensures you remain comfortable as you spray your opponents with a foam-filled nightmare they won’t forget any time soon. 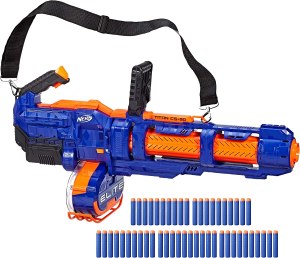 If you’re going to invest in a serious NERF gun for adults, you’ll need some protective equipment during the heat of battle. This kit isn’t made by NERF, but it comes with everything you need including a tactical vest, mesh pockets for holding a blaster, plenty of slots for spare darts, a bandana and goggles for protecting your eyes. It’s got an ergonomic design for comfort, and vision gear so your eyesight isn’t compromised mid-battle. 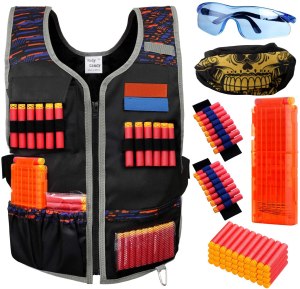