The National Football League is about to unofficially kick off its 101st season. That’s right, folks; the first round of the NFL Draft will air Thursday, April 29 at 8 PM EST, and fans are either looking forward to the season’s picks or nervous about where their team’s headed. Either way, the return of football is something worth celebrating (especially after the uncertainty of last year’s schedule). So if you’re thinking about throwing a safe and healthy NFL draft party, as long as your soiree meets the CDC’s COVID-19 guidelines in your area, you have our full support.

Last year’s NFL season was definitely historic. In addition to it being the foundation’s 100th season, it was also played through a global pandemic. Tom Brady won his seventh Super Bowl, Drew Brees announced his retirement, and the season ended in a soul-crushing number of tearful injuries, including those of Dallas Cowboys QB Dak Prescott, New York Giants RB Saquon Barkley, and Cleveland Browns WR Odell Beckham Jr. Heading into the 2021-2022 season, fans are keeping their fingers crossed for more victories and less injuries, and what better way to manifest good vibes than with an NFL draft party to remember?

To ensure your celebration is a touchdown, we’ve rounded up some NFL draft party essentials to help keep the good times rolling.

For anyone who’s been contemplating investing in a Ninja Foodi, now’s the time. The Ninja Foodi Smart XL is a six-in-one indoor grilling system that grills, bakes, roasts, broils and dehydrates, making it the ideal kitchen appliance for whipping up your favorite barbecue and finger foods (like wings and fries) for the big night. It also doubles as an air fryer. What’s more, cleaning up is as easy as putting the pieces in the dishwasher, an especially helpful feature when your team doesn’t draft your player of choice, and the last thing you feel like doing is cleaning up the kitchen. 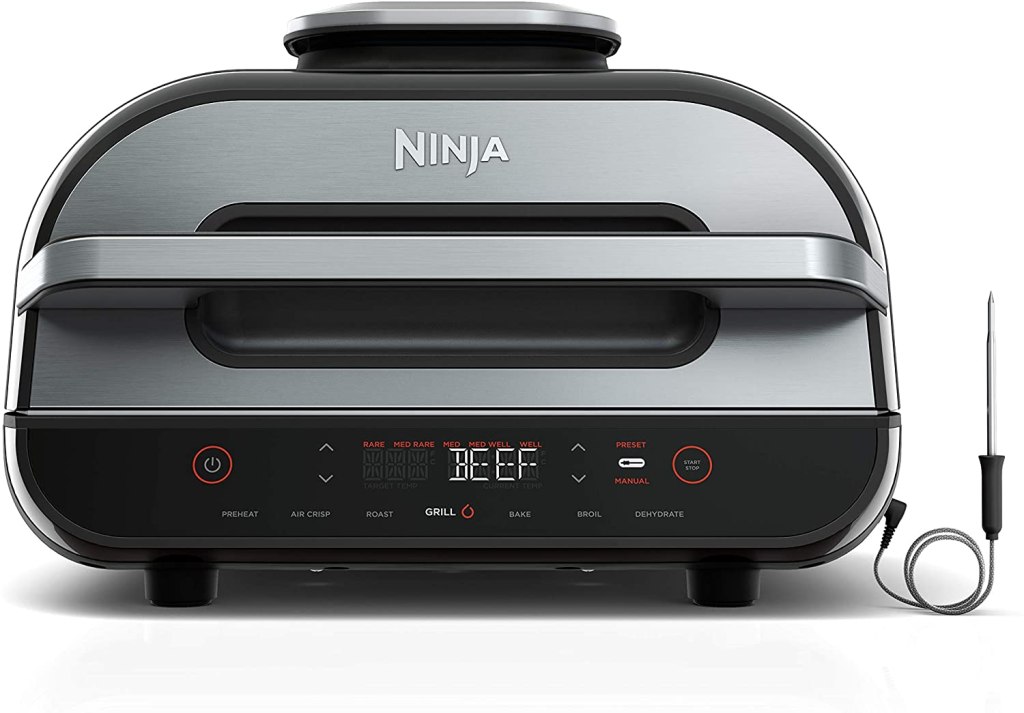 Out of the loop on prospective players? Pick up a copy of DTP’s 2021 NFL Draft Guide before April 29 to get caught up. DTP’s guide is a breakdown of all the 300+ prospective players in the 2021 draft class. In addition to source material on who your team’s most interested in drafting, you’ll also get to know the future competition your team could be up against. And if all the scouting lingo doesn’t register, author Daniel Parlegreco includes a glossary to make his content more digestible for even the most casual football fans. 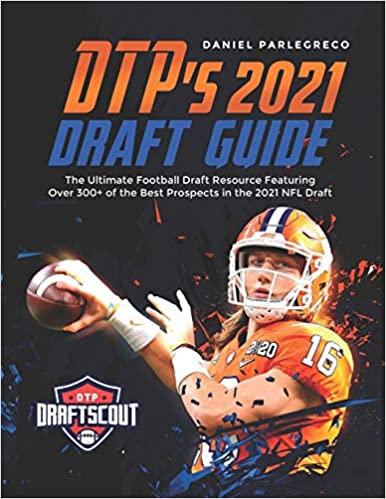 For your ultimate viewing pleasure, there’s ESPN+. A plus membership gives you access to an extensive NFL archive, over 3,000 articles from top sports reporters, daily radio telecasts, player breakdowns, and fantasy tools to help your team level up. Not only is ESPN+ an elite channel for the draft, but it’s also an elite source year-round for NFL content around the clock. 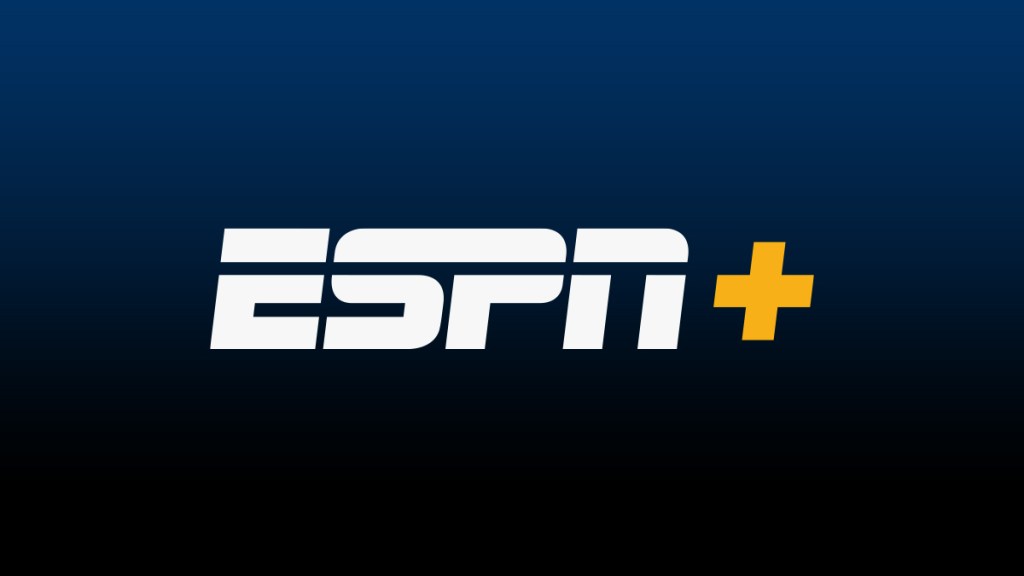 If you prefer wine over beer, and just so happen to be a diehard Dallas fan, here’s something to toast to. Global winery, In Good Taste, hosts virtual wine tastings around the U.S., and on April 28th from 7 PM to 9 PM, the brand is partnering with former Dallas Cowboys, Darren Woodson (safety) and Tyler Clutts (fullback) for an exclusive NFL Draft Pre-Game Wine Tasting event. You can get access to the virtual zoom party for $100, and your purchase will include a shipment of In Good Taste’s Wild Child tasting flight of eight mini bottles to sample alongside Woodson and Clutts as they share their behind-the-scenes draft stories. Plus, 20% of proceeds will be donated to the C5 Youth Foundation of Texas, which helps middle and high school students from under-resourced communities pursue personal success and prepare them for college and the workforce. 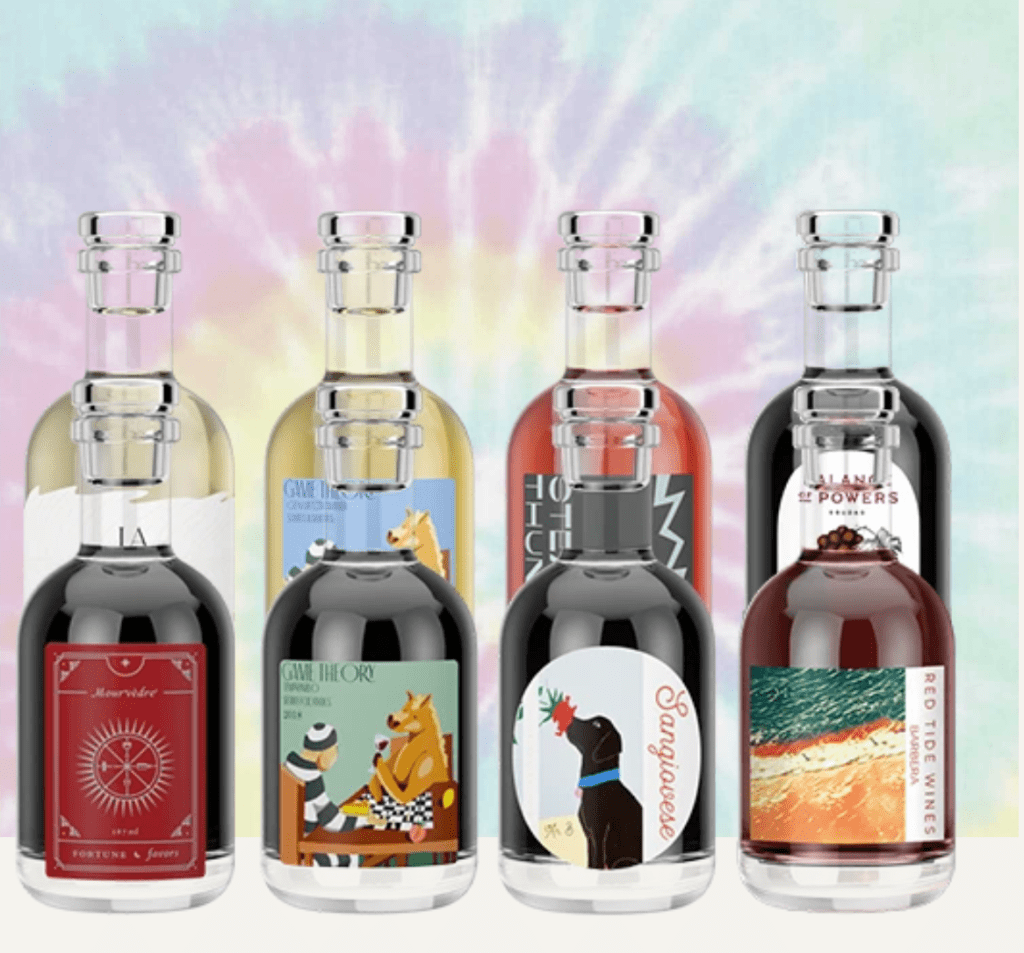 Courtesy of In Good Taste Wines

If wine tastings aren’t your thing, maybe a round of shots will get you hyped for the night ahead. Pick your team and order a four-pack of decorated shot glasses from PSG to keep with the party theme. Toss one back every time the commissioner or a coach gets booed, or pour a round to celebrate (or mourn) your team’s picks. 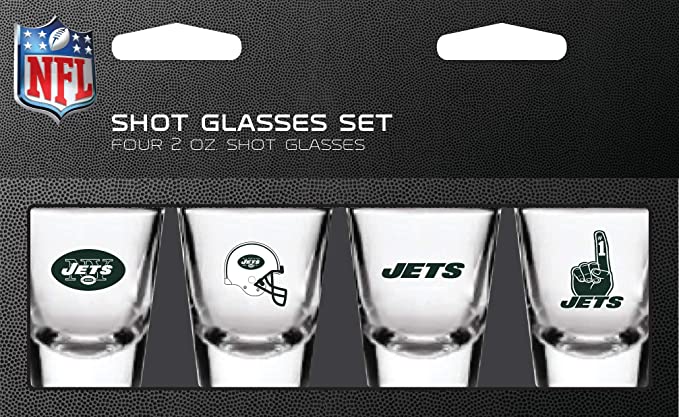 Would it really be a proper tailgate without some entertainment? Prior to pickings, head outdoors for some friendly competition with this cornhole board from the NFL Shop. Search the site for your team’s colors and logo, and your order will include two birch veneer plywood boards and eight 16oz bean bags. The backyard board game is a classic for outdoor parties, plus It’s a socially distanced way to celebrate the night with your neighbors, friends, and family who might not feel comfortable gathering in close quarters just yet. 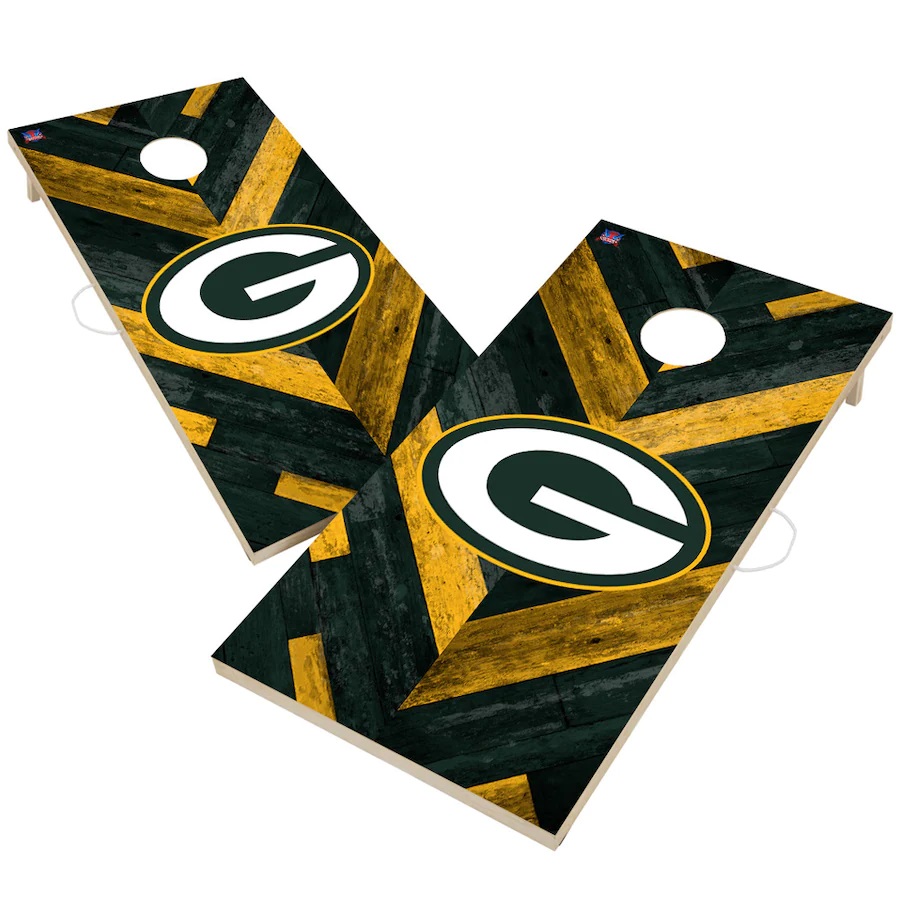 You don’t have to be a pro athlete to dominate this field. From Tudor Games comes the NFL Electric Football Game, in which players are designed with an all-new “invisibase cleat technology” that makes sending players wherever you want them to go on the board that much easier. The set comes with 85 pieces, including two triple threat quarterbacks that pass, run, and kick. The set also comes equipped with 70 NFL team and conference stickers, so you can customize the system per your favorite NFL teams’ logos and colors. 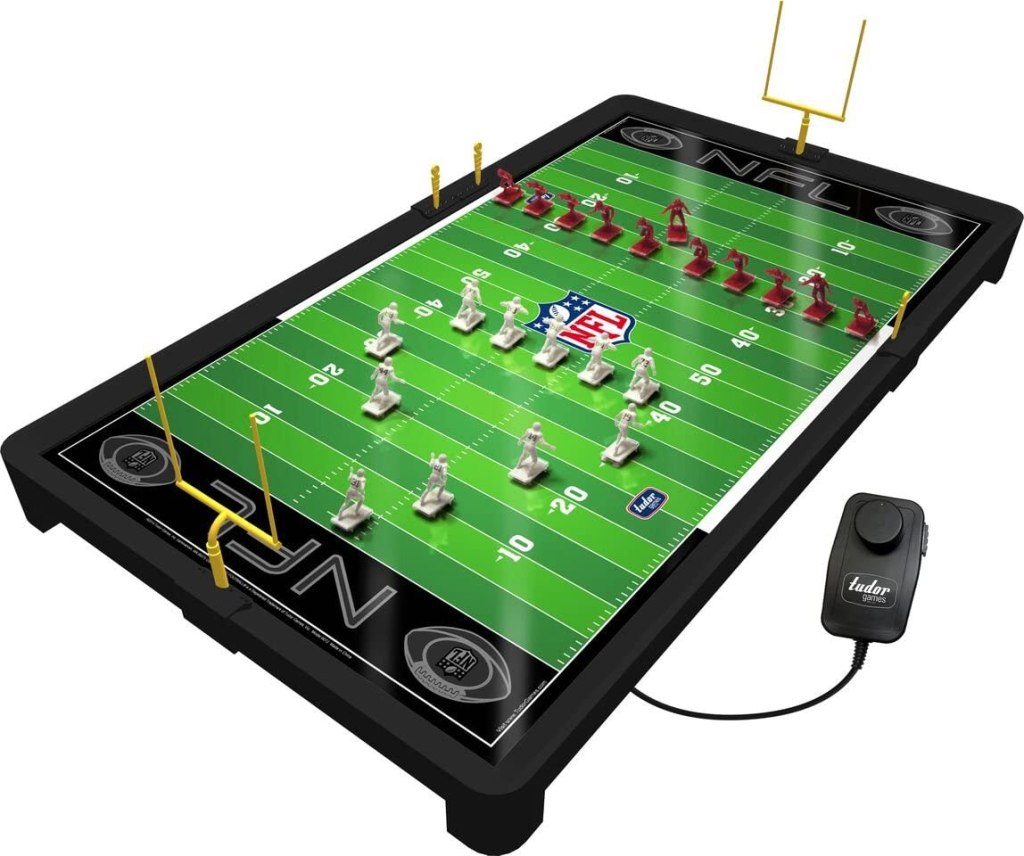 Take your NFL draft party to the next level with football themed decorations. Paper plates and tablecloths with a football field design, paper cups with plays scribbled on them, and penalty flag napkins are just some of the décor pieces included in this festive package from Island Genius. The set serves up to 24 guests, but if you don’t use them all, that’s fine. Save the rest and bring them back out for the first game of the season. 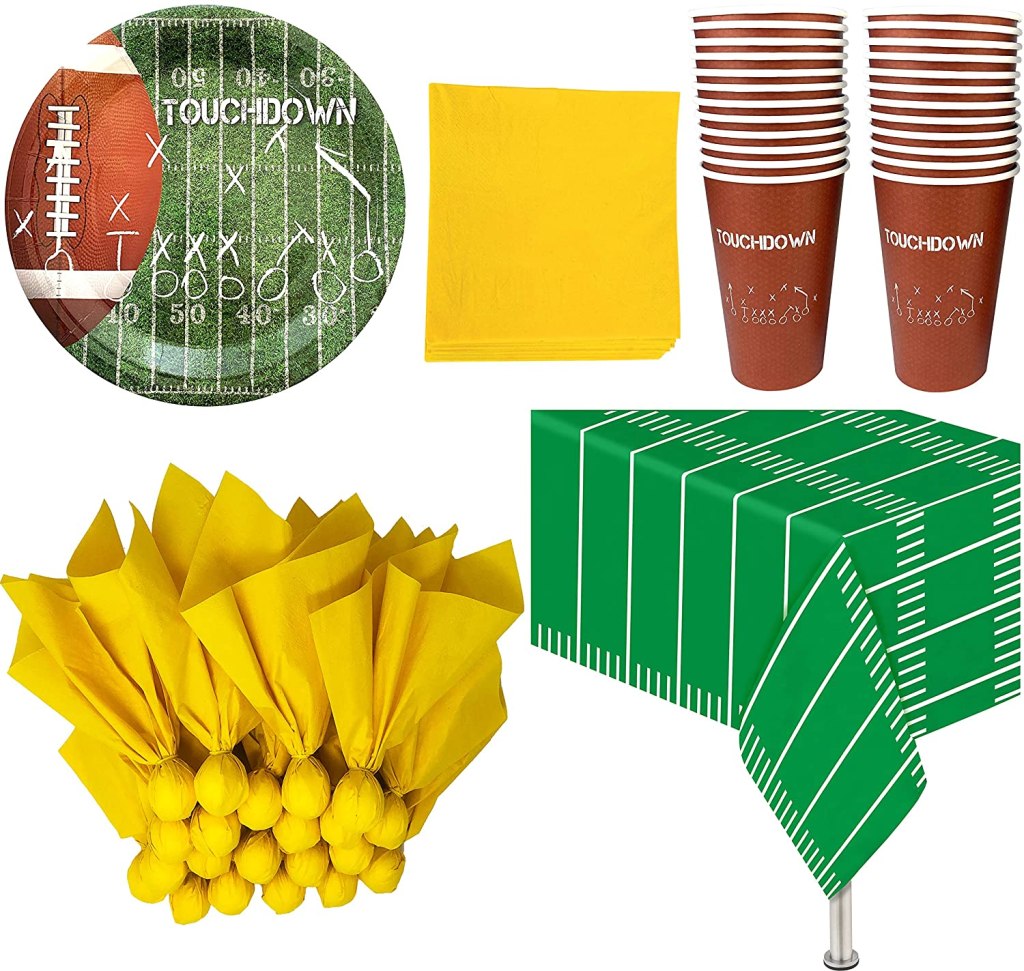 Need a drink? This inflatable football field buffet cooler will keep your spirits up and your refreshments chilled all night long. First, add air, then add ice, and dump in your favorites: beer, soda, seltzer, and juice boxes for any little fans crashing your party. 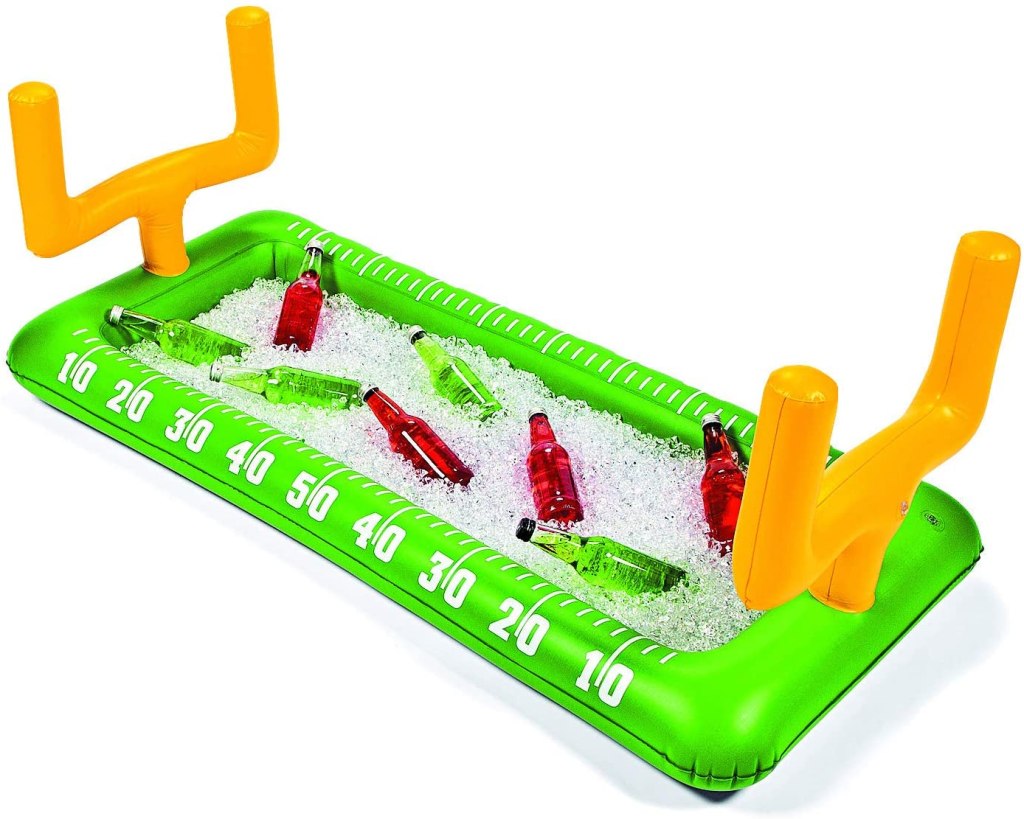 The first round of the NFL draft is on Thursday, April 29th, so if you don’t want to go too hard on a weeknight, it’s understandable. Save the shots and hard liquor for the weekend and, instead, break into a variety pack of Bud Light Seltzer for day one. You can choose from a pack of 12 or 24, and remember, one can is only 100 calories and 5% ABV, so don’t feel guilty if you’re so inclined to grab a second. 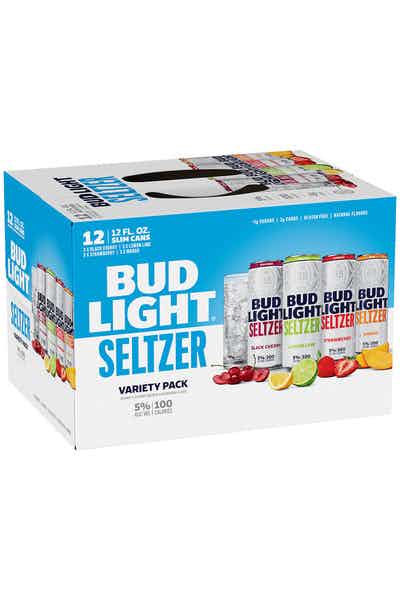 The Best Gifts for Football Fans You Can Order Right Now