Pete Davidson has always been an eclectic celebrity, to put it lightly.

From his earliest SNL days, he’s rejected almost every convention of glamorous celebrity — from wearing laid-back, mismatched clothing to saying whatever he wants on late night.

When he began dating Ariana Grande, and ultimately got engaged to her in 2018, the world was surprised, but not shocked. Sure he’s not the polished Hollywood TV star we’re all used to, but he has a lanky appeal — not to mention obvious BDE — all the same.

Add Comment
4 People Commenting
Dara
7 months
Pete & Kanye how Fun to watch their craziness, sure takes everyone’s attention off our Lives that...
Rich Rowand
7 months
Meh . . . he's mildly funny.
Miles
7 months
Really? That is just sad that you admire this guy so much.

Add Comment
4 People Commenting
Dara
7 months
Pete & Kanye how Fun to watch their craziness, sure takes everyone’s attention off our Lives that…
Rich Rowand
7 months
Meh . . . he’s mildly funny.
Miles
7 months
Really? That is just sad that you admire this guy so much.

He’s the personification of not giving a fuck about what people think or expect of you, while also openly sharing his insecurities, and it’s totally worked for him. As his unapologetic charm has landed him dates with some of Hollywood’s most desirable stars (Ariana Grande, Kate Beckinsale and Kim Kardashian), he’s also become an indispensable regular in the SNL cast and is now set to star an upcoming TV show inspired by his life.

The world is fascinated with Pete Davidson, and we’re right there with everyone else. What makes him THE most interesting celebrity in the world? We’re so glad you asked, and we’d love to tell you.

Kim Kardashian, the reigning queen of internet virality and currently the center of a very public dispute with estranged separated husband Kanye West (#TeamPete4Ever), just confirmed she’s dating Pete with a very sweet post to her 292 million followers on Instagram. It even includes a Ben Affleck reference; keep scrolling to find it.

Not only does this validate what the internet rumor mill has been churning out for some time, but it means they’re more than just a few weeks-long fling. Maybe they even… have a connection? Who knows. Needless to say, it looks like they’re having fun, and not that he needed it, but dating Hollywood’s favorite sex symbol definitely raises Pete’s clout stock price.

So even if this Kim Kardashian-Kanye West divorce ends up being one giant publicity stunt for Balenciaga, Pete has someone become the unlikely star of the drama.

Everyone’s been following the Kimye divorce for weeks, and Kanye has been harassing Kim and Pete online for weeks (or “Skete”, as Kanye calls him), but we hadn’t heard a ton from Mr. Davidson, until now. His friend and SNL writer Dave Sirus reportedly leaked text messages this weekend showing Pete hilariously taunting Kanye for repeatedly targeting him and Kim online and bashing their relationship. Like a gentleman, he also defended Kim’s parenting skills.

In the now-viral texts, Davidson defends Kim saying that Kanye is “so f-cking lucky she’s your kid’s mom” and that he’s kept SNL from joking about Kanye for months for the sake of the kids.

“I don’t want the father of my girls kids to look bad out there,” he said. “I have your back even though you treat me like s— because I want everything to be smooth.”

He also warns that after months of holding back, and not receiving the same from West, that he’s growing impatient, ending with, “But if you continue to press me like you have for the past 6 months I’m gonna stop being nice.”

The exchange ended with a one-liner that’s already become a legendary meme. After West asks about Pete’s location, he responds, “In bed with your wife.”

Ah, to be rich, successful and gloriously petty all at once. 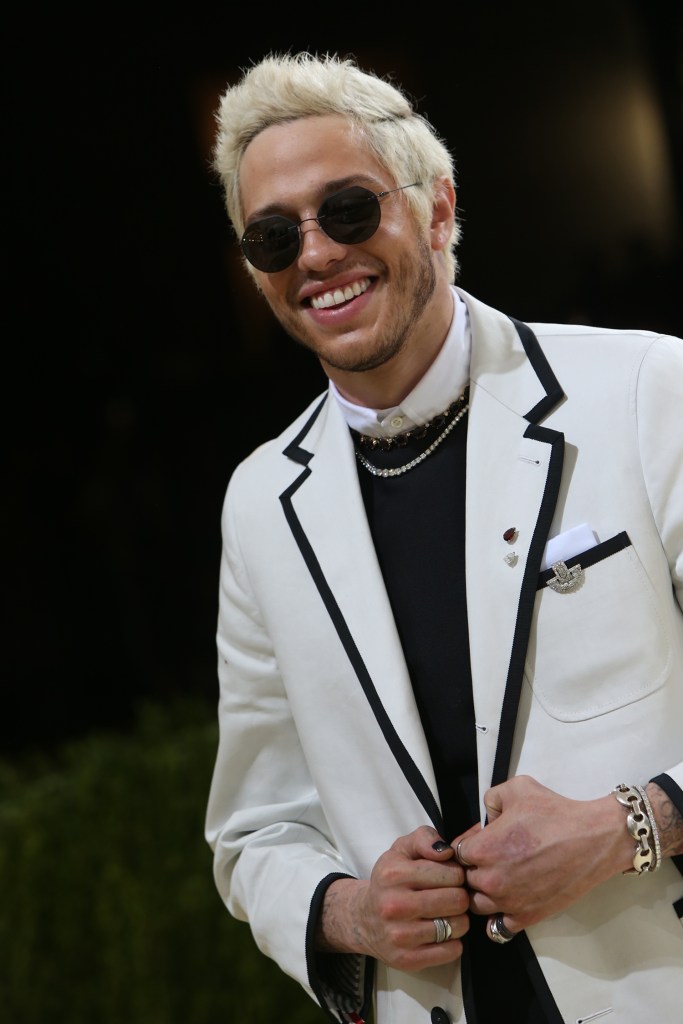 He was originally set to join the next human passenger Blue Origin flight to space on March 23rd, but according to the New York Times it’s been rescheduled to March 29th and he can no longer attend. Imagine being too busy with other exciting projects to go to space? Must be nice.

4. Kanye West Recently Made a Music Video About Murdering Him

Back to the Kanye drama, recently the rapper/singer/producer released two separate music videos depicting Davidson being harmed, one in which he’s being kidnapped and buried from the neck down.

Kanye has made his feelings about Davidson and his relationship with Kim K. abundantly clear in recent months, but as his Instagram post, which has since been taken down, declared:

“Art is therapy. Art is protected as freedom of speech. Art inspires and simplifies the world. Art is not a proxy for any ill or harm. Any suggestion otherwise about my art is false and mal intended.”

Inspiring this level of hatred from one of the most successful, and controversial, rappers and musical artists of all time magnifies his celebrity and cultural significance even more. There’s no bad press, right?

5. He’s the New Owner of a Staten Island Ferry Boat

We hope you’ve seen The King of Staten Island, Pete’s autobiographical comedy about the community he grew up in and his father, a firefighter who died in the Twin Towers on 9/11.

Well, Pete’s love for his native borough has gone nautical, with his recent acquisitioin of a Staten Island Ferry boat with SNL co-star Colin Jost. The duo plan to make it a dining and entertainment destination and dock it in New York City. A small business owner too?! What can’t this man do? 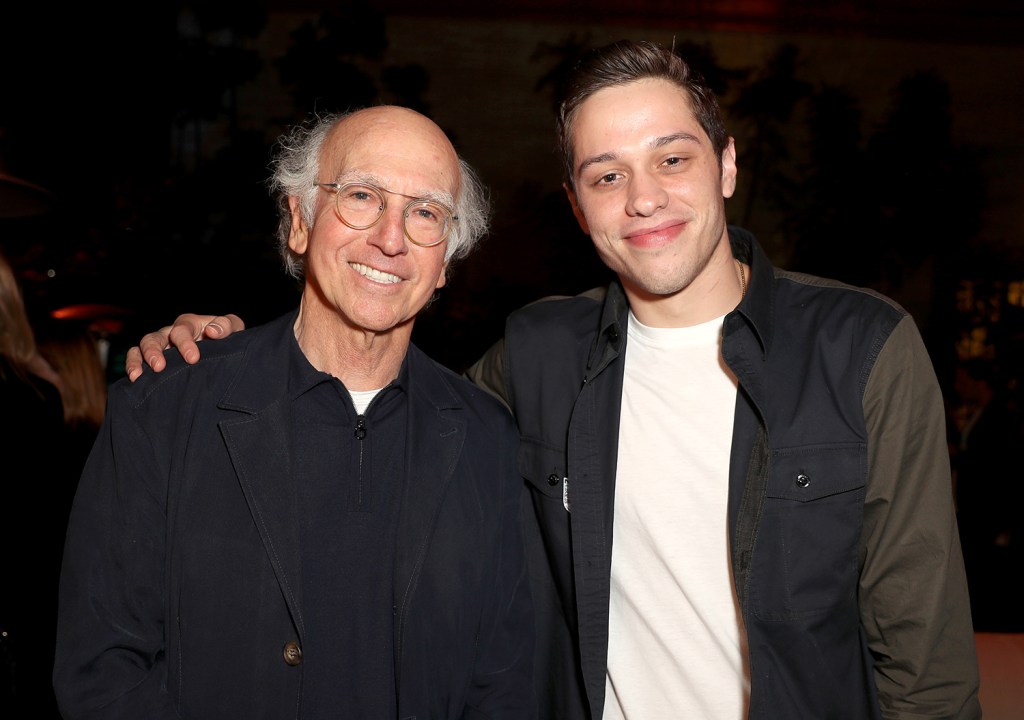 Courtesy of Chelsea Lauren for Variety

6. He’s Starring as a Fictionalized Version of Himself in a New Lorne Michaels TV Show

SNL’s Lorne Michaels and Pete Davidson have been close for years, with Pete joining as a guest on the producer’s family vacations, and now their professional relationship is growing with a new TV show starring Davidson as a fictionalized version of himself.

The show, entitled Bupkis is going to be a Larry David/Curb Your Enthusiasm-esque show co-written by long-time friend Sirus and Judah Miller from Crashing.

The show will explore the world through Davidson’s eyes with raw, unfiltered storytelling that’s sure to be as hilarious as it is melancholic and emotionally cathartic. Davidson has never been shy about his many facets, and we expect this show will explore all of them.

Let’s be real: no celebrity in recent memory has tried so little and achieved so much. And we don’t mean to disparage his work ethic! But while other young actors desperately try to improve their clout and stir up drama, Pete seems to effortlessly win over fans just by existing. He’s the perfect celebrity for Gen Zers looking for a role model that’s as self-deprecating as he is hilarious, and as emotionally raw as he is indifferent towards the celebrity status he’s gleamed.

We salute you Pete, and can’t wait to see what you do next.

The Everyman’s Spring Fashion Guide: 9 Men’s Fashion Trends We Love, and 1 We Love To Hate