Guys, if you’re interested in getting Disney+ for $1.99, there’s still time!

As part of the continuing Disney+ Day celebration, interested fans can score this amazing discount until September 19. That’s right, new and returning Disney+ members can get a one-month subscription for just $1.99. This knocks $6 off one month of Disney+’s typical monthly subscription price of $7.99, making it the perfect time to give Disney+ a try if you haven’t already.

Disney+ has become wildly popular since its introduction in 2019, thanks to the vast catalog of films and series within its expanded universe, including the Pixar, Marvel Cinematic Universe, and Star Wars franchises. The annual Disney+ Plus Day event, which debuted in 2021, was created as a celebration of the brand’s entrance into the streaming space and “features content premieres from the streaming service’s marquee brands, special experiences and offers for subscribers and fans, and more,” a Disney press release shared.

Upon sign-up, new and existing Disney+ subscribers will have immediate access to new movies and series such as Thor: Love and Thunder, Pinocchio and Cars on the Road, all of which were available for streaming on September 8. Other programs like She-Hulk: Attorney at Law, Obi-Wan Kenobi, and Lightyear are currently streaming on the service, while highly anticipated films, including Hocus Pocus 2, Night at the Museum: Kahmunrah Rises Again and Disenchanted, will be released later this year.

Subscribers are also privy to other benefits of Disney+ Day, such as early entry into Walt Disney World and Disneyland Resort. Additionally, special screenings of Disney movies will play in select AMC Theaters from September 8–19.

Sign up for Disney+ during this special Disney+ Day period to receive all this and more. This 1-month promo offer is valid until 11:59 p.m. PST on September 19, 2022. After the 1-month promo period, Disney+ will auto-renew at its current monthly retail price or $7.99/mo plus tax until canceled.

Thanks to Disney+’s vast content library, you’ll be able to watch every Pixar, Marvel Cinematic Universe, Star Wars film and National Geographic. That means all of the Avengers films, the Toy Story franchise, Hamilton, The Mandalorian, and the entire Skywalker saga, as well as timeless classics such as The Lion King, Frozen, Aladin, Princess and the Frog, and Cinderella — all in one place.

Wondering if it’s worth it? Check out our extensive review of the Disney+ streaming service. 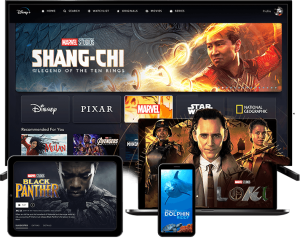 Finally Caved and Got a Disney Plus Subscription? Here Are the First 10 Movies You Should Stream