These are just some of the new terms used to describe this particular moment in the American workplace, which is rife with burnout.

It’s an interesting time for the office, as more workers are being called back to their desks after two-ish years of working from home. And even among people who are still working from home, the mundanity of the cubicle still has a strange draw. After all, the American version of The Office was by far the most popular show on Netflix in 2020, a year when most office workers were at home. More recently, the Apple TV+ show Severance, about a mundane yet mysterious office, proved to be a massive critical success.

Of course, before either of these shows explored the oddness that is the modern American workplace, Mike Judge’s beloved cult comedy Office Space deftly satirized the banality of cubicle life. One aspect that the film captured so well is that, when you’re confined to the three walls of a cubicle, you can become strangely attached to insignificant objects. For Zach Cherry’s Dylan in Severance, it’s a Chinese finger trap. And for Stephen Root’s Milton in Office Space, it’s a bright red Swingline stapler. Twenty-plus years after the movie, you can still buy that red stapler from Amazon (as well as from office supply stores, naturally).

Specifically, we’re talking about the Swingline 747 stapler in Rio Red. 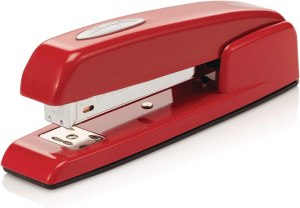 In the film, the confiscation of Milton’s prized Swingline stapler serves as a catalyst for his and his colleagues’ revolt against the Initech Corporation. The simple red stapler is the most iconic object from the film, even more so than the printer that gets beaten to death with a baseball bat. The 747 in Rio Red isn’t exactly the same as Milton’s beloved stapler. The one you can buy features an embossed logo plate on top of the stapler, while the stapler in the movie features a white script logo on the side of the stapler.

The reason the actual stapler and the one in the film deviate is that Swingline didn’t actually manufacture a red stapler at that time. Rather, the props department on the film took a black 646 stapler and painted it bright red in order to make it stand out on screen. According to ACCO brands, the company that manufactures Swingline, the cult popularity of the film led the company to start producing 747 staplers in red.

In 2019, 20 years after the film’s release, Swingline partnered with Fox to produce an exact replica of the 646 stapler from the film. It featured the white script on the side and was included in a giveaway and for sale. It’s long since sold out, but the 747 in Rio Red is a great option for Office Space superfans and anyone who loves cool office supplies.

Not for nothing, it’s also just a good stapler. Swingline was the first stapler to feature a top opening design, making it easier to refill with a full strip of staples. The 747 stapler also features a window on the side that allows you to check when the staples are low, and it can staple a thick stack of pages without jamming. Just don’t let anyone take it from you.

Get Ready To Binge: The Best Streaming Services With Free Trials in August 2022