SPY Makers is a new series focusing on inventors, designers and entrepreneurs who have had a big impact on the world of commerce. In this story, SPY Assistant Editor Taylor Galla looks back on the legacy of Zappos co-founder and all-around pioneer Tony Hsieh.

Tony Hsieh was more than the co-founder of Zappos, the popular online shoe store. He was also a tech entrepreneur who was instrumental in the rise of the e-commerce industry, and his life’s work has inspired countless people. On November 27, Hsieh passed away from complications caused by smoke inhalation after being injured in a fire.

According to The Wall Street Journal, his death was the culmination of a month’s long downward spiral that involved drug and alcohol abuse and self-destructive behavior. Tragically, Hsieh was reportedly days away from checking into a rehab facility, and it seems he was seriously affected by the isolation induced by the COVID-19 epidemic. In addition, Hsieh had recently retired as CEO of Zappos in August.

While we’re learning more about Hsieh’s death and the mental health struggles he faced, we also want to recognize the incredible legacy he leaves behind. While many tech entrepreneurs like to style themselves as “disruptors” and “innovators”, Hsieh earned those titles, and his impact on e-commerce and customer service cannot be overstated.

Zappos and its legendary company culture is studied in business schools. When Zappos was a young company, many people would never have considered buying shoes on the internet. Yet through incredible customer service and a strong company culture, Hsieh helped build trust in the nascent e-commerce industry.

Hsieh was in his mid-20’s and fresh out of Harvard when his first tech company, LinkExchange, sold to Microsoft for $265 million. This early success is impressive enough, but Hsieh was just getting started. He went on to co-found the online shoe retailer Zappos, which revolutionized the way shoes and apparel are sold online. Zappos also set new standards in the tech world for company culture and investment in employees. Hsieh believed that leaders should invest in their people, and he proved that this strategy worked.

Hsieh wrote the #1 New York Times bestselling book Delivering Happiness: A Path to Profits, Passion and Purpose, which sits on the must-read mantel alongside other immensely influential business books of the last decade. In his book, he details the secrets to his business success — prioritizing the happiness of his customers and employees at the same time, while also making money. It was a set of goals that, at the time of Zappos’ founding, seemed overly ambitious for a shoe store. Yet in 2009, Zappos had grown from a company with a handful of employees and no sales to a valuation of $1.2 billion on the day it was acquired by Amazon. Needless to say, Hsieh’s approach worked.

Delivering Happiness: A Path to Profits, Passion and Purpose 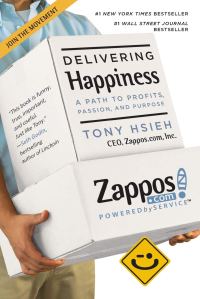 Courtesy of Amazon
Buy: Delivering Happiness: A Path to Profits, Passion and Purpose (Paperback) $13.72
buy it

Zappos will go down in history books as one of those companies that did a lot of things first. Hsieh and his team took a radical approach to customer service, making it core to the Zappos business model. It was a strategy that was costly at first but led to lifelong, dedicated customers in the long run. Zappos also made returns free, gave customers a 60-day trial period for all purchases, and put their phone number on every page of their website — inviting customers to call with any questions. They lowered the risk of shopping online, which helped build confidence in e-commerce overall. And if you’ve ever benefitted from free returns, you can thank Zappos and Hsieh’s vision.

That brings us to one of Zappos’ most unique investments — their call centers. In 2003 the company moved their headquarters to Las Vegas and brought as many of their 90 employees with them as they could. This was a big and costly investment for the company when it happened, costing them about $500,000 to move 70 of their people. The reason they did this was so they could staff their call centers 24/7 and increase the quality of customer service, as Las Vegas is a tourist-heavy destination where customer service is king. Their call centers didn’t have scripts, and that meant the representatives could let their personalities shine through. These reps weren’t measured on how many calls they handled in a day, but rather the quality of their service. 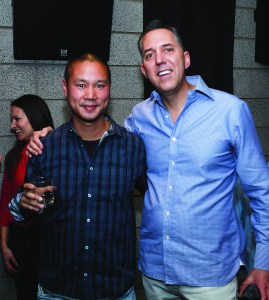 In a Harvard Business Review piece on growing Zappos, Hseih notes that “as unsexy and low-tech as it may sound, the telephone is one of the best branding devices out there. You have the customer’s undivided attention for five or 10 minutes, and if you get the interaction right, the customer remembers the experience for a very long time…”

In fact, Zappos’ longest call with a customer on record lasted about six hours because the customer wanted the rep’s help as she scrolled through thousands of pairs of shoes. Now that’s investing in your customers’ journey. 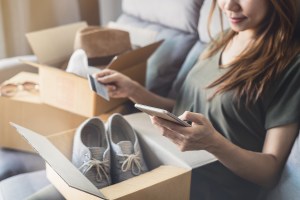 This emphasis on customer service and the success of Zappos was surely a collaborative effort, but Hsieh was the driving force behind many of these successes. He was always looking to make people happy and live life to the fullest, and that was reflected in the way he wanted every customer interaction to be as meaningful as possible. He’s a glowing example of how you can take values and principles from the real world and make them a priority in your business, and succeed while doing that.

Back in 1999, Hsieh and the Zappos team were probably the only ones who believed you could successfully sell shoes online. Up until then, shoes were something you needed to purchase in a store, usually after trying on several pairs. People liked walking into a shoe store and having a representative measure their feet, help them try on shoe after shoe and talk them through the fit, feel and look of each one. Now, those excursions seem like a distant memory given the convenience of buying shoes online. That transition? That was all Hsieh. 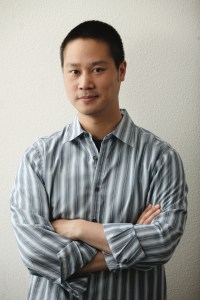 He not only convinced people that shoes were something you should purchase online, but he also established deeper trust in e-commerce on behalf of hundreds of millions of people. He turned the stressful, headache-inducing process of returning shoes to the store and made it easy. People went from being told the small scuff on the heel would cost them the full price of the shoes to printing out a label and dropping the original box off at UPS, no questions asked. It’s no wonder he garnered customer loyalty. Time and time again we’ve seen that people will sacrifice almost anything for convenience, something another e-commerce giant named after a rainforest has also capitalized on.

By 2007, 75% of shoppers who purchased something from Zappos were repeat customers. That trust was established by Hsieh and his dedicated team who valued customer service above all else. The entire e-commerce industry, including SPY, owes that team a debt of gratitude.

Hsieh will be remembered for his business savvy, his boundary-busting ideas and his commitment to people. He was known by friends and family as a man who valued community connection and making others happy above all else. He invested in communities he believed in, including restaurants and other businesses in Las Vegas, the town that helped grow Zappos into the giant online retailer it is today. If you want to learn more about and from Hsieh you should read his book. If you’re interested in entrepreneurship and business leadership, it’s worth a read.

The next time you’re indulging in some retail therapy online or reading an e-commerce website like SPY, we hope you’ll think of Tony Hsieh. We wouldn’t be here without him.