This weekend, a trailer for an upcoming docu-series by Fox News host Tucker Carlson went viral, and it has to be seen to be believed.

Carlson is an extremely conservative Fox News personality and culture warrior, and the second season of his docuseries Tucker Carlson Originals premiered today on Fox Nation, the streaming platform of the Fox Corporation. If you’ve seen people on the internet discussing testicle tanning, among other discussions of modern-day masculinity, then you can thank Carlson.

An upcoming episode of Tucker Carlson Originals will be titled “The End of Men”, and its title is pretty self-explanatory. Its content, however, definitely requires explanation.

I promise you are not prepared for Tucker's latest montage pic.twitter.com/8tdvYTW2cn

No, this is not a parody, as many people initially assumed.

Did Carlson’s team intend for the promo to be so intensely homoerotic? Why testicle tanning? Why does everything have to be so stupid these days?

The trailer has the energy of the shirtless volleyball scene from Top Gun mixed with a propaganda video from an Eastern European dictator. Dire warnings about the emasculation of men are intercut with footage of rotting fish, sperm, men wrestling, crying babies, guns and so, so many shirtless men. 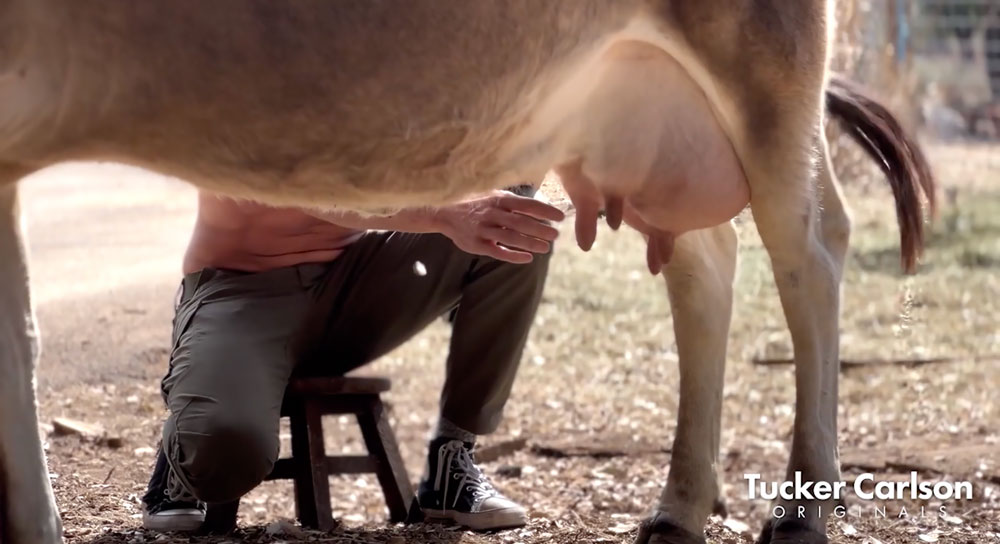 A screenshot from “The End of Men” trailer that shows a shirtless man milking a cow. Courtesy of Fox Natiion

No release date for “The End of Men” has been announced so far, but the first episode of the new season of Tucker Carlson Originals debuted on Monday, April 18, with new episodes dropping each Monday. The first episode, “The Suicide of Los Angeles,” can only be watched with a subscription to Fox Nation.

Because so many people have questions about “The End of Men” and testicle tanning, we learned everything we could about this phenomenon. We also reached out to The Tucker Carlson Show, and we’ll update this post if we hear back.

In the trailer featured above, an interviewer asks a confused doctor, “Would you recommend, uh, young men to tan their balls?” The doctor then responds, for all of us, “To what?!”

This trailer isn’t the only clip from the special that’s being passed around in internet circles on both the left and the right. In one excerpt, Carlson is seen interviewing fitness professional Andrew McGovern about testicle tanning, a practice that uses infrared light to tan your balls, a practice that some people believe naturally boosts testosterone levels.

In his new special on how to raise testosterone levels in men, Tucker Carlson’s guest suggests “testicle tanning” using infrared light as a “bromeopathic” therapy. pic.twitter.com/PirerBMRyr

The Joovv, the light therapy product seen in the documentary, has actually been featured on SPY.com before. It’s an at-home red light therapy device you can use on your entire body, not just your testicles, and is designed for both men and women.

While the evidence surrounding the health benefits of light therapy is mixed, we’ve never heard of using it on your balls as a way to jack up your testosterone levels. Apparently, it’s an example of “bromeopathy”, a term that’s also new to us.

Carlson notes that some of his viewers might think this method sounds “crazy”, but his viewpoint is that the medical community’s lack of response to “testosterone levels crashing” is “crazy.” McGovern notes that it’s “not crazy” for men to look for solutions and that testicle tanning is one viable option.

The jury’s still out on how much evidence there is to back up this practice (but we promise, we’re looking into it) and how many American men are rushing to the tanning salon for a very specific area.

Kid Rock was asked his thoughts on the practice on Fox News last Friday and responded with, “Dude, stop! Testicle tanning? Come on. I haven’t heard anything like that in a long time.” Rock isn’t exactly a model specimen of traditional masculinity, but he is a frequent guest on Carlson’s show.

Carlson responded by asking him to open his mind and consider the “many therapies” and “paths they’ve told us to take” that “have turned out to be dead ends that really hurt people, why wouldn’t open-minded people seek solutions?”

Rock responded just as confused as the rest of us. “I don’t know what the hell is going on in this world,” he says. “I’m not even sure if I understood that question. Some days I just want to stop this planet and get off.”

To be honest, this exchange with Rock seems like further proof that testicle tanning could be more of a marketing stunt than a genuine recommendation from Carlson. On the other hand, many conservative media personalities are known for pushing snake oil supplements on their viewers, and this is hardly the craziest news cycle to come out of that world in recent years.

As soon as a release date for “The End of Men” is announced, we’ll update this post. In the meantime, you can enjoy these extremely homoerotic scenes from the trailer. 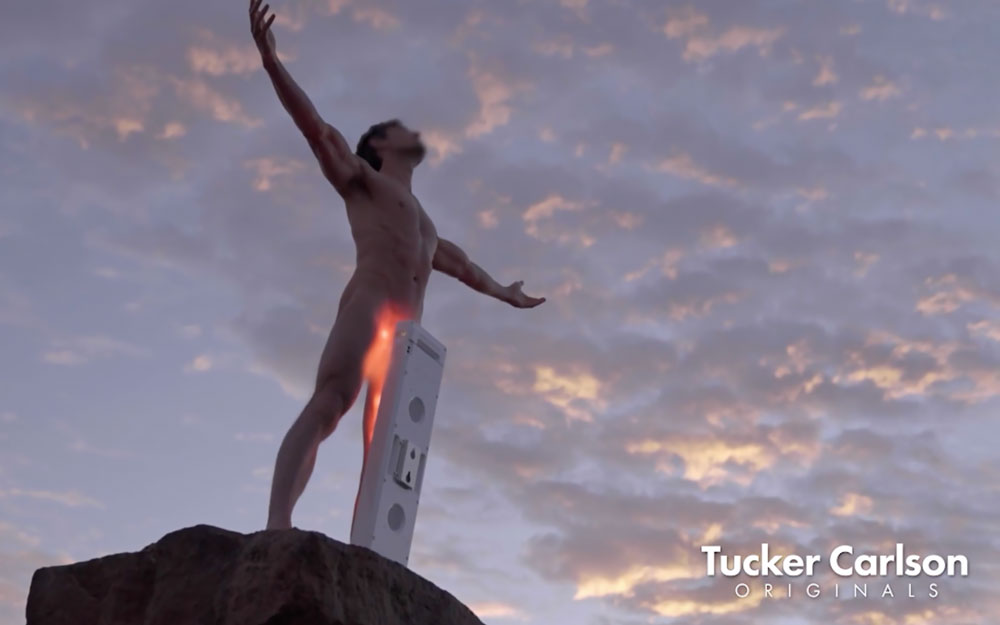 A shirtless man tanning his balls in “The End of Men” trailer. Courtesy of Fox Nation 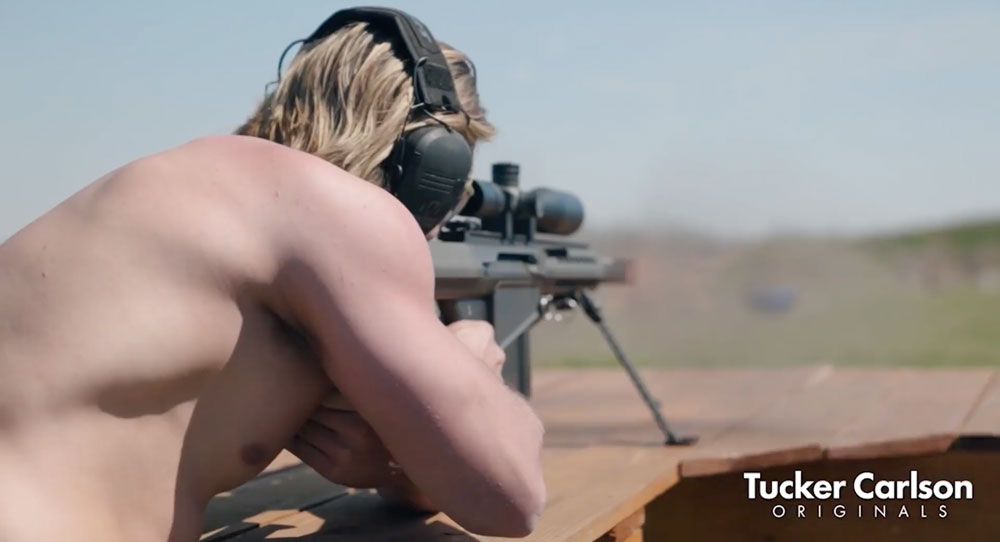 A shirtless man fires a gun in “The End of Men” trailer. Courtesy of Fox Nation 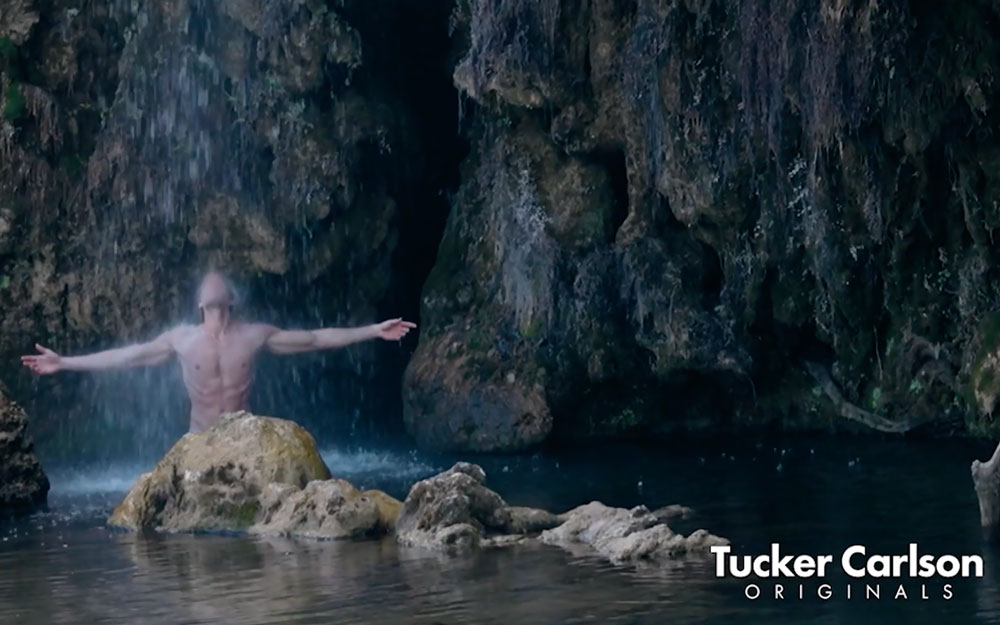 A shirtless man bathes in a waterfall in “The End of Men” trailer. Courtesy of Fox Nation 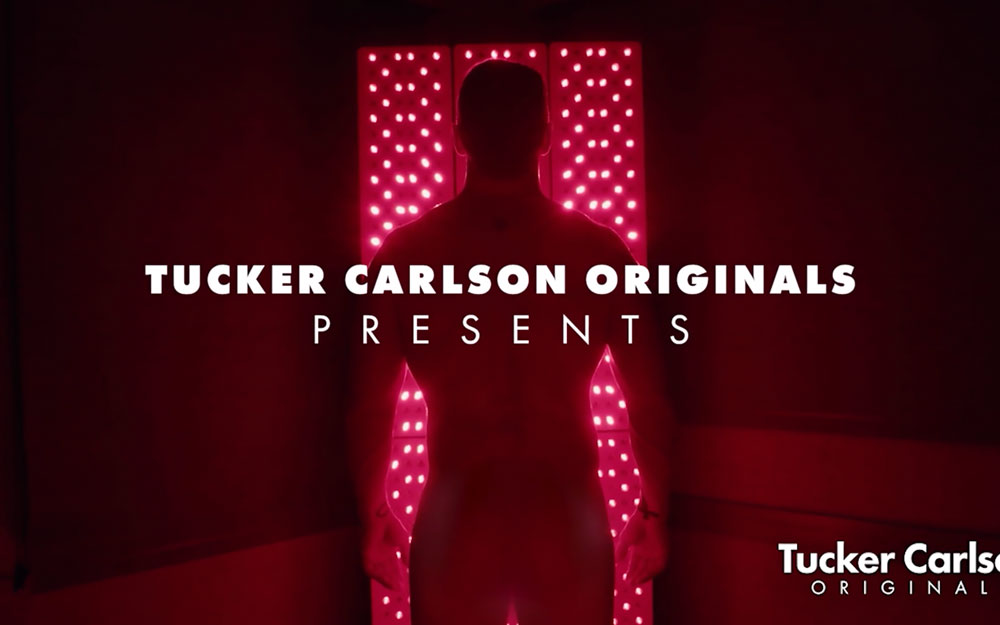 A shirtless man tanning his testicles in “The End of Men” trailer. Courtesy of Fox Nation 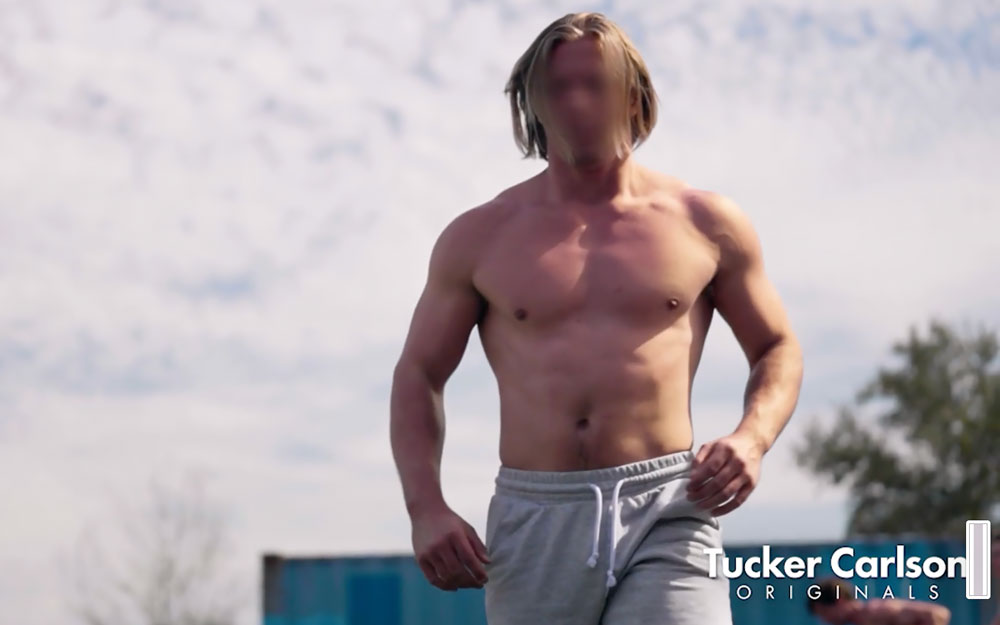 A shirtless man in “The End of Men” trailer from Tucker Carlson Originals. Courtesy of Fox Nation