Ah, beer pong. Singlehandedly one of the best drinking games in existence. Though you might think you left your beer pong days in the backyard of your college fraternity house, we know you’re longing for a good ‘ole game in your post-university years. You can almost hear the sound of a ping pong ball hitting the interior of a red solo cup as we speak. Oh, the nostalgia.

There’s no doubt that we’re bringing beer pong back this summer. But, instead of hanging at either end of that classic dudsy folding table, we’re seeing the game in a new light for 2022. We’re looking at spicing things up a bit with some unusual ways to play beer pong.

Beer pong is classic but it can get a bit stale — especially if you’re a frequent player. Sure, the cup-on-table method is the way to play, but it’s not the only way to play. Dare to be different, brother.

If your favorite drinking game and your go-to pool float had a love child, it would be this floating beer pong table from GoPong. This pong table creates the pool party of all poor parties by allowing you to play a little bit of beer pong in waist-deep water. Rules are the exact same you’re used to because water doesn’t change a single thing aside from making the game that much more fun. Each float comes with holders for 10 red solo cups on either side so you can properly play the game. In addition, there are four more holders along the table for friends watching the game. 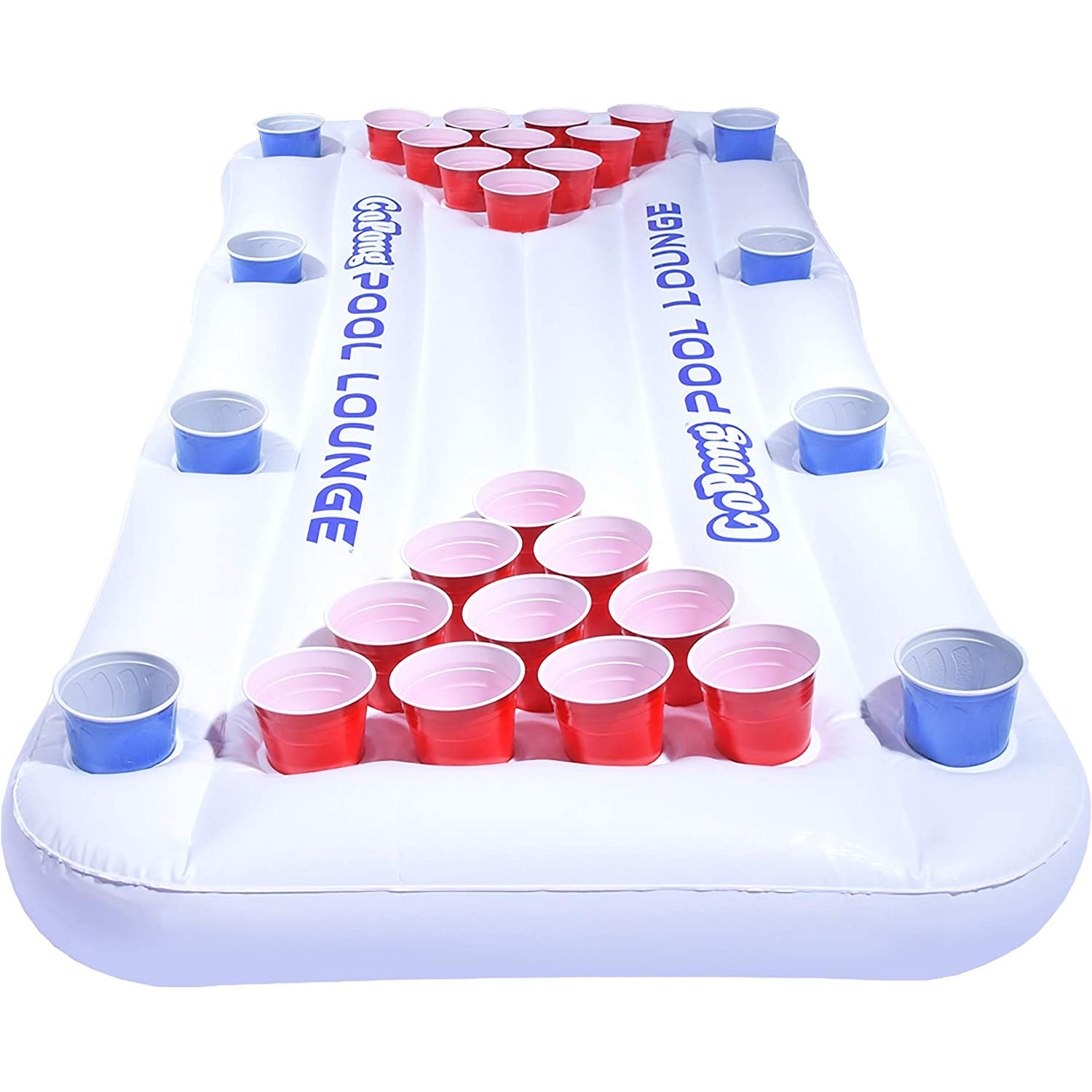 You’re going to have to fit a lot of beer in these buckets. Just kidding… unless… you want to? The Juegoal Yard Pong game is your classic game of beer pong oversized to sit in your yard instead of on your table. Fill each bucket with water or sand to weigh them down from the wind. Play the game as you normally would with red solo cups and a ping pong ball with these larger buckets and tennis or Wiffle ball instead. To make your life easier (unless you’re throwing a kegger) we just suggest you keep a solo cup nearby to sip from whenever your opponent gets a ball in. 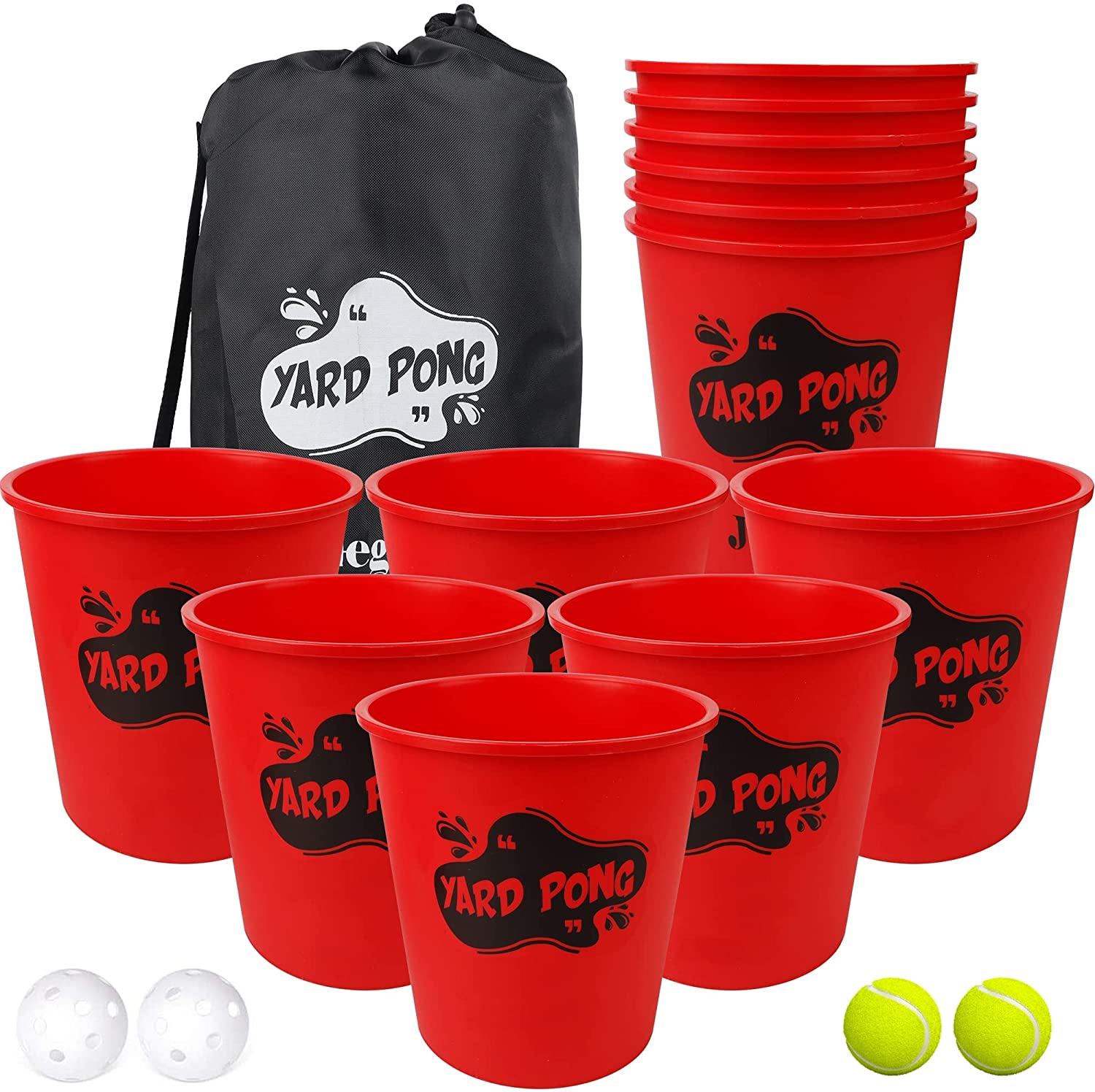 Typically, bleaches are never part of the actual sports game, but with the Stadium Cup Pong Set, bleachers are necessary for playing the game. This set turns your classic game of beer pong into an elevated competition with bleacher-lookalike red solo cup holders. It’s great for playing on the beach when you don’t have a table for a seamless game that won’t leave your cups blowing away with the ocean breeze. In addition, it’s great for playing on a tabletop for a bit of a switch-up to your average set-up. Just fill some cups with beer, place them in the holders and get playing. 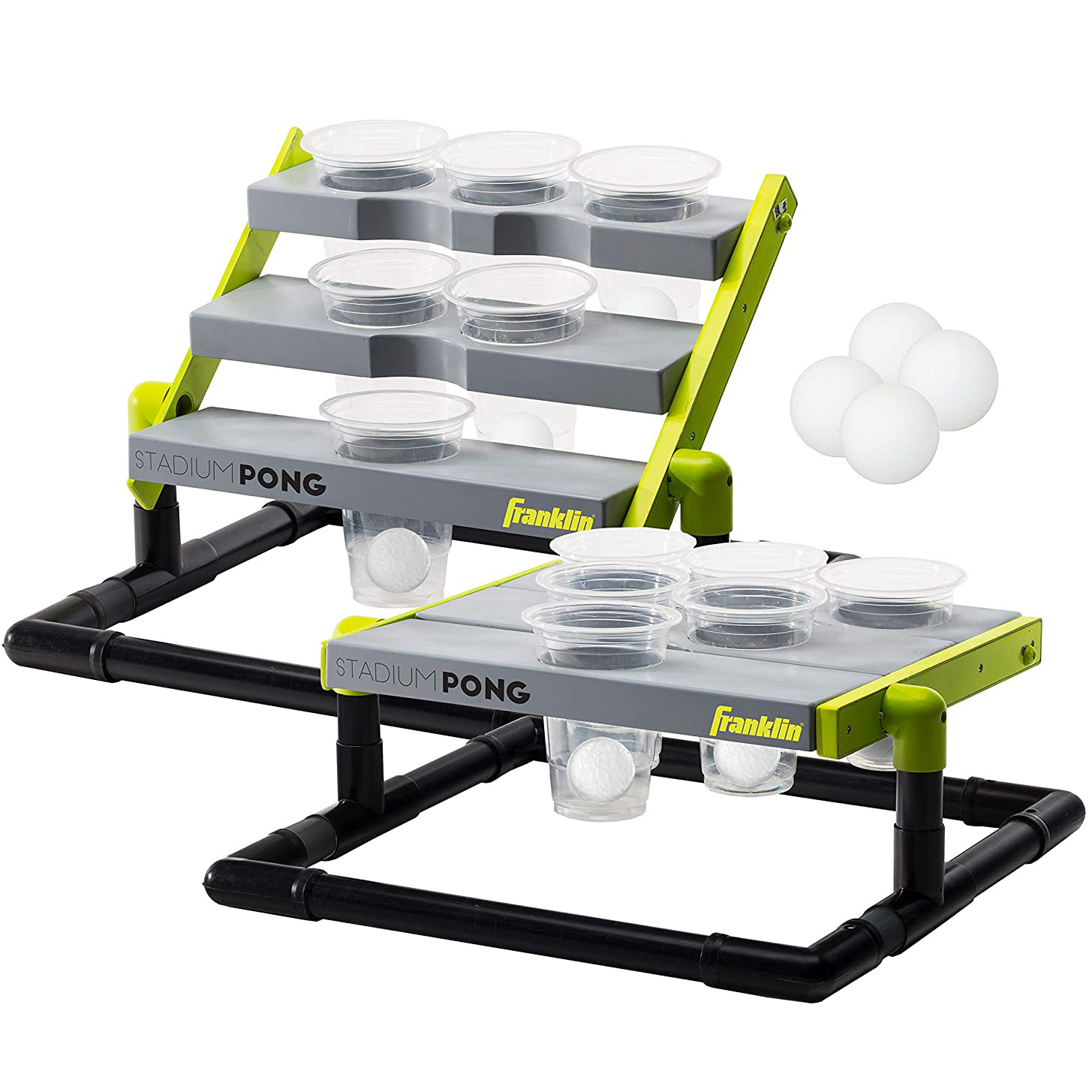 Whether you want to play with tiny little glasses of beer or some shots of liquor, this mini beer pong table from Uncommon Goods is perfect for you. Using a catapulter on either side, this game of beer pong flings tethered balls from one side to the other in hopes of landing in the opponent’s cup. This is ideal for college students age 21 and up living in smaller dorm rooms or simply anybody looking for a nostalgic knickknack version of their favorite drinking game. 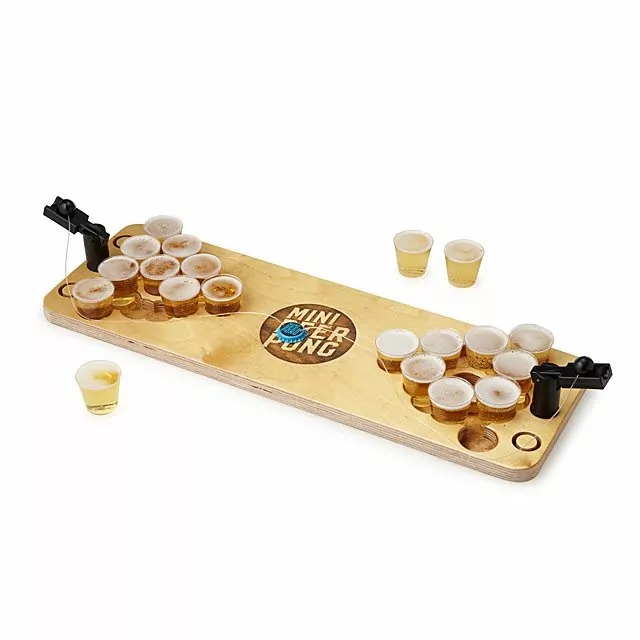 You don’t even need a table to play beer pong nowadays. Instead, Versapong is offering two triangular cup-holding platforms to get the job done in a more compact format. This “table” is so much easier to pack in your car than a folding table will ever be, making it an excellent bring-along for the beach, barbecues, camping trips and more that will always save you room. The two fold into a backpack for easy carrying to and from and are exceptionally lightweight so they won’t do too much damage to your back and shoulders. Best part of all? Because it’s not a table, balls won’t ever roll back for the other team to shoot left-handed. 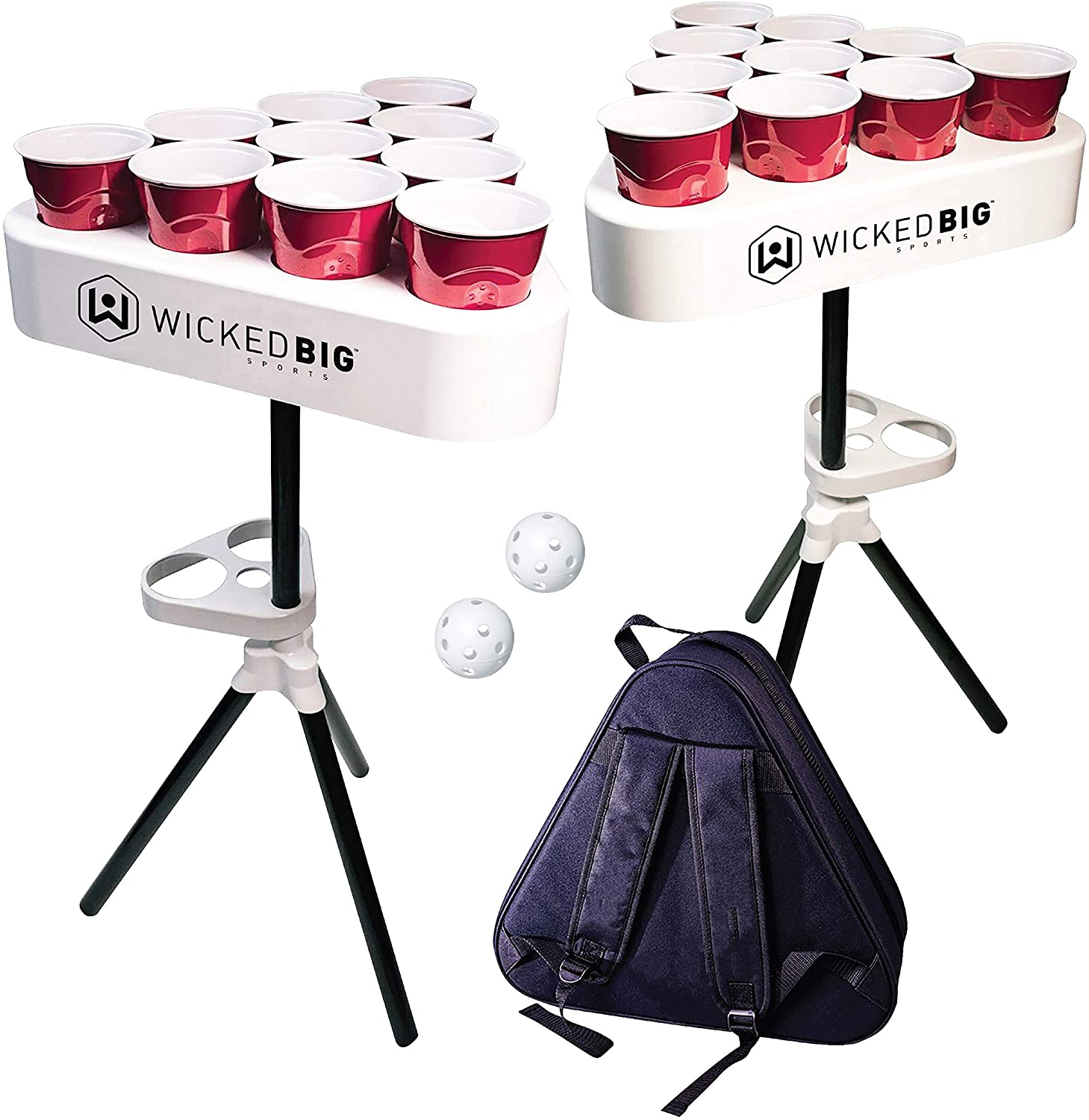 Last but not least, we have the perfect game of beer pong for all of you golf lovers out there. All players have to do is simply put a golf ball into one of the six holes carved out the same way you’d play golf regularly. Just, now, you have to drink every time your opponent makes one in. These holes technically can fit cups, but most cups are far too tall to properly sit right in the green. That said, we suggest you play the game without cups and keep one filled nearby for sipping. 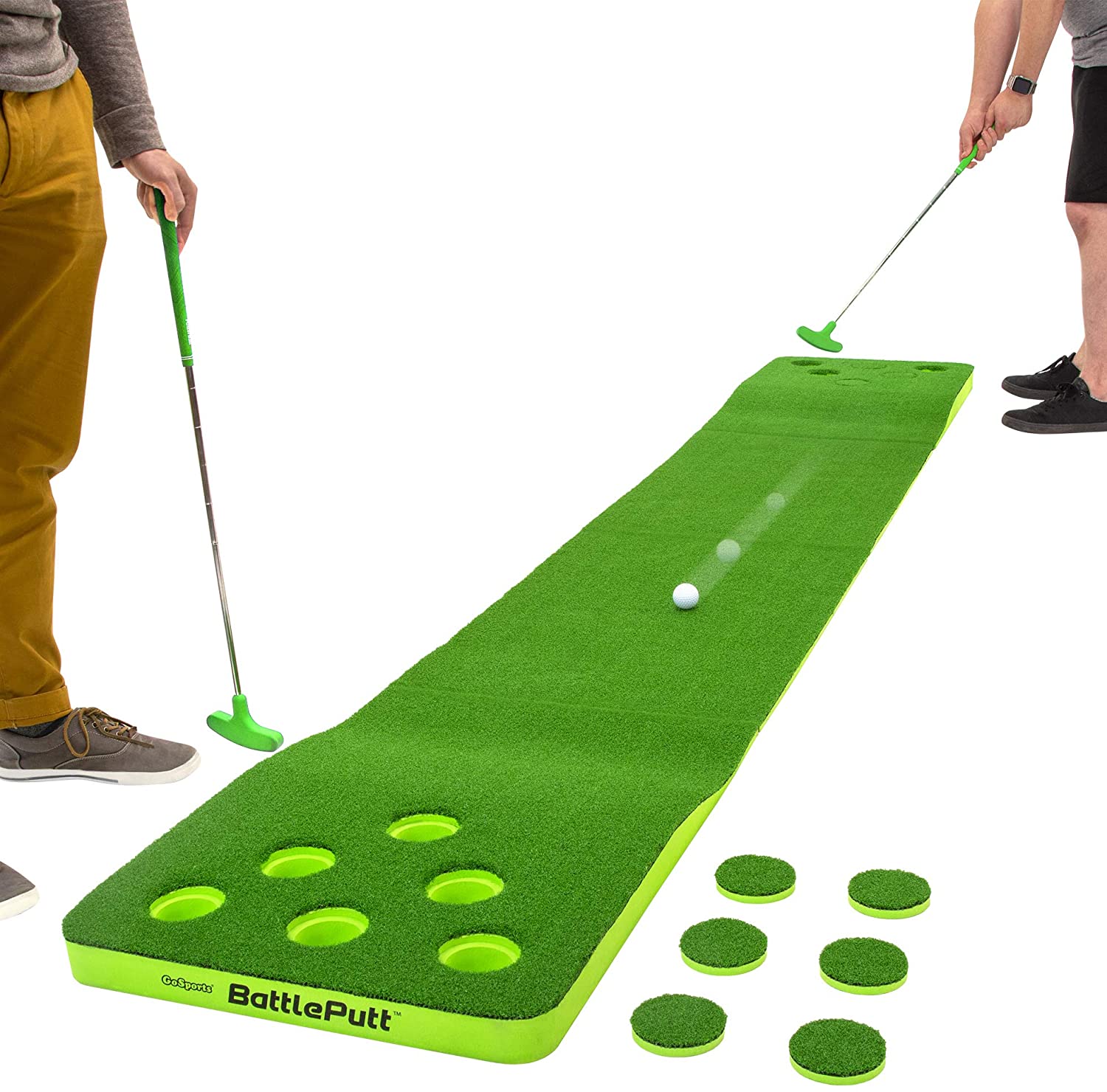