A few months into quarantine and — like the majority of us — I found I had absolutely nothing to do. I was overwhelmingly bored, perpetually stir crazy and I had finished every season of The Bachelor I could find for free online. I tried just about everything after my love-story reality television binge, like brushing up on my Spanish on Duolingo, dusting off the keyboard piano I drunkenly bought on Amazon Prime in November and even trying to watch the third season of Thirteen Reasons Why, which was the biggest mistake I made in 2020.

I was running out of ideas, so I figured it was time to jump into something I’d been putting off forever. I began devoting 99% of my time listening to new tunes and catching up on some albums I really wanted to soak in but never allowed myself to take the time to do.

I began to fall in love with various albums through my exploration. From Lana Del Rey’s smooth-sounding, somewhat sarcastic yet melodramatic Norman Fucking Rockwell to slowthai’s rambunctious, politically-driven masterpiece There’s Nothing Great About Britain to Jessie Ware’s mid-80s disco-esque and dreamy gamechanger What’s Your Pleasure? — I figured there was no other way to appreciate these works of art than to own them in the flesh. So, I decided it was finally time to purchase my very first record player: a Crosley Cruiser.

Do I blame quarantine, boredom and my credit card company solely for my mistakes? Yes, yes I do. But do I regret it? Absolutely not. This is the first time in my life I’ve actually collected anything, and the amount of fun I’m having surprises me every single day. 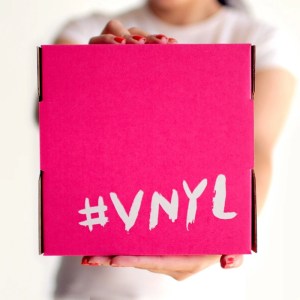 As I was growing my collection from home — because not a single record shop nearby was open to the public — I was looking at various retailers to supply my record habit. That’s when a targeted YouTube ad introduced me to VNYL. It showed a girl tearing open a pink cardboard package and pulling out three records she was shocked to have gotten. I was like, “oh, she drunk ordered these, it makes sense why she is acting so surprised”.

But, turns out she in fact did not drunk order them, they were hand-picked for her by VNYL‘s music curators based on her music taste. I knew then and there that I had to get in on the fun. I headed to VNYL‘s website and began creating my profile.

The interface struck me as incredibly straightforward. I was given the option to link my Spotify account, which I did, so the curators were able to see who I was constantly listening to. If you’ve got a Discogs account, you can connect that too so the curators can track which vinyl records you already have in your collection. After this, I went ahead and filled out a little survey detailing my favorite artists and genres, which records I would love to add to my collection, which records I already had and any artists whose records I didn’t want to own. I told them please, for the love of God, I do not want anything by Ed Sheeran.

After this, I was told to pick a “vibe.” Truthfully speaking, I wasn’t entirely sure what a “vibe” was and I don’t even remember what was listed, but I remember that they were very specific to artists I either had never heard of or didn’t like. There was a vibe option that seemed pretty vague and non-artist specific, so I went with that one.

With everything filled out and completed, I had nothing to else to do but wait.

Opening My First Shipment of Records

It took about three-ish weeks for my records to arrive, and at this point, I had added SO many more to my collection. I became nervous they had gifted me something I now already owned. One thing I realized when skimming their FAQ was that they do not do returns. They suggest if you receive a record that you already have, donate it or give it to a friend. But I didn’t want to donate anything, I’m greedy! So as I opened my hot pink package, I was flushed with nerves.

I closed my eyes as I pulled out my first record because that’s what I saw the girl in that YouTube ad do and I wanted to get the full experience. When I did, the first thing I grabbed was a matte record with a woman in red walking down the side of the mountain. It was Reward by Welsh musician Cate Le Bon. I didn’t know much about her, but once I stuck the needle on the LP I noticed that I actually recognized the first song, titled “Miami.” I truthfully have no clue why I know it, but it’s a beautifully jagged hymn that really exemplifies solitude and loneliness. I knew I was going to love the rest of the record, and I did. The work brings you to almost a sort of fantasy world that doesn’t escape even after you turn it off. It’s very alluring and gorgeously crafted. VNYL was off to a good start. 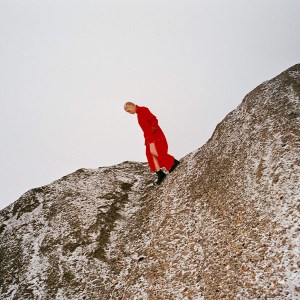 Next up, was another matte record featuring what looked like a painted seascape depicting where the ocean meets the sand. It was Pure Mood by Ringo Deathstarr. It’s probably time for me to mention that with the three records, you’re given a little handwritten note from your curator explaining why they chose each record for your style. I specifically remember that this one was chosen for me given how many times I listened to Titanic Rising by Weyes Blood, which is one of my favorite albums of all time. My curator explained that the albums had a similar vibe, but I absolutely disagree. Pure Mood isn’t really a pure mood at all, it feels to me much more like an unwarranted pattern of moods that exist throughout life itself. It’s somewhat all over the place yet in the best way possible if that makes any sense. It doesn’t create a world the way the previous album was able to, but it’s generally a vibey record to throw on in the background that has it’s chill moments and almost metal-like occurrences. I’m not upset with it at all. 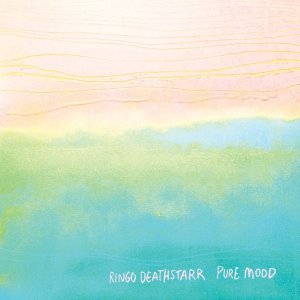 Before I reached for my last record, I began to wonder whether or not VNYL would actually give me anything I either asked for or listed as some of my favorite artists. I thought at least one of them would be something from someone I knew.

So, I grabbed my last pick, which was much more in your face with what it was considering the black text laid over a blue background. It was Wavves’ newest record from 2017 titled You’re Welcome. I was excited because I knew an older song from Wavves, but I didn’t list them at all in the survey I filled out. That being said, I hadn’t ever heard of this album at all. Upon listening, it felt like it was made by one of those high school garage boybands that never left the garage but somehow eventually did. Although it was released in 2017, it feels pretty dated, as if it should’ve been released in 2006. If you’ve ever played a Tony Hawk video game, this album feels like it would have been on the soundtrack in the background when you’re creating your character. Even though all of that might make it seem like I hate this LP, I ended up really loving it. 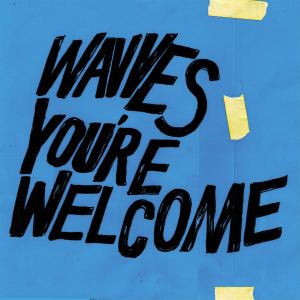 You're Welcome by Wavves

VNYL was an awesome experience to immerse myself in. I had so much fun creating my profile and the anticipation whilst waiting for my surprise LPs to arrive was exciting. Now that I’ve had some time to sit on and dissect each album, I’m immensely happy with what I got. I’m not going to lie, toward the beginning, I was a little disappointed I received nothing I had actually requested, but I believe my curator did a phenomenal job picking my brain to help me discover three new albums I otherwise would have never listened to. Will I do it again? Hell yeah.

If you’re a music lover looking to get in on the fun, VNYL has various subscription options to choose from. You can do a one-time purchase which gets you three vinyl records, a three-month purchase which will get you nine records over the course of three months and a full year subscription which will leave you claiming 36 records as your own in the end. So, what are you waiting for? Get your next VNYL box today — you won’t regret it.

Oh, and by the way, I know some of you are judging me for owning a Crosley Cruiser, but don’t worry. Ya boi has officially upgraded to a Sony. So no judging!

Upgrade Your Vinyl Listening Experience With These 13 Bluetooth Record Players