It’s happening. After a long wait, House of the Dragon episode 1 is finally landing on HBO Max.

When Game of Thrones was at its peak in Season 7, it drew more than 10 million regular weekly viewers on HBO. It’s also the most-awarded drama at the Emmys, with 160 nominations and 59 wins. And unfortunately, it featured one of the most contested series finales to ever air on television, with nearly 2 million viewers even signing a petition for a redo.

So can you blame fans for being a little anxious now that the first of several planned Game of Thrones spinoffs is finally debuting? Well, the wait is finally over, as the prequel will officially debut this weekend on HBO Max. (You can also save 40% on HBO Max subscriptions this weekend if you sign up for a full-year subscription.)

House of the Dragon is a prequel series that takes place nearly 200 years before we meet Daenerys Targaryen, the fan-favorite character played by Emilia Clarke. Unlike the original show, in which we traveled that famous map as houses battled for the right to sit on the Iron Throne, this series takes place at the Red Keep, where the Targaryens are in full power and battling one another.

It’s a dramatized take on the history set out by A Song of Fire and Ice creator George R.R. Martin in his 2018 novel Fire & Blood. But there’s more you need to know about this Game of Thrones spinoff, including all the reasons to check it out — and why you may want to pass. Read on for our hot takes after we screened the first episode earlier this summer.

How to Watch House of the Dragon Online

At the time of press, House of the Dragon is scheduled to debut on HBO and HBO Max on Aug. 21. If you don’t have cable, you can grab an HBO Max subscription for $9.99 a month with ads or $14.99 a month without ads.

Wondering how to watch House of the Dragon for free? You’re out of luck, as HBO Max no longer offers a free trial.

1. There Are 17 Dragons in House of the Dragon

If watching the CGI dragons do their thing on Game of Thrones was one of your favorite reasons to watch, you will definitely be into the world of dragons featured on House of the Dragon. Co-showrunner Ryan Condal (who was also a self-professed GOT super fan before he got this gig) revealed during Comic-Con 2022 that this series features 17 dragons throughout its run. We’ll meet some of them in the first season and more if (when?) the series is renewed for future installments.

“This series begins at the pinnacle of the dynasty, the height of power and wealth and influence, with the most dragons they’ll ever have. It’s just before the bloom starts to come off the rose,” he explained.

Not only will there be 17 dragons, but each dragon will have different colorings, personalities and riders. You know how they say dogs kind of look like their owners? We envision it as that, only with Targaryens and their fire-breathers.

2. House of the Dragon Features Matt Smith As You’ve Never Seen Him

We know Matt Smith from his turn as the Eleventh Doctor on Doctor Who and his eerily accurate portrayal of Prince Philip on The Crown. And okay, we were even into his parts in Last Night in Soho and Morbius. This, however, is unlike anything we’ve ever seen from him.

If you thought Ramsay Bolton (Iwan Rheon) was shiver-inducing for how sadistic and cold he could be on Game of Thrones, or if Joffrey Baratheon (Jack Gleeson) turned your blood cold in the show’s earlier days… well, let’s just say Smith’s character, Prince Daemon Targaryen, would probably get along with both of those bad dudes.

Without giving too much away, this prince is in an extreme position of power when we first meet him, and also under the protection of his brother, King Viserys I (Paddy Considine). That means he can carry out some pretty dastardly tasks without the consequences that some other men may face for taking the same actions. So what we’re saying is, get ready for your next big love-hate relationship. 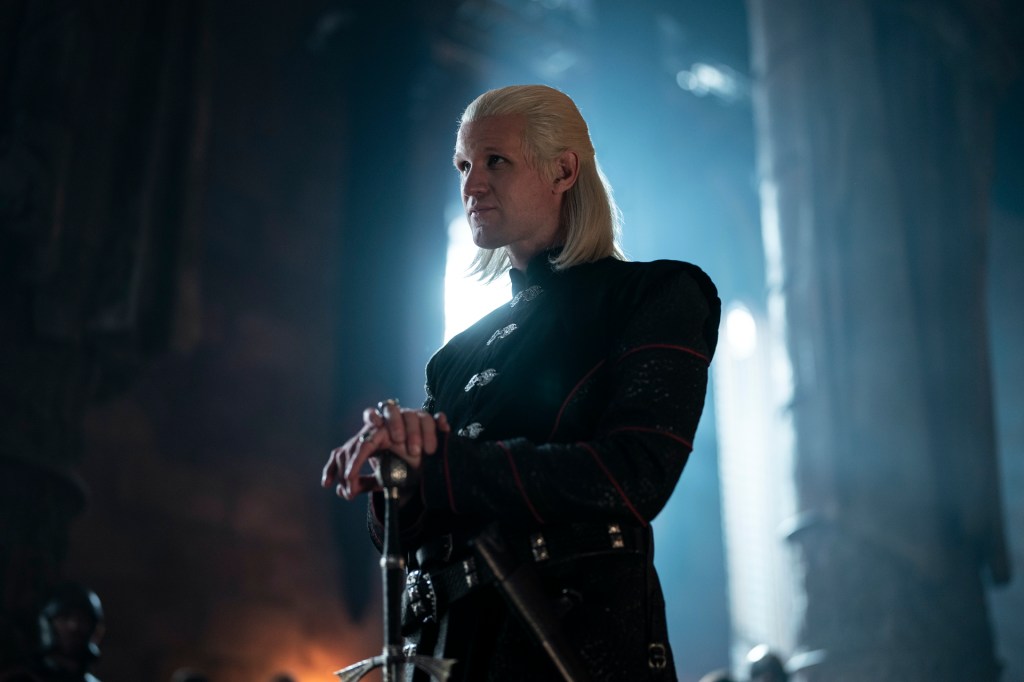 3. The Story in House of the Dragon Is Epic

As we mentioned, House of the Dragon is based on Fire & Blood, a tome so big and comprehensive that Martin once threatened a follow-up because he couldn’t stuff all the required information within. However, the story in that novel is more of a guidepost, as it was “written” from skewed viewpoints.

This show attempts to fill in those gaps and showcase what happened without veering too far from canon. That should appease certain loyalists who really hated the Game of Thrones ending, but… be prepared. Not only are some names repetitive and entirely too much alike (take Rhaenyra and Rhaenys, for example), but there is also a vast family tree to keep track of.

That could make this show a bit dense to follow, but then again, we’re of the mindset that the more background a character can have, the better. So we’re into it… for now.

The showrunners may be super fans, but no one knows this world better than the creator himself, George R. R. Martin. So it’s integral that he’s on board House of the Dragon as an executive producer. We know, we know. It also means the author is adding yet another project to his ever-expanding résumé, which means he’ll have even less time to devote to finishing A Song of Ice And Fire. (There’s still no official release date for the next installment, Winds of Winter, by the way.)

5. House of the Dragon Has Some Powerful Female Leads

According to the showrunners, House of the Dragon spans about a decade, so we’ll see past and future storylines intersect. To properly tell the story of two of the female leads, however, means role-splitting.

Princess Rhaenyra Targaryen (the woman who eventually becomes the first female heir to the throne and looks the most like Daenerys Targaryen) is played by Milly Alcock in the past and by Emma D’Arcy in the future. The other female character to keep an eye on is Rhaenyra’s bestie Alicent Hightower, played by Emily Carey in the early days and by Olivia Cooke as a grown-up.

These women are integral to the overall story and the eventual downfall of the House Targaryen, but we won’t spoil it any further. We will say that, so far, these two roles are the only ones being shared by actors. Everyone else is aged up and down as the story proceeds. 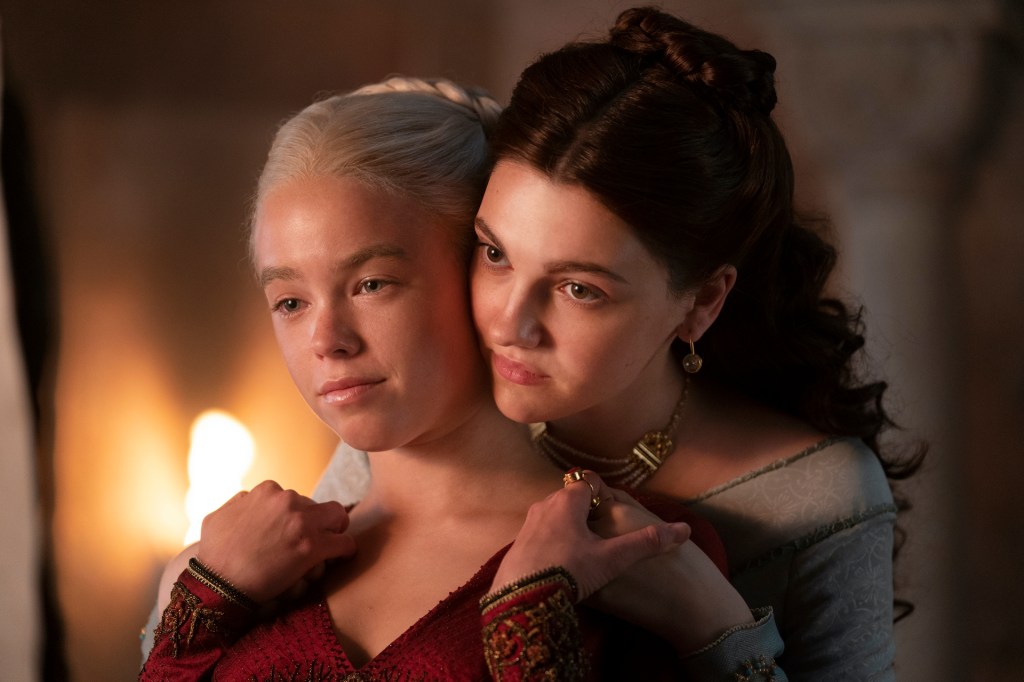 3 Reasons to Skip House of the Dragon

1. Game of Thrones Has Jumped the Shark

At this point, no one would be surprised if George R.R. Martin never finishes his popular fantasy book series. Fans have been waiting on the next book, The Winds of Winter, for so long already, and there’s no reason to think it will be hitting bookstores in our lifetimes.

On top of that, the Game of Thrones final season left a lot of fans soured on the entire universe, and it’s amazing how quickly the show went from a zeitgeist-capturing global phenomenon to an afterthought.

For fans disappointed by the ending of the original series, do you really want to go through that again?

2. Some House of the Dragon Scenes Are Quite Gory

If watching brutal and gory scenes isn’t your thing, that may be a good reason to skip this prequel. The first episode of House of the Dragon features a few notable moments that went above and beyond in terms of what they showed, to the point where we had a hard time sleeping after screening it.

That said, gore, blood and lots of exposition don’t bother everyone. We should point out none of those scenes involve sexual assault, something the original series came under fire for during its run. Although some early news out of Comic-Con confirmed House of the Dragon would showcase sexual assault if the storyline warranted it, the producers later confirmed that is not the case — there will be no “onscreen” sexual assault in the first season at all.

Still, we know what we’re getting into. With everything that’s going on in the world, is that really how you want to spend your time? Wouldn’t you rather watch a lighthearted comedy instead?

3. House of the Dragon Has a Lot to Live Up To

As we mentioned earlier, Game of Thrones had an epic run. It is one of the world’s most beloved shows, and how it was structured forever changed television. Because of that history, anything set in the Game of Thrones world that comes after has a lot to live up to. So far, we’re into the story and the overall premise. But whether this show can ever reach the same heights as its predecessor remains to be seen.

One thing is certain: The characters we already know and love are not present here. There are nods to the Starks, the Lannisters and some of the other notable families we followed for seven years on Thrones. However, this is very much a Targaryen-centered show, so adjust your expectations accordingly.

What to Watch in August: The 19 Best New Streaming Releases on HBO Max, Paramount+, Disney+ and Netflix