Yes, you read that right. The hit party game “What Do You Meme?” released an expansion pack just about anyone can get behind: What Do You Meme? Spongebob Squarepants Edition.

Spongebob has been a cultural icon far and wide for decades at this point. From hilarious quotes episode after episode to the recurrence of scenes made into modern online memes, there really isn’t any shortage of relatable Spongebob content any person of any age group can get a kick out of. For real, adults love Spongebob just as much as kids do. 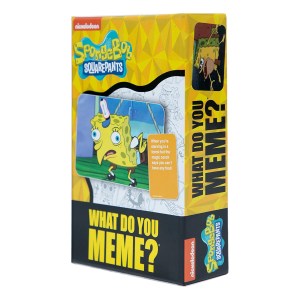 Courtesy of Amazon
Buy: What Do You Meme? Spongebob Squarepants Expansion Pack from Amazon $12.99
buy it

In light of the recent film “The Spongebob Movie: Sponge on the Run”, the makers of What Do You Meme? figured there was no better time than now to get in on some good ‘ole Bikini Bottom-themed meme-ory. For good reason, too, this expansion packed is filled to the brim with nothing but knee-slappers.

Inside, you can find thirty brand-new Spongebob-themed caption cards taking ideas from familiar within the series. Expect caption cards such as “when your dumb friend asks if mayonnaise is an instrument” and “when you’re ugly and you’re proud.” 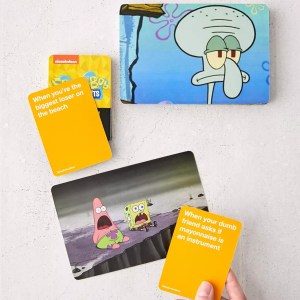 Courtesy of Urban Outfitters
Buy: What Do You Meme? Spongebob Squarepants Expansion… $13.00
Buy It

Additionally, the expansion pack also comes with fifty new photo cards which include popular online memes you might already be familiar with as well as other meme-worthy classic stills you might have forgotten about. Yeah, Squidward looking out the window as Spongebob and Patrick goof around outside is a photo card included. Don’t worry. 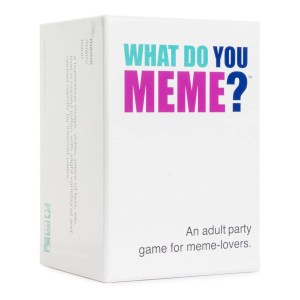 Simply shuffle the Spongebob-themed cards into the original What Do You Meme? playing deck and you’ve got yourself a hilariously relevant game you can play for hours and hours on end with your best pals. Hey, feel free to even take it to the next level and turn the game into a drinking card game, because everything is a little better with booze included.

Right now, you can buy the What Do You Meme? Spongebob Expansion Pack just about anywhere. From Amazon to Urban Outfitters, the pack goes for just around $13 at most online retailers, which is completely worth it given the amount of fun you’re going to have.

The 20 Best Adult Games for Your Next Game Night