The beauty of Wordle is in its simplicity: one word a day, five letters, six guesses. But even though Wordle is a word game, it’s also a numbers game. Players are known to obsess over their stats, which are available under the bars icon at the top of the page. Your stats include how many games you’ve played, your win percentage, your guess distribution and the all-important streak, which tells you how many games you’ve won in a row. These stats are notorious, though. Since Wordle data is stored locally in your browser, you can lose your streak if you play on a different device or clear your browser data. Now Wordle’s owners, The New York Times, is offering a way for you to save your games.

This Wordle update was rolled out July 13, though not all players had access to it immediately. It’s one of only a handful of minor changes the New York Times has made to the popular browser game since acquiring it in January 2022 for a reported seven-figure sum. The Times has kept the game free and available in browser, unlike their other popular word games like Spelling Bee (which is available with a Times subscription through their apps). Changes to Wordle included trimming down the dictionary to cut out overly complicated words, foreign spellings and potentially offensive words, and minor tweaks like promoting The Spelling Bee at the bottom of the stats page. But this Wordle update is the most significant change so far, and one most fans will likely appreciate. 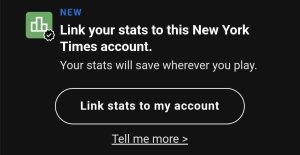 Under your stats, you might see this. Jonathan Zavaleta | SPY

Of course, it hasn’t all been smooth sailing since the Times took over, and there have been issues related to word selection. For example, “fetus” was the answer on May 9, shortly after the news of the leaked opinion overturning Roe v Wade. This was purely coincidental, but the Times attempted to rectify the situation by changing the word. The problem is that the word didn’t change for everyone, leading to confusion (I had “fetus,” but my friends didn’t). The Times released a statement explaining that “because of the current Wordle technology, it can be difficult to change words that have already been loaded into the game” and emphasizing that “At New York Times Games, we take our role seriously as a place to entertain and escape, and we want Wordle to remain distinct from the news.”

This wasn’t the first time the word of the day diverged for different users. In the early months after the Times’ takeover of Wordle, users got other answers depending on whether they were playing on the original website or the New York Times website. This might seem like a minor issue, but the social aspect of Wordle is what made it as popular as it is. Players can easily share their scores on social media or with friends, and the scores are cleverly represented through green and yellow blocks to avoid spoilers for anyone who hasn’t played that day’s game yet. These yellow and green squares also made it hard to know if everyone else had the same word as you, though this issue has since been resolved.

Fortunately, despite some hiccups along the way, The New York Times has stayed true to what made Wordle great in the first place, and this recent Wordle update is an improvement for anyone with a long streak. If you drop your phone into the ocean while playing word games on a kayak, at least you won’t lose your Wordle streak.

The ability to save your streak is also something of a mixed blessing. I was secretly relieved that I lost my stats when I recently got a new Samsung Galaxy phone because I would have a second chance at maintaining a 100% win rate. I’ve since dipped to 97%, which means if I save my stats, I’ll never be able to get back to 100%, and my failures will haunt me forever. So, at least for now, I’ll hold off on linking my account and accept that in our impermanent world, nothing — not even a Wordle streak — can last forever.

Love Wordle? Here Are 8 Games to Play After You’ve Finished Your Daily Puzzle