Besides toilet paper and beans, there was another thing people were buying a lot of right from the start of the pandemic — alcohol. At first, it was treated with a level of bemusement, but as the pandemic wore on, public health experts expressed genuine concern. The tide may be turning, though. As many news outlets reported, alcohol sales have actually taken their first dip after a yearlong high. Whether people are actually drinking less or simply buying less as a result of bar and restaurant reopenings remains to be seen. But the trend toward abstaining or at least cutting back is real, and it actually predates the pandemic. For the past few years, a bevy of companies have cropped up that offer nonalcoholic or low-proof concoctions.

Kin Europhics was launched in 2018, and makes a variety of zero-spirit drinks. Haus, launched in 2019, focuses on aperitifs with a line of low-proof drinks. The most well-known of the bunch is Seedlip, which produces a range of what they call “non-alcoholic spirits.” Pretty much all of these brands shy away from marketing drinks that are analogous to any specific spirit. Seedlip’s offerings include “Garden 108,” and Kin makes drinks with sort of bohemian sounding names like “High Rhode” and “Dream Light.” Ritual Zero Proof, founded in 2019, stands out from the pack by openly marketing their non-alcoholic drinks as “Gin Alternative,” “Whiskey Alternative” and “Tequila Alternative.” And thanks to Ritual sending me a sampler for review, I had a chance to try all three.

Ritual Zero Proof’s concoctions are specifically made for mixing, but to get the full experience, I wanted to try them in a few different ways to get the full experience. I tried shots, mixed drinks and a few classic cocktails. They’re meant as a 1:1 replacement for liquor, so I whipped up the mixed drinks and cocktails the same way I would with alcoholic spirits. Here’s what I thought. 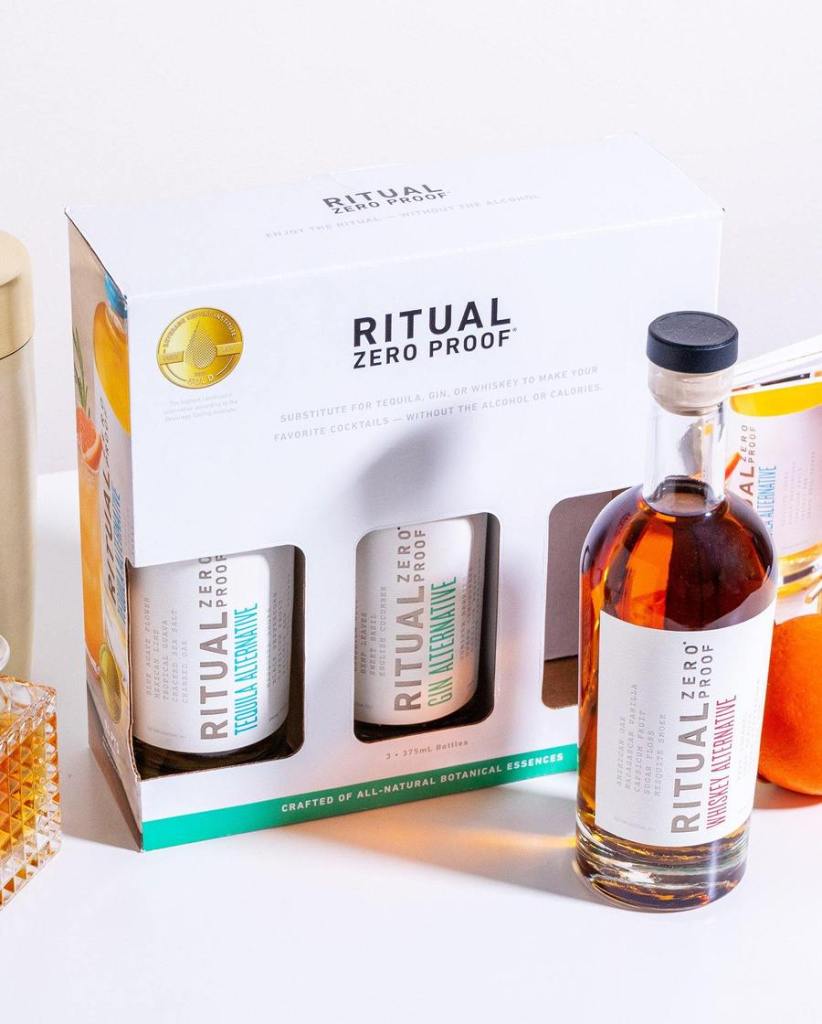 It’s unfair to judge Ritual Zero Proof as a shot because they’re simply not meant to be consumed that way. But in the interest of being thorough, I wanted to try each. Frankly, they’re flat-out gross on their own. The way Ritual tries to replicate the kick of alcohol is with spice. The gin and whiskey alternatives have green peppercorn, and all three use capsicum fruit. When you take a shot of gin alternative, for example, you’re hit with a mildly herbal flavor, followed by a kick of spice. It’s not as nice as it sounds, though. It tastes a bit like you got unlucky in the drinking game Arrogance and had to drink the cup that someone decided to fill with random spices from the kitchen.

For the mixed drinks, the results were, well, mixed. I made a gin and tonic using Q tonic water and it simply didn’t taste right. For the tequila alternative, I mixed a Paloma, which I made using Squirt grapefruit soda and the tequila alternative. Altogether, the alternative Paloma was pretty decent. The spice came through nicely, providing enough of a kick that I did feel like I was drinking a mixed drink even though I knew I wasn’t, and it mixed well with the sweet soda flavor from the Squirt. 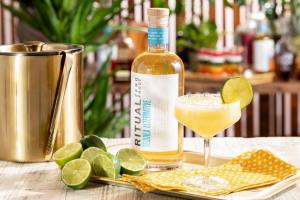 Finally, for the whiskey alternative, I went with my personal favorite whiskey highball combo, the whiskey ginger. The Ritual whiskey alternative with Canada Dry ginger ale was better than the gin and tonic, but it still wasn’t quite right. The mesquite and caramel flavors were too prominent, although the spice, when not presented on its own, did add a pleasant kick to the sweet ginger ale.

When picking which cocktail to make, I wanted to choose a traditional, emblematic cocktail. In short, I wanted the most obvious cocktail for each spirit category. The choice with tequila was obvious — I had to make a margarita. I like mine with a 2:1:1 ratio, rather than 3:2:1 (I made some 3:2:1 margaritas for two of my friends once and they ended up falling asleep on my couch. Three ounces of tequila is just kind of a lot).

I made a Ritual margarita with two ounces of the tequila alternative, one ounce of fresh lime juice and one ounce of triple sec. As it did with the Paloma, the spicy flavors in the Ritual balanced nicely with the tart lime and sweeter orange liqueur, and the agave and oak flavors came through enough to feel like I was drinking tequila. All in all, the tequila alternative performed pretty well, both in a mixed drink and in a cocktail. 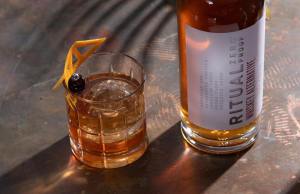 For the whiskey cocktail, I went with the Old Fashioned. I added two or three dashes of Angostura bitters, a little bit of simple syrup and two ounces of the Ritual Zero Proof whiskey alternative to a glass. I dropped in a large ice cube, gave it a good stir, and then added a slice of orange peel. Since the Old Fashioned is mostly whiskey, it’s really a showcase for the flavors of good bourbon. In this case, I was again getting a lot of the smoky mesquite, sweet caramel and vanilla and spicy pepper flavors, which didn’t fully blend on my palette. Instead, these notes hit my tongue in separate waves. The bitters and orange helped, but it was still too odd of a flavor.

Choosing a gin cocktail was a little less obvious, because, unlike a margarita or Old Fashioned, there’s no one gin cocktail that can be easily pointed to as the definitive gin drink. I felt that the best bet was a Negroni, a classic, balanced cocktail that I hoped would be a good way to let the various flavors of the Ritual Gin Alternative shine. I swapped Gin for Ritual 1:1, and made a Negroni with the most traditional method, using one ounce of gin (in this case, Ritual Gin Alternative), one ounce of Campari and one ounce of red vermouth (I used Martini and Rossi) and a slice of orange peel. The resulting cocktail was surprisingly satisfying — the classic bittersweet herbal flavor of the Negroni still shined, while the Ritual offered a little of a spicy kick in addition to its herbal ingredients like basil and cucumber.

Ritual Zero Proof, as the name suggests, is billed as a way to still enjoy the ritual of a nightcap or after-hours drink without the bad stuff that booze brings. And there’s a simple pleasure in making a cocktail, even if you don’t feel like drinking booze. Making one with Ritual lets you do that. The best results were with the cocktails, which on balance performed better than the mixed results of the mixed drinks and the plainly bizarre flavor of each drink on its own.

The major problem with the cocktails being better than the mixed drinks is that none of them were zero-proof anymore. Sure, the Ritual margarita was a lot lower proof than a regular one, for example. But the triple sec I used has 15% alcohol by volume (ABV). If you use Cointreau with the margarita, you’re getting 40% ABV, which is the same as most spirits. As for the ingredients of a Negroni, Campari has 24% ABV, and the vermouth I used has 15% ABV. 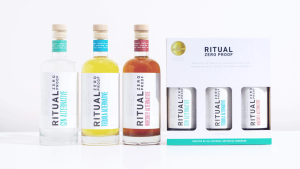 Angostura bitters, a key ingredient in an Old Fashioned, has 44.7% ABV. Admittedly, you only need to use a couple dashes of it, but the throughline is the same — none of the best drinks using Ritual were zero proof. This is fine if you’re simply cutting back, but it may be a problem for something like Dry January, if you’re pregnant, or any time when you can’t have any alcohol.

Suffice to say, you might have a different experience with these drinks. For their part, The Zero Proof, a website that specifically writes about non-alcoholic drinks, made their own take on an Old Fashioned. Their take was that “overall, it’s excellent,” while I felt that the Old Fashioned was the worst of the three cocktails I made. Ritual certainly takes an innovative and bold approach to the zero-proof drink market, and I have to respect them for trying to make low-proof and zero-proof cocktails possible. But as for me, I’ll probably stick with an Arnold Palmer for days when I’m not drinking.

The Best Non-Alcoholic Beer for Quenching Your Dry-January Thirst